Well, I have all the achievements now except this one. It's boggling me because you HAVE to drive 2200 KM without using a Ferry. I have pretty much discovered by traveling to all the corners of Europe and checking load distances that unless you go into the UK from way down southeast, you do not get to drive 2200 KM. The only way to accomplish this is to use an add-on map which adds more distance.

However, I have gained all other achievements by using all default ETS2 resources with the only mods being accessories/eye candy for my truck. So, what am I missing? Obviously it is something obvious since I searched this forum and everyone else has already accomplished this achievement (or they'd have posted here as well), so I am the only one who is having this issue.

I definitely verified that using the ferry nullifies the achievement regardless of route distance, since I tested this on a job that paid me over 300,000 Euro and the distance of the route was 2,500 km
Fae
Driving Instructor - CDL Class A
Safety First! G.O.A.L.
Proud to be a Trucker Against Trafficking
Top

you ca n use train

My World of Trucks Profile
Top

You can use ferry, this condition has been removed before releasing the update.
I collect weird games and tweet weird things
Top

I would have just extended my route a bit. Instead of a direct point A to point B drive by the most direct route available, take the "scenic route"...
You can call me Ax

I'll try a scenic route, but from what I understand the condition is that the route has to be the MINIMUM distance plotted, but I will try.

Basically last night I went the maximum min distance route available - a route between Debrecon (far lowr right of the map) to Aberdeen (far upper left). The route by itself was 2,530 km, so I drove it. The game did give me the "Long Haul" achievement for that run, but did not give me "Profit Hunter". However I think the mistake was I followed the route precisely. As Timmy said, you might be able to use the Ferry, but the game only credits for actual DRIVEN distance, so i am going to go back in my auto-saves and run the route again, but this time take the train down south and that should add on that extra couple hundred km I need to get the achievement.

Good thing I have today off from work LOL.
Fae
Driving Instructor - CDL Class A
Safety First! G.O.A.L.
Proud to be a Trucker Against Trafficking
Top

Gah! This time drove just a little over 3000 km - I forget what the income was but it was between 200/300k Euro. Took the train, the trip was Aberdeen back to Debrecon. No Achievement. So either my account is glitched or the default map is just not big enough for this one. I am going to just install TSM. That one has plenty of room to maneuver without taking any boats or trains.
Fae
Driving Instructor - CDL Class A
Safety First! G.O.A.L.
Proud to be a Trucker Against Trafficking
Top

Definitely works. Mind you, this was on my testing profile so i have my economy mod and i didn't even start the truck engine throughout this whole process. 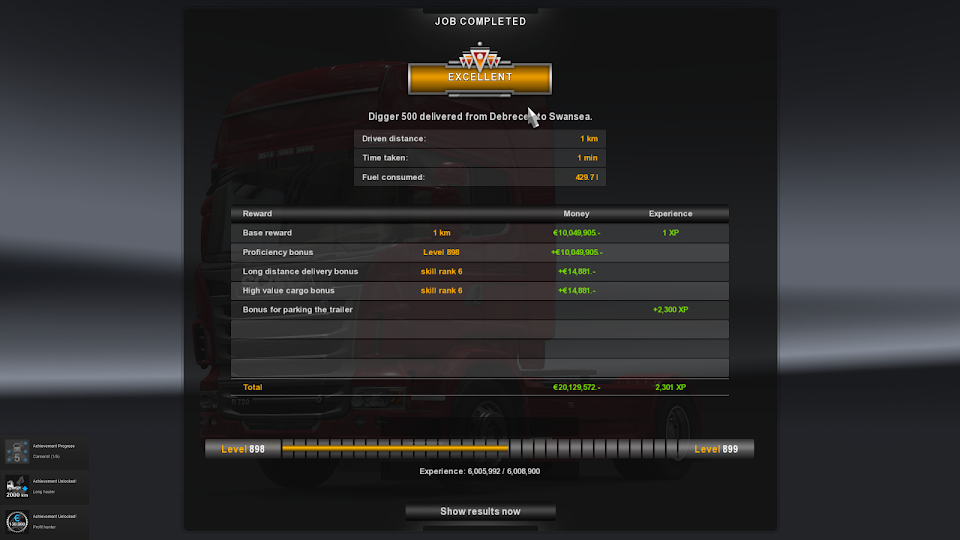 As you can tell, driven distance has NOTHING to do with it. Only job distance.
The hardest bit was getting a job that has 2200 km+, "g_set_time" helped here.

I got it just now, finally. Odd thing is I took a shorter route just because it was a trailer I wanted to pull and bam! achievement.

I wanted to bust out all achievements on the default map before loading up my updated maps for ETS2. Not sure why - figured I'd just do it for the challenge. This one was a bugger, though. Not sure why it credited me on a shorter route that I bee-lined on as opposed to the longer routes even with me detouring around the ferry. My theory is the achievement is based on the initial stats. Example, the two cities furthest apart on the map are Debrecon and Aberdeen, yet whenever I looked at loads between those two cities the stats stated only 2000 km approximately were driven, with 500-ish being on ferry. I still drove that one but detoured way down south to catch the train, and at the end even though the stats said I drove almost 2500 km I didn't get credit on Steam. This last route was right at the borderline when i picked it up - Sheffield to Kocise - and the job stated 2250 km driving and 60km train when i picked up the load. I figured I may as well since I was tired of driving the other route, and it credited me. LOL. So it must be the INITIAL stats when you are looking at picking up a load that figure in, and detours, etc. have no reflection on it.

Either way - got it - happy - glad my game isn't glitched somehow - and onward I go back to modding my interiors. The Scania's 75% done so far.

EDIT: Cadde I saw your reply right after I posted this. Yup - that even more proves my theory that it is initial stats and not actual driving done. hehe. Still glad I drove it though. I managed to clear the board with no game-altering mods

Now it's time to go mod-happy on my other profiles. Hee hee.

So yeah if anyone else encounters confusion here, remember when picking your load to ignore total distance and only focus on the "land distance" stat before bothering.
Fae
Driving Instructor - CDL Class A
Safety First! G.O.A.L.
Proud to be a Trucker Against Trafficking
Top

Axel Slingerland wrote:I would have just extended my route a bit. Instead of a direct point A to point B drive by the most direct route available, take the "scenic route"...

Axel i don´t think that works...is your inicial count...you can go around the world it will not give you, if you made unnecessary km´s.
Wich is personally think is fine

My World of Trucks Profile
Top

I know it was old topics but anyway....
If I do always Quick order and if I get more DLC's (France, Italia, Scandinavia, Heavy Cargo etc.) can I get it or need own truck?
Top
Post Reply
13 posts