Is it possible or not? You gave d3d11 renderer to Win build which is cool but OGL renderer performs incredibly bad. Won't you do anything about it?
Top

At least they added the new antialiasing also to the Linux port... but yeah, please SCS update us on the tech upgrade status on Linux side.
Top

@Petr is probably the right person can answer this. Performance wise it is really in a bad shape for now.
Top

Why bother with Linux?
Windows has the gaming world on lock so SCS will primarily cater to that OS. The fact that it runs on Linux/MacOS is a bonus.
YouTube Johndoe SiCKX - TWITTER - JD6 DISCORD

What exactly is it that doesn't work properly on your end? I'm playing ETS2 on Linux for over 2 years and never had a poor performance with OGL, quite the opposite actualy. While on Windows I can't play on Ultra settings with 400% scaling because the game starts breaking up and stuttering, I CAN play with these settings on Linux without any trace of fps drop or stuttering.
OS: Arch Linux
CPU: Core i7-4770
Memory: 32GB
VGA: GTX 1050 Ti 4GB

It stutters in a weird way. Just use this hud to see frametimes. Even at vsync on- compositor off situations it hitches.

Oh , and also framerate literally tanks on a city centre or where there are more than 5 vehicles at the screen at the same time.

Have you tried running the game with Proton? I saw this thread on Reddit and decided to try it.
I get much better performance with Proton/Directx11 than OpenGL.

I also get some FPS drops in a large intersection area, even if there are few cars only, but rest of the game run buttery smooth at 3840x2160@60Hz and 150% scaling.
Top

Leopard- Linux wrote: ↑
15 Mar 2020 16:30
It stutters in a weird way. Just use this hud to see frametimes. Even at vsync on- compositor off situations it hitches.

Oh , and also framerate literally tanks on a city centre or where there are more than 5 vehicles at the screen at the same time.

I was going to say you have a bad PC but then I saw the last line, so that's not the case.

Altough, if it's a laptop, you can't expect a perfect performance from it, no matter what hardware.
My computer is weaker than yours (except for the random access memory) and the game runs just perfectly! i7-4770, 1050 Ti, nvidia driver is the same as yours, kernel version is 5.5.10 and 32GB RAM. ETS2 is with Ultra settings (only grass is disabled bc I don't like it) and scaling is 100%. Since VSync is on, ETS2 runs with 60 FPS all the time, no matter what is happening on the screen and how many vehicles are there.

May I ask what is your DE? If it's Gnome or Gnome based (like Cinnamon), try enabling flipping. But in order to see whether flipping is ON or OFF, first you need to enable an overlay while you play the game.

1. Open nvidia control pannel and set both "profiles" and "rules" like I have and then press "save to disk" button. 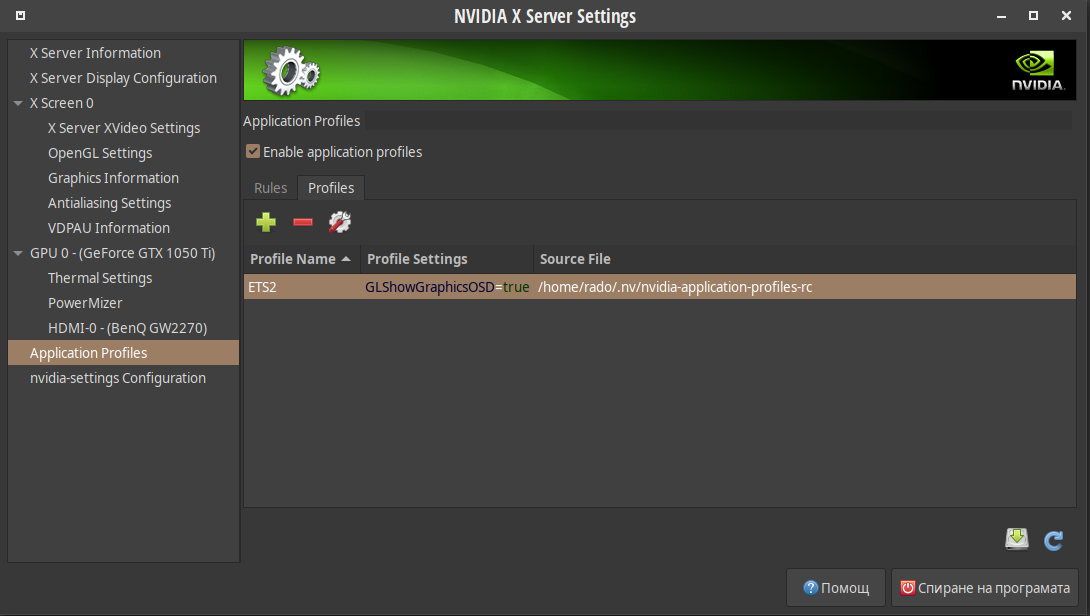 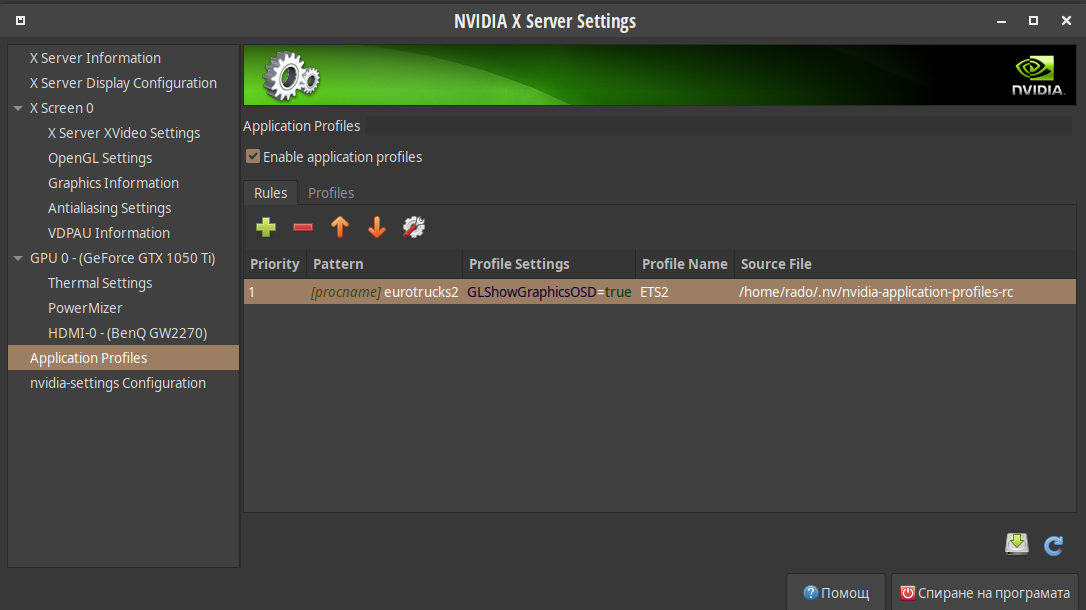 2. You need this file: https://drive.google.com/file/d/1jaz4pE ... sp=sharing It will set your video card to permanent maximum performance state (you'll see the difference when you run the game). It will also force the flipping option to be turned ON. In older version of the file you would be required to enter resolution manually but now it's set to "autoselect" which means the nvidia driver will automatically detect your proper resolution, so you don't have to edit anything.
Open terminal and type the following command BUT!!! before typing it, replace the asterisks with the name of your file manager. In my case it would be "sudo pcmanfm /etc/X11".

Copy the xorg.conf file from the archive you just downloaded and paste it in X11 directory. Confirm overwriting when asked.
3. Reboot the system.

If you did everything properly, when you run the game, you'll see on the top left corner something like this:

only instead of BLIT, it will say FLIP. FLIP means Flipping is ON, BLIT means it's OFF.

Now, there's one downside of all this, so my advice to you is keep the archive I just gave you. When the nvidia driver updates, it rewrites xorg.conf and you'll need to copy-paste the file from the archive over the updated one and then reboot again. I haven't found (yet) a working way to prevent nvidia from rewriting xorg.conf but the situation could be worse, so for now I'm OK with rebooting after each nvidia update.
OS: Arch Linux
CPU: Core i7-4770
Memory: 32GB
VGA: GTX 1050 Ti 4GB

I dunno if my expectations are so high.

My settings are ; literally everything maxed at 300 percent res scale. My res is 1920x1080. Only HDR is off because it looks like crap.

I get 52 fps average at cabin view with these settings , mostly locked 60 fps at camera number 2. ( I have v-sync on )

Once i get to some area with heavy vegetation or places like city centres it goes down to 43 fps.

Is it normal and expected or soemthing wrong here?
Top
Post Reply
12 posts