If the bridges are actually green in real life, they should stay green. We shouldn't have the ability to change the color unless a mod changes it. It makes programming and editing unnecessary for SCS.
My post are only thoughts and ideas. Don't assume it makes ATS.
Poll: Choose Next 2 ATS States
ATS Flatbed
ATS Special Transport
North American Agriculture
Texas Discussion
Top

Here are a few police vehicle liveries for the state of Wyoming: *Link is no longer active*
Last edited by Unknown# on 11 Feb 2019 16:40, edited 1 time in total.
Top

As someone going to school in Wyoming, I think there are a few big things that a DLC just wouldn't feel like Wyoming without.

These are the most important things I think anyone recreating this state should keep in mind:

1. There is a general feeling of open space.

Wyoming, despite being fairly large, is the least populated state in America! Where there aren't mountain passes, we have fast, sweeping country roads or freeways. Here's Streetview of WYO 487 going through ranchland between Laramie and Casper:

Notice the gradual turn. This road, despite being only two lanes, has a speed limit of 70 mph - for both trucks and cars! (Wyoming does not have seperate limits). Also notice the lack of other cars! I would suggest to the programmer in charge of this state to make sure they reduce the amount of traffic and police on these rural highways.

2. Railyards are a prominent part of most towns.

This is the original transcontinental railroad, and the state would not be the same without it! Most of these towns have trains that go right next to the downtown area.

And in Rock Springs: 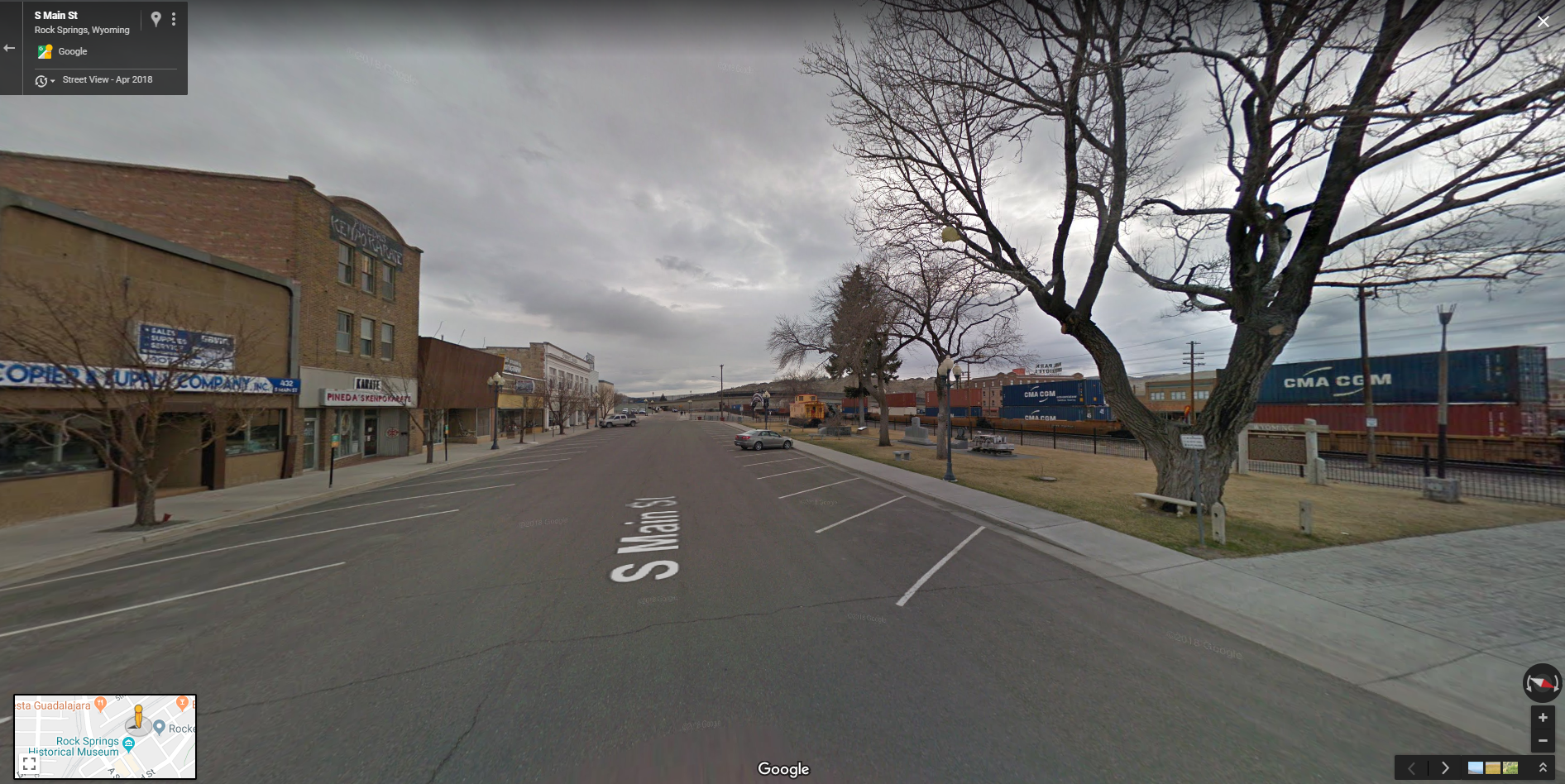 Another thing to keep in mind with Wyoming railroads: there are never any at-grade crossings except on gravel roads. If we need roads to cross tracks, we build a bridge!

3. Mountains should be everpresent.

Wherever you are in the state, you can almost certainly either see mountains in the horizon, or are actively traversing them. Here's U.S. Route 16 between Buffalo and Cody:

And US 287 / 26 between Yellowstone National Park and Lander (Note trucks ARE allowed on this segment, as it is not in the park): 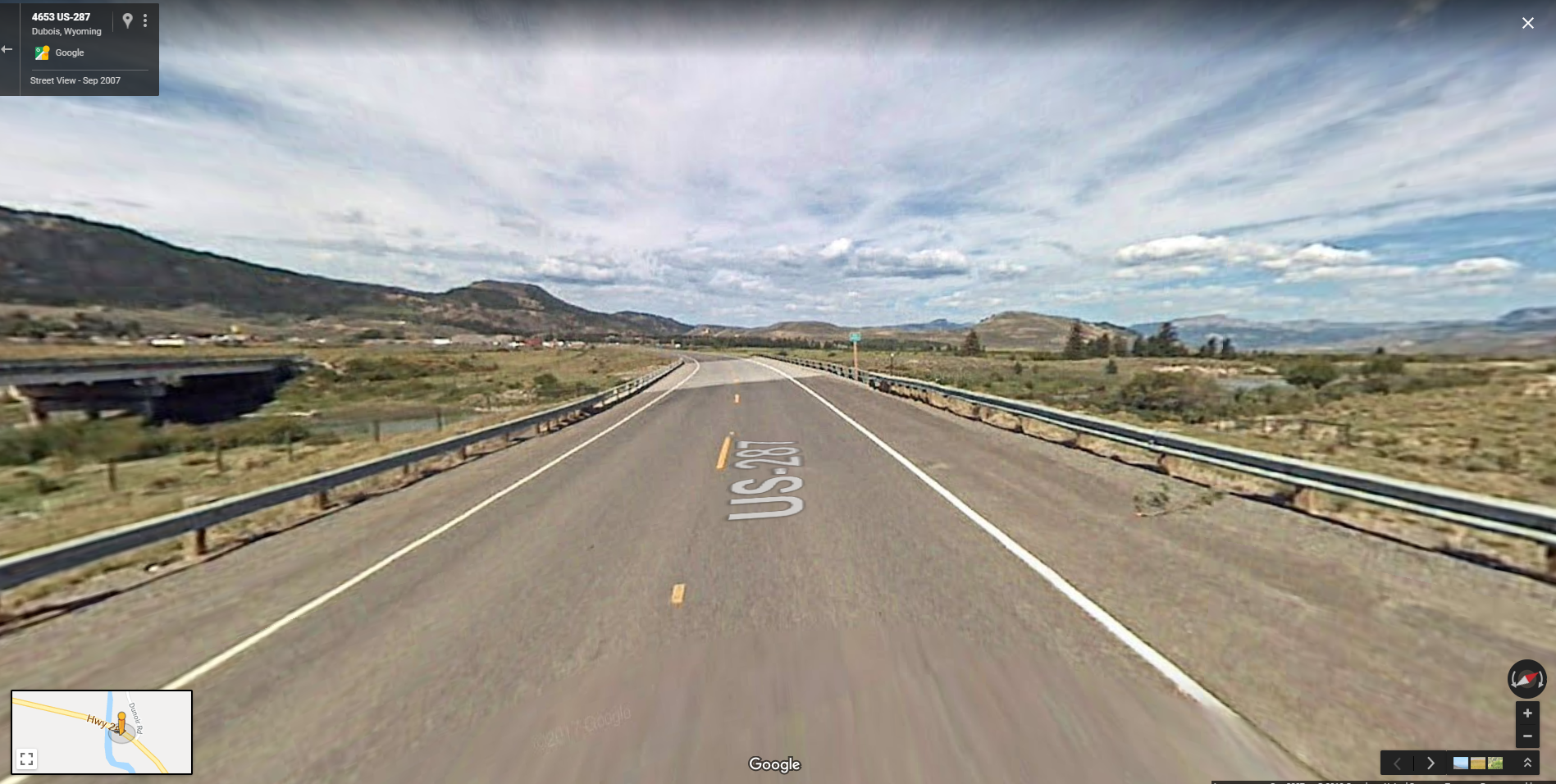 I could not find, so.
The Truck Stop in Little America, Wyoming!

Bug Lyfe wrote: ↑
16 Nov 2018 19:30
95, i believe but i am so rusty, passes through parts of yellowstone. It does not connect to the park roads itself in anyway but its a truck route and goes within the park boundaries for a bit. Very nice drive. It is the west side, it crosses the border in and out from idaho, its a dotted line on one of the maps up there.

rbsanford wrote: ↑
17 Nov 2018 01:10
I think you're referring to US 20 from Idaho Falls to West Yellowstone, then the 191 from there north to Bozeman. I can attest to the beauty of that stretch of the 191 along the Gallatin River, and West Yellowstone would make a nice marked town even if roads in the park aren't included. It would be a kind of Grand Canyon Village type town, a tourist town that's out of the way and accessible by scenic roads. Those two roads along that route would also be a key connection between the sure to be included cities of Idaho Falls and Bozeman.

Axel Slingerland wrote: ↑
17 Nov 2018 04:36
I also think you're describing US 191 going from West Yellowstone, Montana to Bozeman, Montana. Because there are no roads that cross in and out of the park boundaries in Idaho. And yes, it is an outstanding drive. You should try it on a bicycle. Or any highway in or around Yellowstone, for that matter...

I used to live in Yellowstone and many people think the US highway system is a real mess in the park, with several highways running on the same pavement in places. However, the numbered US highways actually don't run through the park, and park roads are considered to be "unnumbered connectors". But nobody I know has ever looked at it that way. They either end at an entrance, or they go through the park.

For example, the east entrance is considered to be the western terminus US highways 14 and 16 and US 20 is the only one that goes through the park, exiting through the west entrance. US 89, 191 and 287 do the same thing, and US 89 goes out the north entrance, and 191 and 287 come in from the south and go out the west entrances. US 212 goes in the north-east entrance and ends. The road from the north entrance (near Gardiner, Montana) to the north-east entrance (near Cooke City, Montana) is the only road in the park that stays open all year, however, the road from West Yellowstone, Montana (west entrance) to Old Faithful is very popular with snowmobile riders (as well as cross country skiers) in winter.
(Side note: Don't ask me why, but US highways start in the east and south and end in the west and north.)

Allie Knight has a video when she drives on the US 191.
Sadly I can not remember when she did that video.
But sometime after the release of ATS.

In Wyoming, the Lincoln Head Memorial needs to be included on I-80 between Laramie and Cheyenne. It is about 10 miles to SE from Laramie at the height of the summit. There is a truck park rest area as well as public rest area, plaques, scenic overviews, etc. It is right along I-80 and easily viewable from the road and well known throughout the region.
https://www.roadsideamerica.com/story/8450
https://www.google.com/maps/@41.2358829 ... 312!8i6656
https://www.google.com/maps/place/Laram ... 05.5911007


There is a Little America truck stop and resort at I-25 and I-80 intersection in Cheyenne, WY. This one is in addition to the one off I-80 in the east, but also a major regional "landmark" that would also be a great place for in-game stops and deliveries.

angrybirdseller wrote: ↑
15 Nov 2018 19:06
Rough map of Wyoming major roads but Yellowstone looks questionable if any truck can even drive there I may be wrong on it.

Highway 789 between Riverton and Lander is an extremely busy and well-travelled route in the state, and for whatever reason Lander seems to be an important town in the state that I'd love to see in the game. The casino on 789 just south of Riverton is a huge traffic driver and draw, as well as being a large truck-stop and catering to drivers.

Another route into Lander (287 to Rawlins) is a little quieter, but still well travelled as it is a path south without having to go 120 miles east to Casper first. The route south on Wyoming Highway 28 (South Pass highway) is also great, very picturesque, with steep dropoffs winding down into Lander, the open-pit (now flooded) Atlantic City iron mine, going over the Continental Divide, etc. Those two routes allow southern access to either Rock Springs or Rawlins on I-80.
Last edited by Flemming V on 25 Mar 2019 06:08, edited 1 time in total.
Reason: Quote Picture removed. Please don't quote post including pictures.
Top

This is Dwyer Junction:

This junction is where US 26 meets I-25. Going east of the junction will take you to Nebraska, particularly Scottsbluff.

There is also, as you can see in the image, a rest area called, well, the Dwyer Junction Rest Area.
Top

Wyoming22 wrote: ↑
08 Feb 2019 18:16
Another thing to keep in mind with Wyoming railroads: there are never any at-grade crossings except on gravel roads. If we need roads to cross tracks, we build a bridge!

I like this!
I really wish this was a federal law!