Yes my friend, the map now allows IKEA to be placed.
It would be great that SCS Software can put the leading companies gradually, will make a very interesting and realistic industrial park.
That is why I am very much in favor of licensing for companies, as well as being advertising for them, it is also good for the game.

The map but I would have placed these SCS boys to make the skeleton of Diamond-shaped "metropolitan area" highways would make the major companies more realistic and orderly.
Legal licensing companies: Target, Blue origin (space).
It is a tip to Mr. Pavel to license these companies: BLUE ORIGIN, TARGET, because she has a lot of cargo.Blue origin (space), are loads for Florida to Nevada, Utah.
Diamond map:
https://www.google.com.br/maps/dir/Taco ... 0?hl=pt-BR

Another company that would be very good to be licensed in-game is FedEx for deliveries because it is a Global company.
So would also be a great addition to the Euro truck, ATS as well.
Then for other FUTURE games because FEDEX she plays in South America Australia and Japan and several other countries.
Fedex is an American brand that has conquered the world because of the Tom Hanks movie; "The Castaway," people loved that movie and the company's express philosophy, "wherever we have cargo we deliver."

Fedex entered Brazil in the same period of that movie, and started acting only in some capitals, and people were very curious. "But do Americans really have a better service than a Brazilian state-owned company?" Because it has won the public with good services and the state-owned company has dropped the movement, which is explained by the fact that the state-owned company takes 15 days to deliver any goods. , any package, anywhere in the country,
FEDEX "BR" maximum 3 days, Amazonia Brazil 7 days.
Don't ask me post office time from BRAZIL, to amazonia BRAZIL Maybe 30 days.(?)
Top

Well there’s two things I thought of that could/should and might be done. The road connection between Bellingham and the forestry place to the east should be made official. I take this route just teleporting past the barrier as the roads all fully exist otherwise.

The other one is that SR-155 should continue north past Grand Coulee so that that place is not a dead end. I don’t see why it should be. If someone in real wanted to drive from Omak to Grand Coulee I don’t see why they would go down the US-97 to get on the US-2 in Orondo to take that to Coulee City to then take the SR-155 to Grand Coulee. To add to that, SR-17 would be nice. I wouldn’t see myself by choice wanting to go through Wenatchee and Yakima if I were driving from the Tri-Cities (Kennewick) to Grand Coulee
Top

So I posted this in the Washington discussion thread over in General Discussion, but I wanted to put this here as well, just in case this is the more appropriate place for it.

WADOT completely closed the West Seattle Bridge, just to the west of Harbor Island in Seattle, most likely until 2022. They suddenly noticed severe cracking on one of the bridge pillars and closed the bridge to traffic on March 23rd. They also closed the Spokane St bridge that runs underneath to traffic (excluding freight and emergency vehicles) while they work on the larger bridge. While we can't cross the bridge into West Seattle in-game, we do get close enough to the closures that I think SCS might want to include them! I created a quick guide to what is closed and where, as well I'm attaching some information from WADOT for reference.

Here's a patented Bedavd "Quick Map" of what's closed on the in-game counterpart of the bridge: 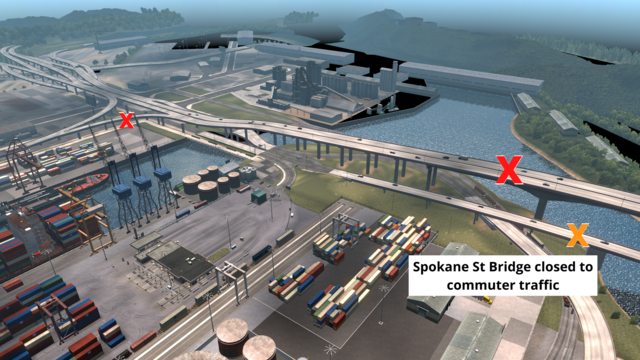 Also might be a good event in a couple years to "help reopen the West Seattle bridge" once it's under construction.
Check out my Michigan research map!

More information: http://www.vaagenbros.com/environment/ The log crane is 128 feet high and carries a large volume of all wood far above the factory height. 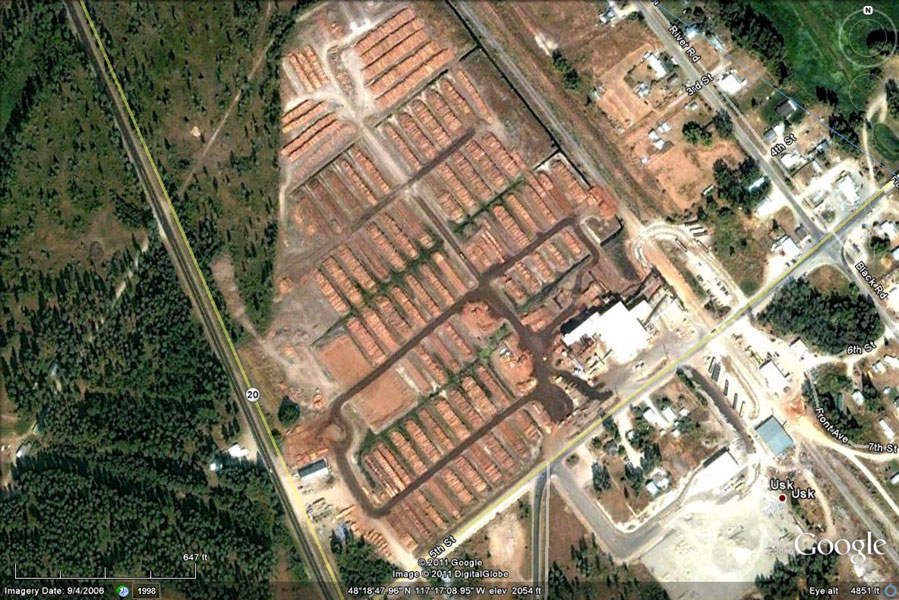