As we're doing some pre-research for ATS, we'd like to know your opinion on some of the things which we shouldn't miss in the game in our future planned DLCs - in this case for the OKLAHOMA state.

For example THIS was a really great job.

General discussion about pre-researches is HERE.

I might not be of much help here, as I don't really know any specifics of Oklahoma; just that it is almost identical to Arkansas in many ways, especially in the eastern parts where it gets up into the forested Ozark Mountains.
One thing I feel I should share here:
This is how their stoplights tend to look:

Honestly, this is how almost every state does them (including Oregon and Washington). It would be quite nice to see these rather than those California-styled poles everywhere.

Let me know when the Arkansas pre-research tips thread starts. I'll be all over that one!

Also, if you need help understanding how those 5-panel lights work, let me know! It seems to confuse a lot of people who may not be used to them.

Are you talking about the doghouse traffic signals? https://www.google.com/search?q=Doghous ... 20&bih=529 I would love to have doghouse signals in ATS!

Yes.
I know it confuses many people from Europe, and I have a feeling that confusion is the only reason we don't have them in the game yet.

This signal give left turning traffic a left arrow in advance to allow them to turn through the intersection just like the ones in ATS. Then, the green arrow will then to a yellow arrow, then the light will turn red. Then the green circle appears on the right half of the signal. This allows traffic going straight ahead to proceed through the intersection, AND it allows left turning traffic to proceed AFTER yielding to oncoming traffic. The only time that there would be a green arrow and a green circle at the same time (see image below) is if both the cross street(s) and oncoming traffic that is turning left, turning right, and going straight ahead has a red light. Doghouse signals are also sometimes used for right turns to indicate when you CAN turn right on red, but you DO NOT have to stop first. This only happens when traffic on the cross street has a green left arrow in both directions.

This sign is also mounted on the traffic signal pole next to the signal. 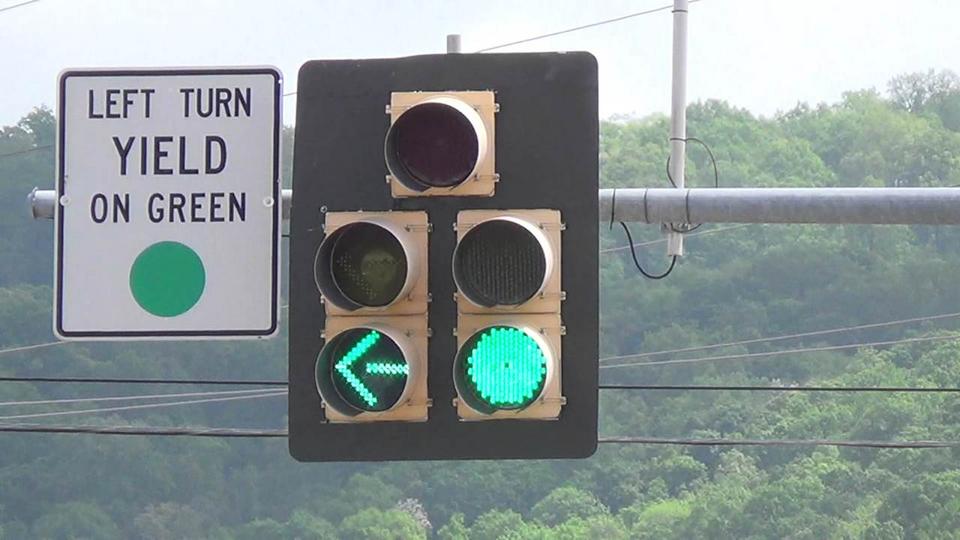 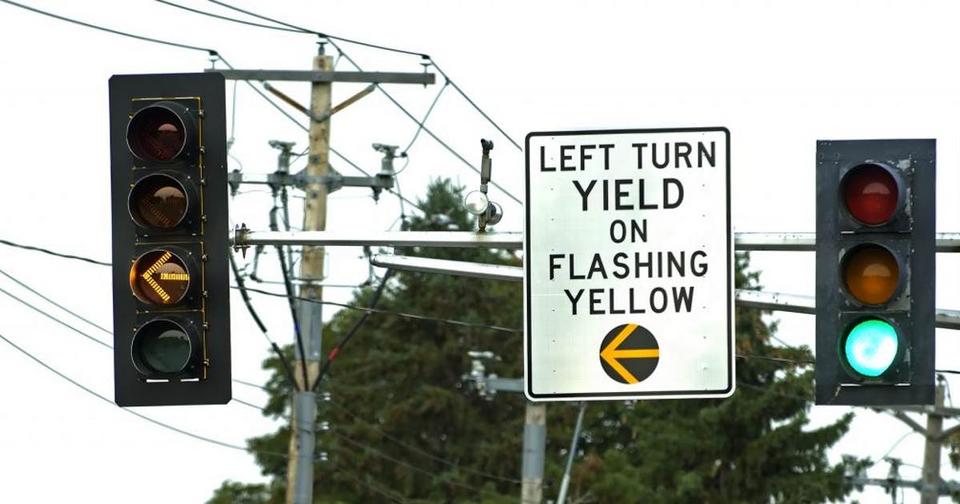 Also, I know that this is in the Oklahoma research section, but these signals are not specific to Oklahoma!! They are used in many states!!

Some junctions also have a cycle where one side gets green lights on all lanes and the left turn lane also gets a green arrow. These kinds of junctions often only have one side going at a time.
Also, many are set up so that all lanes on one side have green light and the left lane has arrow as well, but then the arrow turns yellow, then goes away, leaving the green lights. When this happens, it is the same 3b above for the rest of the cycle. Here are some of Oklahoma's notable bridges:

Here is the Wanette-Byars bridge on Highway 102. It has the longest truss span in the state and is only one lane wide.

The Oklahoma Panhandle is more similar to a semi-desert high plains climate than the rest of Oklahoma, which is temperate. The two most major towns in it are Guymon and Boise City.
In the east, Oklahoma is somewhat mountainous, as it's home to the Ozark and Ouachita mountains, which are around 2,500 feet tall at their highest. Western Oklahoma is home to a lot of fracking operations which could be of use in the game.

The very edge of the Oklahoma Panhandle near the NM border is an area known as Black Mesa, it's home to some small-in-height desert plateau formations.
Go home, America, fifty-five'll do
Top

For anyone that knows what the police cars of Oklahoma City and Tulsa, as well as state patrol, looks like, good luck! I've tried, but it failed miserably.
Top