After Kraake posted various threads for current planned future DLC research tips, I decided to make my own, but for a bit further off DLC I hope to one day see: ARKANSAS. I figured that at worst, this thread won't help SCS (due to lack of planning for this DLC, or maybe it never makes it out for some reason, etc), but at best, it can help their research efforts not only for this particular state, but also for other states (Arkansas is similar in many ways to many other states).

I might as well copy over this list of other states which SCS has made research threads for:

Keep in mind this thread is not part of that list, nor is it part of their official research, just something I wanted to share due to my hopes of seeing this DLC eventually be made.

Arkansas; otherwise known as "The Natural State" is a mostly-rural Southern State, covered largely by mountainous forests and expansive farmland. A significant portion of the state is considered either National Parks, National Forests, or State Parks, which helps the state keep it's name as the Natural State; not covered in urban development. This should allow for quite some scenic routes in the game!
Arkansas can be devided into 5 geagraphical regions:
River Delta/farmland
Ozark Mountains
Arkansas River Valley
Ouachita Mountains
Gulf Coastal Plains 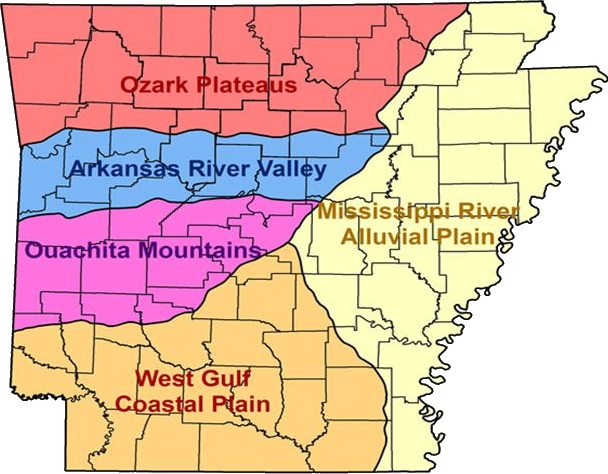 Industries common in the state include forestry, food, and retail.
Grant County (County Seat: Sheridan) is a major hub of lumber transport.
Bentonville is home to Wal-Mart Stores (the larges retail company in the world) and Sam's Club.
Dillard; a large department store chain in the South, was started in Nashville, Arkansas and is currently headquartered in Little Rock.
One of the world's larges meat product company; Tyson, is headquartered in Springdale.
Stuttgart, not only known as the "Duck-Hunting Capital of the World" but also the "Rice Capital of the World" is home to the largest rice producer on the planet; Riceland.
On a "closer to home" note for the truckers here, one of the larger truck transportation companies; J.B. Hunt is based in Lowell, Arkansas.

In terms of trucking, while many roads in the state may officially not allow truck traffic due to National Parks and all, one of the roads most-traveled by trucks in the United States is Interstate 40 between Little Rock and Memphis. This stretch of road has many truck stops.
A recent unfortunate event was when a Loves Truck Stop burned down on Exit 161 of I-40. From what I understand, a rebuild is in progress (I really liked that place, too).

Here is a map I made of some cities and roads that could be included in the DLC:
Arkansas ATS Map
Blue marks: Cities marked on in-game map
Green marks: Smaller towns possibly not marked
Red mark: Capital City; Little Rock

Some of the green towns are not actually on an included road, but those are areas which will likely be large gaps which could easily hold a few new roads and a town.

I will be back with some more information, such as landmarks and scenic areas, as well as possible locations of specific in-game locations and services.
Feel free to share any other information.