Until SCS can rework Nevada and California, at least we do have the Sierra Nevada map mod to get us thru.
My post are only thoughts and ideas. Don't assume it makes ATS.
Poll: Choose Next 2 ATS States
ATS Flatbed
ATS Special Transport
North American Agriculture
Texas Discussion
Top

Only the mountain popping is too noticeable

It doesn't bother me like most though. Only reason the mountain popping happens so much in SN imo is because they jam packed it with lots of windy roads to get elevations in. A trade off for sure. With less roads, we get less cut planes. The more roads and denser the roads, the only way to hide that is with cut planes. For me, it is what it is. I know for the SCS ones, before dx11 really kicked in, the mountains started to fade in slowly vs popping. Now that is more acceptable for sure. But that's SCS vs map mods. There is some things that SCS can do apparently that mods can't. I learned to deal with it though. Then again, I am not one who ever really complained about popping mountains as I always understood the limitations of the game and the draw distance issues. There are things that SCS can control much easier that I complain about vs backgrounds popping.

Considering this is the base build rework thread.........there are mountain in the base game that are in desperate need for replacing post New Mexico. These bother me way more than popping mountains. SCS made a nice break thru in Washington though with baked in mountains. Perhaps the graphics overhaul has a bit more of that in mind for the base map mountains. I am not sure if its the mountain models themselves or if it because base map states use dx9 coding that we have mountain issues. But I do look for certain mountains in the base map to be remade or have better textures. There is a particular one that bugs the heck out of me, the California Hills 2 I believe. From time to time I will get in the editor to tinker around. Its too complicated for me to really try learning it though. But I did make it a point to find out the model name for the mountain that really needs to go the most. It wouldn't hurt to get most all the base map mountain mountains either remodeled or replaced using the new rock formation tool. While ATS is relatively still small in size compared to ETS2, its possible SCS does this anyways. Consider the environment is more diverse in ATS, ETS2 doesn't really suffer from bad rock and mountain formations.

There are also rocks from the base map that technically look okay imo in regards to its form, but there is wayyyyy too much contrast on them. If they can just get re-textured, that will save a ton of time and not have to replace them. It seems that editing the actual model or rebuilding the model keeping the same exact file name is the easiest. That way once loaded back into the game, everything should just get updated and stay in place as long as the footprint is the same size and shape of the original model. If that is the case and its that easy, this is where the community comes into play when we get that graphic update. We will have a big task to help with bugs when open beta for the graphics overhaul kicks in. I am sure the beta testers will have first crack at it but they won't catch everything. I look forward to the graphic overhaul much much more than the sound overhaul. It could be like an entirely new game. But it really depends on what phase 1 of this overhaul entails. Will it be just lighting and skyboxes? I know some prefabs are getting reworked or replaced. But what about terrain models? For me, the landscaping models needs the most graphic updates.
My post are only thoughts and ideas. Don't assume it makes ATS.
Poll: Choose Next 2 ATS States
ATS Flatbed
ATS Special Transport
North American Agriculture
Texas Discussion
Top

Good nigh, as a contribution option for reconstructing the maps, I leave this suggestion of a video in real time of the trip between Bishop and Lake Sabrina, because there is that ("fictional extension route" in mountain) CA-168 . between the city of Fresno and the city of Bishop so it may be useful.
The video shows the real path of part of this unfinished highway CA-168.

Hey guys,
I have been lurking on this forum for over a month. As my first contribution, I would like to present my ideas for a Bay Area Rebuild. Below is what I would do.

Move the whole I-80 Bay bridge slightly northward. Connect I-80 with the US-101, by scrapping current interchange and adding the I-80 and US-101 interchange. Add the Central Fwy segment of US-101. Add the entry ramp from Van Ness Ave and the exit ramp for Mission St. Continue US-101 on Van Ness Ave and Lombard St to the Golden gate bridge. Keep the Embarcadero, which now ends just south of I-80, becoming I-280. Continue I-280, add the US-101 and I-280 interchange. US-101 should be realigned to a more to the east. I 280 will continue and merge with CA-1. I 280 can then split from CA-1 after a short concurrency. The interchange at the split should only provide access to CA-1, and I-280 can be inaccessible after this point. CA-1 can follow a more western route to Santa Cruz. Back over in Oakland, scrap I-580 and replace it with I-880. Provide access to port and industrial areas. Add I-238/I-580( connected to I-880), which will connect the bay area to I-5. Add I-205 and realign I-5 slightly as seen on the map. I-880 can continue to San Jose(which can be added as a newly playable city)and meet with US-101. After the interchange,I-880 becomes CA-17 and connects to CA-1 in Santa Cruz. Santa Cruz should be moved slightly to the SW. In San Jose, CA-130 should be provided an interchange and connected to I-5. A map of the proposed changes is below 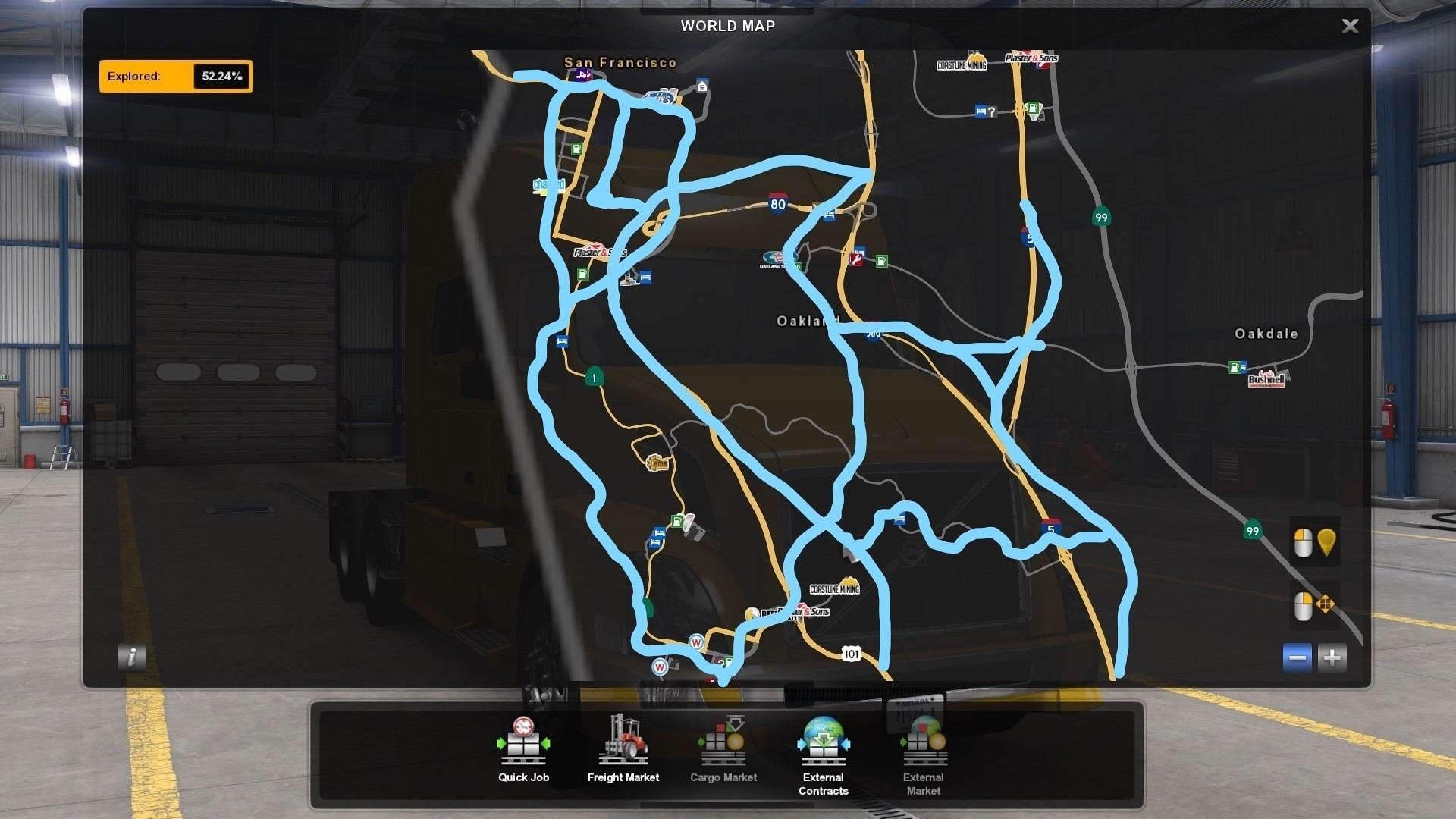 A short record about a region of the United States in California. It may be of interest to SCS Software some places like this in the future...for the reconstruction of California map, It may be interesting to add this site and the delivery of solar panels to this Solar Farm, the information in the video is that the mine is closed maybe in the future it may be open again, at least within the creativity of the game could be something interesting.
1.Desert Center 1:31 US-10
2. Eagle Mountain 5:59 R2
3. Solar farm 9:23 R2
4. Lake Tamarisk 10:46 R2
Top

Does anyone on here live out around El Centro or in the area? I remember, back in the 80s, there was a huge tower on the south side of the city that had a line drawn on it for sea level and written under the line 200 feet Below Sea level.... or something like that. I never thought of getting a picture of it at the time. It would be a great visual landmark for ATS. First time I saw it I almost crapped my pants. I couldn't believe that area was below sea level... as the Salton Sea is too.
Gary - CB code name: CW
Formerly from Northern NY on the Ontario/Quebec borders.
I've hauled ass down the road to deliver new cars and trucks, fuel, freight, and produce. Now I'm ATS addicted to doing the same thing in a simulation.

Good morning, my research tip is about this very beautiful point full of history and tradition of an American Indian people. It is inside an indigenous reserve. Perhaps to make the licensing a little complicated because the tourist access to this place is restricted but every way is the record here of its occurrence and location. But this Monument would be very interesting
Top

I'll just say that California doesn't look like California AT ALL.
Top

Well California kinda has to be given the most leeway of all states. Pretty much anything before New Mexico has the most inaccuracies. Now with the current mapping skills and detailing, California and Nevada will always look behind. The roads and other assets hopefully get redone in the areas that are critical. Southern California should be the first area to get revamped, then the Bay area. Then here and there some updating will fix her up nicely for the time being. If Southern California could get rebuild by a small team of like 2-3 in like a year, that is progress. We are getting Vegas soon so that started things off. Baby steps though.
My post are only thoughts and ideas. Don't assume it makes ATS.
Poll: Choose Next 2 ATS States
ATS Flatbed
ATS Special Transport
North American Agriculture
Texas Discussion
Top
Post Reply
218 posts