[TRAFFIC SIGNAGE] State route shields in the US

When there are two routes of the same designation but are not connected, it is called a "gap". They are the same route, but is simply not finished yet. This occurs quite often.

I would be very impressed if they "finished" a highway between Idaho and New York that would, aside from what little currently exists and Yellowstone, be either redundant with or coterminous with I-90 for 8 states. Unless plowing through Yellowstone to create a route from Pocatello to Casper -- a route which would be almost pointless outside of, like, Milwaukee to Portland specifically -- is in the plans, it ain't any more of a "primary interstate" than Kansas's I-135. At least most other relatively short Interstates have obvious

The United States has been on a trend of going against the standards. Way too many Interstates are still being built in the wrong locations.
I think the most major culprit is Interstate 3 in Georgia and Tennessee.
Not only is it a VERY SHORT "Interstate" highway to be numbered with a single/double digit, but it is also WAY east of Interstate 5 (which is in California, Oregon, and Washington).

The designation comes from the fact that it is a memorial highway for the 3rd Infantry Division. That said, the Federal government should NOT approve the designation, but rather declare it a STATE highway (not Interstate highway).

I wouldn't mind one day, eventually, seeing an initiative to redesignate ALL Interstate Highways to bring the entire system back to legal standards (as well as maybe even removing Interstate designation from all toll roads).

Down here we've got a pointless I-14 that's technically in the right place, but only like 25 miles long. Allegedly it's supposed to eventually connect Georgia to somewhere in west Texas like Odessa or Sonora, but I'll believe it when I see it. For the time being it's blatantly just a small spur of I-35.

Even if Texas suddenly gets on a "we want to build highways" rush, it seems more logical to either do our part of I-69, continue I-2 to Laredo, or connect I-27 to Midland/Odessa. My dream is a non-horrible road between Austin and Houston, but I don't see myself getting that lucky in my lifetime, so I'll settle for SH 71. Or sometimes if I'm feeling ballsy I'll take US 290 partway and diverge onto SH 21 or 237.
Top

We've got something similar here in Virginia too. Ever heard of I-66? Chances are, you haven't because it is only 75 miles long. It is still technically an Interstate though because although 99.9% of it is in Virginia, 0.1% of it is in Washington, DC. Originally, it was planned to be a new version of the famous US-66 highway that goes from Chicago to Los Angles. I-66 was planned to go from Washington, DC to Los Angels. As the planned the route, the realized that it would be redundant in many locations as it would run parallel to many of the already existing Interstates. Funding was cut almost in half, and the plans shifted to a new Interstate 66 that would go from Washington, DC to Wichita, Kansas. Construction began in Virginia and Kentucky. The 75 mile stretch of I-66 in Virginia was built in many small stages between the 1960s and 1980s. In Kentucky, only a few short miles of road were constructed along with a few interchanges. Funding was cut short again, and there was no way they could cut through the mountains with their new budget, so the new terminus of I-66 was I-81 near Front Royal, Virginia. The sections that were built in Kentucky were repurposed into Kentucky state highways. To this day, this once transcontinental Interstate that was intended to be the new "main street of America" is still just a measly 75 miles long where Virginian commuters who live in the depths of suburbia sit in traffic every morning on the way to their 9 to 5 job in Washington, DC and where truck drivers trying to get out of the Eastern Corridor of I-95 cut across from the Capital Beltway to one of the busiest truck arteries in the country, I-81.

@Supersobes that is what is going on with I-73. Only NC completed their section. It is/was suppose to run from Myrtle Beach, SC to Sault Ste Marie, MI. MI and OH refuse to build it because they say there is already highways that 73 wouldn't be needed.
Top

Yeah, I-75 runs from Sault Ste. Marie to the SE corner of the state, there’s no need for a second N/S Interstate on the east side. Michigan also has I-69, which is supposed to run from Port Huron to Brownsville TX for cargo moving between Canada and Mexico, but only Michigan, Indiana, and Kentucky have completed their portions.
Check out my Michigan research map!

similar to Arizona, route 66 in Oklahoma from El Reno to US60 is a state highway shield below 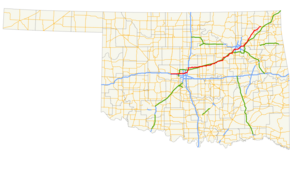