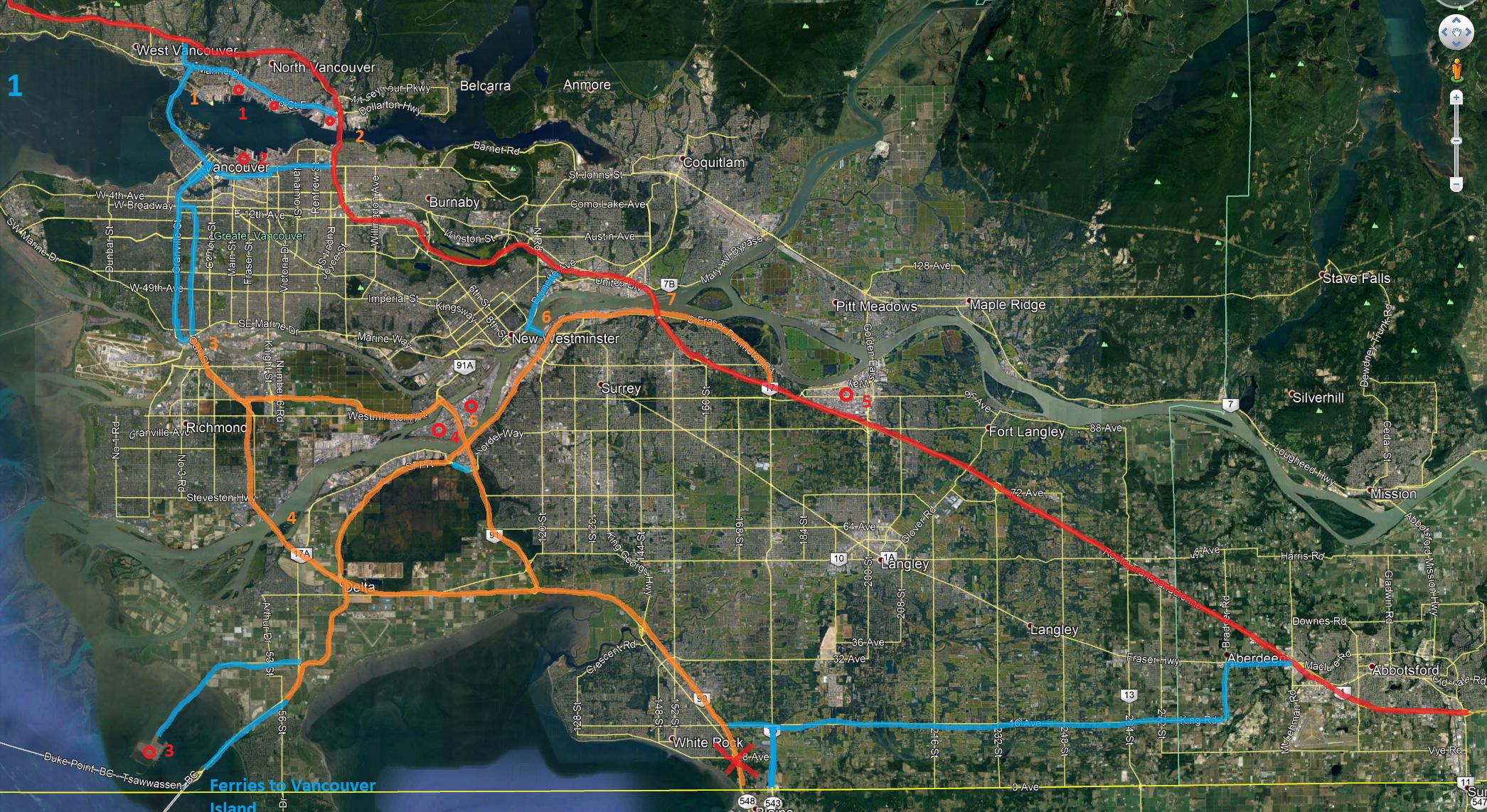 
So with the possible addition of Canada some time in the near future I thought it would possibly be a good idea to get a head start, I will fill this slowly but I think it's most important to start with Vancouver because it's British Columbia's and Western Canada's economically most important city, it needs to be done justice.

As a person born in Vancouver I want it to be done right and I think this is how to do it.

Highlighted roads that I think should be in the map
Red= Transcanada Highway
Orange= Interstate level highways
Blue= Roads and Streets that are key arteries.

Red numbers are key industrial areas and the red circles marking them.

The blue number one in the upper left corner refers to there being another ferry terminal to Vancouver Island, I happened to cut it off the map and didn't want to start over again, these ferries go to Nanaimo.
The ferries in the South go to both Nanaimo and Victoria

The big red X at the border to Washington State is interesting, Trucks aren't allowed on the Highway 99/Interstate 5 crossing they have to exit and go to the truck crossing a few kilometers east of the red X.
Last edited by canuckster on 02 Apr 2019 16:42, edited 9 times in total.
A Lannister always pays his debts.
Pining to drive the Trans-Canada Highway... some eventual beautiful day.
Top

Probably the most iconic bridge in Vancouver, our Golden Gate bridge so to speak. It connects the down town core to the North Shore and West Vancouver, the south side of the bridge begins in Stanley Park, another Vancouver icon, the road curls through it's forest and driving through the bridge suddenly appears almost out of nowhere and all of a sudden you're hundreds of feet above the water.

The bridge on the North connects with Marine drive leading into the North Shore, this includes the many industrial terminals along the shoreline stretching all the way to bridge number 2 on the list, the Iron Workers Memorial Bridge.

The Ironworkers Memorial Bridge, also known as the Second Narrows bridge, connects the North Shore with the City of Burnaby and Hastings Neighbourhood of East Vancouver, this is also part of the TransCanada Highway

Interesting note, there was an older bridge in the early 20th century that combined both a small road and an earlier version of the train bridge beside it.

Nothing flashy, a simple bridge that connects the southern communities with down town Vancouver. Anyone coming from the US going into Vancouver is more than likely travelling over this bridge.
https://en.wikipedia.org/wiki/Oak_Street_Bridge
https://www.google.com/maps/place/Vanco ... 23.1207375
https://www.google.com/search?q=oak+str ... 0&bih=1297


More to come
Last edited by canuckster on 01 Apr 2019 18:22, edited 3 times in total.
A Lannister always pays his debts.
Pining to drive the Trans-Canada Highway... some eventual beautiful day.
Top

Nice ideas, but I know from experience that this will never fit.
-
Top

Oh believe me, watch when my post about how big Vancouver is in distance... if they can do Portland the way they did, they can do Vancouver.

There's literally nothing north of Vancouver either so there's plenty of space to stretch it into without encroaching on anything else vital.
Last edited by canuckster on 01 Apr 2019 18:14, edited 1 time in total.
A Lannister always pays his debts.
Pining to drive the Trans-Canada Highway... some eventual beautiful day.
Top

Yes, they have to do a "Portland" on Vancouver BC.

Alternative start route: 1. Note, the areas below are not on this. But those are good delivery places.
Vancouver Harbour area has a lot of possible deliver spots.
And Fraser River area, there's even more.
George Massey Tunnel No dangerous goods and height limit of 4.15 m.
Pattullo Bridge.

Lol @ your map completely bypassing Surrey. As someone who lives there... good choice! Absolutely nothing of value here for ATS or otherwise. I wanna move.
Top

Mel McConaghy wrote about his experiences trucking in BC. But all of it was more North. I think the industries and the scenery that would make the province better represented are perhaps less present in the very south, although one needs to have some SellGoods & Wallberts, etc.

''umad'' wrote: ↑
02 Apr 2019 01:55
Lol @ your map completely bypassing Surrey. As someone who lives there... good choice! Absolutely nothing of value here for ATS or otherwise. I wanna move.

Born in Surrey, raised in Surrey and North Delta, I agree, I would never willingly step foot in either place again.
A Lannister always pays his debts.
Pining to drive the Trans-Canada Highway... some eventual beautiful day.
Top
Post Reply
16 posts