The standard used in roughly half the United States ( Not California )

California was the state that was first created in American Truck Simulator and ATS has been around since 2016 and probably way before it was released. The age of the state shows in its city design, road networks, vegetation and detail similarilly to elder countries in ETS. At one point it might be a decision for SCS to re-create California to modern day quality similar to how they did with Germany, and when that happens I really hope this thread is thought of.

One thing that European Truck Simulator nails perfectly in newer DLCs is the attention to road markings, where for each individual country there is a different type of road lines just like real life. Even though I am aware not everything is decimal to decimal perfect, viewing them from the cockpit it still looks identical to real life. ( Atleast I can say so for how SCS created the markings for my native country Norway ) I have yet to see this for ATS where every state seems to use the same standardized scheme. I don't think SCS has recognized the fact that each state in the U.S has their own local adaption of the FHWA protocols when it comes to road lines. ( !I do appreciate botts' dotts were added in the last DLCs but Oregon and Washington are not the only states that use them!" Of course, the standards are not differing to the extent to that of its European counterparts, but the differences are still very noticeable and one of the states where it is most noticeable is the state of California. The United States has 2 variants of the road marking widths. The current one used ingame for all the states doesn't resemble any real life profile, the widths of the markings are inaccurate as well as the lenghts and gaps both horizontally and vertically on the road template.

I believe that one of the most important things in a simulator is accuracy. When attention of accuracy to signage, buildings, vegetation, traffic, etc is well thought of, I don't see why road lines shouldn't aswell. There's nothing that you watch in ATS/ETS more than the road ahead of you. To me it's been bothering me for the past couple of years after i started noticing it and I do want to make sure SCS is aware of this before they at a later point realize it and decide to re-do everything again similarily to how they did the signs.


Those are standards I gathered when I did research for my older project Project West and also while I was working for ProMods gathering research for the ATS pack. I spent several hours gathering this information and did it out from measurements in pictures and through Google Earth measurement tools. This is the realistic profile for California:
CALIFORNIA

Because of the SCS lane width of 4m, which is 1m wider than real life in most areas I believe the 150mm width should be utilized to make the scale seem more accurate. ( The info I have on single thick lines might be inaccurate, I have not done enough research on this to confirm that they are 200/250mm thick or should be 300mm/350mm thick. I do believe freeway exit broken lines use 300 )

Because of node stretching, I believe adapting the European standard of3m x 9m is reasonable, as it can be compared to 4m x 10m easily. 3m x 9m is also the standard that the rest of the United States uses ( Identically to many European countries ). Ingame right now every state uses a 4m x 8m variant I believe, which is highly incorrect.
( Take some of the info in this pic with a grain of salt ) 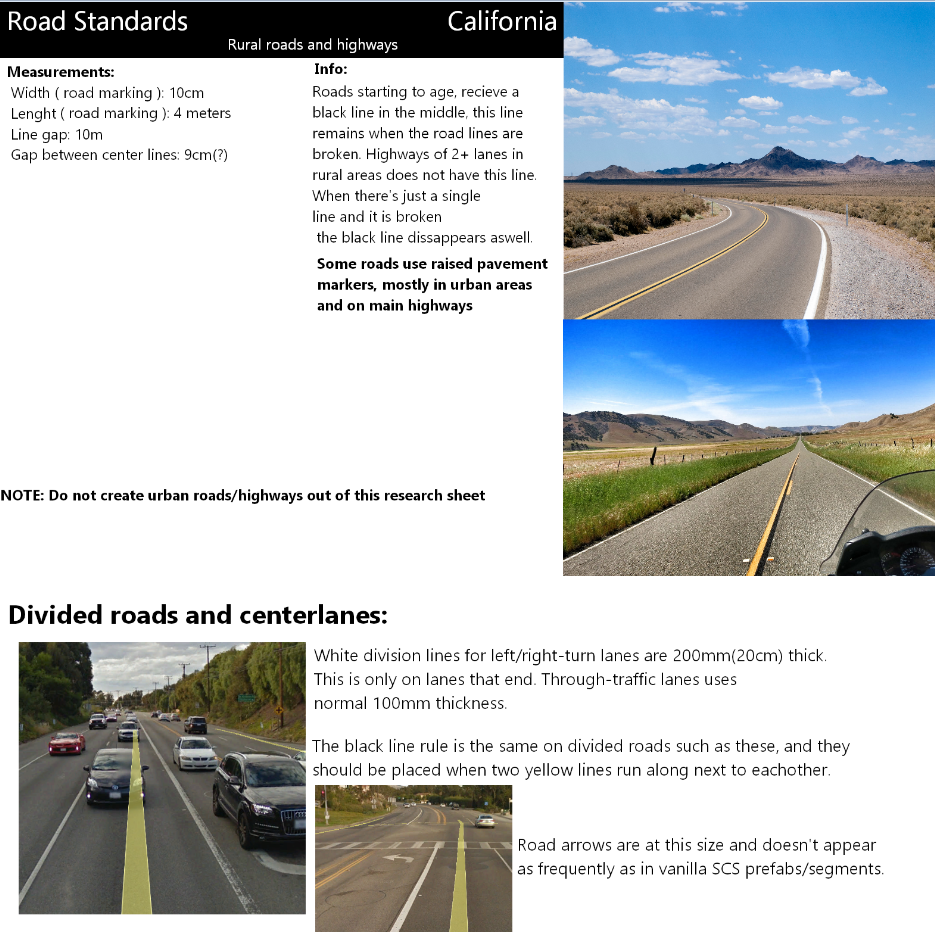 Road reflectors
It also bothers me that there are rarely used road reflectors on the roads. SCS did add this for ATS but the distancing between them is weird and they are not attached to any road templates. Road reflectors are frequent on every urban expressway in California and roughly 50% of other roads.


The rules for multi-lane expressways are different from rural roads but I might continue on this topic if its any interest. I also gathered info for every western state when it comes to road markings so I might make seperate threads.

When it comes to road marking coloring it does make a difference irl on the material used for the road paint, in thermoplastic lines the code for yellow on road markings in the U.S is Federal Color No. 13538. https://encycolorpedia.com/f9b000 however California seems to have variants of this.

Album of real-life California road markings so you can see for yourself.
https://imgur.com/a/kxU7BUz
Creator of Project West, Authentic Roads and Project Japan
Top
Post Reply
1 post • Page 1 of 1