All the time I am at this point with a AI car/truck at my side, they hit me. 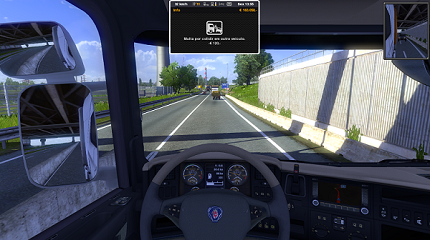 Then I would say you have a couple of options to choose from.

1. Live with it because that's the way it is.
2. Plan a different route.
3. Hit them before they hit you.
You can call me Ax

I love your solutions Axel!!!

What can I say? I just love runnin' over AI!

Ok, shouldn't this be there fine for crosing the line and hitting you instead of your fine? I mean if you re end someone it is your fault, cross the line and hit them it is your fault. Why can't the AI be fined for the same? It's like oversized loads instead of waiting to pass you on a 3 lane they try to pass on the 2 lane and hit you and damage your cargo. I end of fined and losing because there is damage to the cargo. I think the beacon and AI need to be implemented and tweaked. So if this happens it is not your fault do to poor AI decision.
Top

So now the AI makes decisions and should be fined for having poor driving skills?

The other day I was driving on a 3 lane highway in Germany, my truck was in the middle lane doing around 90Kph.
Then a car roared past going at some incredible rate in the right lane, then a car doing the same speed passed in the left lane and moved into my lane up ahead. Meanwhile the car in the right lane pulled in front of the other and they collided, they both flipped, rolled and spun out of control blocking the left and middle lanes. I couldn't move to the right lane as another truck was in the way, I thought I would hit (and get fined) when another car went flying past in the left lane hitting the car in front, sending it flying into the middle lane while he stopped in the left lane. This created a small gap. Swerving, I was able to roar between the gap missing all of them!!!
That was quite exciting, I smiled with contentment!!!

Geez Reece, your lucky to be alive

. I hope everyone was alright

The other day, came upon a multi-vehicle pile up on the high way, cars pointing in all directions.
Another expansion to ETS: become personal injuries lawyer firm...
Top
Post Reply
10 posts • Page 1 of 1