I have yet to reproduce any of these AI bugs except one where the AI got stuck bumping another and the tractor unit turned on every bump.
No exploding trucks/cars, no AI going off road or stuck on guard rails. Nothing.

However, i suspect it's down to the AI spawning in that particular configuration that causes these things to happen.
Still boggles my mind how i haven't seen anything funny going on myself. Not that i get much time behind the wheel in game anyways, just for bug/help reasons.
On extended hiatus.
Top

Never seen any issues like this either and I'm on 1.12. Only time the AI ever crash into me is when I do something patently stupid like not checking traffic before pulling out into an intersection or when I change lanes like I was plaing GTA.
Top

Worst I have seen is when a three lane motorway merges into two lane, sometimes I would find an AI car upside down (must've got hit hard).

And most recent occasion was when I was in maybe Berlin? It looked like a truck jackknifed. Blocking both lanes of traffic, but I was able to squeeze my way around traffic and choose an alternate route through the city.

Hmmm... perhaps this is the random accidents feature some people have suggested before.

About jackknifing: it seems SCS has made it so the trucks do get pushed by the trailer into a drift under braking, almost giving the feeling that you are going to jackknife, but it does not completely turn your truck around, only enough to maintain an obtuse angle rather than the usual acute angle that happens after a jackknife.
Top

Here's another accident at same type of prefab as the ones I posted earlier. As with the others I just found the AI's like this without seeing the accident itself. Note the combo upside down at the railway tracks 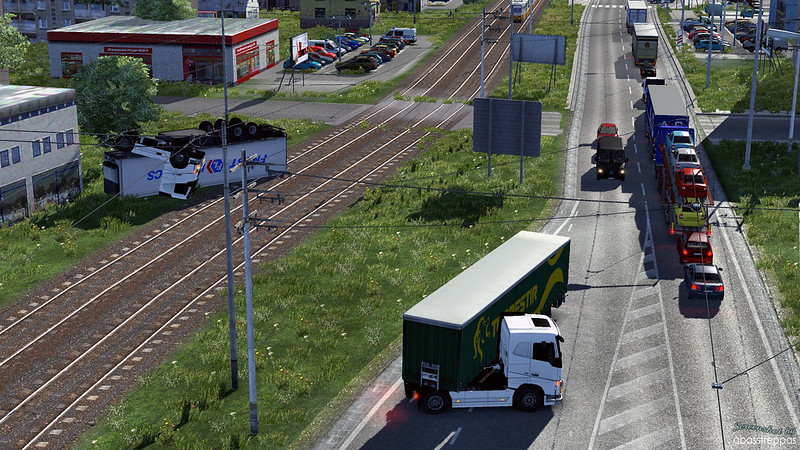 But that's a mod map, isn't it?
Still most likely the same bug.
On extended hiatus.
Top

Yes it's Hungary Map, but it occurres in all maps on that prefab

cheers,
Dorin
Sent from my Mercedes or Peterbilt as seen here and it remains to be seen here
Top

Thanks Dorin, i can confirm that this happens everywhere and quite frequently in the current beta patch.

On a side note, since 1.14 this thread is no longer valid for AI reports as they have reworked the AI a lot in 1.14.
Please post your 1.14+ AI bugs in the correct subforum. Of course making sure that it hasn't already been posted. So check and make sure and use an existing thread if it exists.
If the thread is locked that means it's in the internal bug tracker or SCS are already aware and working on it. That is, DO NOT make duplicate reports.