I get an error message while playing the latest update to ETS2 Public Beta 1.36 for Mac OS X which I downloaded on Steam about 45 minutes ago.

The game loaded without any problems and I was delivering a Cargo Market job using my own Steel Deck Flatbed trailer. Whilst driving along the highway, the Game suddenly froze and displayed this error message: 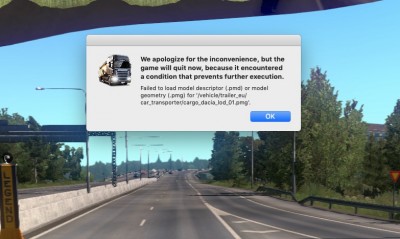 I clicked blue OK button, quit my Steam Client, restarted my iMac, Steam Client, and loaded ETS2 Public Beta 1.36 for Mac OS X. A message (which I don't recall having seen before) appeared advising that the game was being down graded to an earlier version: Game version 1.36.0.53s
Top
Post Reply
1 post • Page 1 of 1