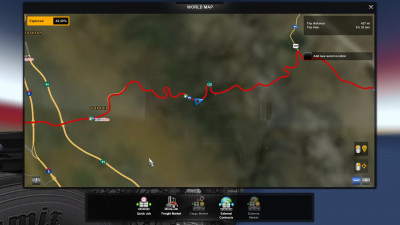 Who thought it would be a good idea to add a road where commercial trucks aren't allowed into a truck simulator? And why doesn't the route advisor know that i'm not allowed to drive there.

The message that i got there was "Commercial Trucks aren't allowed in this area. You have to turn around". This message is especially funny if turning around isn't even an option because of the narrow road. Does it have consequences if you ignore that message (i have to ask that because the police is always turned off in my game or else i would go broke in no time because of the stupid AI that forces me into accidents xD)?
Top

The game does fine you for taking that road with a trailer attached. I'm not opposed to having these routes in the game, but I do wish the route advisor would avoid them by default.
Top

Yes, the problem seems to be the Route Advisor not knowing about such restrictions.

But Lynodie's point is a good one I think: Turning around should be an option at the time you get that message, otherwise the message is pretty useless.

IIRC the history behind this particular road is that when SCS built it, they didn't know trucks aren't normally allowed to go through U.S. National Parks. Rather than removing the road altogether, they added a small fine if you use it with a trailer. IMHO a good solution.
To drive in ATS without navigation, it's helpful to use a physical map (for highways) and driving directions (for inside cities).
Top

If the game would remember roads that you want to avoid then this wouldn't be a "problem" (then you would be able to mark this road and the advisor would then ignore it), but sadly the game doesn't add this information to a savegame.
Top

Hmm. I've never seen such a feature in an IRL GPS, so I'm not sure this game should offer it.

However, the game's "Best" navigation mode clearly isn't working as one would expect. Exhibit A for me is the I-5/I-10 freeway interchange in L.A., which "Best" tends to avoid. It routes you over surface streets instead, past the construction site and the motel. An IRL GPS would usually have an additional penalty for such surface streets to avoid through traffic from being routed over them. In the ATS Route Advisor, the Yosemite road should have such a penalty as well.
To drive in ATS without navigation, it's helpful to use a physical map (for highways) and driving directions (for inside cities).
Top

If you have fines disabled it's a nice route. Yellowstone in Wyoming would be a very nice route as well.

Sometimes you only want to drive with a good landscape (like tourism). So I wish SCS continues adding these routes. Or it could happen something like ... No Yellowstone = Not buying Wyoming DLC

nautofon wrote: ↑
16 Jun 2021 10:52
IIRC the history behind this particular road is that when SCS built it, they didn't know trucks aren't normally allowed to go through U.S. National Parks. Rather than removing the road altogether, they added a small fine if you use it with a trailer. IMHO a good solution.

Actually this is incorrect. CA-120 (aka Tioga Pass) was added well after the base map. To be exact, 2018. The Tioga Pass Blog will explain everything and why its there. SCS knew 100% this road was not truck accessible but they wanted to showcase how beautiful the road is on top of training for a new mapper. I am 100% glad they have chosen to do so. They did the same with US-34 in Colorado thru Rocky Mountain National Park. Hopefully they do the same with Yellowstone in Wyoming.

The game might have the title of Truck Simulator in it, but at the end of the day, its still a game. People don't buy this game to be a professional trucker. There must be some fictional moments to the game to keep people engaged. ATS has a portion of tourism in it for those that love it. Its one of those no harm no foul deals. If you don't want to take the road, don't take it. The game only has 2 roads currently and its easy to avoid them both if you plan ahead.........just like a real trucker.
Last edited by flight50 on 17 Jun 2021 02:37, edited 1 time in total.
My post are only thoughts and ideas. Don't assume it makes ATS.
Poll: Choose Next 2 ATS States
ATS Flatbed
ATS Special Transport
North American Agriculture
Texas Discussion
Top

But … Crater Lake also has a fine if you go with a trailer, doesn't it? Okay okay, OR-62 is not a through road in ATS, so I suppose it doesn't count here.

To drive in ATS without navigation, it's helpful to use a physical map (for highways) and driving directions (for inside cities).
Top

I think these sections of road is a perfect place to deliver equipment to. We have them already in the game where you deliver to a road work site.. Why not use them in those sections then it would at least give you a trip there once in a while.
Top
Post Reply
19 posts