The other miss on a digital sign board is the one at the scale that says the speed limit on the scales is 5 MPH....the game won' let you weigh unless you are going 3 MPH or less....either the sign should be updated or the game parameter should be updated

Dunno, from Seattle to Roswell was kind of a nice and relaxing tour, or eg Helsinki to Osnabrück via Sct Petersburg was equally nice were as the Million Dollar Hwy or I70 can be a bit stressful with a large articuclated trailer

That is true. I refuse to stop at any of the weigh stations in ATS out of protest of how unrealistically short SCS makes the ramps. There's not enough distance to slow from 60 MPH to 10 MPH because the ramps are less than half the length they are in real-life.

I feel as if the majority of weigh stations in the US you dont have to stop and release your brakes. According to SCS it is the opposite. Most weigh stations IRL you cruise across the scale at like 3 mph. I'm not sure if SCS is worried you wont be able to "activate" the weigh station when moving but it is easy to activate at 3 mph in game. That is definitely one of my pet peeves that I thought they would fix in Colorado but apparently not as they put signs at every one to fully stop.
What good is a world without good detail?
Check out my screenshots
Top

I haven't come across a scale in the game where I needed to come to a complete stop; all of them seem to work rolling across at 3 MPH....the point of my post was the sign info should match the actual scale speed of 3 MPH and not be posted as 5 MPH as they don't work at that speed.

EDIT: here is a correct one in Utah 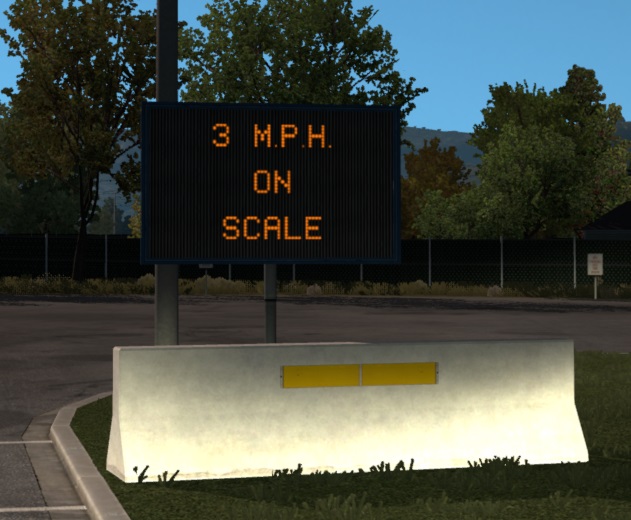 Funny you say that but I do it for a different reason. Weigh stations and scales are useless right now. Until we can slide tandem more realistically, to matter, I don't bother stopping anymore unless I need to discover the road going thru them. I think Multi drop could be a factor into proper weigh scales. Based on what Robinicus just said, I had no idea rolling stops worked. I am so gonna try that. Thanks for that info.

But on the topic you guys speak of, weigh stations and rest stops in general have unrealistic exit speed for sure. Trucks need time to gain speed and this ridiculously low speed..........I ignore them. With millions of $$$ in the bank, it doesn't matter. The goal should always be to get up to highway speed as quickly as possible. I ignore the speed limit and take the fine. SCS should completely remove the speed limits on the accelerating lanes leaving weigh stations and rest stops.
My post are only thoughts and ideas. Don't assume it makes ATS.
Poll: Choose Next 2 ATS States
ATS Flatbed
ATS Special Transport
North American Agriculture
Texas Discussion
Top

@flight50 Fortunately, SCS has fixed the ramp speed limits in the newer map DLC. They no longer put actual legal speed limits, but rather they put the advisory ramp speeds like there is in real-life. You can't get fined for going over an advisory speed. My issue with the weigh station ramps isn't getting fined for being over the speed limit though. I actually play with fines turned off. For me, it breaks the immersion when you have to come into the scale at such a fast speed and basically slam the brakes just be able to be at 3 MPH or less by the time you get to the trigger. Most weigh stations in real-life have a ramp that is somewhere between 1/2 a mile a 1 mile long with an advisory speed of 40 MPH. This would allow enough space for drivers to slow down to the scale speed without having to abruptly slam the brakes. In ATS however, you only have about 500 feet or less to get from 55+ MPH to 15 or 10 MPH in order to be at the correct speed to realistically creep onto the scale at 3 MPH. For it to be realistic, you would need at least 2,000 feet of stopping distance, about 1/2 a mile. Yes, it's perfectly possible for a loaded truck to stop in 300 feet, but that would basically be slamming the brakes, which should be unnecessary for most cases unless there is an emergency in front of the truck that the driver could not predict. It's not realistic for a routine stop like at a weigh station which should have ample warning and space to slow down. In many cases, stopping in 300 feet or less from highway speed would require the activation of ABS to be able to pull that off.