We pretty much knew it was CO-14 or US-34. No way both fits. I thought CO-14 had the better shot but when we saw the one blog post about at I-25 @ US-34 (the Loveland overpass), then that US-34 became more of a reality. US-34 has a huge trucking void on it according to Rand McNally so I was surprised we got it instead. At least Estes Park should make the game now.

I agree on US-160 as I too thought that would be in. I can't exactly say I'm disappointed though. More like, I was really hoping. It can still come though but with US-350 in place, its not that bad for day one. I think US-160 to US-385 still has a shot with Texas, Oklahoma or Kansas (in that order).
My post are only thoughts and ideas. Don't assume it makes ATS.
Poll: Choose Next 2 ATS States
ATS Flatbed
ATS Special Transport
North American Agriculture
Texas Discussion
Top

ALT2870 wrote: ↑
21 Oct 2020 03:32
Both Berthoud and Rabbit Ears Passes is just pure pleasure to look at. They are so many tiny details that they hit out of the park. Also a huge thank you for not giving it the US550 treatment and combining the two.

That's kind of a weird statement. Why the heck would they even do that? That they would do that in the case of US-40 too was completely out of question
from the beginning. There is no point in saying (huge!) thank you for that lol. The distance between Coal Bank and Red Mountain passes is just about 25 miles
(a real flyspeck at ingame scale) so it makes sense to combine these two in this case (i know you see that differently, that is to be respected). Berthoud Pass
and Rabbit Ears Pass, on the other hand, is 90 miles apart. Not comparable at all. To combine these two would be totally idiotic, nobody would ever come up with such an absurd idea.
Top

Colorado looks great as a result.

And I'm seeing wildfire warnings in many parts of Colorado on Google Maps.

I’m so excited about US 34 through Rocky Mountain National Park, thought they’d exclude it because it’s truck restricted.

That is a gorgeous drive, hope they do their magic,
Top

Towards the end of the video theres a giveaway of the wide GPS map, looks like Denver is only accessable from I-70 and we can’t drive through downtown, was hoping for a little of Colfax St interchanging with I-25, but probably impossible due to scale.

But despite that mild disappointment, Colorado looks fantastic.
Top

Denver is wayyyy to large to drive thru downtown. I'd say a good rule of thumb is Boise sized cities and smaller, we will be able to drive thru. No large city in the game allows us to drive thru it and I don't think that will change. Boise may have given most fault hopes but Boise is a very small city compared to the top 30 cities. Most downtown centers have majority of the trucking done outside the city. There are times when you will see them but in ATS, there's no space to do large cities and allow us downtown access. To even continue getting cities like Denver, SLC, Seattle and Portland, we'll have to admire them in passing on the Interstates, not surface roads. Me personally I'd rather have the devs knock the skyline out the part and not be able to access it vs only have a few iconic buildings with a few surface streets to be able to drive on.
My post are only thoughts and ideas. Don't assume it makes ATS.
Poll: Choose Next 2 ATS States
ATS Flatbed
ATS Special Transport
North American Agriculture
Texas Discussion
Top

I agree that driving by more impressive cities is preferable to driving through less impressive cities. The closer we get, the more time they have to spend on small detail, which could take away from the size of the city or the rest of the map. The major cities are one of the reasons why I slightly prefer ATS to ETS2. San Francisco, Las Vegas, Phoenix, Portland, Seattle, and Salt Lake City are all fantastic in my mind so I wouldn't want them to change up their strategy. For me, Portland is the best big city in the game currently (with Seattle a close second), so if Denver is up to that quality (which at the moment it appears to be) then it'll be a success in my book.

edit: I reread this and I don't mean that cities like Boise are less interesting than the big ones, I mean that I would rather they do something like Portland from a distance than try to get us downtown and have to make compromises.
ATS state release order concept map | Road to Moscow 2021 concept map
Western Star 49X Day Cab (Soon to be Freightliner Cascadia Sleeper) | Mercedes-Benz New Actros GigaSpace
Lamar, CO | Bern, CH
Top

russ99 wrote: ↑
22 Oct 2020 12:13
Towards the end of the video theres a giveaway of the wide GPS map, looks like Denver is only accessable from I-70 and we can’t drive through downtown, was hoping for a little of Colfax St interchanging with I-25, but probably impossible due to scale.

There are pictures in the Denver blog post that clearly show that Denver is accessible from I-25, and the GPS map you mentioned seems to show US-285 going into Denver as well.
Top

I was looking back on the concept map I drew for Colorado before Idaho came out and I definitely underestimated SCS!
(Ignore the roads that go to Wyoming/Nebraska/Kansas/Oklahoma) 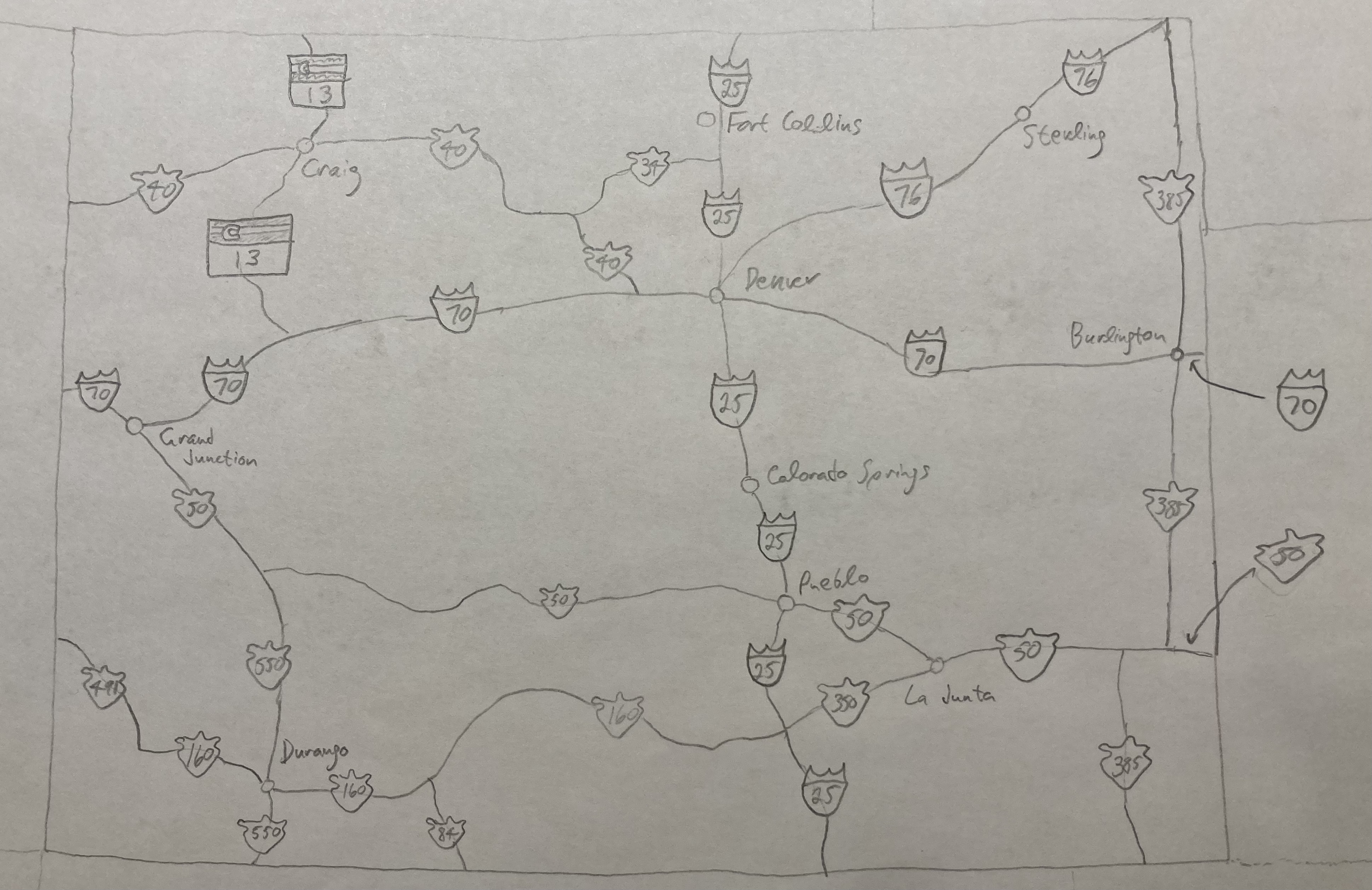 I agree with oldmanclippy. Less detailed on cities gives us a larger city in return. I also agree that Portland is very very well done. Crossing that bridge and looking at the city is what cities should be modeled after. Granted each city brings its challenges, the devs will address each accordingly. The further we go East, ohhhh man, those cities are gonna be a huge hit. We don't have Colorado just yet but Denver looks impressive and up there with the best. I'd much rather have distance cities that are more representative of real life and drive past it for sure that worry about driving thru it and sacrificing space.

In regards to Denver being accessible, no way we are shut out from Denver. Surface streets, yes that is possible but that too won't happen. We do get the Coco Cola parody along with something else in that area iirc. Most large cities, we do get accessible streets outside the city centers but accessing downtown, that probably doesn't happen with Denver size cities.

Patrik out did himself. Colorado will not rival Washington, it already left it behind. Washington is still great but Colorado is on another level right now. I don't see another dlc beating it. Texas could only do it because it can pack even more content due to its massive size, but beauty wise and the emphasis put on elevation, Colorado will King for quite some time.

Man, your map isn't bad though. Technically all your cities are in the game. Craig and I am sure La Junta too are scenic. Swap out CO-13 for CO-139 and you good. You account for that area at least. But dev cam told us CO-139 was in. I think for Wyoming, we do get CO-13 so our are part right. Same with US-385 South of Lamar. That is a Texas or Oklahoma road so that still comes. But you actually nailed US-350 right. I didn't expect that one. The biggest misses you have is Central with US-285 and US-24. But I knew if we had Patrik on Colorado, we'd get a great dlc just like Washington. But I think he did more than I expected too. I hope Colorado brings in mad cash. Its so deserving, I might have to buy a few copies myself and do giveaways, lol. That's just how confident I am with this dlc.
My post are only thoughts and ideas. Don't assume it makes ATS.
Poll: Choose Next 2 ATS States
ATS Flatbed
ATS Special Transport
North American Agriculture
Texas Discussion
Top

I'm still really pissed about the US-160/US-385 interchange not being there. It has space AND we don't need to go through another state to get there. It's still in Colorado. I don't understand why...