I remember once driving on US-93 north of Pioche (in real life) I had to stop and wait for a herd of sheep to cross the highway. If we get crossing herds it would cool if they could rework other parts of the map to have similar random events like this.

That said they would have to work out what a collision with an animal would look like. It would either be the truck just goes through it like it does to the tumbleweeds in California, or is a hard collision that stops the truck, causes damage, and maybe invokes a fine. And they'd have to do it all in a way that keeps the low pegi rating. I doubt they would really include this because of that (why we don't have pedestrians in crosswalks).
Top

they be like you on my turf I have right of way. Check out my pics I posted several pages back. I can not wait for Wyoming to arrive in ATS.
World of Trucks Profile
Top

We have the small herd of deer that cross US 101 coming from the north just south of Aberdeen by the junction with SR 4, so there's precedent to have animal crossings already, though just the one instance. I don't think the AI cares about them, though. Would be cool to have the AI slam on their brakes to avoid them. (Don't think they should actually collide. That seems unnecessary)

@flight50 I don't think we'll see 89 through Gardiner or 212. 89 is kinda redundant with 191 from Bozeman and doesn't lead to anywhere I think'll be marked. 212 just kinda dead ends at Tower Junction. It would be cool to have the small roads leading to Lake of 89, but my bet is we wont see it. Having just US 20, 191, and 14 will be it imo. I put together a quick map as I do with my guesses and some (not at all exhaustive) landmarks along the way that I think we'd see! 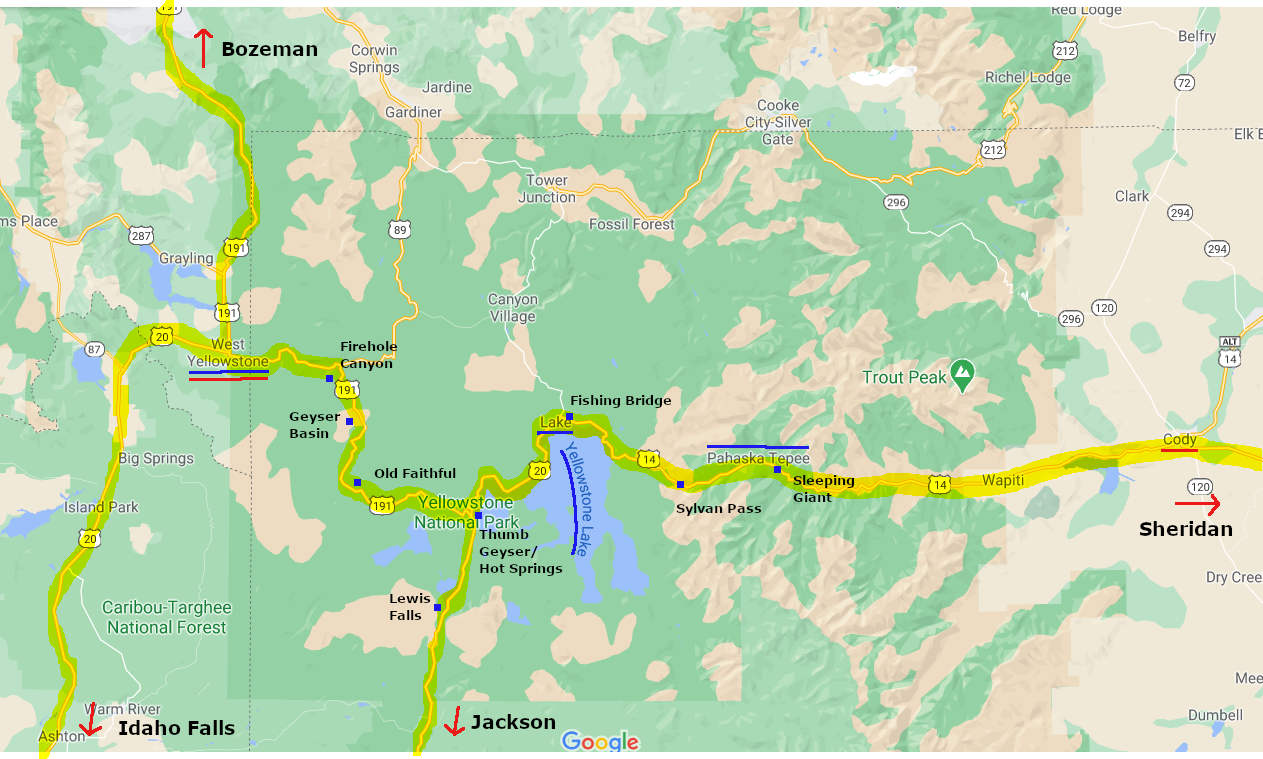 I'd love to see West Yellowstone as marked, but my gut feeling says it'll be scenery. That's why it's double underlined. I don't see us having any marked locations IN Yellowstone, maybe some drops for road construction or something that's connected to Cody/Jackson/West Yellowstone. If there were to be a marked town in Yellowstone, it'll be Lake and it'll probably be a lot like Grand Canyon Village. One Tidbit and a some road construction.
Check out my Michigan research map!

parasaurolophus67 wrote: ↑
18 Oct 2020 13:05
IF they add yellowstone they might have to code in some bison herds to walk on roads and parking lots because pretty much seen this happen on videos or T.V shows.

That is a must for Yellowstone along with geysers. I wish SCS added more wildlife crossing for all type of animals all over the map though. Not just YS. There should be a library of at least 12 animals by now. They are placing the signs but not the animals.


Xaagon wrote: ↑
18 Oct 2020 15:03
I remember once driving on US-93 north of Pioche (in real life) I had to stop and wait for a herd of sheep to cross the highway. If we get crossing herds it would cool if they could rework other parts of the map to have similar random events like this.

That said they would have to work out what a collision with an animal would look like. It would either be the truck just goes through it like it does to the tumbleweeds in California, or is a hard collision that stops the truck, causes damage, and maybe invokes a fine. And they'd have to do it all in a way that keeps the low pegi rating. I doubt they would really include this because of that (why we don't have pedestrians in crosswalks).

SCS has talked about this before. Its a PG game and trying to figure out something that works seems like an issue. I remember talking about it before. SCS can't go thru them and they can't make hard collision because you will have people purposely trying to hit them. Same with pedestrians as you mentioned and why they don't cross. The thing I mentioned before is to make it time based and only active based on the human player. Then before you know it, Washington did the deer just like I was mentioning....somewhat. This makes it impossible to hit anything crossing no matter how fast one travels. Set the spawn rate low. Then tag the crossing to distance, speed and time. Ex. Only spawn wildlife 30-40 feet away. The faster you travel, the faster the wildlife crosses the road. So no matter how hard to try, you can't get close enough to even try. I don't know if someone can edit it to change things but maybe lock it out some type of way or hard code it to not be able to be changed.

@Bedavd I am cool will not getting US-89. The biggest reason I'd like it is because the cool arch at the park's entrance. Plus I see Gardiner as a deliverable depot spot. If I had to pick a route, it would be US-191 though. Bozeman is definitely a marked town and US-89 @ I-80 is pretty close. But your map works for me. That is a path I have considered. Getting US-191 in more complete form would be sweet. We are already missing parts of US-89 in Utah and US-287 hasn't surfaced yet. So at least give more of US-191. In the Rand McNally, it actually has US-191 as the only route that is legal in YS. But the issue is, its not 100% clear as to what is legal and what isn't for thru traffic. So I'd do all of US-191. There is such as small part that crosses into YS boundaries that it doesn't matter. US-20, US-191 South and US-14 are the main culprits for park travel.

If we don't get US-14 thru the park, Wapiti is the furthest we can get. But with the other roads in the park, might as well just connect US-14 up.
DON'T BUY SHIFT KNOB FROM CSIO OR TA! YOU'VE BEEN WARNED!
*Poll: Choose Next 2 ATS States
*Poll: ATS Flatbed
*ATS Concept Map
*ATS Special Transport
*North American Agriculture
Top

Flight mentioned the geysers. I'm clueless in this regard. Are those visible from the road, US-191 or US-20?
Top

Black Sand Basin geyser on US-191

Black Pearl geyser on US-191. Opposite side in Cauliflower geyser.

One of the more famous geysers "Old Faithful" can not be seen from the main road. Neither can Grand Geyser. Enough are visible to get in though. There is also another 2-3 that I didn't link. At 1:20 scale, we will be limited on what shows anyways. Yellowstone is too iconic to miss though. It should seriously be considered. Can you guys imagine a Yellowstone blog. Better yet a Yellowstone video. Also remember the new "viewpoint" feature. So what we can't see from the road, the new viewpoint feature can. Yellowstone is the perfect example for this new feature. YS will definitely help sale Wyoming more than what people may think.
DON'T BUY SHIFT KNOB FROM CSIO OR TA! YOU'VE BEEN WARNED!
*Poll: Choose Next 2 ATS States
*Poll: ATS Flatbed
*ATS Concept Map
*ATS Special Transport
*North American Agriculture
Top

Thanks for the links @flight50. Interesting that they are so close to the road. Awesome scenery! And i agree of course, Yellowstone has to be in the game. But i have only little doubt about that, that would be a too big miss indeed (and as you said, as a consequence a too big hole in the north-west of Wyoming as well ).
Top

No problem. The thing I am noticing in ATS, is that we have a lot of people that play for the scenery. Places like Yellowstone, Yosemite and the Grand Canyon is a form of tourism. These places are no different than theses cool cities themselves. People want to see these things of beauty. When it comes to Yellowstone, most people probably couldn't tell you what state its in, but they do know about YS.
DON'T BUY SHIFT KNOB FROM CSIO OR TA! YOU'VE BEEN WARNED!
*Poll: Choose Next 2 ATS States
*Poll: ATS Flatbed
*ATS Concept Map
*ATS Special Transport
*North American Agriculture
Top

While I am really confident that SCS will find a way to make Yellowstone and the Tetons great areas, I've always been more interested in Wyoming as a transit state. Yes it has lots more natural beauty than people give it credit for, but those wide open roads in the south and east portions of the state (looking at you I-80) will be a great alternative (or even main route) for doing runs between Denver and the northern half of the map. Seattle to Denver is actually faster to do I-90 -> I-82 -> I-84 -> I-80 -> I-25, even once Montana comes (although I-90->I-25 isn't much slower). Everything else in the Pacific Northwest (except NE Washington and northern Idaho) and Northern California/Nevada/Utah as far south as San Fransisco will similarly route through Cheyenne (or Laramie if the US-287 is added between it and Fort Collins, but you get the idea) to Denver. So assuming that Denver ends up being the crown jewel that it appears to be based on the blogs, then the I-80 in Wyoming will end up being one of the most important roads in the game.
My very rough Road to Moscow 2021 concept map
My ATS DLC map release order concept map
Top

Most definitely Wyoming is underrated. I think the devs will make Wyoming as attractive as Idaho, granted its actually Wyoming's terrain. It will be better than what people think though. Wyoming will be a state that blogs will have to really be on its A game. The devs will really have to draw out Wyoming into the light. If Wyoming is next, that is great. Because trying to follow Texas and Montana won't be easy. Wyoming should have to flow Colorado with isn't good either but at least Texas or Montana can over shadow it. I see people treating Wyoming like they did with Utah following Washington.

I-80 and I-25 will be big pluses for Wyoming for sure. I agree that I-80 helps get to the PNW nicely. Whether it is the Interstates or the scenic route. We can get fairly far North up to Sheridan to bring that portion of the state into play. That sets up Montana nicely. But then here comes YS. Can't really miss it imo. Going from Idaho Falls to Billing via US-26, to US-20 to US-14/16 leaves about a 1/5 of the state blank without YS. That's a lot for a state that most might consider not getting day one or early in the release.