@averyc2506 no biggie. But yes it will be crowed in DFW. That's the biggest issue and really why they have to exaggerate DFW by adding 15-20% more than what they are thinking. Just like the page 1 map, they really have to go beyond the city boundaries. Do this and I honestly think it all fits much better than we'd expect. Some interchanges could be cheated slightly. Instead of making them 1:1. Make them 10% smaller. Worse case 15% but that is pushing it on some.

@Sora. If you'd like, I can do a cleaner photoshop version of Houston like I did for DFW. I can use your post as the guide. I'll present options like DFW. Worse case / feasible. But I agree with the I-610 being the ring, no doubting that. But honestly what I would do if I was the devs, in Houston, make Sam Houston Roue 8, be I-610. That spreads I-610 out massively. Sam Houston doesn't need to be in the game imo but I-610 is critical and needs as much space as it can get. Just like stretching out DFW, I think using Sam Houston as 610 works great. At least that is how I vision Houston. The ring around Houston should be about half the entire DFW area imo.
DON'T BUY SHIFT KNOB FROM CSIO OR TA! YOU'VE BEEN WARNED!
*Poll: Choose Next 2 ATS States
*Poll: ATS Flatbed
*ATS Concept Map
*ATS Special Transport
*North American Agriculture
Top

so in my signature below is my my maps for texas, im currently working on the i-35 corridor. i currently have denton, ft worth, dallas, waco, killeen, austin, san antonio, and laredo as marked. i put temple as a scenery city at the end of i-14.

i was also wondering what they will do with midland and odessa, since they are basically the exact same size, and they are so close to each other. plus you cant have one without the other..
Top

@flight50 option 2 would capture DFW well. Didn't know there was a GM plant in Arlington. There is a Costco in Dallas off of Mountain Parkway. Use to load out of Taylor Farms off Cockerell Hill all the time.

@averyc2506 just make it one city and name it Midland-Odessa.
Top

was just looking around texas, and found this thing near texarkana... looks really interesting and it seems like they would add something like this. i know @flight50 mentioned a while back that scs tends to steer away from military industries, but once we get more east, there is a lotttttttTTTTTT more military bases, so they should definitely look in to them.

also i think that they should add paris as a city, just because of the texas version of the eiffel tower thats there

I really enjoyed making the El Paso concept map, so I made another one, this time for Odessa and Midland. A variety of new oil and gas prefabs can be employed for these cities, alongside old prefabs. Let me know if you guys have any suggestions. 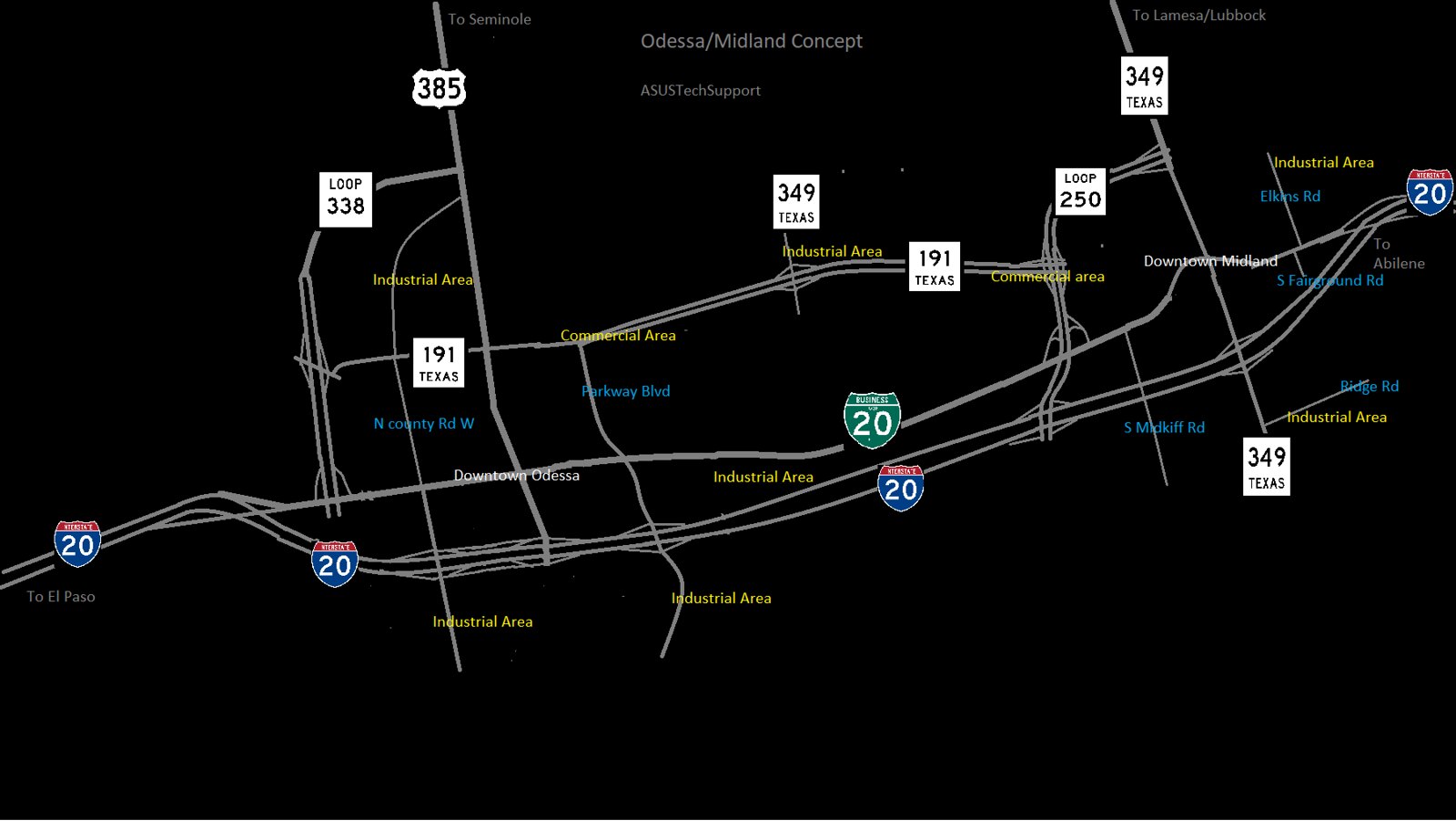 @ASUSTechSupport looks good. what application or website do you use to make them ?? they look like really good
Top

Made it using Microsoft Paint
Top

@ASUSTechSupport oki thx ill be checking that out
Top

I reckon they should just forget about DFW altogether

@ASUSTechSupport. That's another pretty nice looking map. I encourage you to continue. Regardless what I say or anyone else, your maps are your thoughts, nothing wrong with expression your vision.

Now for Midland/Odessa. I like it.......but what you have may be a little too dense for that area. There is tons of room to pull that off though. But at 1:20 scale, your map might end up being close to what DFW ends up like and that's too big for Midland/Odessa. both those together is not even the size of the mid cities in DFW. Mid cities in DFW are the cities in between both Dallas and Ft. Worth. I'd remove business 20 or TX-191. We won't probably won't get 3 road parallel in Midland/Odessa that are so close together. I could be wrong though. But 2 is fine. Here in Texas, we run a ton of service roads/feeder roads. You won't find many major interstates/US highways that won't have them. Off these roads is where a ton of business are. I-20 is 100% in. Off that, we can get the service road and companies off of it. So the companies can either go on the service road or on TX-191. We wouldn't really need business 20. Now there is a chance we can have all of it but SCS would be making that area too dense at that point. They will need a ton of that space in Midland/Odessa for oil field and there is a massive amount of them.

I don't think TX-349 makes the game to the degree you show it. We only need US-385 to get North and South of I-20. If TX-191 is not in, neither will any of the loops imo. All we'd need are main roads to get to I-20. They can make density with all the surface streets you have though. Another point about I-20B is that its not much of a trucking route. Its a STAA route but not a lot of traffic as the rest of the area.

Oh course some people will read my comments in this thread and assume that I am saying its my way or its wrong. Let me set the record straight. I am only giving my two cents just like anyone else would in this thread/on this site. I get accused a lot for thinking things are my way or the highway. I simply just contribute to the conversation. When I agree everything is fine but the moment I disagree, people make me out to be arrogant or a butt. That's not the case, its just my opinion. If someone ask for it, I will give it.
Last edited by flight50 on 22 Jun 2020 16:36, edited 1 time in total.
DON'T BUY SHIFT KNOB FROM CSIO OR TA! YOU'VE BEEN WARNED!
*Poll: Choose Next 2 ATS States
*Poll: ATS Flatbed
*ATS Concept Map
*ATS Special Transport
*North American Agriculture
Top
Post Reply
142 posts