I'll quote this for easier understanding.

Steering wheels...
So it looks like each truck has a couple of factory options, the rest are part of the DLC pack. Thing is, for example, the Kenworth W900 factory wheel has all sorts of buttons and controls on them, as many real life steering wheels do. The ones in the DLC pack are just a wheel. Seems like you would sacrifice a ton of functionality for something cosmetic. So are any of these DLC wheels at all realistic? Or do truckers just stick with their factory steering wheels?

Yes, some drivers will not use those buttons and so would prefer the classic "a wheel is a wheel" wheel. That said if you are talking bout an O/O (owner operator) that spec'd out the truck then they would order it without the wheel. Most however purchase used vs new, and so if it came with one they decide from there.


There are really to many reasons to list for choice of stacks, but in general the heavier your average load and the stronger your engine the more you want dual stacks. Most fleet trucks (large company trucks) will be spec'd out with single stack to save weight and money as they always choose the lowest HP motor they can get away with and still have decent fuel economy.


Transmissions...
Why do some of the transmissions with lower gear counts/lower stats cost more? So far I've stuck with Eaton 18 speeds because well, do trucks with the most HP really use a 13 speed? (I don't use any with retarders, I just use engine brake 90% of the time) But yeah, why would a 6 or 7 speed be further down the list (thus more expensive and supposedly "better") when the stat values are so much lower? If your truck is something with a sleeper that is meant for long highway hauls, would anyone ever even consider a 6, 7, or 10 speed for a truck like that?

Game thing with prices really. Prices irl will vary greatly between shops, even if using some of the big chain shops like Rush. As to the gear numbers... Again general rule here cause way to many factors to list... Light loads will generally use a 10 speed or less for fuel savings (specially if they are LTL/Local), medium or average loads (think reefer) will use 10 or 13 speed, and heavy loads or specialty carriers will use 13 or 18 speeds with the focus mainly on 18 speeds. Personally after 17 years of driving I can't say I've ever heard of someone trying OTR in a 6 speed, but they must exist.. though probably dedicated to light loads (frak trailers and the like).

All of my trucks were 10 and 13 speed, 450 - 550 HP dual stack as I tended to haul heavier reefers, bulk, and/or flatbed depending on the season of my career.

O/O tend to customize their trucks to the nines because we trade a life with a wife, house, 2 kids, dog, white picket fence, and a corner office job for a 200K 1 bedroom mobile studio suite and the ability to never be in one place to long. Drivers also tend to be very prideful and boisterous (think Cowboys), and so showing the pride you have with customization is how they do it. Also, we think differently then most. To us, putting a row of chicken lights on the front bumper/ visor/ sleeper... getting that Galaxy or Cobra, etc is the same as buying triple pane windows for a normal house. It's not an upgrade or customization, but an investment. Again, it goes to the pride thing. It takes a special kind of crazy to live a life OTR, and if it weren't for my heart I'd still be out there doing it instead of here staring at a screen. (Also if you are single, what the heck else ya gonna spend that cash on?)

Hope this answers some of your questions.
Roll Tide
Top

Sure does! Thank you for that, I appreciate the thoughtful response.

Another question about the steering wheels...if a trucker is eschewing the factory wheel with all the easy access buttons and just goes with a "wheel is a wheel" type wheel, well, how to they get those functions back? Like if the cruise control is on the factory wheel buttons, how would you operate cruise control with a regular old wheel that got rid of all those buttons?
Top

Well, it's a crap picture that I took from the sleeper in my prostar, but if you look next to my GPS you'll notice blank "slugs". Those empty slots can be filled with rocker switches and/or toggle switches for those functions. 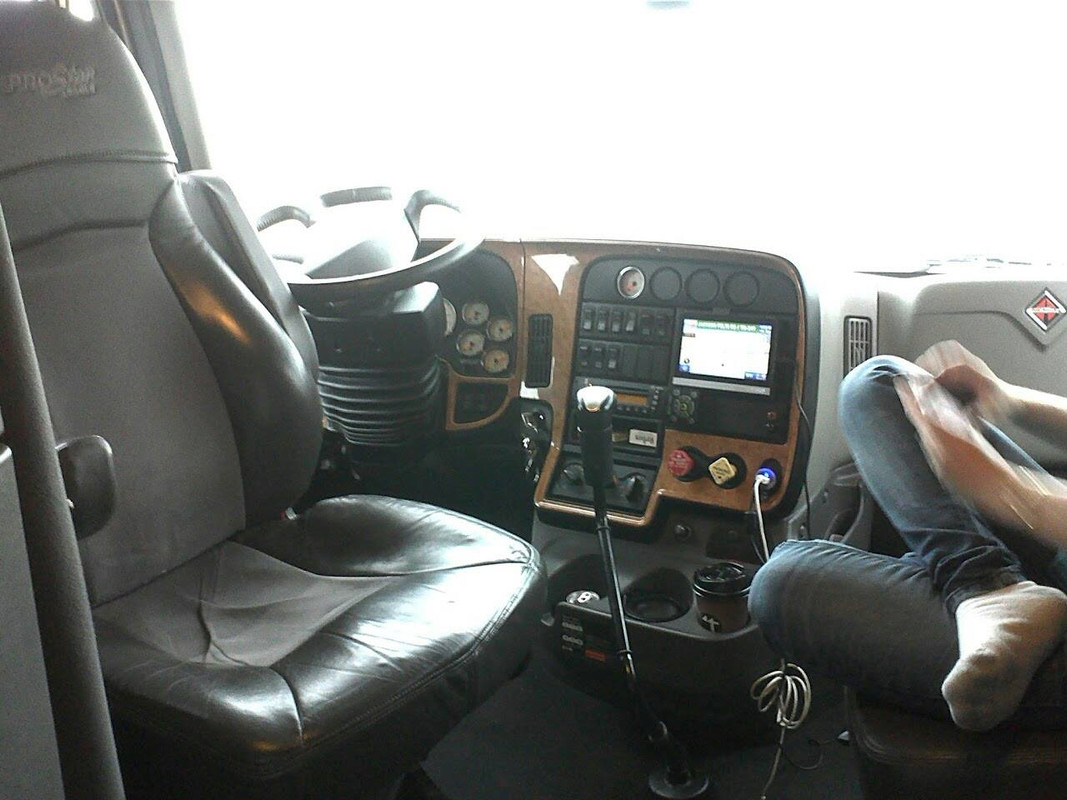 Those buttons on the steering wheels (truck/car/or tractor) are really nothing more than toggles that have been moved to the wheel for convenience. So re-relocating them is pretty easy and fairly cheap, though most of us in newer truck choose a rocker switch over a toggle. However if going for that classic look, one would choose toggles, probably with incandescent lights in them and glitter.
Top

Thanks @Deranged_Maester, though I must say moving cruise control all the way over to the right, past the GPS, seems like it would be might inconvenient to me...is there anyone that would actually move those controls that far away from the wheel?
Top

Some trucks come with extra switched preinstalled from the manufacturer too. That way, if the driver ever wants to rearrange the switches or perhaps add new functions to the truck such as beacons or work lights (or in this case relocating functions from the steering wheel), they already have switches they can use for that. If I recall correctly, the extra switches are already prewired to the fuse box, so it should be really simple to move an existing function to a new switch with minimal wiring. Here's an example of spare switches on a Peterbilt. 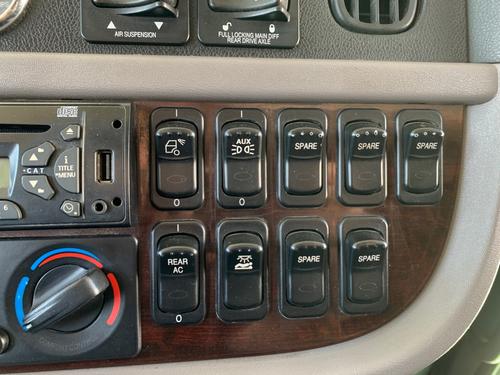 Yeah, it's really not that big a hassle really. in mt Prostar, the top row, two left most switches are |Cruise On/Off|Cruise Speed Increase/Decrease

So really they are right there by your right hand.
Top

Interesting. Seeing as I've only ever set foot inside a semi-truck maybe once in my life that I know about, all of this is news to me. The idea of putting cruise control on a switch panel, away from the wheel, isn't insane, it's just a foreign concept to me. But it's cool to know that's not only possible, it has been done before.

I did some very brief looking into the dual stacks thing...correct me if I'm wrong, but it seems if you have dual stacks connected with the Y-pipe configuration that @loco4string was describing, you're not getting any actual benefit from a second exhaust stack. They'd have to be independent systems to get the real advantage of dual stacks, right?
Top

That would be correct the computer controls most of that now so if there is an increase it would be minimal. Like maybe 5% at best, on older trucks it is still a benefit with the y-pipe just not as much as running to each head on the motor. Granted I am using automobile knowledge mixed with some jet engine experience.
Top

I like the look of the headache racks in the game, just wondering what kind of truck (or person) would have them.
Top

Really depends on the carrier. If hauling a lot of various freight you'll see more O/O with the headache rack on the truck as they can switch trailers without losing storage and the safety of the rack and by not having the headache rack attached to the trailer they can move the load further up the trailer. For companies, they almost never use the frame-mounted racks as it weighs more and for their purposes, it doesn't provide any benefits. Usually you will find the frame-mounted ones on company trucks where they haul long loads that hang over the trailer (think I-beams, or long rebar bundles). They will use the extra 1 to 2 feet for load balance and to not purchase the specialized trailers.

As for having both, the only time I've seen that is when an O/O is leased to a company or broker that has a majority of the trailers without the headache rack and in this instance he was given a load on a trailer with one. This typically happens (if leased to a company) when they are bringing in new equipment.
Top
Post Reply
28 posts