To add to the list : Kickdown switch simulation for economy and normal power mode for the adaptative transmission (either normally, or through an activable option, which would also simulate the fact that many fleet trucks have the kickdown switch removed)

See this video to see the difference between the two :
https://youtu.be/FxTOvnJ0Jkg?t=155
Top

I've only seen this matter addressed one other time in these forums, so... Relatively new guy here to ATS, but I've put several thousand miles on the game, and I'm quite impressed for the most part. Most roads aren't exact to the prototype roads obviously, but the feeling of those roads are areas has been very well captured, so well done. One thing I've noticed that's missing though is something that, for anyone that regularly drives over the road in the US, is quite a common sight: what i call "mileage signs" or "miles to go signs".

In all the ATS driving I've done thus far, when out on the open interstates, I've not seen one of these signs, and honestly, it does affect immersion because these are ubiquitous in the states. I've attached a few semi-random examples from images on Google search for you. I would imagine these would be easily implemented as they're only scenery items along roadways and not interactive. The only thing would be placing the signs in the worldspace, and then giving them in-game mileage numbers from the signs to the destinations.

I'd be very appreciative if you'd consider these additions. Otherwise, great sim, very enjoyable. Keep up the good work. 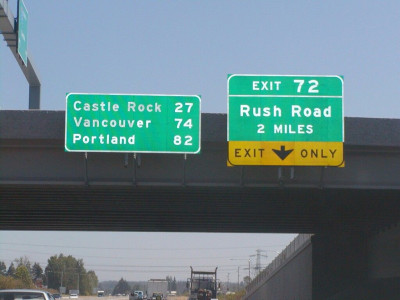 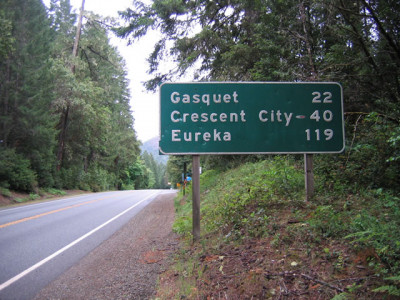 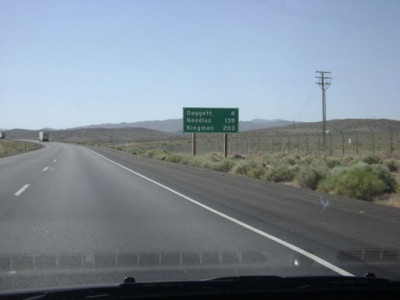 @Scout515 the only one i can think of off the top of my head is going south on the 15 in ogden, under an overpass says "salt lake 31" but yes, i do agree that they should add more of these !!
Check out my concept map of Hawaii !!

The Sierra Nevada mod adds these mileage marker signs. It definitely a nice touch. I do remember us debating about it on here though. The summary was, do you go for immersion or do you go for realism. Because @1:20 scale, the realism part is next to impossible. But immersion, most definitely add them. I am sure if natvander can squeeze in another sign to account for, he will.
DON'T BUY SHIFT KNOB FROM CSIO OR TA! YOU'VE BEEN WARNED!
*Poll: Choose Next 2 ATS States
*Poll: ATS Flatbed
*ATS Concept Map
*ATS Special Transport
*North American Agriculture
Top

I've tried to make distance mileage signs in the map editor with the current signs, but I just could not find a way to properly format it with the exception of the small one line sign that allows you to put one city. I think the real limitation here is that the asset team has not made a sign or sign template suitable for this type of sign yet.

At supersobes that is more than likely it. Reforma has a 2 or three liner for Sierra Nevada. They know the editor a bit better though

. But I am sure natvander is fully capable of doing it for SCS. Its a matter of, do they do it or leave it alone. That is a lot of roads and extra work. But if they are going to do it, better do it now while ATS is small. As the map keeps growing, it puts things that much further behind.

I think the ATS mappers just need to learn the signage better and not leave it all on natvander. If they can at least place a sign that has xxxxxx on it or something, that leaves a red flag for someone internally testing to come back thru and polish it with correct info. Designers are using Google maps and signs are indicated on these map. Drop it in as you go and polish later. If natvander is having to drop them in and correct them, that get ways more time consuming. Now if that's the way he prefers it, then that's a different story.
DON'T BUY SHIFT KNOB FROM CSIO OR TA! YOU'VE BEEN WARNED!
*Poll: Choose Next 2 ATS States
*Poll: ATS Flatbed
*ATS Concept Map
*ATS Special Transport
*North American Agriculture
Top

In my opinion, it would be best if there was a sign asset with two separate editable areas that follows the format of a distance mileage sign. That way you can just click on each area and type the city names and mile numbers without having to worry about trying to make sure everything is lined up and formatted correctly because it's already pre-done. 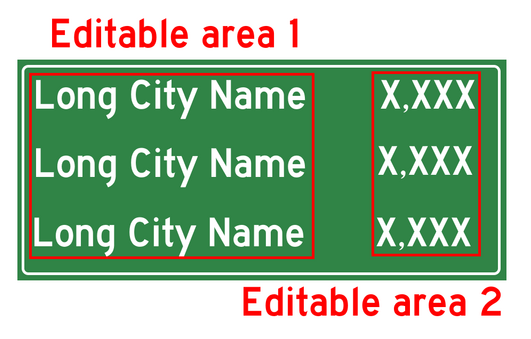 Makes sense. I like how clean that looks. I suppose the City is left justified and the mileage is right justified. Maybe someday that can come. Even if its only on the Interstates, I think it adds a lot. There are too many back roads to keep track of in ATS and it will get worse. But Interstates is where it counts the most anyways imho. Well you know where you takes that sign.