Since graduating from college this April, I've spent a lot of time just kinda sitting around not doing much, particularly since I can't work for more than a few hours at a time. For that reason, I kinda needed a new project to work on that I could spend a few hours a day on here and there and get a little rush of serotonin for completing small tasks. 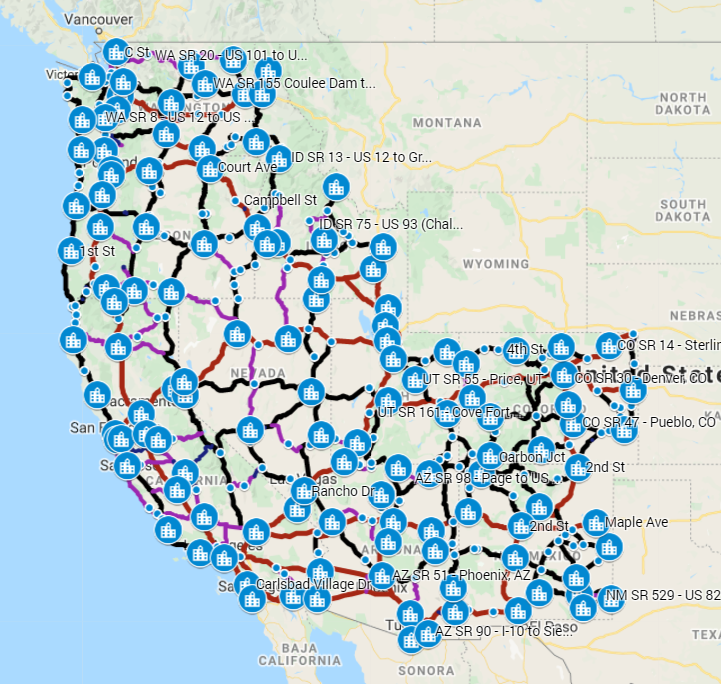 I'm not sure what the purpose of the map is really, aside from people looking at it and thinking "huh, interesting" before moving on with their lives. Making it, however, was tons of fun! It's really shown me not only what SCS decides to show as they build their version of the U.S., but somewhat more importantly, what they decide not to show. It was also really interesting to see how their mapping skills went more toward imitating real-life as new DLC's released. Beginning really with New Mexico there was a sudden shift to depicting the true street layout of cities, as opposed to the more vague "reminiscent" versions we got in CA, NV, & AZ.

Anyway, I just thought I'd share this with everyone here! I should also mention a few things, I didn't map the roads of Las Vegas yet, as we've been teased a rework of the city. Once we get that I'll put that together. Furthermore, as a form of civil protest and also because I think I'd pull my hair out trying to figure it out, I've decided not to map LA or SF until they get some love either.

I'm sure I've missed some spots, so feel free to point them out! Most roads are taken from either in-game signage or landmarks. Some are just wild guesses, particularly as it comes to the base map (Looking at you, Huron, CA). If you think I've done a town wrong, mention what roads you think are represented instead!

This is really awesome!

I like how you went through all the detail to include not only the main highways, but also all of the city layouts and individual roads and delivery points. Very cool!

Thank you! I still want to add more markers for thinks like rest areas, gas stations, and landmarks that are in the game, but that'll be a really long term task particularly in the base map. Short term, I'm absolutely going to update it with the new states. I just thought I'd share now since the vast majority of roads have been added!
Check out my Michigan research map!

Very nice work! This kind of thing is right up my alley; I even made a similar map, which is in the maps album in my signature.

The only things I'd suggest changing are removing I-5 in San Diego between the Midway District (where I think the 5 currently ends) and Downtown, as well as adding CA 14, at least between I-5 and CA 58. Based on the road trajectory in the game map, it looks like the 14 continues past the 58 to join the 395 at Bradys, but going by the USA.dds file, your connection of the 395 to the 58 is correct, or at least what was intended. The Antelope Valley in ATS could sure use a small rebuild.
Check out my Imgur page for ATS screenshots, railfanning, ship spotting, and more!
Latest screenshot album: Vol V: the Colorado Experience

@rbsanford You're right. You just made me realize I never finished San Diego! Oh great... that'll be fun to figure out haha. I-5 was the first road I mapped when I started this in late March, so I had no idea what I was in for just yet. I did also miss CA 14. I did California in chunks, moving on to do different states in between so it makes sense that's where all the mistakes are concentrated. I was considering whether or not to break off of US 395 and go south on CA 14 at Indian Wells, but I tended to default to what the road is marked as in-game if there was a question.

I've added CA 14 and I'll get to building San Diego soon. I've never seen your map before! It looks great. It's much cleaner than mine, especially as I add gas stations and delivery points.
Check out my Michigan research map!

This is really cool! There was a thread in the general forum where there was a guy who said he loved having a tablet where he did a screenshot of the in-game map to use to navigate without GPS. If I can easily find it again I think I'll post a link to this! I get a feeling the guys over there doing that map navigation would love this!
Top

Can you make a map like this for the navigation? (Just a question out of interest)
Top

@FirestormMk3 Thanks!! I really appreciate that. I hope I can figure out other ways to use the map in the future. I think the real use for it will come down to the roads featured in each town. I did my best to figure out exactly which roads were shown.

@Dirk221 You mean to show up in the game? That’s a bit over my head unfortunately. If someone wants to create that though I absolutely welcome them to it!!
Check out my Michigan research map!

Check out my ATS IRL map!
*Colorado added! LA, and San Diego are unmapped out of protest for their future rework*
Top
Post Reply
18 posts