Bedavd wrote: ↑
02 Jun 2020 18:46
I'm not sure what the purpose of the map is really, aside from people looking at it and thinking "huh, interesting" before moving on with their lives.

Just saw this linked in the Driving with no navigation thread. I keep track of my own log and I was just going to start documenting which streets I take for each delivery, but I realized many streets, especially in the cities/towns don't have street signs or labels, so I definitely found a purpose for your map lol. So yeah, nice work.

Also as you mentioned, it's interesting to see what did or didn't make it into the game. Not to mention the perspective it gives you. We all know the game is scaled down, but sometimes it's difficult to understand by how much, but with this you can see how a square block in game might actually be 10 square blocks in real life lol. Like I'm looking at Farmington now because I have a load to Gallup, and the in game map has Miller Ave, then Lake St, which looks like one block, but in real life there are at least 8 side streets between them. At least in Farmington all the streets appear to be named in game, but Gallup doesn't appear to have any streets named, so it's already been a big help.

Also looking at your map, I'm envious of the future generations who will get to play a trucking simulator on a 1:1 scale with their VR super computers, or will it be a nightmare lol? Would anyone actually sit there for 17 hours to drive from Portland to Salt Lake City?

I've driven 160k miles on my current profile, but that's actually only about 8k real life miles xD. In 209 hours. Which means I only would've completed 15-20 jobs by now at a 1:1 scale instead of 274 with the 20:1 scale. Only the diehards would probably play it at that scale, or they'd take a lot more shorter deliveries. My longest delivery was Seattle to Hobbs, nearly 2000 miles and 37 hours, but it only took 2 hours at this scale. I don't know if I'd attempt that at a 1:1 scale lol. That might take 2-3 weeks to complete.
Top

@Reignman Thanks for the feedback! Most of the streets I decided on for the base map are pure guesswork. I tried mainly to recreate the layout of the city if I could (See Winnemucca for a good example of that). If there was a notable landmark on a streetcorner, I tried to make that true in-game as well. Moving forward it'll be much more accurate and easy, I've already added the versions of Boise & CDA that we can see in the Beta and those roads were FAR easier to map. Still had to take some liberties in a couple of areas, but compared to Winnemucca or Reno or [insert any California city] it was a breeze!

I'm not too sure I'd be interested in a 1:1 map of the game. At least not for the entire US. I remember a while ago someone was working on a 1:1 map of a portion of the Netherlands for ETS2, and that seems like a cool idea, but of the whole US?! oof, that would be an insane commitment just to do an interstate job, let alone across multiple.
Check out my Michigan research map!

I've updated the map to include the roads found in the Idaho DLC, as well as the Vegas Rework and the added roads in the 1.38 update. 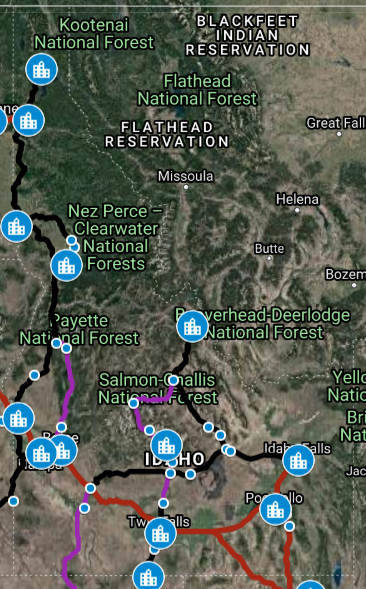 Check out my Michigan research map!

Hey everyone! Just a quick update on the future of this project.

With Colorado right around the corner, I'll obviously be adding that once it's released! I've already begun to add roads that we have access to already and I'll complete it over the course of a few weeks following release. Also, if there were fake roads in ATS that weren't real IRL, I typically left them out. In the interest of utility, I'm going to connect everything up as it is in-game. That'll also be a long term thing, mainly because I've gotta find them all

An exciting new feature has been added, too. If you take a look around Washington, you'll see I added the depot locations in each town! It can be a little difficult to see the icons, so I've decided to change the map background into the standard Google map rather than the satellite view to make it easier to see. Also, be sure to click on each depot for a screenshot of the entrance to help you locate it during your journies! These will slowly be added to each state over the coming days/weeks/months as I find the time to update. Hopefully this will add a bit more utility to the map! 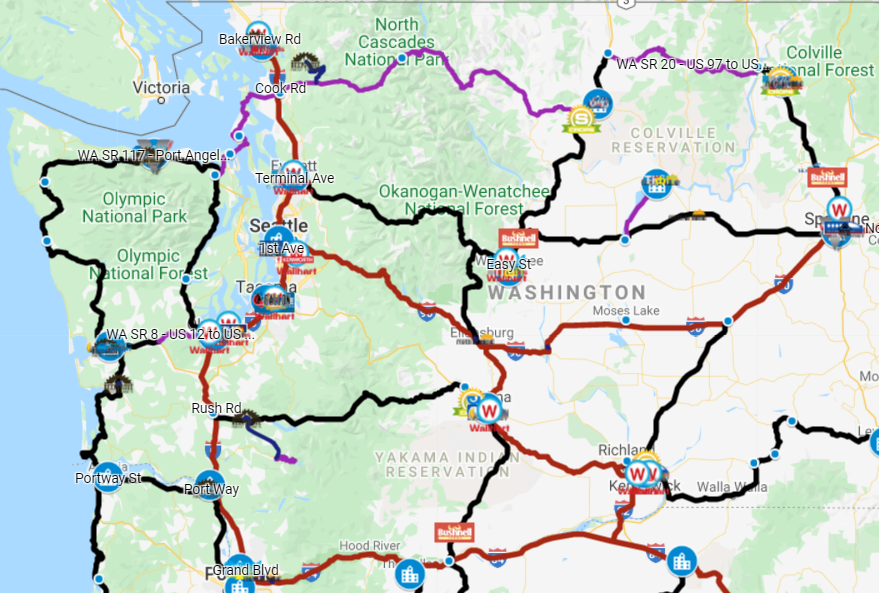 This is truly amazing. A great and very useful addition to the ATS experience! Thanks a lot for your time.
Top

Map has been updated to include the roads added in the Colorado DLC! 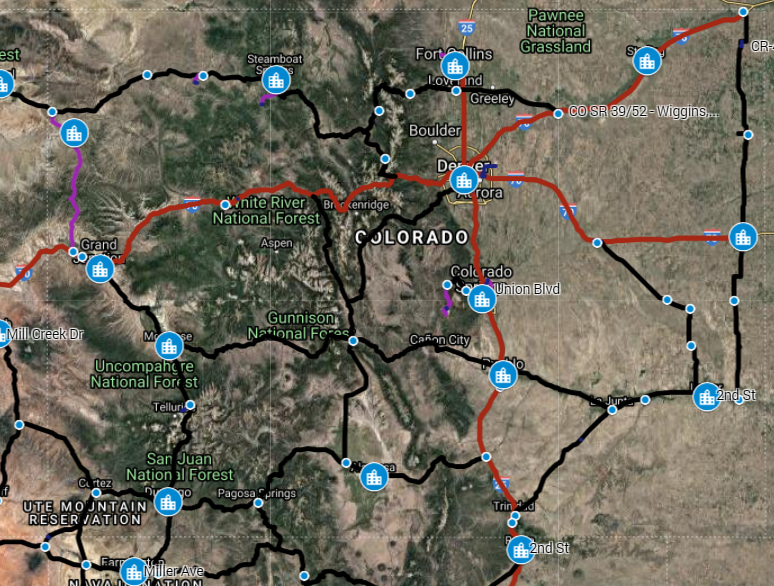 Also, an update on the company locations! I've added every depot to WA, OR, ID, CA*, and NV. Will hopefully be slowly adding in UT, CO, AZ, and NM depots over the coming weeks. These depots are turned off by default, but can be enabled by checking the "Companies" box located in the menu on the right side.
*Still refusing to add depots and roads to LA and SD because I want them to be reworked.
Check out my Michigan research map!

Thank you.
Very nice to get it so soon, that we can use while exploring the DLC map.
Top

Ahhhh man, Colorado is out already? I don't even have Idaho yet. My old crappy PC couldn't handle the jump from 1.36 to 1.38, so I'm stuck on 1.36 until I get my new PC built, which isn't going very well because prices have shot through the roof.
Top
Post Reply
18 posts