Ahhh ok lol. Anyone know what frames are possible with ATS?

Yeah I don't know if I'm cursed or what. I made it all the way to the payment screen with the $175 price, but I decided to think about it some more. A minute later I went back to check and the entire part picker site was down lol. When it finally came back up, the 3600 still says $175 at Walmart, but now when I click on it, it says $250 like last time. I'm probably set on waiting until October no matter what, but that's just weird.

To prove I'm not smoking anything, here's the price history of several places on Amazon. The circled dots are the brief moments when Walmart was selling it for $175. You can also see how the price has steadily climbed in the past month lol. So I don't know what Walmart or Amazon are up to. The MAX fps depends on the refresh-rate of your screen. V-sync ties into that refresh-rate to stop tearing. For what its worth, your eyes-brain won't notice any difference between 60fps (60Hz screen) and 144fps (144Hz screen)

Reignman wrote: ↑
16 Sep 2020 22:00
Yeah I don't know if I'm cursed or what. I made it all the way to the payment screen with the $175 price, but I decided to think about it some more. A minute later I went back to check and the entire part picker site was down lol. When it finally came back up, the 3600 still says $175 at Walmart, but now when I click on it, it says $250 like last time. I'm probably set on waiting until October no matter what, but that's just weird.

Ok I think I have a theory on that now. I only ever see Walmart listed on the Amazon part picker site when they're selling the 3600 at $175. After they sell out at $175, they disappear from the list until they get a new shipment, and they always sell out in the matter of minutes, which is why we only see dots on the graph instead of a continues line like the other sellers. When I click the buy link at $175 and get the $250 option, it means they've already sold out at $175. Unfortunately you can't back order at that price point.

There might be some good news regarding the 3600 though. Prices might be coming down already. Amazon itself is now selling them at $175. Haven't seen that in over a month. And even though they're sold out at that price, I can still back order one at that price, unlike Walmart. I'm still going to wait however. I'm waiting for GPU and RAM prices to drop anyway.


Crocko From Oz wrote: ↑
16 Sep 2020 22:03
The MAX fps depends on the refresh-rate of your screen. V-sync ties into that refresh-rate to stop tearing. For what its worth, your eyes-brain won't notice any difference between 60fps (60Hz screen) and 144fps (144Hz screen)

Yeah sorta, max FPS depends on the refresh rate (Hz) of your monitor, if you have vsync on (no tearing unless your FPS is below your refresh rate), but you can still technically push more FPS with vsync off, but like you said you'll see tearing because the monitor can't display the faster FPS of your GPU fast enough, so it's probably better to have it on if your GPU can push more frames than the refresh rate.

Adaptive sync (g-sync and free-sync) monitors do the opposite. They adjust the refresh rate of your monitor to match the FPS of your GPU. I bought a 144Hz adaptive sync monitor, so I'll be able to push up to 144 FPS without tearing. And like you pointed out, most of us humans won't notice the difference ... but my OCD will be aware of it lol. The real crazies are the ones who need a 265Hz monitor haha.

I wasn't necessarily looking for a 144Hz adaptive sync monitor, I just wanted an affordable monitor capable of delivering 1080p, but I found a great deal on this one, and even though I probably won't notice the quality, I would still like to take advantage of it as much as I can, to appease the OCD demon in me xD. If the 1660 Super GPU can do that, then it would be good enough for me, but if not, I'd like to get the next best card, the RTX 2060, so I'm still trying to figure that out while I wait for prices to come down.

Linus Tech Tips did some interesting testing with frame rates and how it affects reaction time and performance with people of varying skill levels. (skip to the end for results)
They have other videos where they did some testing to see if people could even tell the difference between certain frame rates, refresh rates, and even resolution. Spoiler alert: humans struggled to tell the difference just by looking at it, but the reaction tests prove there is a difference. To be fair, it probably only matters to professional or competitive gamers in first person shooters. It's not helping anyone is ATS lol. I've been playing it just fine with medium settings in 720p at 18 FPS for almost a year. Having said that, it's time for an upgrade, and even though I've tolerated low quality for so long, it doesn't mean I can't now spoil myself with the best quality I can squeeze into at my budgets lol.
Top

What Linus explains on that video is that more FPS, up to certain degree, is better when you reed really high reaction times. That means when you play frenetic games and the need comes because you compete on them more than just play. For "gentle" simulation games, if the graphic system do right its job and the FPS are stable, even 30 are sufficient. The same Linus, or Jayz or a lot other people are saying the same when noticing they can play perfectly the MSFS2020 at ridiculously low FPS compared to what they are used to in other games with their monster rigs.

You are going to be more than fine at the FPS the 1660 Super or equivalent could handle and you will have extra money in the pocket to other thinks (like that excruciating CPU that don't stop being expensive). If FPS counters doesn't exist, lots of players would live way happier.
Top

Well I found a GPU that falls between the 1660 Super and the RTX 2060. AMD's Radeon RX 5600 XT. The 12Gbps memory clock version. The 14Gbps version is on par with the 2060 and is a little bit cheaper. The 12Gbps version falls perfectly between the 1660 Super and RTX 2060 in both price and performance. In fact sometimes it performs nearly as well as the 2060. But I've heard horror stories about AMD and it's drivers. Plus their video encoding isn't as good as Nvidia. Originally introduced to compete with the 1660 Super, but recent BIOS upgrades have allowed it to compete with the 2060 as well.

Benchmarking puts the 5600 XT closer to the GTX 2060 than the 1660 Super, so that looks like the best price to performance deal. But it's an AMD lol. I'm trying not to be team green biased, but they do have the better reputation and more reliable drivers. I still have a month to figure it out, and to wait for prices to drop.
Top

WOW! Those prices make me glad I have the 1650 Super. I don't thing my insurance company would have gone for any of the 3 you mentioned Reignman. The 1650 Super works very well with ATS and Sniper 4, and I'm happy. Plus there's no stuttering with it like the GeForce GT 740 SC did.... but it stuttered only a little bit, and only with ATS.
Gary - CB code name: CW
I've hauled ass down the road to deliver new cars and trucks, fuel, freight, and produce. Now I'm ATS addicted to doing the same thing in a simulation.

Yeah maybe so lol, but for a good gaming rig they say the GPU should 33% of your total budget. You're lucky I didn't mention the $1500 RTX 2080ti haha. I'm not necessarily aiming for a gaming rig, but I'm aiming for a well rounded 1080p machine. Gaming, video editing etc.

When I started this PC building journey a few months ago, I initially picked out a 1650 Super, but quickly learned that was the weakest link in my build, so it was either downgrade everything else, or upgrade the GPU. I chose the latter lol. I want this to still be a pretty good PC 5 years from now, so future proofing was the goal.

With the 30 series on the market now, and Big Navi coming, game makers can now raise the bar, so I'm not sure how long a 1650 or 1660 Super will remain mid tier. They might be low tier before you know it, and I've been at the bottom tier for 10 years now xD. Not a fun place to be. I'd like to enjoy a PC for a few years before I'm back at the bottom. Plus I got that 144Hz monitor so it would be a shame if I don't take advantage of it by getting a GPU that can push 144 FPS lol.

Having said that, I realize GPU prices are insanely too high right now IMO. I think that's why they say 33%. If Nvidia had more competition, and demand wasn't so high, prices would be lower, and the rule of thumb would be more like 25%. I might end up with a 1660 Super after all, but it's all going to depend on how everything shakes out over the next few weeks with prices, available tech, and whatever research I can uncover to help satisfy my peace of mind. That @Some newbie driver guy can be pretty persuasive, so who knows what he'll make me change my mind on next xD. It's helped steer me in a better direction when I throw things at him to see what pearls of wisdom he throws back.
Top

Don't forget when looking at the GTX 1660 SUPER, also look at the GTX SUPER OC version (which is what I've got). Just some reference comparisons from Gigabyte* between the cards (*Gigabyte only used as it's the brand of card I have):

This is the card that I now have installed in my system. Yesterday I ran some benchmarks (PC Mark 10 Extended) and this card peaked at 1980 MHz @ factory settings. 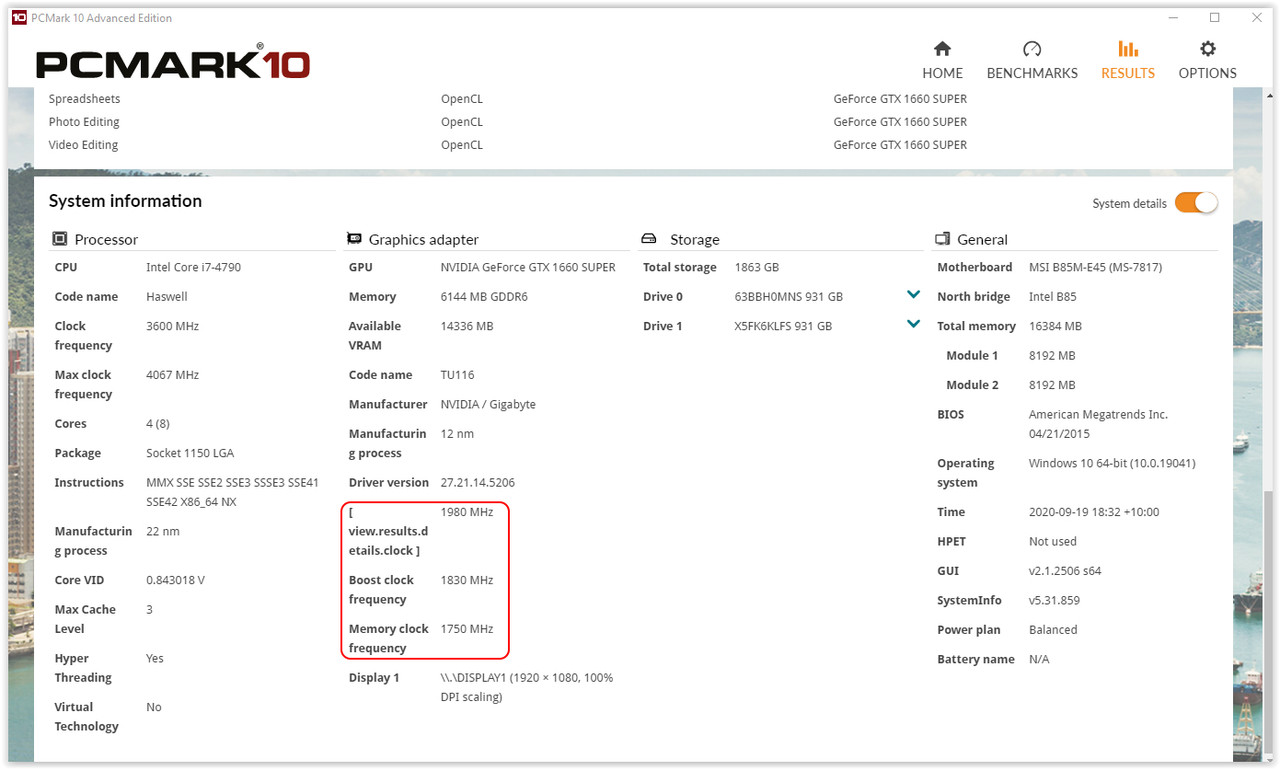