Yes, 400 series chipsets will also give support with BIOS upgrade necessary (so, B450 and X470 motherboards). And I think some B550 and X570 motherboards if manufactured recently already had the basic BIOS compatibility (is always advised, of course, to update to a newer one)

Good to see also that, due that upgradability of the AM4 socket, in "not so high" range motherboards a "flash from USB" feature is present (things than not so much ago where only found on very high price motherboards). That way, if your CPU dies, you can upgrade the motherboard for a newer one without needing an older one just to boot up to flash the new BIOS.
Top

Some newbie driver wrote: ↑
31 Oct 2020 16:44
Last but not least, @Reignman I remember you mention you are looking for a semi or full modular PSU. Aim better for semis. Full modular ones have only sense if you pretend to exchange the default cables by other fancy ones colored matching the look of your hardware. That's not your case and you will save a few bucks (or spent them on slightly better PSU) purchasing a semi-modular one.

Well I wasn't necessarily looking for fully modular, but the one I found (EVGA 650W for $90) was only about $5 more than the semi. The only difference I believe is you can't change the MB or CPU cable, which like you said, I won't be doing anyway xD. In this case, the full comes with a few more connectors than the semi so I felt the $5 was justified. But right now there's a sale on a Rosewill 650W semi for $75 (normally $100). Don't know much about Rosewill PSU's or why it's normally $10 higher than the EVGA full, but it has a 5 egg review average at Newegg with 39 reviews, with some of them saying they've owned it for 4+ years.

Sweet mother of mercy, the increase in performance is brutal. To think that a customer wanted to change a workstation two weeks ago and they didn't want to wait; their 3800XT is a nice one, but at the side of the new ones released today... OUCH!

Yeah I just watched some reviews lol. GN included the R5 3600 with it's benchmarking, and it's suddenly starting to feel inadequate lol. I wanted to build a mid tier rig, but the 3600 is starting to look low tier already. But I can't do much about it unless prices start coming down soon, and by a lot. Now I almost need to get an R7 3800x and a 2070 to stay in that mid tier range, but only if I can get them for $200 and $330 lol.


Some newbie driver wrote: ↑
05 Nov 2020 17:20
PS: Unfortunately for you @Reignman, AMD decided to bump a bit more their prices at last moment (after all, why not? they have a winner product, they don't need to play cutting prices). That means that probably the prices on Zen2 ones like the 3600X you are waiting wouldn't drop so much.

Where are you seeing the higher price? AMD said $299 for the 5600x and that's the price I've seen everywhere, except it's sold out everywhere lol, which I expected. I was hoping to see it as low as $250 by the time they released it, but that's not the case. Maybe at the end of the month for Black Friday, after this initial buying wave wears off? It would be tempting at $250. Paired with a 3060 at $350. If the rumors of a 3060 are true, and provided it's released before December lol. Because I'm already going nuts waiting to finish this build.

Not the first time I've seen some shenanigans with the Shell Shockers. One of the 2060's I've been watching has been $339 forever, then one day it was on the "Shell Shockers" for $339 lol. So yeah, the GPU prices have been just as disappointing. The best deal I can find on an 2060 is the Zotac, which is normally $339, but I can get it for $309 today ($20 sale, plus $10 promo code). I still don't consider that a good deal though, so looks like I'll be waiting a few more weeks, which I was planning to do anyway.

I started this topic 3 months ago now and never imagined I'd be waiting this long lol. I started thinking about a new PC in May, started researching in June, and thought I was ready to start buying by July already. Prices were really good in July, but as you can see by my original list, I clearly needed to think about these parts some more. And I probably still do haha. The late mouse gets the cheese, so hopefully I end up with some good cheese by the time this is done.

RAM prices are still too damn high too. $10-15 higher than they were a couple months ago when the rumors about a 10% drop were supposed to happen. GN just reported that 10% rumor again, so I'm wondering when that's ever going to happen. 10% only gets it back down to it's original price a couple months ago. I might have to consider 3200 speed or a CAS of 18 lol.
Top

plykkegaard wrote: ↑
05 Nov 2020 17:48
Current X570 and B550 boards will support the new AMD, a bios upgrade is required before installing
Unsurden if other boards will be supported with bios upgrades

Some newbie driver wrote: ↑
05 Nov 2020 17:56
Yes, 400 series chipsets will also give support with BIOS upgrade necessary (so, B450 and X470 motherboards). And I think some B550 and X570 motherboards if manufactured recently already had the basic BIOS compatibility (is always advised, of course, to update to a newer one)

Yeah not long ago you even needed a BIOS update for the 3000 series on the 400 series MB's, but I doubt that's the case anymore. This updated chart doesn't say you need it anymore (for new MB's, for used you might still need it). Early on you needed a 2000 series chip just to update the BIOS to support a 3000 series. Although AMD was willing to send you a "loaner" chip if you needed it. Also retailers would do it for you at no extra charge. Some even went through their entire stock and upgraded them before they were sold. 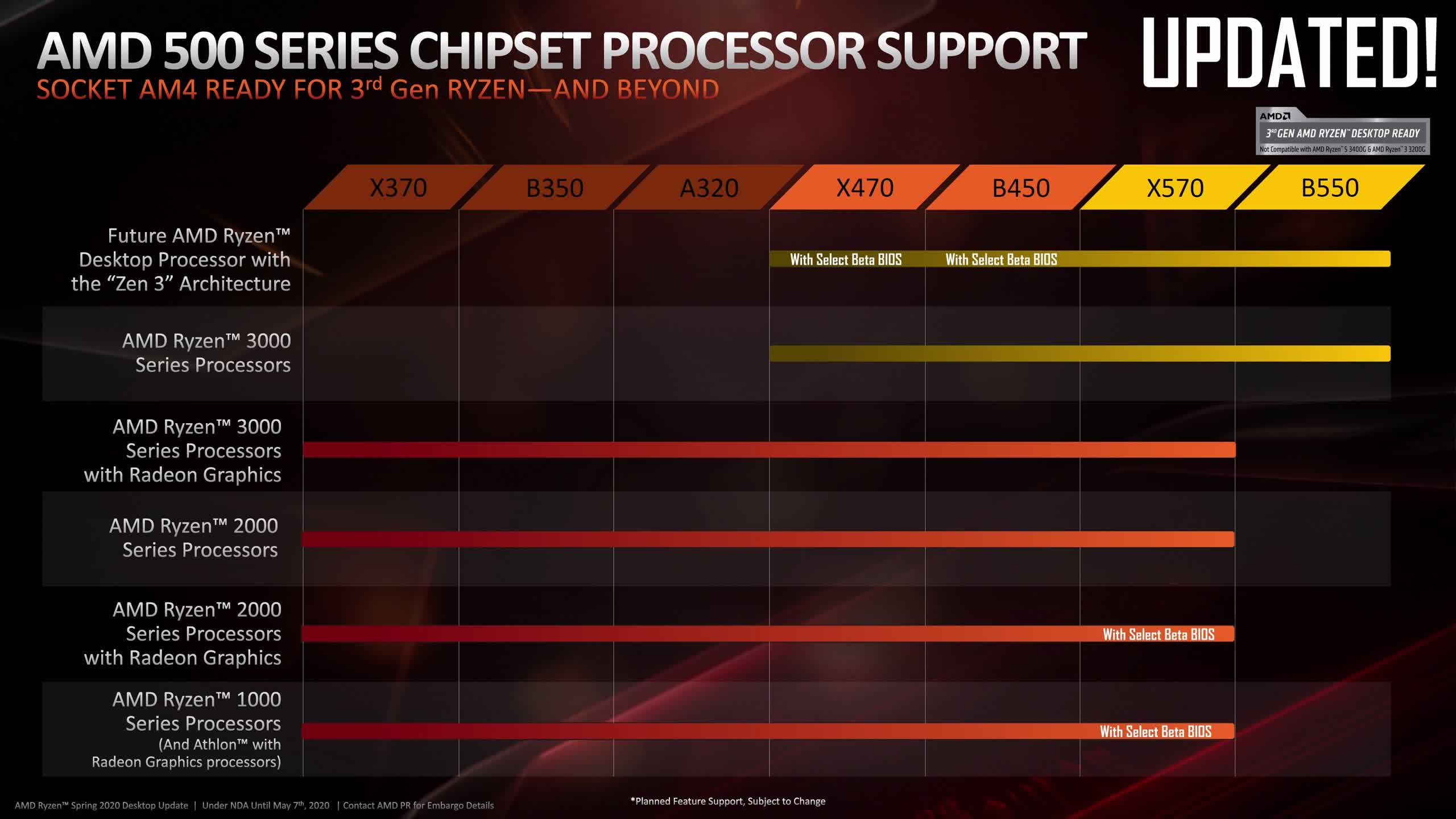 It was kinda expected/kinda leaked that the new CPU would keep the same launch prices than the previous gen counterparts. But the final official announcement bumped those prices 50$ for all of them (and those are the prices we all could see everywhere, of course). Ryzen 5 3600X launched a $249 and its newer counterpart is $299.

Of course, that means that the older CPUS will not need to reduce so much its price in order to keep being attractive for people with a limited budget.
Top

Ahh ok, I see what you're saying. I guess I never saw that rumor. $299 was the first price I heard. Well hopefully that'll be a Black Friday deal soon. After watching 5600X benchmark videos, I'm definitely getting one at $250 lol. They out perform the R9 3950X, for a third of the price. For gaming anyway, and they're not far off for other applications either. I thought that was pretty insane. I was expecting them to only be a bit better than the 3600X.

The only question would be, when could I get my hands on a 5600X or a 3060ti? They're both going to be the most popular CPU/GPU combo, probably ever.
Top

Make sure to get an MB with PCI-4
Office moved to Fort Collins, Colorado
Top

He's got an X570 motherboard, he will be fine with that @plykkegaard. BTW, Intel desperately announcing (if somebody cares at this moment) finally PCIe4 support and 3200MHz native memory to next year, 1,5 years later than AMD. Intel is going to follow their own via crucis on the next years. I just only hope AMD doesn't turn so complacent as Intel did due the lack of competence.

On the other hand @Reignman, as I told you at the very beginning, that's going a bad year to purchase a PC

No, seriously, the rig you was planning its still a perfectly mid tier, has a good value a several years in the future AND nothing prevents you to upgrade it later. You only need to add more RAM (not change it at all, if you take the 3600 one), change the CPU for a Zen 3 one in the future without changing anything else (heck, you could even target a 5950X in 4 years when that CPU will cost around 500 probably and you would think you have a completely new PC). And the 1660 Super, is decent enough to play even at 1400p unless you are a total freak of the big FPS counters. And of course, perfectly changeable for anything else in the future.

The only you need to be sure is that you aren't going to pay today prices for "yesterday hardware". Oddly, the prices behavior this year had been very strange as yourself have noticed. Heck of a year, not even the hardware prices have resisted the coronash** hysteria.

I would prefer to waste that amount of luck in playing lottery than in that search.

You can tell a lot of people are building new PC's right now because a lot of parts that I've been watching are now sold out. Motherboards, PSU's etc. Even older gen stuff is selling out. The R5 3600 is always sold out, and is now being sold as high as $220 through Amazon. 2060's are selling out, and some for over $350-$400. 1660 Supers going for $300. Thermal paste is even sold out xD. It's still a crazy bad time to be building a PC lol. I've never seen such a volatile industry before.