The front one is not a Western Star. It actually a model from Marmon Motor Company, a truck manufacturer that has been defunct since 1997. According to the Wikipedia article about them, Navistar, the owner of International Trucks, acquired property assets from Marmon Motor Company in 1997, so I guess you can kind of say that they became part of International Trucks even though operations were ceased and no trucks were made after that point.

That's an Oshkosh military truck, not a big specialist in those so can't say the model exactly.

I don't know why, but the Volvo VNL with the flatbed trailer down there on the Northbound lanes in this shot is really interesting to me.

@supersobes I totally recognize that Peterbilt 389 in Daleville! I'm from Virginia (just outside of Washington DC) and spent much time with grandparents who live in Fincastle, VA. I still can't believe that the huge truck stop right off of Highway 81 at the Roankoke Rd. exit is gone! When I was kid, we'd visit the truck stop- the truckers would let me take pictures of their rigs and sometimes look inside.
Shop Truck Illustrations by Lamar

I just checked the historical imagery on Google Earth (different from Google Maps), I see the truck stop you were talking about. That is a pretty big truck stop! Based on the Google Earth images, the truck stop closed sometime between 2011 and early 2015, and it was demolished by the end of 2015.

Google Maps Street View has some imagery of the truck stop taken in October 2012. And here's a good shot from I-81 North ramp, which also no longer exists, taken in May 2011.

Looking at the current images, I think I see why the truck stop is gone. It looks like VDOT bought it because the land it was built on is now the storm water reservoir for the new highway interchange.

This is the last image Google Earth has of the truck stop in operation, taken in October 2011.

To make up for that truck stop closing though, the Petro off exit 205 in Raphine (a little bit South of Staunton) has nearly tripled in size since 2011. From what I've heard, it's now the largest truck stop on the East coast. Here's what it looked like in October 2017. 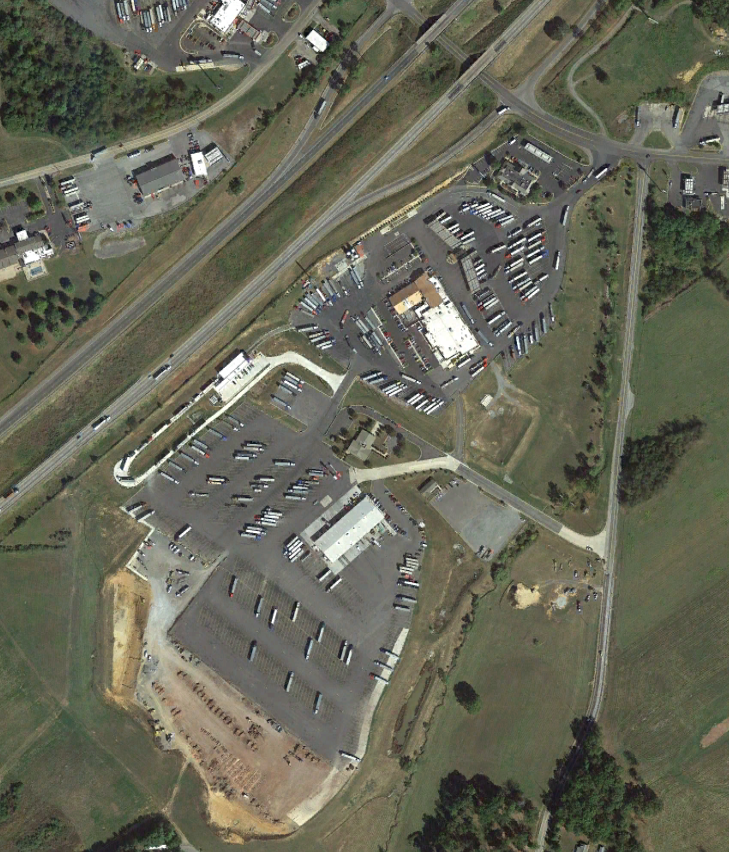 I had no idea that truck stop in Staunton had grown so much (I also haven't been back east for several years, so that would make sense). Staunton was always our mid-way stopping point before reaching Fairfax County. When I was younger, I was amazed at how many semis used Highway 81 (it's a major truck route, if I'm not mistaken?).
Shop Truck Illustrations by Lamar

@lamar326g Yep, I-81 is definitely a major trucking route. I would put it up there with I-80 and I-70 in terms of how much truck traffic that road sees. It's the perfect place for truck spotting! Interestingly enough, Staunton is also the half way stopping point for me when I head down South too. I always stop off exit 222 to take a break and grab something to eat.
Speaking of I-81, Google Maps has released some new street view imagery on that road since I last looked at it on there! Here are a few of the cool trucks they captured!