Tales of an Owner/Operator

That’s unfortunate but I can understand. Doing stories is very time consuming.

as ranaldo20 writes, it is not important to lose the joy..
Top

Cool! I’ll just grab a beer from the fridge.

Bringing this back, the ghost logistics thing didn't mesh well with me and kind of wanted to bring the original story quasi back. Need to say this feels right.

This story brings back Michael, but several years later. Having sold off the W900B and rented the garage in Albuquerque, Michael went out to clear his head and to find himself. Now he's back, and bought an older Peterbilt and a flatbed with what he has saved up. This time around he has learned from his mistakes.

Haven't been here for awhile, need to get things in order now that the rentee has left. Michael mutters to himself. I know, I have made numerous mistakes the last time I operated out of this garage. Hopefully the time away has helped me get myself in order. I'm aware of what the other truckers out there have said, but they were not in my shoes. Went through so much in a short period of time. If any of them had to go through that, I can imagine that they would go get away for awhile. It hurt selling the W900B, but I didn't want to have it sit here unused, so at the time I felt it was for the best to sell it. Still think it was for the best. Now the Peterbilt I have may not be new, it has 600,000 miles on it, but it has a new engine and transmission in it. The trailer came with the truck, the original owner took a bad fall the day after completing the truck and lost the use of his legs. Going to have to start back up small in order to get my stamina back for long trips. That should not take long. One thing I know is that I'm better off on my own.

Need to head to HMS Machinery to pick up a plow heading to the San SImon Sunshine Crops. 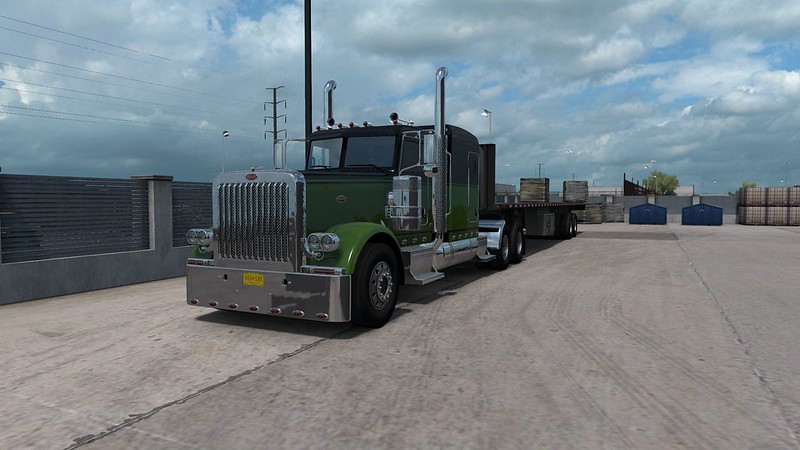 Traffic seems to be on the light side, can't go on this whole trip based on this short distance. As far as I know, it could be utter gridlock further down the road. Got to load the plows up to find out though. 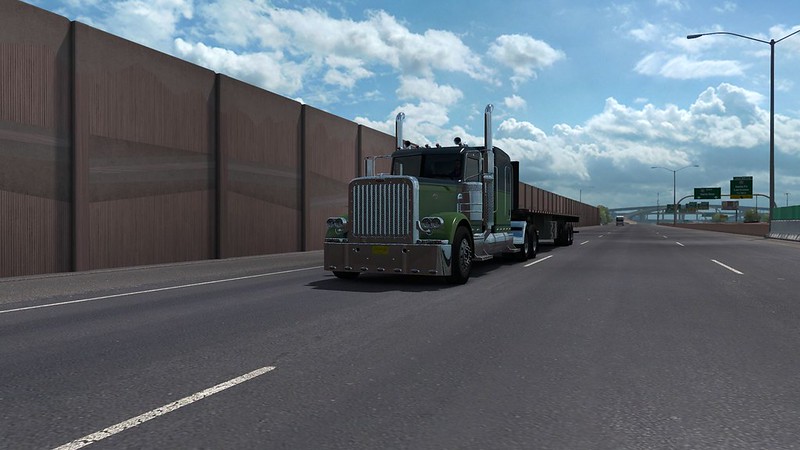 Ok, I'm now loaded up and need to collect the paper work before heading out. Head into the building to get the paperwork and first thing I hear is Oh god, it's you. Not the first thing that I wanted to hear, but then realized that it was Melissa, an ex girlfriend from when I was in high school. I said that it was great to see you, would love to talk but I need to get my paper work and get on my way. Maybe one decade, when I have down time we can catch up, which gets a resounding Don't count on it. Oh well, no real loss. While on my way back to the truck, I thought about what happened to cause the break up. I had wanted to keep the relationship going while she was away in California trying to get famous. It ended badly when my father had spotted her in Los Angeles with another man. Needless to say I was gutted when I was told, because she had promised to behave. The argument was ugly. Today was the first time I had seen her since the argument. Honestly I felt strangely satisfied when I saw that she was a secretary in Albuquerque. Guess Hollywood didn't treat her well. Yes, the argument/fallout from it was that bad and it seems time has not healed that wound. 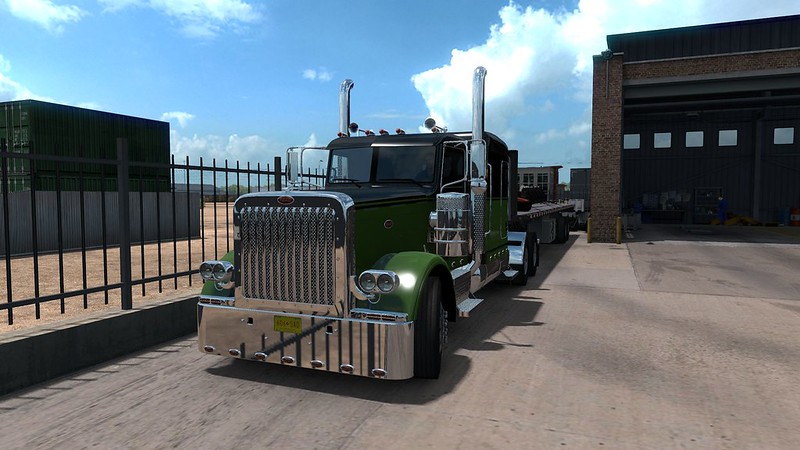 Finally made it onto the road and have moved on from the day's interaction. Focus is now on the road, as I need to cover ground as I'll be cutting it close. If all goes well, I won't have to rest until after I finish with the delivery. 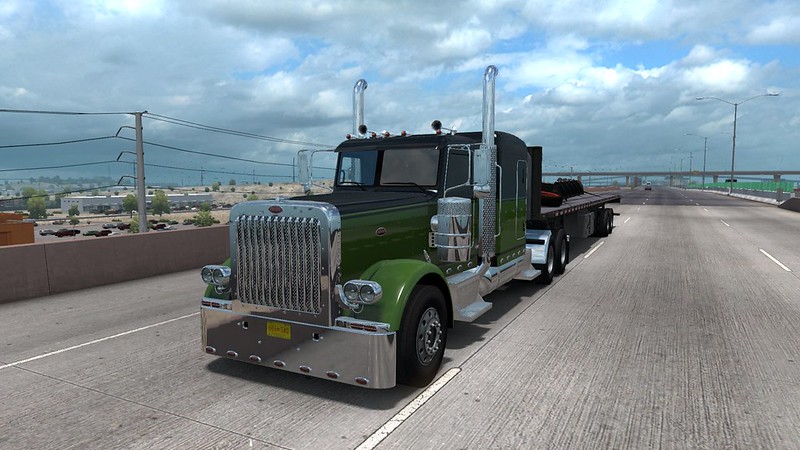 It's really startling how fast everything just falls off once out of city limits. I figured by now that this area would have been developed. It isn't though. 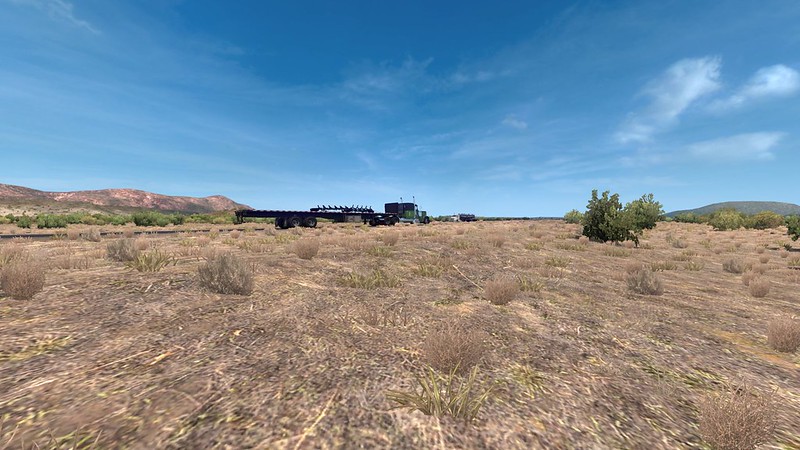 Just outside of San Simon and get called to go in and get weighed. While pulling out of the weigh station, I hear my phone chime. Seeing as I'm driving and close to my destination, it can wait. 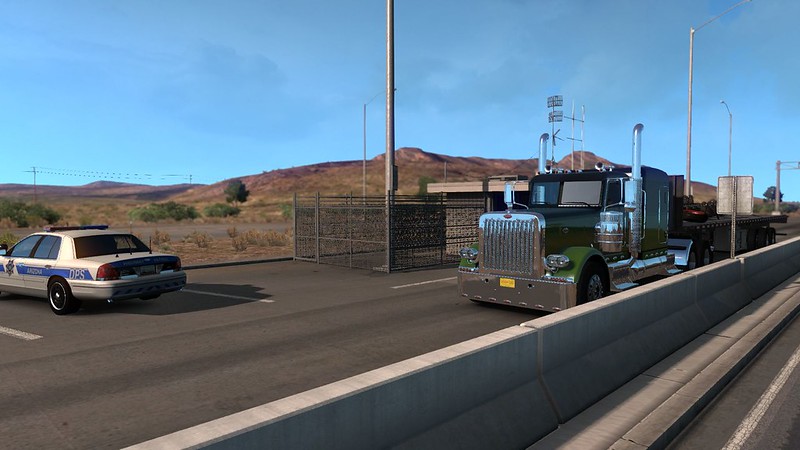 Arrive at Sunshine Crops in San Simon and hear the phone chime again. Again it's going to have to wait. Back the trailer to where they want the plows to be unloaded and go in and collect payment. 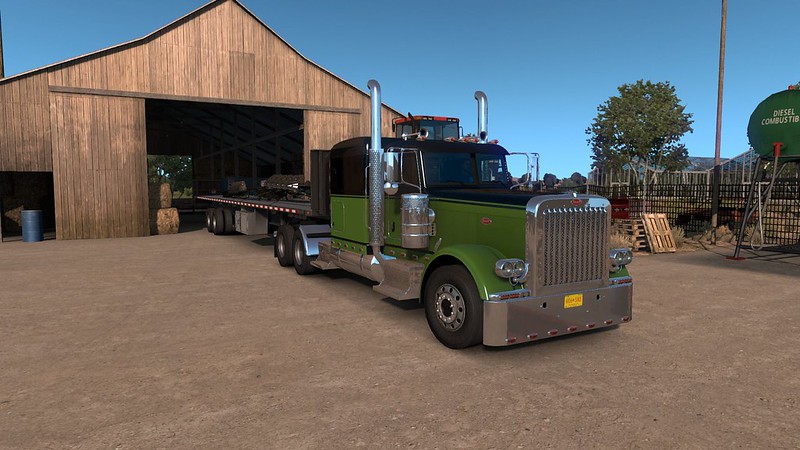 Make my way to the truckstop on the other side of San Simon. 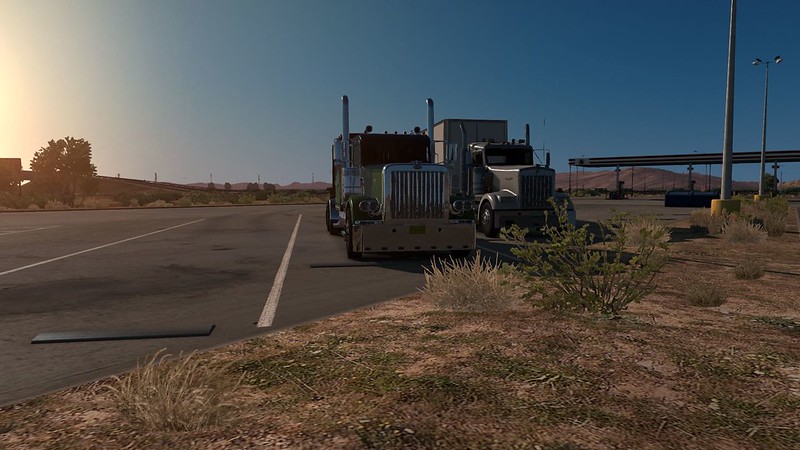 It would have normally been around this time that I would have called mom to check in, but seeing as her passing was the catalyst that made me go and find myself, that was not going to happen. So I pick up my phone figuring it was going to be a robo call. It was Melissa asking if we could talk. Hearing her on the voice mail kind of caught me off-guard. Debated for a moment whether I should or should not respond. My decision kind of surprised me, I decided to call her back. Hello Melissa, sorry I did not answer right away, was driving. What's up? Michael, seeing you today threw me for a loop and I acted inappropriately to you. I would like to mend things between the both of us, could we talk over lunch or dinner on a day that you are not on the road? Asks Melissa. I tell her, You know what, sure, I'll be home a in a couple of days, I'll meet you for supper the day I get home, pick a place and I'll be there. She responds Can do, talk to you then. I hang up the phone, and thought about what just happened, and figured if I get a second chance at driving a truck, maybe it's alright to give her a second chance, even if it means just having a person to talk to.
DK's Screenshots(5-26-2019)
Top

Awesome work. A legit STORY ya got brewing, I see. Looking forward to the next installment, friend!
(The Artist Formerly Known as Ranaldo20)
J. Ritter Transport- New Roleplay Series (Video)

I like the first person perspective. Looking forward to more.

This entry was supposed to be a couple of days ago, but I never would have completed as easily since I was dealing with some stomach bug.

I knew I should probably get home, had finished a run to Phoenix the previous day only because I was not able to get a load going back to Albuquerque. Plaster and Sons in Phoenix had a tank needing to go to Albuquerque, but it wasn't going to be ready until today so I drove there and spent the day there the kind folks at Plaster and Sons let me spend the night at the yard. The whole time waiting my mind was going a mile a minute, wondering what was going to happen, what was going to happen when I got back, and met Melissa for dinner. Everything happened quickly, and I'm just starting to make some sense of it. Guess that's what some downtime does to me, it makes my mind run wild. I had felt a little motion just as I had woken up earlier, went out to find that they had loaded the tank onto the truck and that all I needed was to get the paper work.

With papers in hand, I'm ready to head off, but notice that it's taking a bit longer than normal for the air to build up. 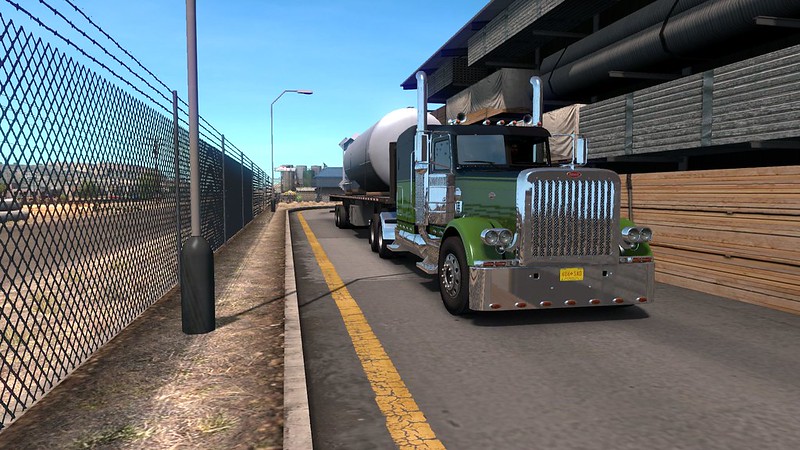 Eventually it did build up pressure and I was ready to roll. At this point, I figured that it was just an one off. Was good on fuel and I knew I was going to make it to Albequerque without stopping until I got to my destination. If it does that when I am ready to head back to the garage after making my delivery, I'll check to see what's up. But off to Albequerque now. 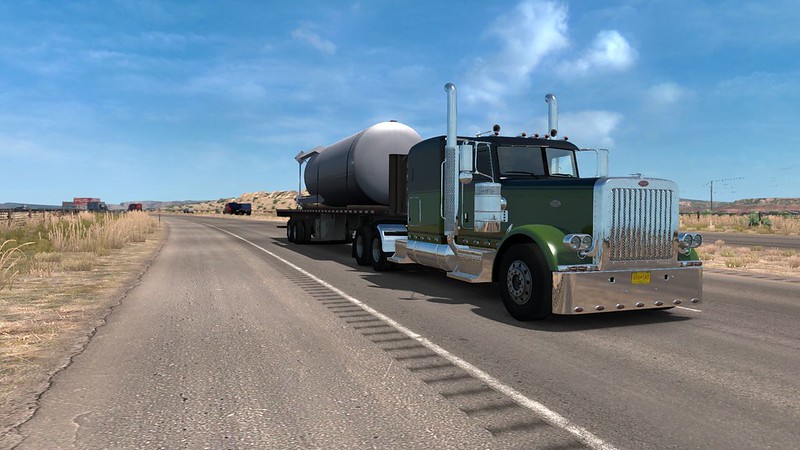 Been incredibly lucky with traffic lately and am quickly closing in on home. No issues at the moment, had to be a freak occurance. 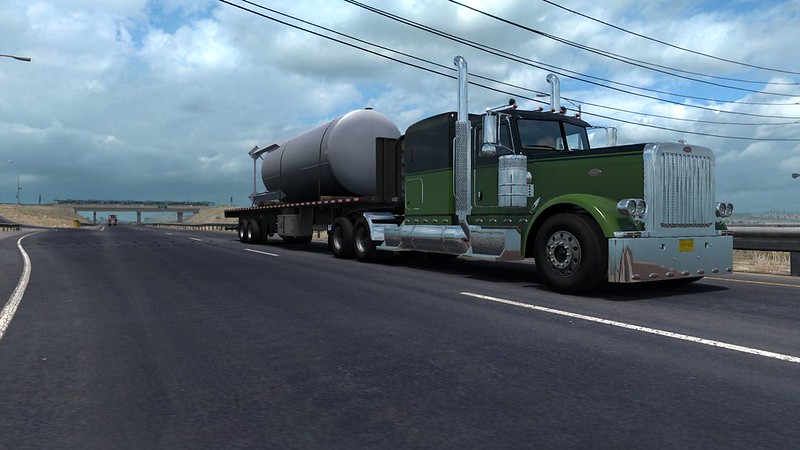 Not far to go now, luckily the detour ahead is not affecting me in any kind of ways so that's a positive. 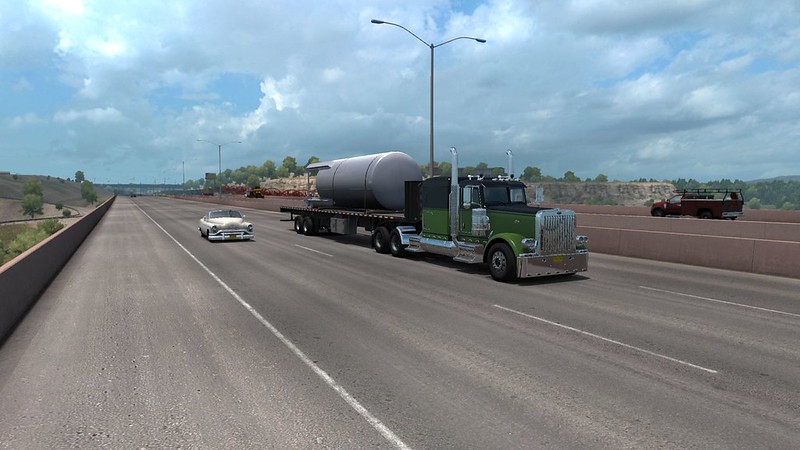 Arrived at my destination. 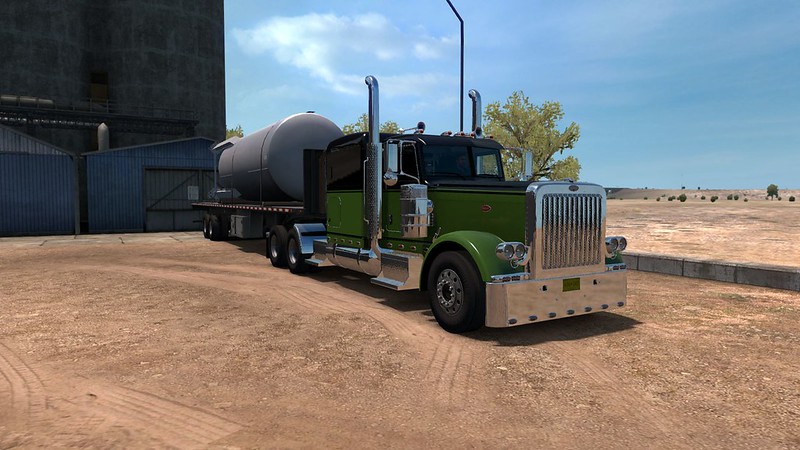 Now unloaded, I start the truck up and notice the low air light on. Look at the Gaige to see that it's struggling to build up air pressure. So, block the wheels and crawl under the truck to see what's going on and find a fitting went bad. Not a hard fix when at the garage, but here not so much. Seeing as I'm not far from my garage, I can probably get away with a temporary fix until I get back to the garage where the fitting and line can be replaced. Luckily I was able to get my hands on a piece of rubber hose and some hose clamps. It's not perfect, but it will get me back to the garage.
DK's Screenshots(5-26-2019)
Top

Ha, and here's me thinking the air leak will stop him in the middle of nowhere and he not be able to make it for dinner, air leaks NEVER get better on their own!
Thanks for the escape from reality.

DO NOT BUY FROM CSIO TECHNOLOGIES
They'll take your payment immediately and not fulfill order.