Forum rules
SCS as a company do not wish to have paid mods on this forum. While we understand that not all paid mods use the Intellectual Property of other companies/people, it is very hard to moderate what is and isn't acceptable when money is involved. There are also concerns that it could look unfavorable to potential work partners going forward if SCS allow mods that may potentially use unlicensed branding.
Posting in the Mods forum (ATS and ETS2) is restricted to sharing free-to-the-public mods and providing support for mods. For more details, please check chapters [4] and [5] of Forum Rules.
Post Reply
2990 posts

One thing I do remember happening a few versions ago was another thing with the editor whenever you clicked on a node to inspect its properties the editor would crash. Reported that one and they fixed it in the next beta patch for that particular open beta. Got a feeling they have done something again this time so yeah think I will wait a couple of patches and see. As I pointed out previously there was a patch while I was bringing 1.37 upto date for 1.38 OB yesterday. I did check the announcements section and there was nothing about the patch at the time.
These kinds of things only usually happen during these big changes, but you do need to try keep on top of things to ease the pain and suffering as well as grey hairs or loss of hair.

EDIT: Got it sorted thanks to @Reinhard. Turns out we currently have to rename the base folder to base_map to do the rebuild and/or save. The rebuild also gives a new file, in addition to the mdb and set files there is now an expa file in the map folder.
So now I just need to fix the skybox in blender then wait for any other changes SCS implement in this beta and compensate where neccesary.

@hawkbs I managed to make two versions of the game work for me with your input in the other thread, much appreciated. I had issues with my profile I guess some of the things when I was playing with before weren't compatible with the current version of the map so I just started another profile, no big deal. I found it odd though that I couldn't choose Fairbanks to for my new home, had to all the way up to Deadhorse to plant roots (?)
Anyway, thanks for your input and good luck with the map update.

@Trucker_71 Glad that helped you out there George. Was that in 1.37 or 1.38OB you couldnt choose Fairbanks?
BTW might want to edit your post in that thread to let folks know it worked for you.

Anyway just did a test and looks like things are going well now. Decided to pull into Maccas for a quick Double Quarterpounder and Cheese Meal.

Two things I have are theres an error message about Police I need to look at. The other is I spawned in midair somewhere so had to do a quick goto fairbanks in the console. This could have been due to my trying to load in previously
before I made all the correct changes (last ingame screenshot with the green and yellow messed up sky) and the game saved when I quit falling down somewhere under the world.
At least I know know that we can still keep our savegames and continue onwards and if people do find themselves floating /falling when 1.38 comes out of Open Beta then a quick console command is all thats needed.
Also need to fix the delivery area at the Brewery in Fox as I just did a run up there for testing and noticed theres an issue there thats not been mentioned before.

EDIT Previous Savegames still work as I just loaded up an older save than mentioned before so folks wont have to start another profile.

Edit 2: Had a look in Blender at the skybox, sadly Im going to have to wait until Conversion Tools is updated to 1.38 which probably wont happen until its out of Open Beta as it wont import correctly using the 1.37 Conversion Tools.

LOL Bettles trail looks pretty bumpy now! From Fairbanks till turn to Bettles I got 2% truck damage(I guess just tire wear), in the Bettles trail in a half way I already have about 20% damage not driving more than 25-35mph....

The biggest stupidities are done with serious faces.
Top

Lol yup thats pretty much how the Bettles trail is. Generally mainly tire wear or shocks id say.
If you want to see what it was really like go back and watch some old IRT episodes where Alex or Hugh (cant recall which) went to Bettles. Extremely bumpy ride for em. Dont think any of the drivers
in the show went above 25 apart from probably Hugh.

On another note I have zero errors showing now and only the skybox to fix by the looks of things, which is just redoing the UV Mapping. Still need to devcam all the way around the map though.

It was in my new profile in 1.37. When I first started the mod it went a bit glitchy for a second and then settled down and Fairbanks wasn't available as the home base. I'm going to get into it later and delete the profile and try again. Thanks for everything!

Ahhh but Alex did a couple of trips as well if i recall.

With a re-install and a new profile in 1.37, I was still unable to choose Fairbanks as my home garage. Oh well, it's working well though.

@hawkbs LOL I figured out how to drive Bettles without damage or with minimal damage!

There is a trick. But I wont tell you cause you will "fix" it then! 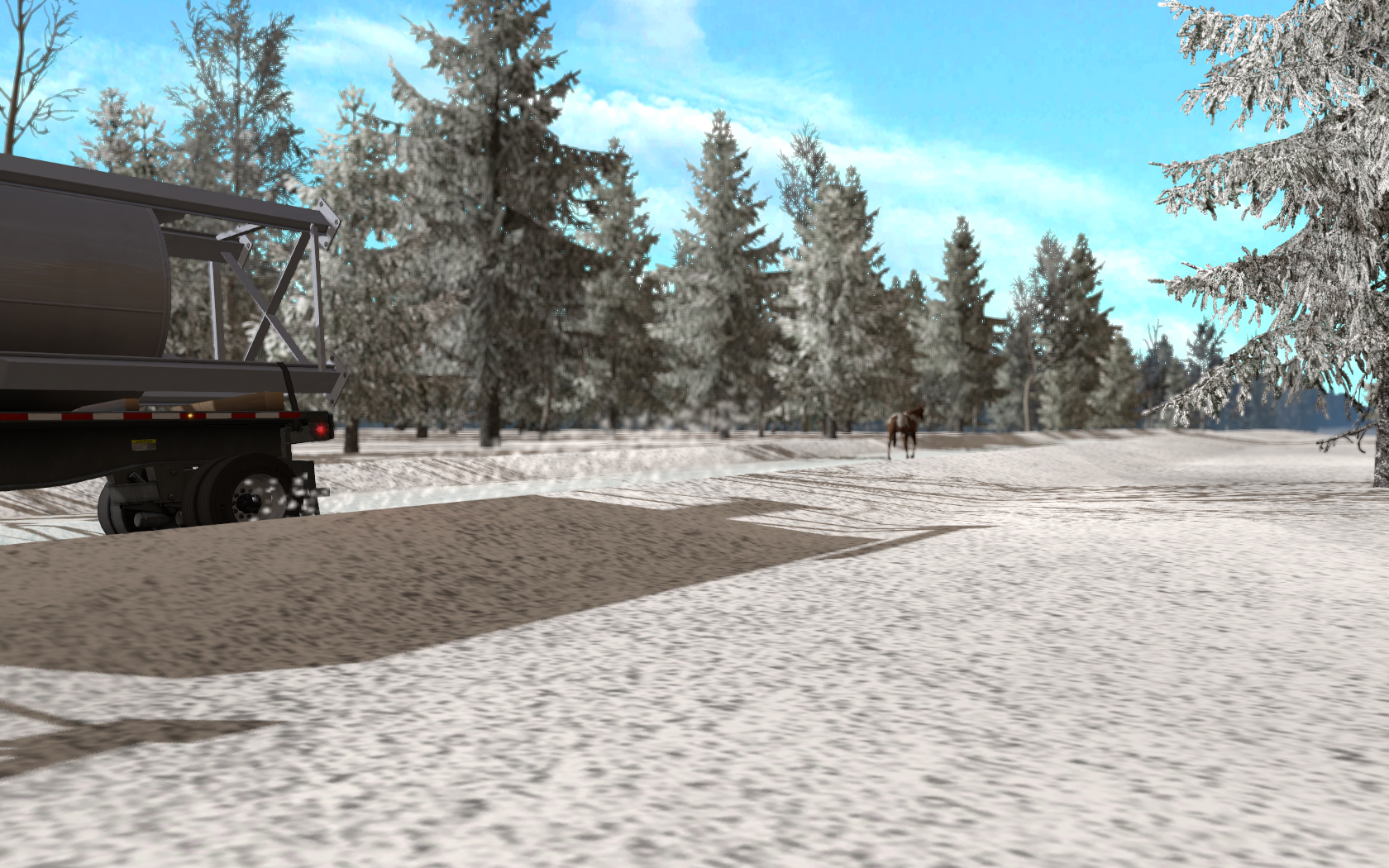