ACC does have a "follow the speed limit" feature which works in both ATS and ETS2. It requires use of the plugin that comes in the ACC package. Installing the plugin is described in the ACC documentation. You must install the plugin in your game's install directory. Assuming your game is in the default install location this is where to copy the "ACC_Plugin.dll" file:

If the "plugins" folder does not already exist there then you should create the folder.

When the plugin is installed correctly then the "(inactive)" text (by the yellow arrow in the image below) will disappear when you start your game, indicating that the plugin is active. (Note: the game will pop-up a new message about using advanced SDK features, this is a result of the plugin being loaded.) If ACC still reports "(inactive)" after you have started your game (and agreed to the SDK warning) then the plugin did not load. The two buttons by the blue arrows in the image below will let you set the keybindings for the two speed-limit functions: the one on the left is for ACC to set the cruise control to the current speed limit (once), while the one on the right is for ACC to force the cruise control to follow the speed limit as it changes. 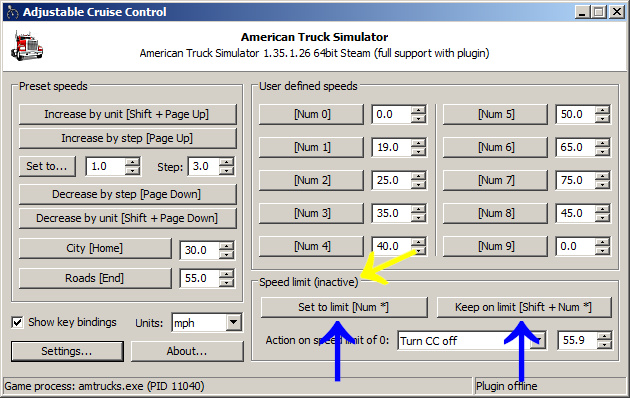 thank you so much Josh0!!!! this is what i needed!!! i had the plugin in the wrong location (had it in the x86 folder instead of the x64 folder)
Top

Thank you for the regular updates. But there seems to be a problem with the latest ATS 1.36.1.0s file. Its not activating at all.
Top

@Kralore, can you be more specific? Can you apply the update file to ACC? Does ACC recognize that your game is running? Does pressing one of the ACC keys activate the cruise control in the truck?
Top

Sorry for not providing a bit more info. Your new update is working. It would seem SCS did an extra game update today with the release of Utah that messed up ACC lol.
Top

Yes, it seems that SCS distributed two ATS updates today, both show version "1.36.1.0" in the game but the executable files are different (which is why ACC didn't recognize the game executable from the second update).
Top

Hello, I am looking for an installer, I care a lot about this.
I play the keyboard and I can't live without it ... Please
Top

Will there be an update to this mod ???