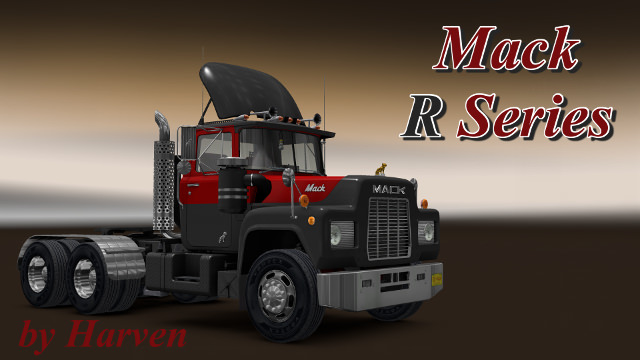 I'm pleased to present to you the mod I've been working on for over two years. But don't be affraid or discouraged, it doesn't take that long to make a truck mod

. I've been working on many other projects in the meantime. To the point: It's finally here - the Mack R series truck. The model dimensions are based on specs from late 70, so are engines and transmissions, therefore don't expect high performance from this oldie. She will pull but you have to be patience and work together with her

. At the end of the job you will feel the joy of accomplishment! (if you manage to get in time

Since this is the premiere of the mod there is a moderate amount of parts to customize. I plan on adding much more with future updates but please be patience, this is not the only mod I'm working on/maintaining. The mod name is Mack R (and not R600) because in the future I will add R700 hood and parts. I will not reveal all planed features yet so that if for some reason I will be unable to add given feature you will not be disappointed

. Instead I can list things I will not add for sure: 1000+hp engines, modern engines, modern transmissions, more than tri-axle chassis, UK cab variant, lowered chassis, "chipped" engines... you can see where it's going. I want to keep this truck true to real life original.

Features: The truck is available at Kenworth dealers.

About Maxitorque trnsmissions:
I don't know of a shifter that will let you use some transmissions like they are supposed to be used (like TRTXL 1070 with 12 speed forward and 5 reverse). Please let me know if you came up with a custom shifter layout that is not very tricky to use.

Some answers to common questions (sadly mostly negative it seems

A short story about the mod and it's origins:
Long time ago good friend of mine, Pauly, got hit by lightning and bitten by a cobra and suffered short time blindness in result. In this state he went to a 3d model shop and bought a truck model which supposed to look like a Mack R. The shopkeeper wasn't very honest with him and Pauly believed the model was of high quality. Back at home Pauly watched the model on his Braille screen and showed it to Lucasi (another good friend of mine). But since Lucasi was unable to read Braille they both agreed that the model should be fine based on it's price. Unfortunately Pauly and Lucasi were not very good modders at that time so they didn't know what to do with the model. They called a modder for hire who would put the truck into the game. He took his payment and did the job. But what can you expect from hired modders? He packed his bags and left to Tiber to become a meditating mummified monk. Even with short time blindeness Pauly wasn't truly amazed with the result and Lucasi agreed. Since they couldn't find any modder for hire (only mummified ones), they went to a hot tub to relax and plot intrigue. They decited they should hunt a naive, susceptible to suggestions, unexperienced but promising modder with nice body and long hair. On the hunt they found a good looking FLB truck, but after poking it with thier bone spears, they discovered no one was inside, so they carved a message on a stone tablet. Next morning a modder (that would be me) came to check how his truck is doing. He found lots of messages but one peculiar drew his attention - you guess it right, the stone tablet one. Few days later the three met and discussed about the Mack R model. Pauly and Lucasi were dissapointed with the modder's appearance, he didn't have nice body nor long hair. He was no match to their beauty. But was he naive, oh he was. Pauly and Lucasi told him that the mod is basically ready just needs few adjustments and fixes. Can't blame them, Pauly suffering short time blindness and Lucasi who couldn't read Braille. The modder started his work. The more he looked at real Mack R pictures the better he understood what kind of swamp he got into. But our brave modder saw the beauty of the Mack R truck and was blessed by the almighty Bullgod... Bulldog himself. With the blessing the modder received a nice body and long hair so that he could finally stand proudly in Pauly and Lucasi presence. Cheered by Archangel Rubber Duck the modder continued his work: he used his blessed Golden Blender to remodel the truck and to create most of the parts anew. He worked even on the 7th day. Many years later came a day when the almighty Bullgod decided that the mod is ready to be released. On that day Pauly and Lucasi were finally truly amazed so they went to the hot tub to relax. Bubbles didn't stop even after the hot tub went out of power, that's how happy the two were. The End. You don't believe me? Check the screenshots of the original model here: https://www.gtaall.com/gta-san-andreas/ ... -1970.html (it's the same model this one is based on). Pauly bought it - for real! Silly Pauly

On the other hand you can use the truck now because of his silly decision to buy this abomination.

About RTA commitment:
The mod uses parts from RTA's Mack Superliner interior - namely: interior upholstery and interior cab body models. The rest of the interior is made from scratch, this includes: dashboard, all gauges, switches and knobs, labels, steering wheel with column and attached sticks, gear shifter, heater and seats, roof vent hatch, floor mats and pedals. All animations are also made from scratch. Not a single texture from the Superliner is used. I greatly reduced the number of triangles in the interior upholstery and interior cab body models.

Please don't reupload to other sites. Modify it only for personal use. Thanks! If you see this mod on any other site than steam workshop or my google drive please don't download and report if possible.
Last edited by Harven on 25 Jan 2019 20:16, edited 7 times in total.

WOW! Thank you so much for your work!
I can hardly wait to drive this truck tomorrow.

Thank you Harvey, Pauly, Lucasi and rest of the team. I've been patiently waiting for this one
Top

Omg, this is wonderful. I see these on the road frequently. Thank you very much.

The quality of the mod is absurd! It's great to see old models in the game and still at this level of realism, but I have a question about project development ... Are you planning to bring the 4x2 chassis? I think it is not something common but I saw in an advertisement a version of 1985 that has this configuration but otherwise the mod is very well done and thank you for releasing the use for the community

Fantastic! Here I am, getting back into the truck sims, and am greeted by this! Thank you.
ProMods moderator, translator, and tester. ATS and ETS2 player and modder. Author e.g. of the Profile Jumpstart mods. Fennoswede from the Finnish archipelago.
Top 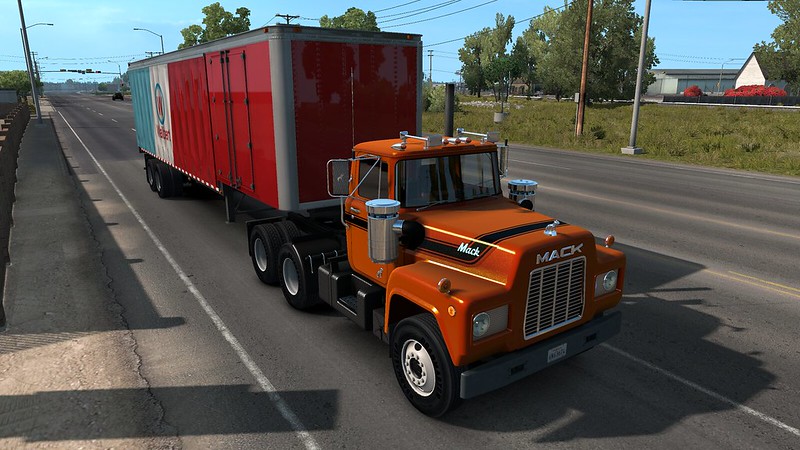 Mack R Series by Harven by Vissers Group, on Flickr

But I do have a question - I tried to attach lights to the bumper, as you can see (no other mods in profile, this is my testing profile) and they do not show - it's as if they are behind the bumper. Note that this is not consistent behaviour with all the bumpers, some show some lights, some none at all. Am I doing something wrong?

WOW! Unexpected. Thanks Harven!
(The Artist Formerly Known as Ranaldo20)
Other Tales- NEW! July 5th -TJ Doing What He Does

OMG my favorite truck in USA! thx wil use when have ATS

About Maxitorque trnsmissions:
I don't know of a shifter that will let you use some transmissions like they are supposed to be used (like TRTXL 1070 with 12 speed forward and 5 reverse). Please let me know if you came up with a custom shifter layout that is not very tricky to use.

while current Mack transmission like the current models 13 and the 18 act like their eaton counterparts, the old 12 speed actually have a four-position splitter, with positions High(or Overdrive), Direct (as going straight, no through a gear), Neutral (yes, you can actually select a neutral position on the splitter) and Reverse (Yes, you actually have to select reverse through the splitter) and a second shifter for what they call the "Front Compound"(basically, front splitter box) that have "high"(direct drive) and "Lo"(underdrive) positions

Which means that you had 2 crawler (1st, both splitter, on the low position for the range), 10 forward gear (5 gear + splits), and 5 reverses(because the reverse gear is in the rear splitter box)

AFAIK, the game does not support using twin stick(although it would be probably possible to do something, as per the pattern it's only position of the crawler stick if you exclude the neutral), nor does it support a 4-position splitter switch, so you guy will have to guess something

Page from a brochure somewhere on the net : 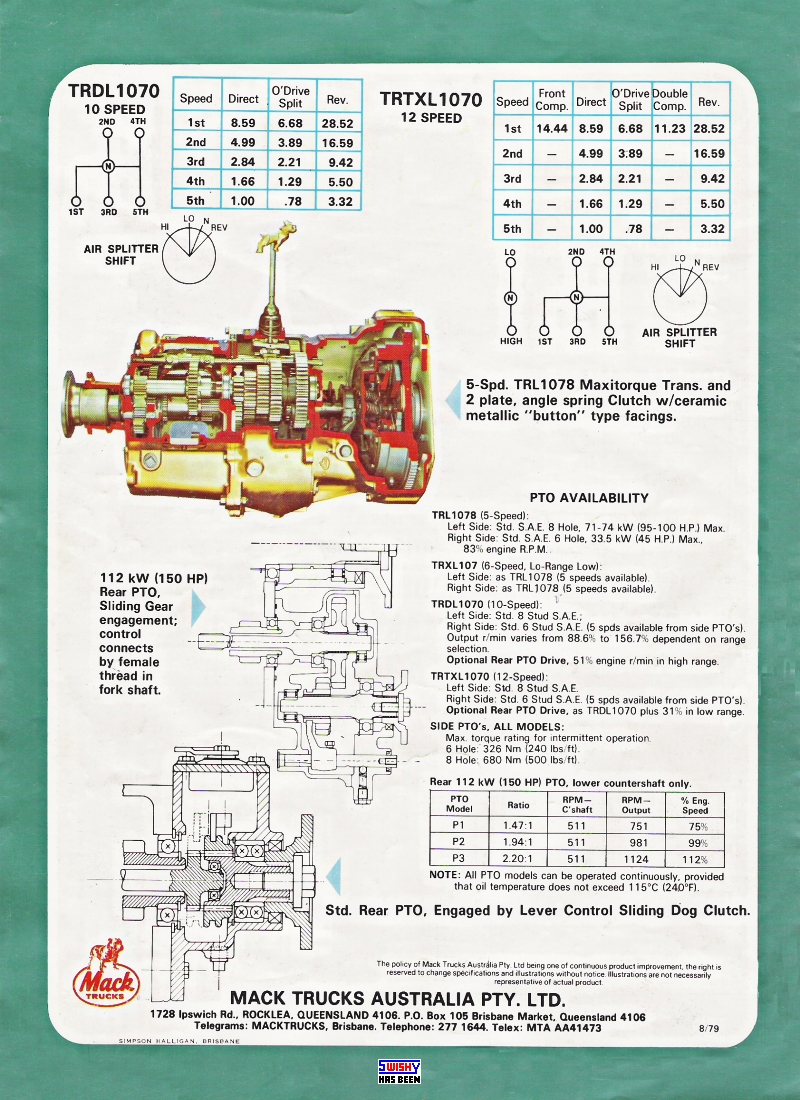