This should not and will not alter any ongoing sound mods and related mods at any level that are on progress by other sound modders.

The Community has great sound modders of taste, and there is always a choice of the respective user of the community mods. Shall a taste of such sound mod be a kind of yours, you may endeavor to continue your read and assessment of this post but rather shall not make the post a place to backfire with any sort of unusable comment.

Although recorded from REAL TRUCKS, It is audible that the current SCS Truck Sounds on the new release of the new FMOD sound engine for the game have a some what unprecedented lack of quality that have arisen due to the ongoing implementation of the new sound engine. Noting the improvement progress of SCS making on its own.

Nevertheless, RastaJr Productions as a sound modder with a defined taste of own has made changes to all the truck sounds as preferred as possible and as tasteful as one simply can design.

The Following work that includes a rework of, most for now but all for the future, sound of the current SCS in-game trucks of ETS2 has been implemented in a way to improve some of the mishaps of the overall truck sounds.

Exception to the EVR Sound Mod of the DAF XF105. I cant break logic to use a XF106 PACCAR sound to the XF105 when there simply is a free mod out there. If in Violation, the Author can simply ask and things shall be sorted out.

-Completely re-designed, re-structured, and re-sampled all the sounds of SCS.
-Using the whole sound library that SCS ever released in the base game file, a New MIX of sounds according to the recorded samples by SCS and respective engines.
-The Interchanging of sounds in the game has now been accurately re-defined.
-With a New Formula to mix all sounds (transitions that reach 200-400rpm per sample based on dependency) is used in mixing the sound. This has resulted in a success up to 90% of Sound Smoothness, when ever revving the engines or when ever the revs fallback.
-Carefully taken care of Horn Sounds that resemble the magnificent Hadley and FIAMM Horns of European Trucks.
-On the Basis that SCS has made a GREAT Improvement in the Miscellaneous Interior Stick Sounds, a unique Low Air Pressure Sound for every truck along with wiper sounds was only added to each sound improvement. Stick sounds that play for blinker sticks and so on were recorded uniquely for every truck as new by SCS and independently added for every truck. As a result, a decision not to replace such sound samples.
- And many more improvements made.


BIG THANKS TO THE AUTHORS

I Just took care of the combination.

1. Always load any of these sounds on top of your mod list. The sound mods are compatible with mainstream sound mods such as Sound Fixes Pack, and any AI Traffic Sound mods along with sound mods created to change UI sounds (clicks and buttons) and MENU music.

Any truck sound mod from this sound pack will have a new look for the default engine so as to stand out from other sound mods and make choosing easier. As explained earlier which you can load all 15 sound mods at once if you wish to, but considering that they should be always on top of the mod list, here is what every sound mods thumbnail in mod manager looks like to differentiate them from many of your other mods. 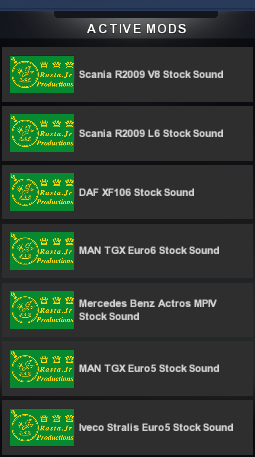 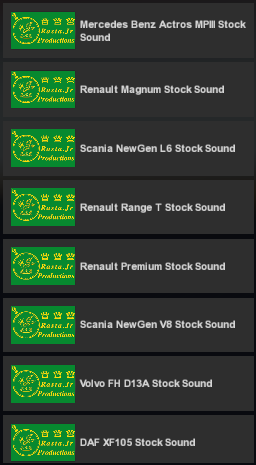 2. Details of the Sound Mod about compatability are on top of the videos and individual links for each truck sound mod are below the representative videos.
3. Compatibility of mod trucks are listed to on the details part of each sound mod. More compatibility will be added to any mod truck upon request.

An ALL IN ONE version of the megapack which consists of a packed single file with all the sound mods included will be added on another update. but for now you can load all of the 15 sound mods together at once without any issues.

That mod is really amazing,I already needed a new sound for man euro 5 because it reused sounds from the old MP3.Horns are really amazing.
FMOD sound modder and currently learning to make my own 3D models,yet i'm fine at porting PTTM/Haulin mods into ATS/ETS2 with fixes.I do not take requests on new trucks,it will be a waste of time.
Top

Awesome job mate ! I really like the V8 sound for R and 4 series

It means dont load two sound mods or more in the game. The game seems to read the only sound mod which is on top of the mod list and overwrites other sound mod with it. I have tried to make this possible by rigorious testing and tricks but it seems to not work.

Would it be possible to make one big pack, to have em all at once?
Top

This sound is addons on the iveco stralis of alexey?
Top
Post Reply
67 posts

Users browsing this forum: No registered users and 12 guests