I had the same problem as you with two of my sound mods : I was unable to use them together, the same sound was played for the two trucks.
I don't know if you make your sound mods like me but here is where my problem came from : I used the same project for the two mods (I just copy one project to have the second). Even if I created a new bank, I used the same events in FMOD studio. And since it was somehow the same events for two projects, there may be some kind of conflict between them in game thats why there was only one sound played. To fix it, I just duplicated the events of one project in order to generate new events with the same sheets, sounds, setting, ... and the I deleted the old events. Now I can load my two mods together in game without any issues.

I hope it can help you because your mods are very nice but it's a bit annoying not to be able to use them all at once.

I WAS JUST ON MY WAY TO RELEASE VERSION 2 Of the MEGAPACK with added all SCS Renault and Volvo truck sounds AND I SAW THIS REPLY!

I am not mad(just incase of the CAPS) but thankful sir. I checked out by creating two different sound templates from the given SCS template from scratch for both of them and i just exported the GUIDs and now i finally saw the difference in "reference" of the Events and Parameters in the GUIDs file, which are the two keys for sound creation.

Now i just have to port them to a newly created independent template for each of the 15 sounds. Its just some hours of careful work and i dont need to reassign each conditions and properties of the sound files as i can simply copy them.


WELL, For all of the humbled community who follows this, the updates are ready for 1.38+ and they will roll out after this quick fix thanks for the above distiguished member comments on the hot fix that will make the sounds load 2 and more at a time. 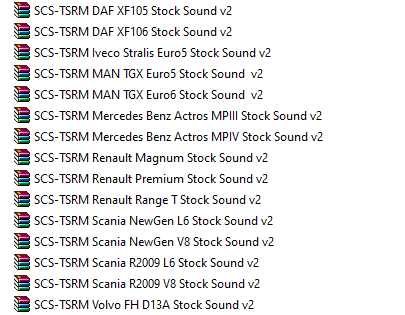 Eagerly waiting for the new sounds!

Does this mean that they will all come in just one big nice download too? anyhow, just found Your mod and have fallen in love with it, especially, the new gen Scania L6 sound..it's gives me goosebumps!!! can't wait to play with the 2.0 sounds!!
Top

@R.J Productions yes indeed, this is the key to have multiple sounds working together. do not duplicate an existent project with sounds, but start always a new one based on the scs template. you can always copy entire events from other projects but not banks.
to simplify your work even more, you can always create more banks within the same project but just don't duplicate banks, create new bank every time you need, then duplicate the event and reassign it to the new bank. last you edit the event by replacing the sounds. as for you would be more complicated having much more sound than for a traffic sound events like me, one very useful trick to replace sounds in events is this below. you simply click the sound you want to replace from your event which will appear in the master track on the bottom. then from the assets you drag the sound you wish into the master track. this will preserve all existent settings of that sound. 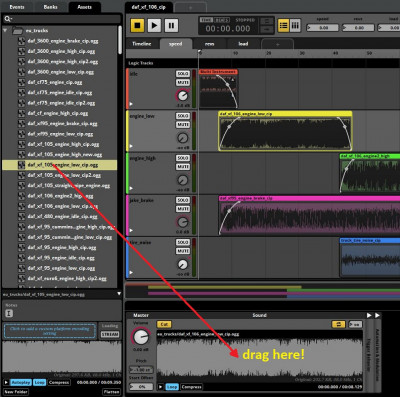 Thank you Cip. Although it took some time, Ive learned my lesson and finally the version 2 of the mega pack is out.

For all the followers of this megapack sound mod, the thread has been updated with new information. Get your new links.

And as always feel free to comment and interact.
Sound Modder

It seems to actually conflict with Eugene's PGRS mod. They each work on their own for me, but if they're both enabled, the game crashes.
Top

So this is Christmas.... well too bloody hot to be christmas, but You releasing a so great sounding mod and for every scs truck! then christmas must be here early this year!! Love the sounds, love the fact that i now can buy and try another truck without first going online looking for a sound mod... really can't describe how great of a mod this is!! thank You so much for what You have done!! now back to my Volvo, heading for St Petersburg

I understand some of the conflicts. @Stabssy

the next update comes with major fixes and more sound additions like the original Scania DC12 L6 Sound mod by SCS (Scania truck driving simulator and early ETS2), Renault T480 engine sound, and more and more indepth fixes as some good samples were found in the 1.38 release (i dont just use sounds from previous 1.36 versions i snoop and compile most ets2 major releases). so accordingly i hope to fix these minor conflicts of mod trucks like the one in eugene in the next update.

Meanwhile you can follow other updates and progress of other independent sounds too. (https://www.facebook.com/JRastaINC) you know, there is a Scania 3 Series V8 Stock engine sound thats awaits a good updated truck for release. maybe you can check it in the videos tab.
Sound Modder

Sounds good for me but i've got a question for you :
Can you add a compatibility with Drivetrains mod from Galimim ? because sounds i have i need to put them above the drivetrain and i lost some engines from his mod (FH4 sound by Kriechbaum currently i lost all e6 engines not EEV).
Thanks by advance
Last edited by Shark76 on 17 Aug 2020 12:32, edited 1 time in total.
Power is nothing without control
follow me on Instagram: https://www.instagram.com/shield.2310/
Top
Post Reply
82 posts