Thank you for update!

I just downloaded this mod and do I enable american truck simulator under mod manager?
Top

I have a question: how do i remove that idiotic yawn sound, or maybe how to replace it with something else? Thank you. Base.scs
\sound\ui\
To remove that yawning you might wanna try editing ui.bank.guids and/or ui_yawn_man.soundref and/or ui_yawn_woman.soundref and put those files into a new mod. But as I haven't tested it, there is a chance that this will not work, or that it will lead to a crash.
...also ETS2 v1.38 versions available of ALL of these mods.
Top

I edited, replace it, even deleted but the dude is still there. Persistent MF.

hi, in the current version (20.42) where can I find the folder def/vehicles/ai?
There were files like a3.sii and I used to modifiy speeds, especially for slower (annoying) trucks. Also I changed certain spawn rates i.e. for vans like the Ducato because I personally think they do not spawn often enough and often they are also not as fast as they are in real life.
Because who doesnt know the white Sprinter or Ducato 20cm behind your rear bumper?

thank you for your help
Top

Something awesome to announce for the next update coming later today.

Can't wait to share it with you! I'll respond to all the new questions when the update is out. Thank you

Heck ya!! The best and most immersive mod
Top

Well everyone I finally did it!!

The fuel station sounds for getting back in the truck are finally converted!
This would've been done sooner if the SCS FMOD documentation were complete and available for us modders - I had to figure it out blindly.
With FMOD, you will see some improvements in the implementation.
There is a caveat though. The volume for the fuel station sounds will now be controlled by the game sounds volume slider.
This change had to be done to preserve the original experience of the sounds.
Otherwise the sounds would be affected by an unrealistic reverb and you wouldn't hear the seat belt click sound etc. when you have the windows closed in the interior view.
I've also made the sound a tad shorter by skipping the walking on the steps. If you prefer the longer sound let me know but I think most like the sound short.

Additionally, the driver alert support sounds are back. I decided to switch the alert sound in ATS to a Freightliner variant. It's a higher quality sound and a little less annoying, I believe.
Of course, you are able to disable this with the Disable Driver Alert Support sound addons on the Steam Workshop and the addon available in ShareMods.

This brings the current tire sound progress to the following: 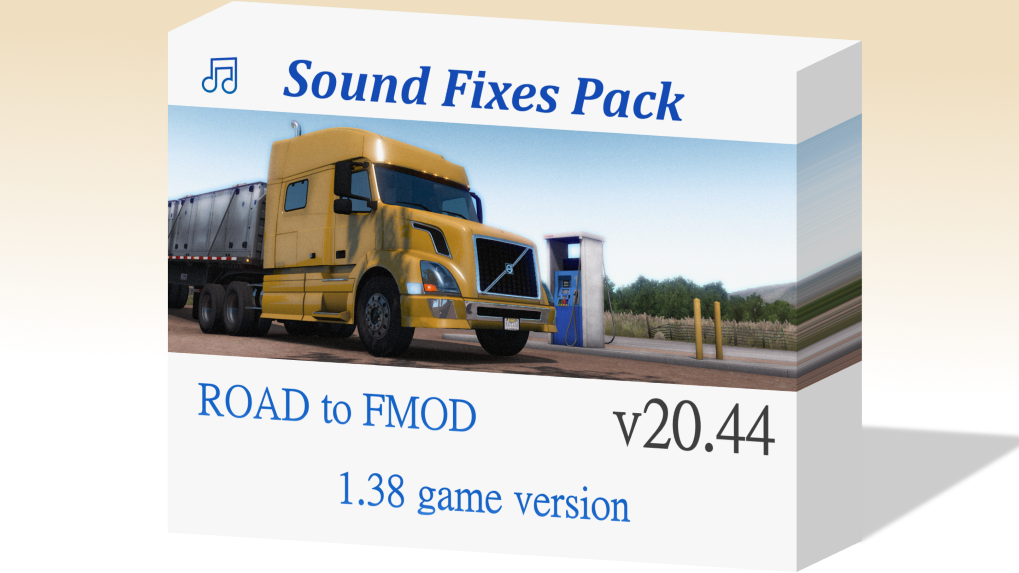 Pack updated to 20.44 with the following changes:

@tajana_g - It's still in def/vehicle/ai but Sound Fixes Pack currently does not modify a lot of the AI traffic sounds individually per vehicle. Eventually the mod will get all those unique sounds covered for every vehicle.

@Jia151 - You can enable the mod in the Mod Manager. For American Truck Simulator you use the ATS version of the mod.