Irish Emergency Services
Notes on the emergency services of Northern Ireland I've compiled in these two posts in the UK research thread.

Police (Garda Síochána)
Omicron has already given a recommendation here:

I'd personally say a Hyundai is probably the most representative pick, as Hyundai is unusually popular in Ireland. Here's an image of what the rear of a traffic corps patrol car looks like.

In Dublin, ambulance services are partially operated by the Dublin Fire Brigade. Their ambulances have a different livery to match. (Front, Side, Rear, Irish language livery).


I'm not too confident about giving examples of police/paramedic/firefighter uniforms.
Top

Just to add to what the previous posts have said about Irish police (Garda) cars;

Most common by far would be the Hyundai i40 as previously mentioned.

However, Garda cars are updated every 3 years I believe, and the recent most common vehicle is the Hyundai Tucson https://images.app.goo.gl/ZZwJ23rmcMe6y4W1A. This is slowly replacing the outgoing i40 patrol cars.

Secondarily, there’s the Hyundai i30 (very common, though less so than the i40), the Ford Mondeo, Ford Focus (estate only), Opel Insignia (estate only), the Ford Ranger, the Ford Transit Van (an important one but not a general patrol vehicle) and the Mitsubishi Pajero.

The gardaí have an armed response unit which can often be seen in the Audi Q7, BMW 5 series, and BMW x5. Most common one i’ve seen is the Q7.

As far as unmarked cars, unlikely to matter in this context, the Hyundai i40/i30 and Ford Mondeo are the only suspects regularly seen.

My picks for the ones that should be used would be the Hyundai i40, Hyundai Tucson, and maybe the armed response Q7 as a little extra. The Ford Transit would also make a good prop for the random events.
Top

Road signs (detailed)
Font: Transport Heavy for both Irish and English. English text is in capital letters, while Irish is in lowercase italic letters. Special characters are used for capital and lowercase a, n and m. A dotless i can be seen on older signs.
Colour: Blue for motorway signs with white text (including services located ON the motorway), green for national roads with white text and white for local and regional roads with black text. Brown signs with white text indicate "tourist and leisure destinations", services located OFF motorways, river names and county boundaries.
Route numbers: See Other points > Route numbers: viewtopic.php?f=249&t=267669&start=10 (very very minor and unusual detail)
Warning signs: Are diamond-shaped, black on a yellow/amber background.
Regulatory signs: Are divided into restrictive (circular, black on a white background with a red border), prohibitory (same as restrictive, with a diagonal red line) and mandatory (circular, white on a blue background). The STOP and YIELD signs, as well as bus lane signs, also come under regulatory signs.

Several signs' design are very inconsistent, such as the No left turn/No right turn signs, Pedestrian crossing (e.g. 1 and 2), No overtaking (where the shape of the cars vary e.g. 1 and 2) and speed limits (which should only look like these).

Traffic signs manual: A list of PDFs can be found on the Irish government website. Each PDF goes into a lot of detail regarding the specified traffic signs, as well as road markings and location of traffic signs.

This Wikipedia article on Irish road signs also goes into detail (though not nearly as much). The Italian language article opted for a different layout, and shows a few more signs not displayed on the English language article. It also gives some details for each sign.

As well as varying pedestrian crossing signs, Belisha beacons (yellow flashing lights located next to them) also vary. It would be a nice detail to add these to pedestrian crossings.
Last edited by Omicron13 on 21 Jan 2021 14:22, edited 3 times in total.

There are two rail companies in Ireland. Iarnród Éireann (Irish Rail) operates in the Republic of Ireland, while NI Railways operates in Northern Ireland. Both companies jointly operate the Enterprise, a train which runs between Belfast and Dublin. Around the border, the Belfast-Dublin line follows the M1/N1/A1 road relatively closely, and the Enterprise should be visible on this line.
In the Republic:
M1 crossing, north of Dundalk
In Northern Ireland:
A1 crossing
Newry's southern A1 junction
Newry's "Egyptian Arch"

Other noteworthy places:
On Wexford's waterfront, the rail line runs along it on a single track with barely any separation from the road.
In Cork, the railway runs parallel to the N8 for much of that road's eastern approach, including separating that road and Cork's container port.

Also of note is Dublin's DART system, a commuter railway that functions as a metro-style service. Except for maybe here, there isn't really a spot where it runs close to major roads or industrial areas unfortunately.
Top

Motorways & National Roads
Obviously not all of these will fit, these are just the roads that lead to the places I've listed above.
M50 - Dublin ring road; include Dublin Port Tunnel & M50 Tolls (between J6 & J7 and Dublin Port Tunnel)
M1 - Dublin towards Northern Ireland
M4 - Dublin to around Kinnegad; N4 - Coralstown towards Sligo & entering Dublin
M6 - Kinnegad towards Galway; N6 around Athlone & entering Galway
M7 - Dublin towards Limerick; N7 entering Dublin after Naas; include MidLink M7/M8 toll in Co. Laois
M8 - Dublin to Cork (via M7) (N8 entering Cork)
M9 - Dublin to Waterford (via M7); N9 near Waterford)
N10 - road from M9 to Kilkenny
M11 - Dublin to Wexford (N11 along some parts, including around Wexford)
N13 & N15 - Sligo towards Northern Ireland via Letterkenny
N16 - Sligo towards Northern Ireland (to Enniskillen)
M17 - Rathmorrissy Interchange to Tuam; N17 after Tuam towards Sligo
M18 - Limerick to Rathmorrissy Interchange; N18 around Limerick
N20 - Limerick to Cork not sure if this could fit; M20 near Limerick
N21 - M20 towards Tralee
N22 - Cork towards Tralee
N23 - Joins N21 & N22
N24 - Limerick towards Waterford via Clonmel
N25 - Cork towards Rosslare Harbour
N27 - N8 in Cork towards Cork Airport Business Park (but only needs to go as far as the N40)
[N30 - Enniscorthy towards New Ross]
N40 - forms southern part of Cork ring road
N60 - N17 towards Castlebar (could also add N5 as well or instead)
(N84 - Galway towards Castlebar) 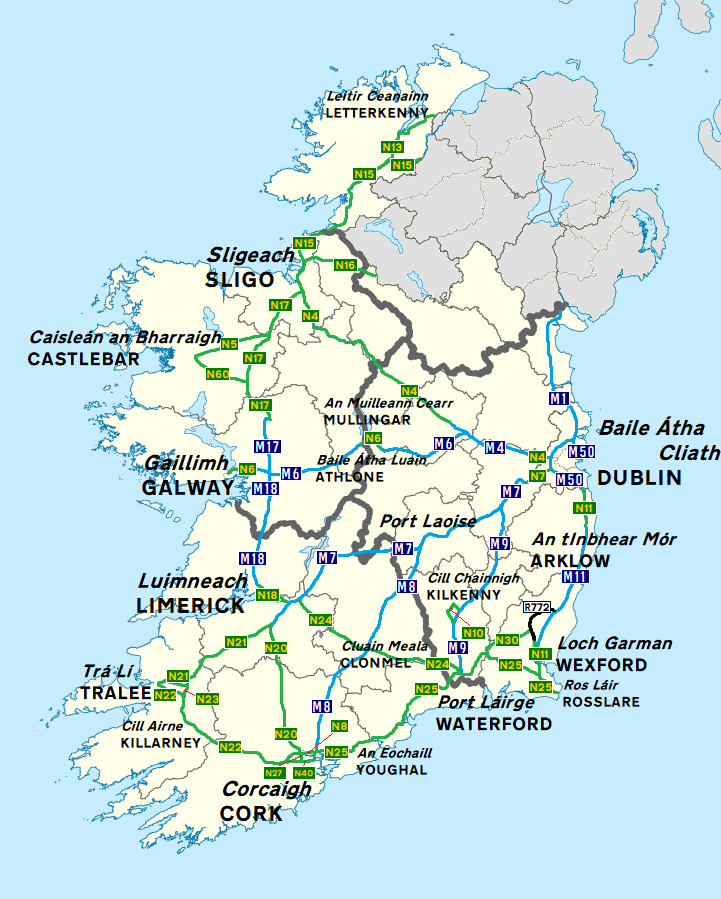 Amazing spot on information there. I'd just like to add a few bits of scenic information for the North West.

Tolls
There are 11 tolls located across Ireland, as can be seen below.

All tolls use barrier operated toll plazas, with the exception of the M50 barrier-free toll (which is paid automatically, provided you have an account, or online before 8pm the following day).

"Express lanes" can be found at all other toll plazas, where cars, jeeps and small vans only with an "eToll" tag can pass through the toll hassle-free.
The Dublin Port Tunnel toll is free for HGVs (which Yardem & HRTrucker have mentioned) and buses/coaches, which must keep left when approaching the plaza.

Don't forget to add our tri-colours.

I hope the scale that is planned is not 1:19, 'cos i'm thinking it will be far too small to fit anything in.
Also, I really hope you base it around the country lanes and rural roads, small towns and villages 'cos they are beautiful and it would be an absolute crime not to.
Saying that.. ETS2 already has an abundance of motorways and it'd be a shame if the Ireland DLC was the same.
ie. full of motorways.

Haven't posted here in a while so time for some updates

- As I mentioned, the M7 widening scheme at Naas had been completed (having been opened to traffic in November 2019). However, the new junction 9A (Osberstown), with a new bypass for the town of Sallins, was not completed at this time. This bypass opened yesterday. While this regional road is more than likely not going to come due to the scale, it now brings an end to the M7 project.
- There are many road constructions taking place in Ireland, a list of which can be found here. Road constructions which are at the at construction phase can be found at Section 3 of the National Road Projects Status: 2021

On a separate note, this website shows all the different locations of roadside art on national roads and motorways, one of the most famous structures being Perpetual Motion located near Naas.

@paulieGTR I think that SCS will create Ireland at the 1:19 scale, as they have done with other countries (except for the UK of course, though we all know this is an extremely outdated map). There is also a big reliance on motorways, particularly for truckers, which means that they cannot be ignored. However, there are still plenty of national roads that can be included, with towns that hopefully will be represented too.

Yeah I understand that re. the motorways.

Pet foods/farms and the like, for the these regional and country roads would be nice.
A 50:50 mix of rural/regional roads and motorways that are drivable would be great.

Oh and the 'ART'.. we definitely need that.