The highway that crosses Vila Nova de Cerveira is the N13 that runs along the River Minho, the northern border of Portugal. We can even think of a route without taking the coast and connecting some very interesting cities in this extreme north of Portugal.

Just to continue talking about something very important and curious, which I believe most people don't know. (I also didn't know until yesterday).

The smallest international vehicle and pedestrian crossing bridge is at IBERIA !!!

It unites Spain with Portugal in '' El Marco '', near the city called '' La Codosera '', a municipality in Extremadura, Spain
''Marco '' is also the name of the community on the Portuguese side, a district of the municipality of ''Arronches'', in Alto Aletejo, Portugal.


The smallest international bridge in the world measures only: 3.2 meters long and 1.45 wide, it is above the Abrilongo stream.
No car goes by, obviously. Yes, it is perfect for connecting the two countries on foot or by bicycle.
On both sides there are old-fashioned markers, in typical stone with the '' E '' (Spain) and the '' P '' (Portugal).

Okay, but everything can also be used for the ETS2 game, correct. Very close to this location there is a functional cross-border active highway that allows a secondary route, and which is also perhaps the smallest active international highway bridge, with a flow of trucks and other vehicles.
Street view: you can see how the small bridge See on the other side the sign of the European Union welcoming you in Portugal.
https://www.google.com/maps/@39.1807478 ... 6?hl=pt-br Access is a branch of the highwayBAV-5004.

Now a view from the perspective of the '' driver '' on Portuguese soil, observing the European Union's welcome sign on Spanish soil. Also note one of the smallest active road bridges on the planet.
https://www.google.com/maps/@39.1804835 ... 6?hl=pt-br The road access is made in the city of Arroches through the so-called '' Rua de Arronches ''. Actually functional highway is an extension of the N371 highway. Go straight and you can reach the international bridge International bridge over the "Arroyo Abrilongo". https://www.google.com/maps/@39.1245144 ... 2?hl=pt-br

Notice how many very rich possibilities the region of the border between Portugal and Spain, can allow entirely interesting routes through different places.

El puente de El Marco '' allows SCS Software's creative team to even make a proposal for better tourist attractiveness for that small bridge. After all, it is the smallest interactional bridge in the world (with daily traffic and road traffic for cyclists, pedestrians) and the smallest in the world!
Top

Is this bridge part of A1 or N113?
Proud student of Games and Multimedia in the Polytechnic of Leiria - the Portuguese capital of game development
(and still hopeful the city will feature in the game with a garage someday)
Top

More images of Leiria, this time from the industrial zone (Cova das Faias in Marrazes, also known by the abbreviated name of Zicofa) and IC2. All pictures here were taken by myself last friday.

The Iveco dealer. Not located inside Zicofa itself, but i think this would be an interesting picture to put because of the shape and Access can't be made by IC2 itself, but by a street aside the road. Is any prefab like this already present in ETS2?

Map of Zicofa. For some reason, the orientation of the map on ths sign is south-north. IC2 is in red, while N113 is the purple road that is in the upper part of the image (the part inside Zicofa is incorrectly called "Variante"). Another omitted information in this map is that the roundabout on IC2 goes over the road.

The roundabout of access to Zicofa seen near the Iveco dealer

The east exit of Zicofa. Speed limit here is 50.

Entry of Zicofa by the eastern exit. The towers are concrete factories, while the green building is a concrete prefabs factory, and the red building is a factory of industrial equipments.

This building is actually for sale. Its previous owner was a footwear distributor which entered an insolvency process.

A trailer from the local pig farming facility. Is this kind of trailer already in the game? That reminds me of the cattle transporter, but without openings.

Front of the Scania dealer inside Zicofa. Previously, this building was a Renault trucks dealer

Backside of the Scania dealer

The red banners indicate the current position of the Renault dealer

I have no idea about what is being built here. A sign indicated that was something related to minerals

Backside of a resins and polymers factory a little outside of the map, in the continuation of the green road in the map westwards. A transport company is also present in the other side of the street, but i could not get a good moment to take a picture of it

This building actually is a storage and distribution center of poultry products. The factory and main production centers are located in Figueira da Foz. Note: this company has its own truck fleet and does most of its logitics by their own.

Ignore this, the speed limit inside Zicofa is 50km/h, but the recommended speed is 30km/h. This building here looks more like a shop than a factory, and its products would be automatic gates and doors.

i don't know if this is a rare case, but it's interesting to see this distance indicator sideways

This is a retailer supermarket, but the most interesting lies aside it: a moulds factory

The aerial roundabout of access to IC2, as seen by the closest i could while riding a bicycle

After leaving the Zicofa area, the speed limit on IC2 returns to 80km/h for cars, staying the same until A19 splits again into two routes, with one staying with 80km/h limit and tolls, and the second keeping the IC2 moniker, but with speed limited to 50km/h as it starts to trespass smaller villages as Batalha (which monastery is aside the road) and Porto de Mós, where A19 effectively ends, giving way to IC2 to Lisbon or IC9 until Tomar, but with plans of expanding that road to Ponte de Sor
Proud student of Games and Multimedia in the Polytechnic of Leiria - the Portuguese capital of game development
(and still hopeful the city will feature in the game with a garage someday)
Top

For those interested, here are the trailer sales numbers in Portugal for 2017 and 2018. 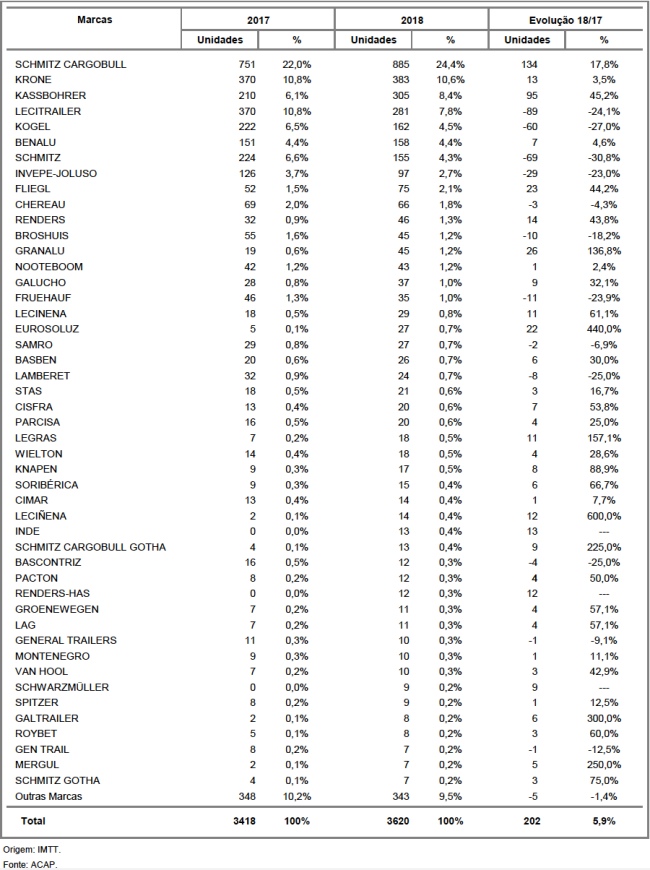 Schmitz Cargobull's main dealer is in Rio Maior, on IC2. They are most common with L-XXXXXX plates, but they can be seen with almost every district plate.
Krone's sole dealer in Portugal (Keytrailer) is located in Porto de Mós, further north in the same road. The most common plates for Krone trailers are L-XXXXXX, SE-XXXXX, LE-XXXX and C-XXXXX. LE-XXX plates appear sporadically in older trailers.
Kässbohrer's only dealer (Tracto-Lena, which also deals heavy machinery) is in the same road, in the southern entry to Leiria. Apparently it's a recent entry to the Portuguese market and all trailers i witnessed or were found on search engines had LE-XXXX plates.
Lecitrailer seems to be the most well represented of them: with representants in Porto, Coimbra, Viseu, Santarém, Lisboa, Évora and Faro. AV-XXXXX and SE-XXXXX plates are also common for them.
Kögel's representant is present in Vila do Conde and Mangualde near Viseu. Its most common plates are GD-XXXX, C-XXXXX and L-1XXXXX.
Proud student of Games and Multimedia in the Polytechnic of Leiria - the Portuguese capital of game development
(and still hopeful the city will feature in the game with a garage someday)
Top


Some of the spawning ratios should be revised:
BG and VR stay the same.

GNR police vehicles should spawn with the GNRX-0000. The last character vary according to the vehicle type:´

The BMW Series 5, Nissan Qashqai, Octavia 2009, Fiat Punto, Renault Clio and Megane should spawn inside Portugal. The Mini should spawn less often.
Proud student of Games and Multimedia in the Polytechnic of Leiria - the Portuguese capital of game development
(and still hopeful the city will feature in the game with a garage someday)
Top
Post Reply
145 posts