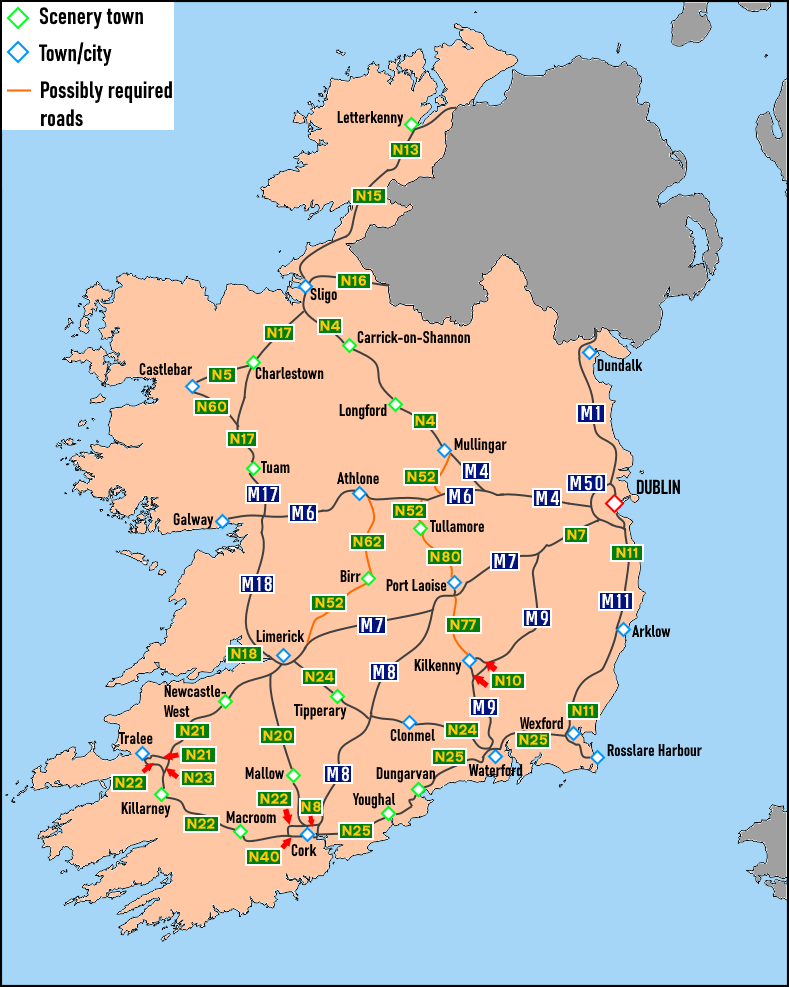 For the port I'd take Rosslare over Cork. Rosslare gets ferries from Fishguard and Pembroke in Wales not just a ferry to France. Rosslare has a ferry to Spain as well, don't know if such long ferries are wanted in game though (I rather drive).

Dublin is a nice port close to the city. Think you're still allowed to drive from the ring road to the port through the centre on the R148 next to the river Liffey, or the Garda is just really friendly for a Dutch lorry driver

Like someone said the port tunnel is toll free for trucks. We still need to stop for a barrier which then opens automatically.

New Ross would make a nice scenic place on the N25 from Rosslare to Limerick and Cork. New Ross has the Dunbrody Famine ship. https://maps.app.goo.gl/iqaBbR3iQsy4cKQ58
Ship as seen from the N25 E30. Driven past it quite often on my way to Askeaton / Limerick.

The Dunbrody Famine Ship Experience is a popular historical attraction in New Ross, Wexford. Centred on an authentic reproduction of an 1840s emigrant vessel, the attraction provides a fascinating interpretation of the famine emigrant experience
Copied from visit Ireland.

Tipperary as a scenic place on the N24 and could be used as a achievement "Welcome to Tipperary, you've come a long way". It's on a blue sign when you enter Tipperary, the place itself.

zoom in on the road sign with the deer

. It seems the Irish deer are male. A lot of them seem to have been modified in this way.
E20
https://maps.app.goo.gl/s2995QTcsdizA4P69

Ireland will be nice when it comes. Love to drive there with my truck. People are mostly a lot more patient with trucks. And on N roads people move over to make place for each other to overtake.
And when you come from Rosslare and have to go to Limerick. You still have to drive a lot of N roads.

First time of the ferry in Ireland I asked a Garda how fast I was allowed to drive outside of villages. His answer still makes me smile

. Flat out will be fine, you're speed limited. An hour later I found out what he meant, when a Scania from O'Toole came flying past me and I was already doing 90km/h on a N road

. Some still seem to be bit allergic to speed limiters in Ireland nowadays.
Top

@HRTrucking great to hear the opinion of an Irish trucker. I have been to Ireland and yes it is very beautiful. I can immagine going into Tipperary, whilst hearing 'It's a long way to Tipperary'. I also think that adding the Jameson distillery in Cork would be an interesting depot (I have been there).
World of Trucks page
My polls:
How do you want the UK to be rebuilt/revisited
Which map expansion do you think is the best?
Top

@natjer3 I'm Dutch, but the company I work for has some work to Ireland from time to time. Mostly to Askeaton in County Limerick.

Jameson would be nice yeah, been there as well when I had my weekend break in Cork. There's also a industrial estate close to the center of town and you can drive through the town over the bridges there.

I could imagine that with Tipperary as well. Think it would be a nice achievement as well with "you've come a long way". Maybe when you do a long job to Ireland and drive through Tipperary.

Guinness factory is in Dublin, then we could drive through Dublin when we go to the port

I think the Guinness Brewery might be too far away for SCS to add it in, due to the scale, if you wish to go through the city centre (R148) as well as to the port. The M50 Port Tunnel seems like a better way. But I hope that we can drive in some of the centre, such as past the 3 Arena and the Convention Centre, even if it's a small bit like they did with St. Petersburg.
Last edited by Mohegan13 on 04 Jan 2020 19:40, edited 1 time in total.
Reason: Quote Removed - Don't quote the post directly above.

Ireland-Britain Ferry Links
This is a sibling-post to the one in the UK re-research thread that aims to show and explain the ferry ports that should be included once Ireland is in the game. This list covers all 32 counties, or at least some of the eastern coastal ones.
--
Larne
Sails to: Cairnryan
Operated By: P&O Ferries

Located 19 miles north of Belfast, serving as a sort-of secondary freight port for the city as it is the shortest Britain-Ireland route.

As a side-note, a must-include dockland landmark is the bright yellow Samson and Goliath cranes (visible from the freight port).
--
Warrenpoint
Sails to: Heysham
Operated By: Seatruck

Located south-east of Newry, this port is right on the Northern/Republic border, with just a small river dividing the two. There are plenty of great cross-border views on the approach to it (be sure to include Narrow Water Castle!), and I'd put it in the game just for geographical uniqueness alone.
--
Dublin
Sails to: Heysham, Bootle, Holyhead
Operated By: Seatruck (Heysham and Bootle), P&O Ferries (Bootle), Irish Ferries and Stena Line (Hollyhead)

Honestly, I'm struggling to figure this place out; I've never been to Rosslare. Anyone able to show how exactly trucks pass through Rosslare?
Top

I've been to Rosslare many times. This map probably won't show it. I'm not entirely sure whether or not the ferry docks are assigned like I've done, it just where I see the particular ferries everytime. Also not sure whether or not the waiting area you marked (near the Stena Line dock) is in fact a waiting area. Quoting Mohegan13, I reserve the right to be 100% wrong.

Now that I've gone back to Street View, I think your map is a lot more accurate. The thing that threw me off was me seeing this sign and at a glance mistaking one of the car images as a truck akin to this. Thank you for your contribution (and for being a clearer labeller than I am)!
Top

Traffic lights
Ireland uses a variety of traffic lights. The three most common are: example 1a & example 1b (a form of Alustar ["Techmiracle"]), example 2 (aka "Mellor"/"Plessey") and example 3a, example 3b & example 3c (aka "Siemens optic"/"Siemens Helios"/"LED optic").
The first one is very common in Dublin, although it can be seen in other places such as Clonmel and Enniscorthy. The third is very similar/the same as used in the UK in real life, but slimmer than the ones currently used in ETS2.
Some traffic lights have arrows filters: while some have arrows filters in all three colours (red, orange and green), it is extremely uncommon. Instead, it is usually only the green light that has an arrow filter (example 3b). Traffic lights may have arrow filters on a separate traffic light (full [example 3b] or displaying no red light [example 3c]). Others may have (flashing) amber arrows, usually diagonal (example), which means you may pass freely but most often have to yield to traffic soon after.
Traffic light sequence: green > amber > red > green
Last edited by Omicron13 on 23 Jul 2020 20:14, edited 2 times in total.

Omicron13 wrote: ↑
19 Jan 2020 20:31
I've been to Rosslare many times. https://i.imgur.com/w5eXmPY.png]This mapprobably won't show it. I'm not entirely sure whether or not the ferry docks are assigned like I've done, it just where I see the particular ferries everytime. Also not sure whether or not the waiting area you marked (near the Stena Line dock) is in fact a waiting area. Quoting Mohegan13, I reserve the right to be 100% wrong.

You got it right. Although we normally just get our tickets in the office and drive straight to the ferry or wait for it to arrive inside the docks.
Waiting area is only used by people who don't want to walk or don't know you can get tickets earlier. Or if you want to go shopping in Rosslare.

Maybe a detail for map makers on the quay next to the Stena are usually some new Scania trucks parked up.

When I got my tachograph on ferry crossing it's easier to be parked inside the docks and hope dispatch booked Stena to Fishguard, Fishguard has a good parking in town.
Hopefully SCS never introduces ferry crossing times and this crazy rule the EU made for ferry crossings when you're out of time. Even the instructors get it wrong