As we're doing some pre-research for ETS2, we'd like to know your opinion on some of the things which we shouldn't miss in the game in our future planned DLCs - in this case for the SPAIN state.

A must have in Spain: the "puerto de Etzegarate". It's a mountain pass on the A-1 highway in the Basque Country. As one of the videos I posted below says: the wackiest motorway mountain pass in Spain. The southbound lanes use the old national road, hairpins included, creating this wonderful (and dangerous) mess. Southbound lanes crossing above the Northbound ones: Approaching the second hairpin, where else will you find a highway with a 30 km/h speed limit? As you can see it's used a lot by trucks, as A-1 is the connection between central Spain and the rest of Europe west of the Pyrenees. You could also use AP-1 (approx 30 km west of the A-1), but it's a tolled highway. A highway going through someone's backyard 
On the top of the hill there is a rest area: I don't know if SCS already has found this information, but as administrations webpages and access to information here use to be a bit messy, I'll post it just in case.

That's the link to the webpage where is published all the technical normative about roads on Spain: https://www.fomento.gob.es/carreteras/normativa-tecnica

Lots of different documents for different purposes. Most of them are not necessary for you because are about how to physically construct a road, but the ones about signaling for example will be useful for sure.

When I've more time I will think about special places, key roads and so on that could help you in a future

Great idea SCS! Lets try to help you with the research. 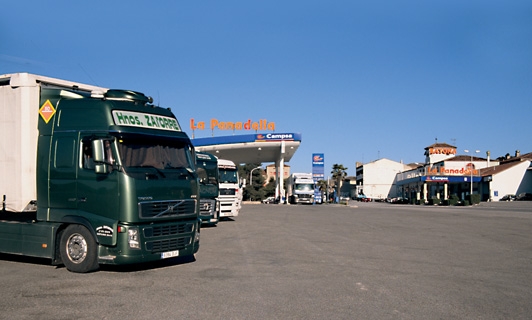 Located between Barcelona and Lleida it's an iconic and historic rest-area, very well known by truckers:

Also located between Barcelona and Lleida and another iconic part of Catalonia. They can be seen from the road A-2 in the way to or from Barcelona.

Both places are located on the top of a mountain, so once you've crossed them, you go downhill. 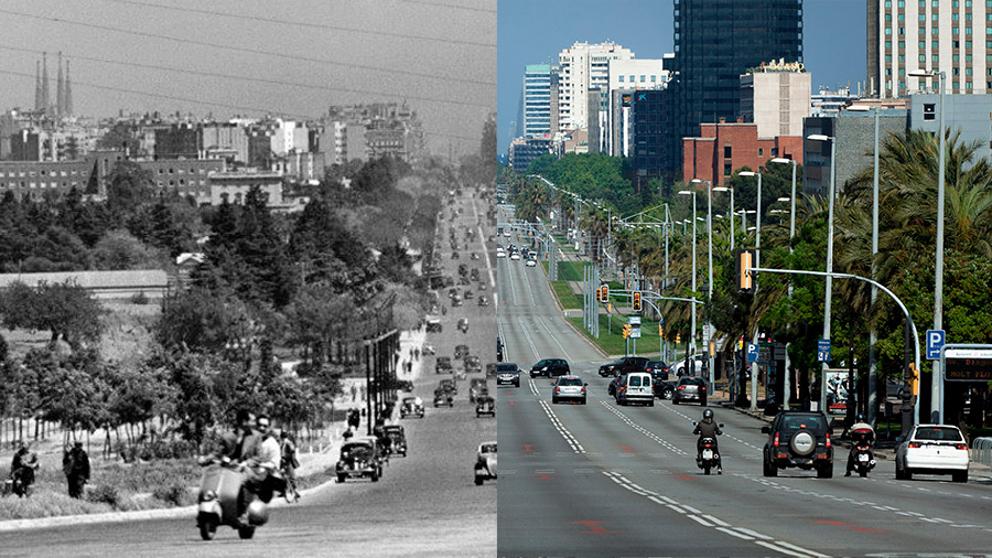 Iconic entry/exit of Barcelona (West part). Diagonal it's the name of the street, but at the same it becomes (or connect) with A-2 road, the one that connects Barcelona, Lleida, Zaragoza and Madrid.
Top

Iberian Peninsula is connected to the rest of Europe with two main highways on the extremes of the Pyrenees (where the land isn't so rough and mountains lower).

In the Mediterranean side, that highway is the tolled AP7 going south until Barcelona. On the name of that road, A is for "autopista" (highway) and P is for "peaje" (toll). So, all AP-XX are tolled highways and A-XX are free highways on Spain (blue identifier with white letters)

Half the way from the French border to Barcelona is Gerona, small city but with lots of food, machinery, construction and a bit of paper industry near it. So, it could be modeled on the "disaggregated" way more than all the yards concentrated in one spot.

Between Barcelona an Gerona, the two more iconic landmarks are this bridge for the high speed railway over the highway and this resting area.

AP7 surrounds Barcelona from the inland side, flowing through all the dense industrial and commercial sites there are (the city itself has lost most of their factories for residential and offices zones). When the AP7 is near the southern part of Barcelona and it's airport (near in your 1:20 scale I mean), it splits in 2 directions. One keeps the AP7 name, continues south following Mediterranean coast all the way until Gibraltar. The other branch turn west, changes name to A2 non-tolled highway and goes to Lerida. Is there where Montserrat ridge that @Joan93 mentioned becomes an omnipresent view for lots of kilometers, due the terrain shape, the high that mountain is and it's very distinctive look (if I remember well, almost unique worldwide).

The next relevant city following AP7 south is Tarragona, with one of the biggest chemical industry zones of Spain. Some kilometers to the south there's the nuclear power plant of Vandellòs just at the side of the highway and some more kilometers to the south there's the viaduct over Ebro. Bridge isn't iconic at all, but it's the longest and abundant river of Iberian peninsula and it's very close to the river's mouth. So, it's a landmark on its own.

Returning where the AP7 splits near Barcelona, that A2 highway connects at Lerida (city with lots of food industry) with the with AP2 tolled highway that comes from Tarragona. That AP2 is the main road that goes to the central part of Spain for all the trucks that enter Iberian Peninsula from the Mediterranean side. So it's a must on a modeled Iberian peninsula for a truck oriented game like yours. If you ever add to the game more weather conditions, the Lerida zone is known for its infamous fog that can be dense as smog and last for lots of days. Bad combination for the huge amount of truck traffic that sustain that AP2.

There's a free highway named C-25 that connects directly Gerona with Lerida zone, to avoid do all the detour until Barcelona. I use to see lots of Portuguese trucks doing that route. It's a very scenic road because he crosses lots of mountain ranges (he's plenty of viaducts and tunnels and good views from above over plains far away). Very scenic but a pain in the ass for low-HP trucks, because the slopes on that road are hard and very long. Here's the spot that I think it defines better that highway. Driving west, after exit a long uphill tunnel, you face a severe downhill doing a very long almost 180º left turn that is a viaduct. At the edge of the turn, the downhill becomes a hard slope uphill (and harder if you take the exit there) and enters another tunnel. It's like a rollercoaster turned highway.

If you decide to add Andorra country on the game, there's a road that comes down from Tolousse, crosses the country and goes down to Lerida where it connects with the main highways that I already explained. That route crosses some of the most scenic zones of this part of Iberian peninsula (talking about main roads, of course) like Pas de la Casa (even now there's a tunnel to avoid it) or the Coll de Nargó zone

All what I've explained so far, except Andorra itself, belongs to the autonomous community (Spanish "states", like German Länder) of Catalonia. It's a data relevant when you model the police cars (more info about that in other message when I've time).

Maybe you already know this, but just in case

As a strategic point, I allow to first introduce the "Desfiladero de Pancorbo", which is an impressive and incredible throat of mountain that is crossed by the autopista AP-1 and by the N-I. Those are strategic axes between France and Portugal, and between north and central Spain. This is located between Burgos and Vitoria-Gasteiz. 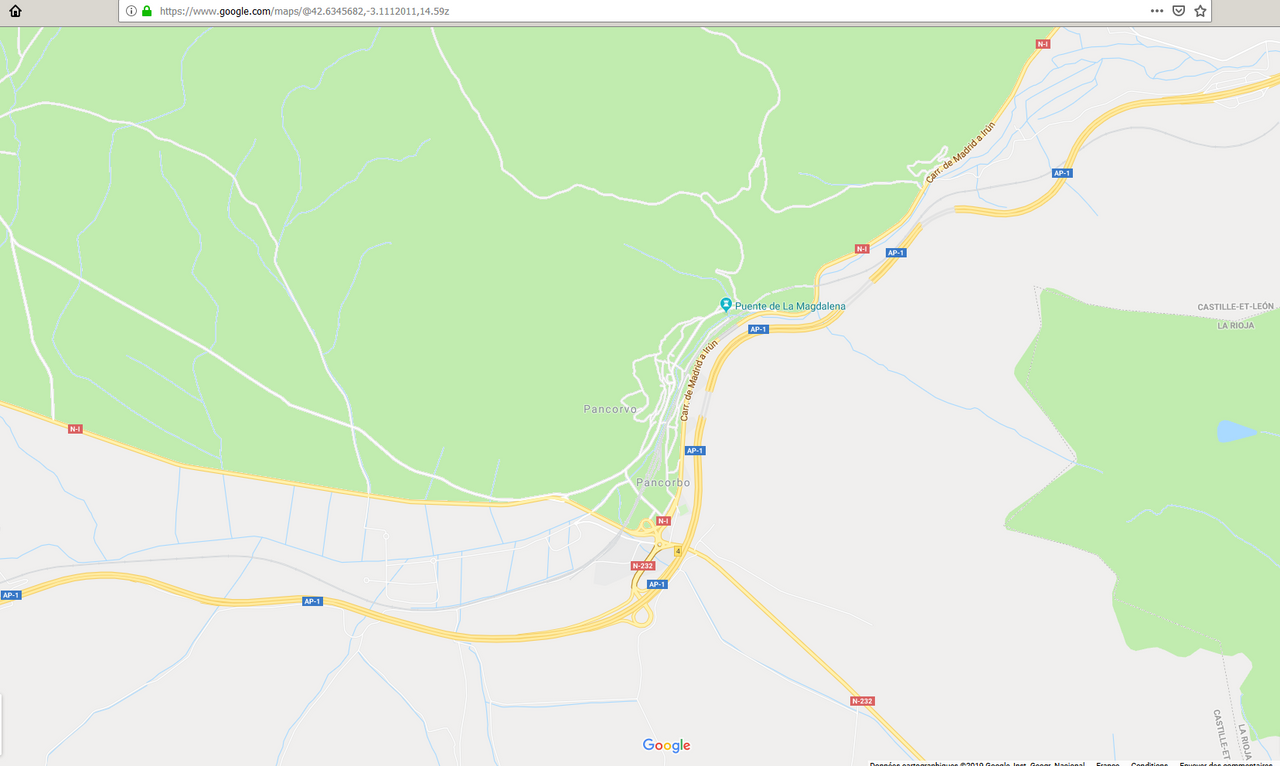 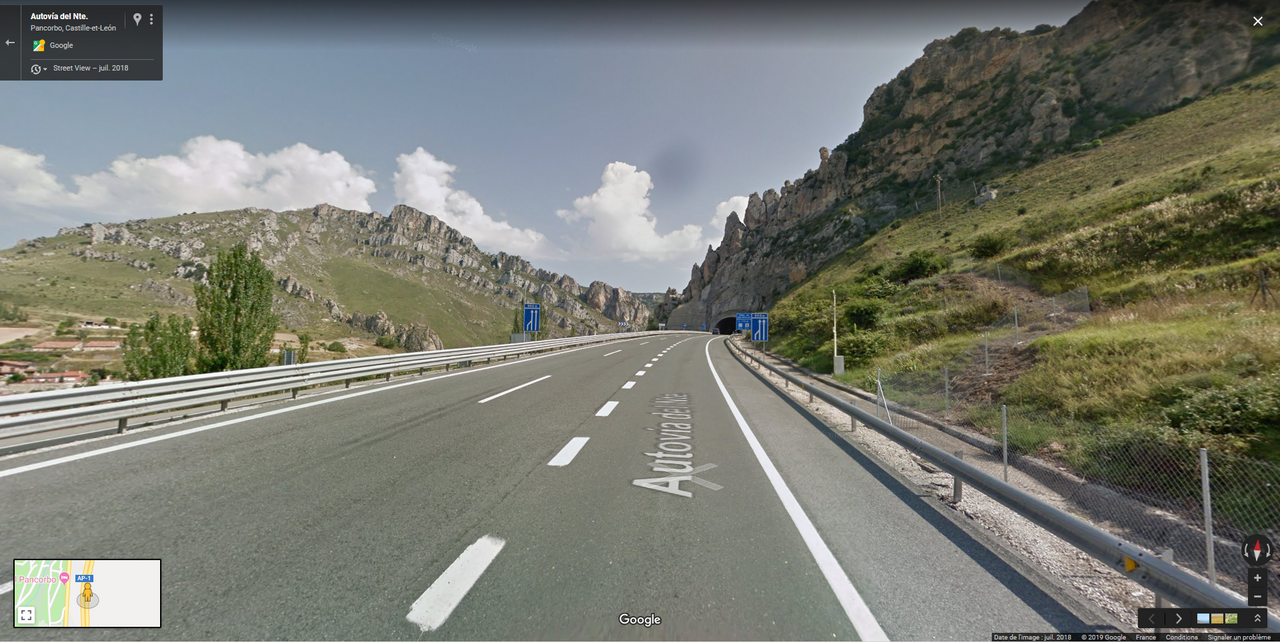 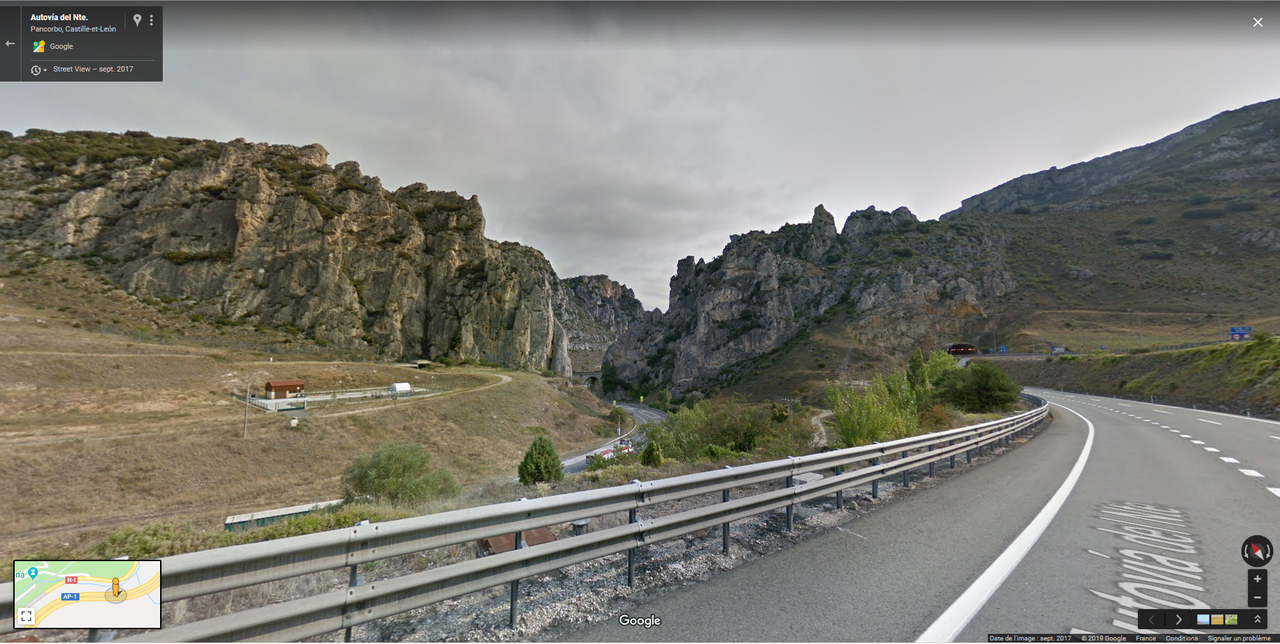 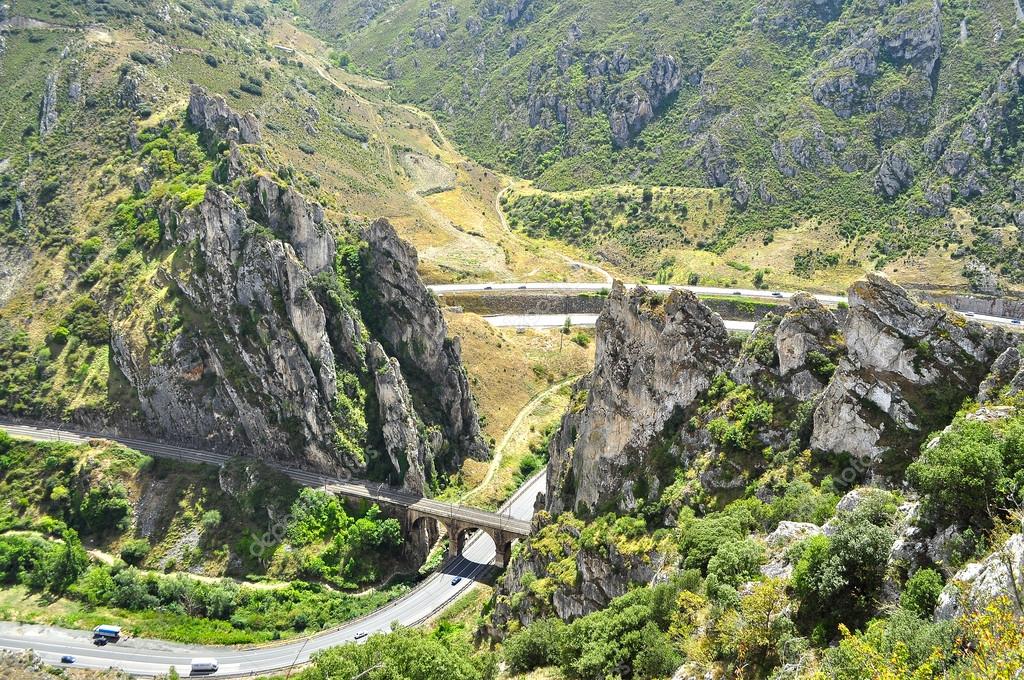 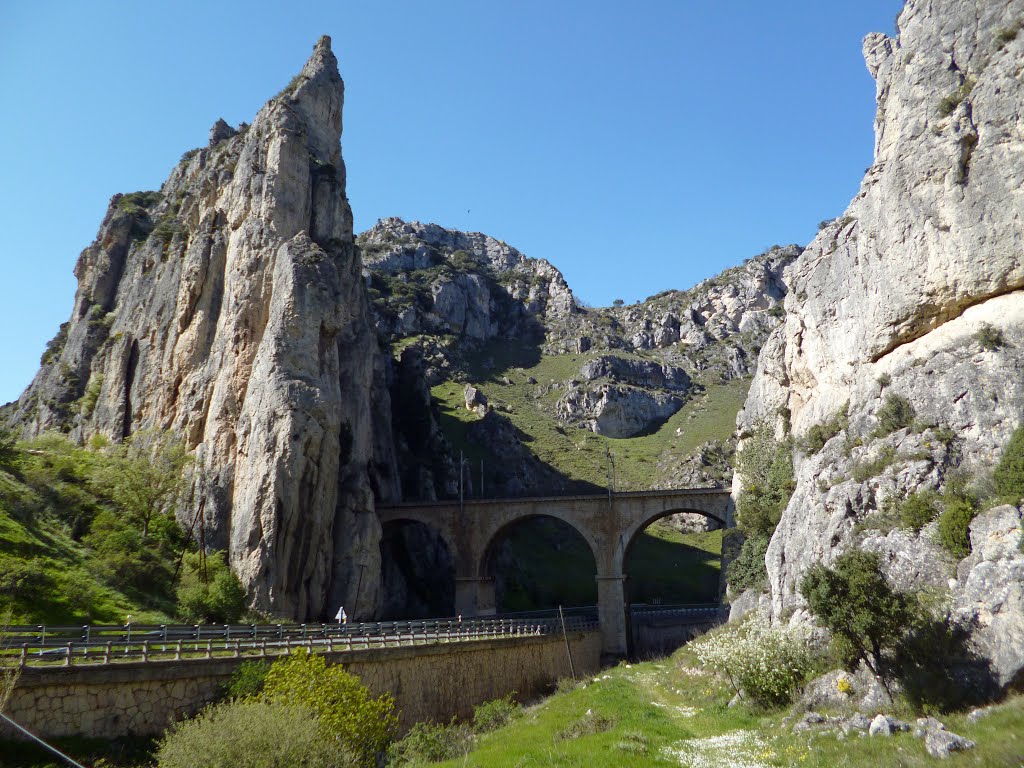 I would like to show you now an impressive bridge in the city of Seville, crossing the river Guadalquivir, "el Puente del Centenario". It's a bridge on the SE-30, a strategic autovia in the city of Seville that connects the A-4 to Cadiz, the A-66 to Mérida, and also the A-49 going to south from Portugal and Huelva, or even more the A-4 to Madrid and Cordoba. 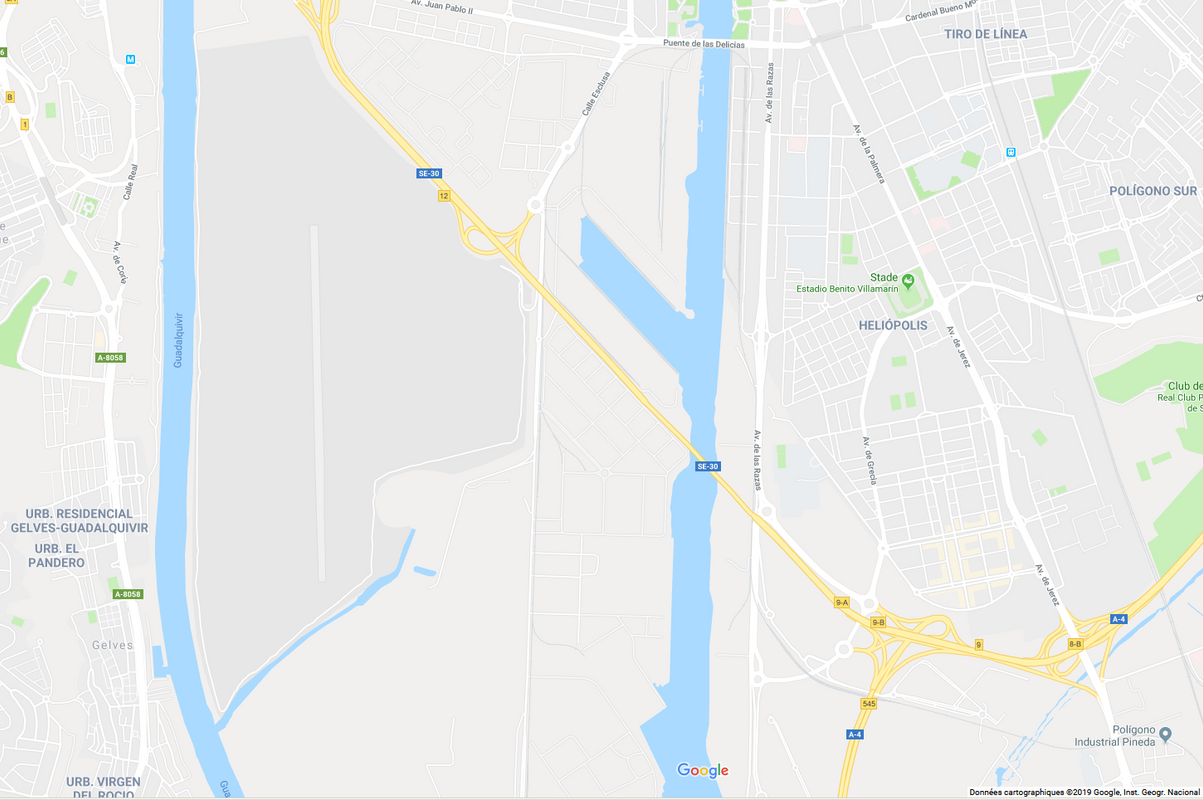 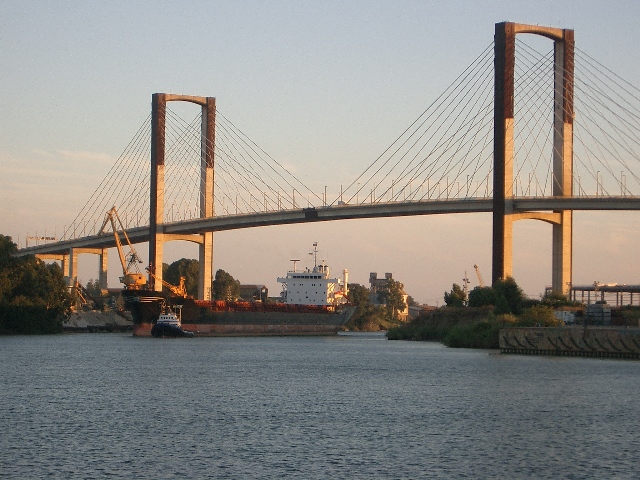 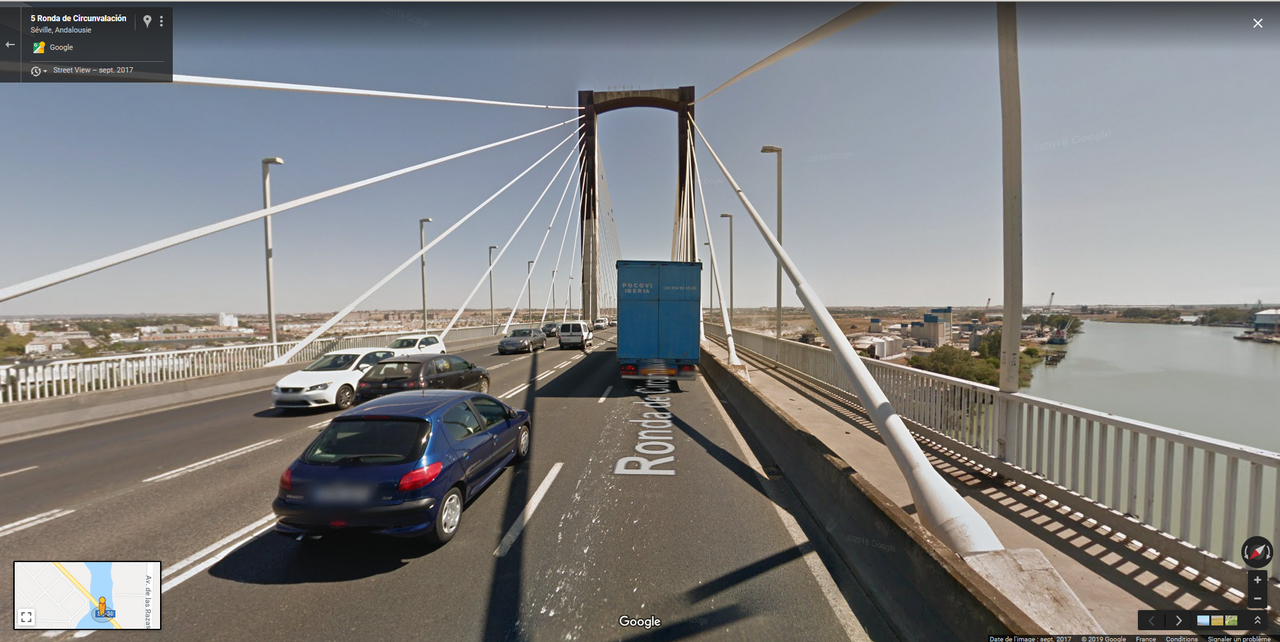 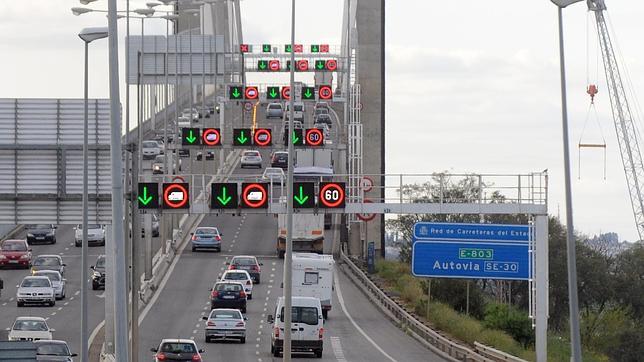 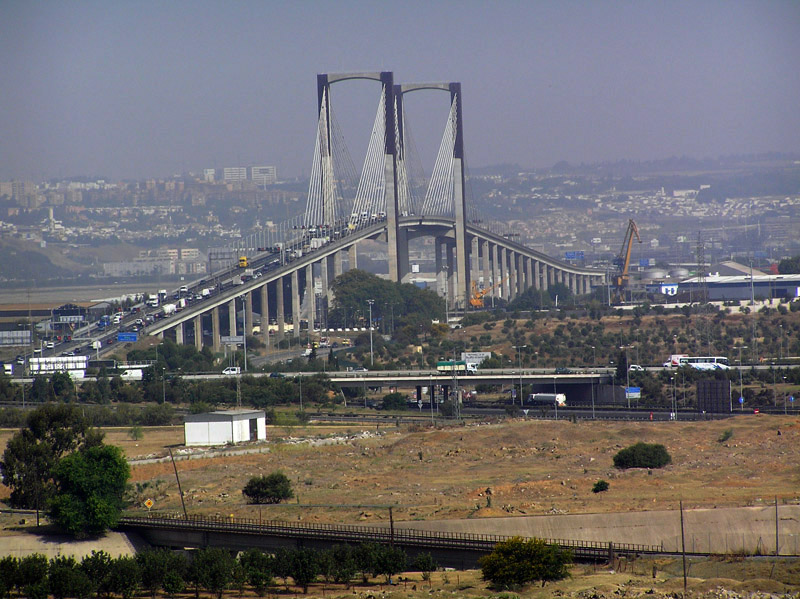 And this could be a pain in the ass, because maybe had to force SCS to modify all the trailer models. If I'm not wrong, actually they only show 1 license plate everywhere they come from.
Top

As promised, a bit of info about police forces on Spain.

I don't known about other European countries (just a bit about France); but I think here we have the most complicated scheme of police forces. Here we go:

First of all, a link to the Spanish Wikipedia article that briefly describes every police force on Spain: https://es.wikipedia.org/wiki/Fuerzas_y ... pa%C3%B1a)

In Spain there are 2 main police forces: "Cuerpo Nacional de Policía" (CNP, also known as "los nacionales" or "la policía") and "Guardia Civil" (GC, a militarized police force). You can find vehicles of both forces on the roads but only GC has a dedicated traffic control department. So, CNP polices can stop an infractor on a highway if they meet but mostly will wait a GC patrol to finish the paperwork. CNP is more oriented to border control, investigation and public safety on cities.

Then, there are some states (named "Comunidades Autónomas" here) that have their own police forces: "Mossos d'Esquadra" for Catalonia, "Ertzaintza" for the Basque Country and "Policía Foral" for Navarra. The first two have exclusive traffic control competences on their territory, so there will not be GC patrols on there. In Navarra, its police force collaborate with GC in traffic control.

Last but not least, cities big enough have their own local police forces, usually called "Policía Local" or "Guardia Urbana". They are mostly focused on public safety and traffic control, so they can be found patrolling and fining people inside their city borders.

On the wikipedia article there are examples of vehicles of all those police forces. As side notes, consider also those three details:

- Traffic department GC are well known for their very distinctive two motorcycle patrols (if someday you add motorcycles to the game)
- The local police department of each city can have their own color layout on vehicles, so I doubt you will want to model them all. In case you want to add police cars of those forces, they use to be mainly white with marine blue and high contrast yellow details. Any coherent scheme of that kind could be enough.
- Traffic department of "Mossos d'Esquadra" use familiar versions of medium sedans (VW Passat or Seat León) and are changing just now to a new color scheme: 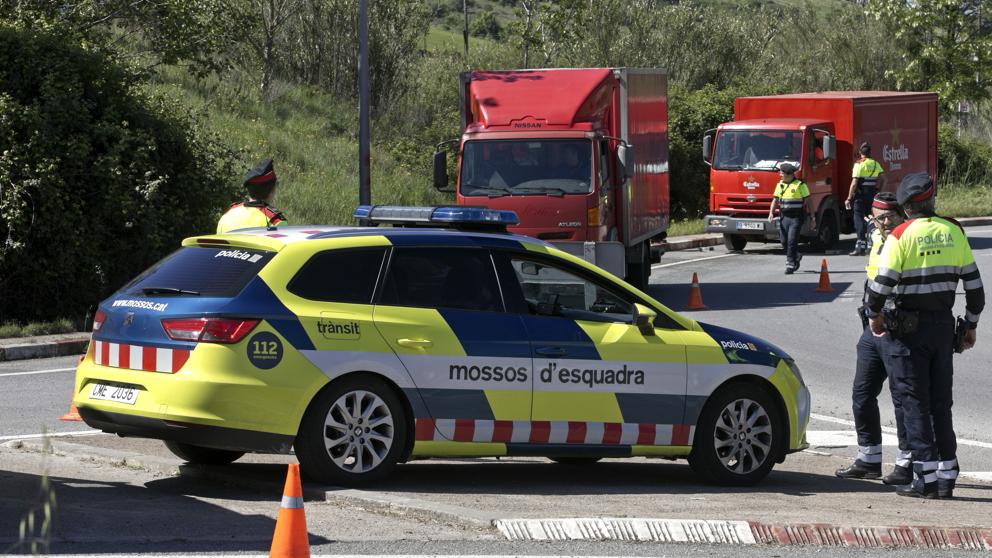 As an addition, notice that these police forces use different license plates.
http://www.sme-matriculas.es/mat_tipos.html