As you know, GERMANY rebuild project is currently ongoing - and we can use your knowledge about parts we didn't rebuild yet.

Also if we missed something really important, post it here please. Unfortunately it can be really easy to miss some key spots.
We can judge only from what we read or see, while those who live there, have driven there or visited there, can point us towards some famous truck stops, interesting landmark, points of interest etc.

So we'd appreciate any tips which could be helpful for us and that could easily work with in-game mechanics. Try to keep in mind that we're interested in places connected with trucks and roads. So if you have some tips, we'd be grateful.
Don't be shy to add photos / videos of said locations (in better quality, so our graphics can use them as pattern).

I have a little thing:
If I remember correctly, the famous part of the A7, "Kasseler Berge" isn't included in the original map. So, would be really cool too see it after Germany rework.

It would be cool to see more truck plants in the game. You could add MB Trucks plant in Wörth am Rhein (you could make it a part of Karlsruhe) and MAN in München. And don't forget to continue A5 to the south or rework at least the 'intersection' with A8. It would also be cool to see a larger chemical plant in Mannheim/Ludwigshafen as a parody of BASF and more car plants, e.g. in Wolfsburg, Ingolstadt, Rastatt ... It is almost a shame that there are big car plants in the new DLC area but none in Germany.

I talked to Pavel - don't have questions anymore ...

Admin of the Truck Simulator Wiki and translator, as well as part of the FSG 1:1 map team

It would be nice to rebuild the section of the road from Duisburg to Calais. I know that this is also a project over other countries that probably get rebuilded after Germany is done.
Actually this road that is represented in the game is a motorway in real live. It would also open up the connection for new cities to join those countries.

I know it will not matter, but it would be great if in the reconstruction of Germany the legendary Nürburgring circuit was included, it has nothing to do with trucks and others, but it is usually a place of concentration of trucks in the races of trucks, tests on trucks, etc ... even in more contained dimensions, as was done for example with the inclusion of the Tucson circuit in ATS.

Maybe you could remove the small road in the north-east towards Rostock and place there the real motorway A20 between "Kreuz Uckermark" and Rostock.
Same would be nice for the road between Dresden and Leipzig and place the A14 from "Dreieck Nossen" to Leipzig which can also be connected to the A9.

I have some suggestions for the area near the Köhlbrandbrücke bridge and the port of Hamburg in general.

See the area marked in black: 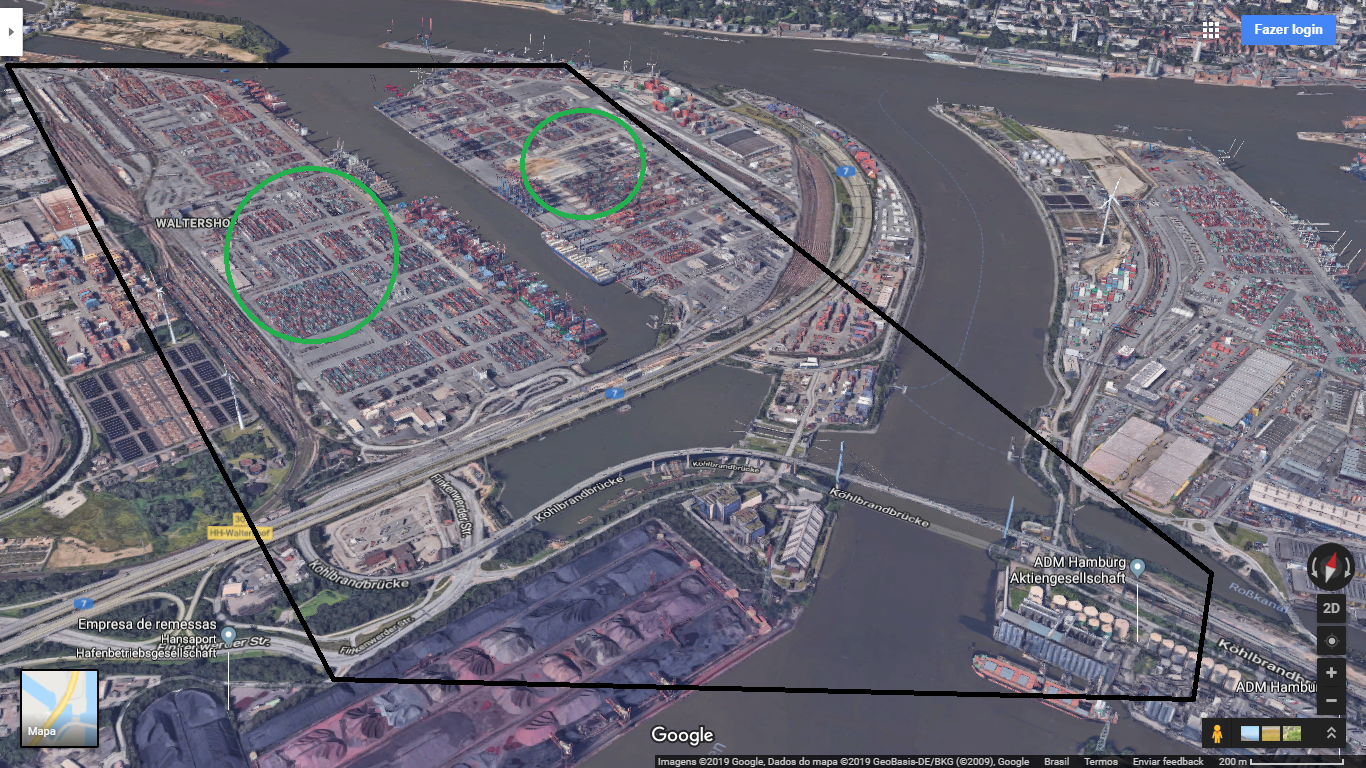 Since in the city of Hamburg in the game there are no container terminals, it would be interesting to have in the game the two terminals marked in green in the picture above (In IRL: EUROGATE and HHLA Container Terminal Burchardkai). Apparently they are already in the game: 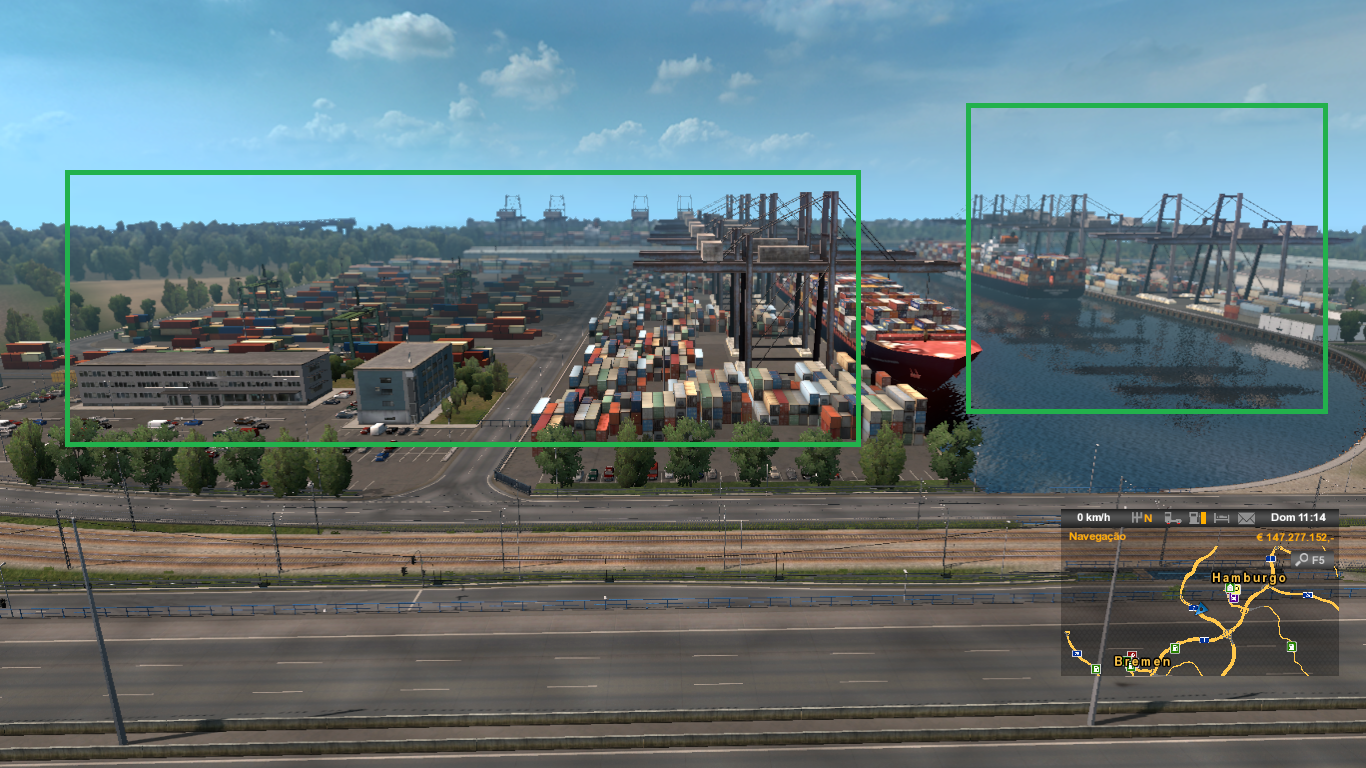 The problem is that it is only as part of the landscape. As in real life we have several container terminals scattered around Hamburg, having 2 or even 3 terminals in the game would be a great addition.

Another suggestion is in relation to the Köhlbrandbrücke bridge. It was a great addition in the first phase of the update of Germany, but just being able to see the bridge and not being able to travel through it is really a pity. 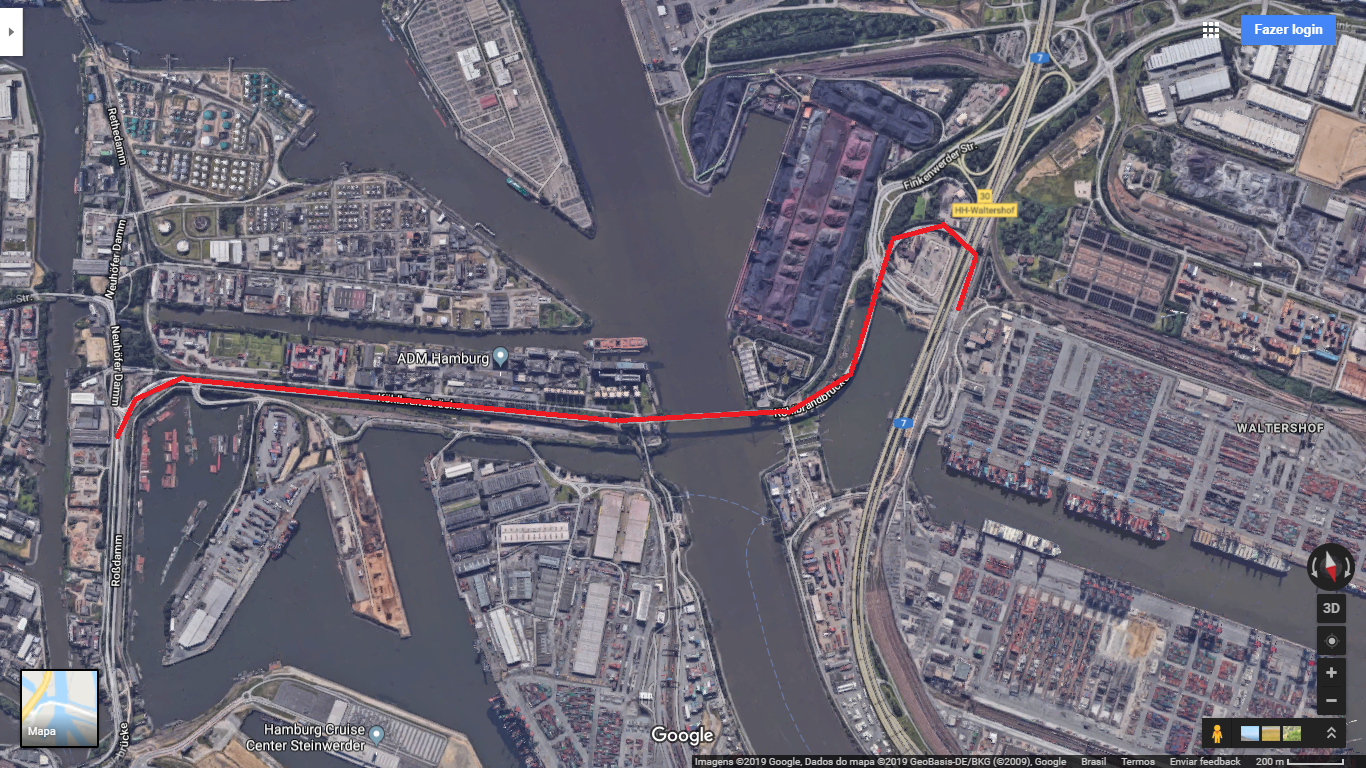 In real life, the bridge leads to several other charging terminals. In addition, there is considerable truck traffic:

In the game we only have part of the bridge, it ends at a certain point with an "empty" and when walking in straight line with the free camera ends in the city of Hamburg:

Having access to terminals near the bridge would also be great: 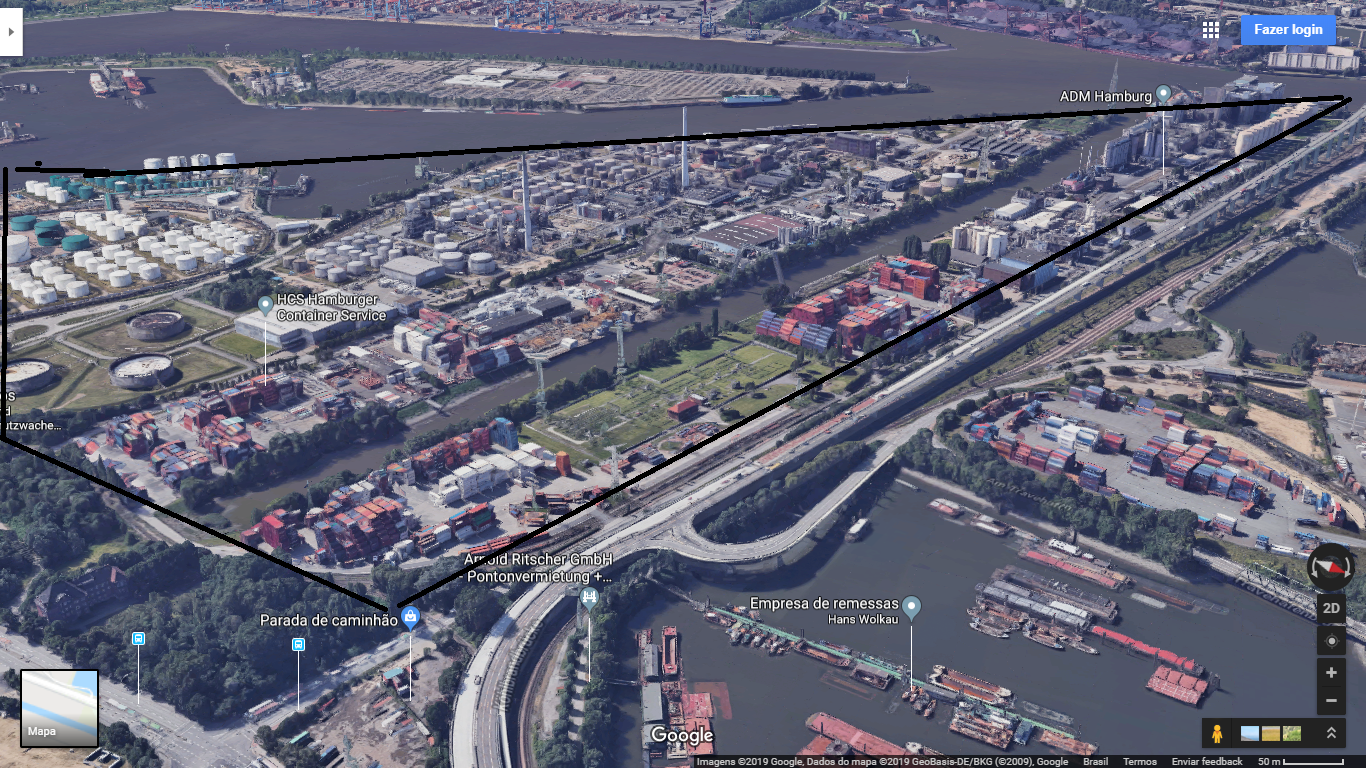 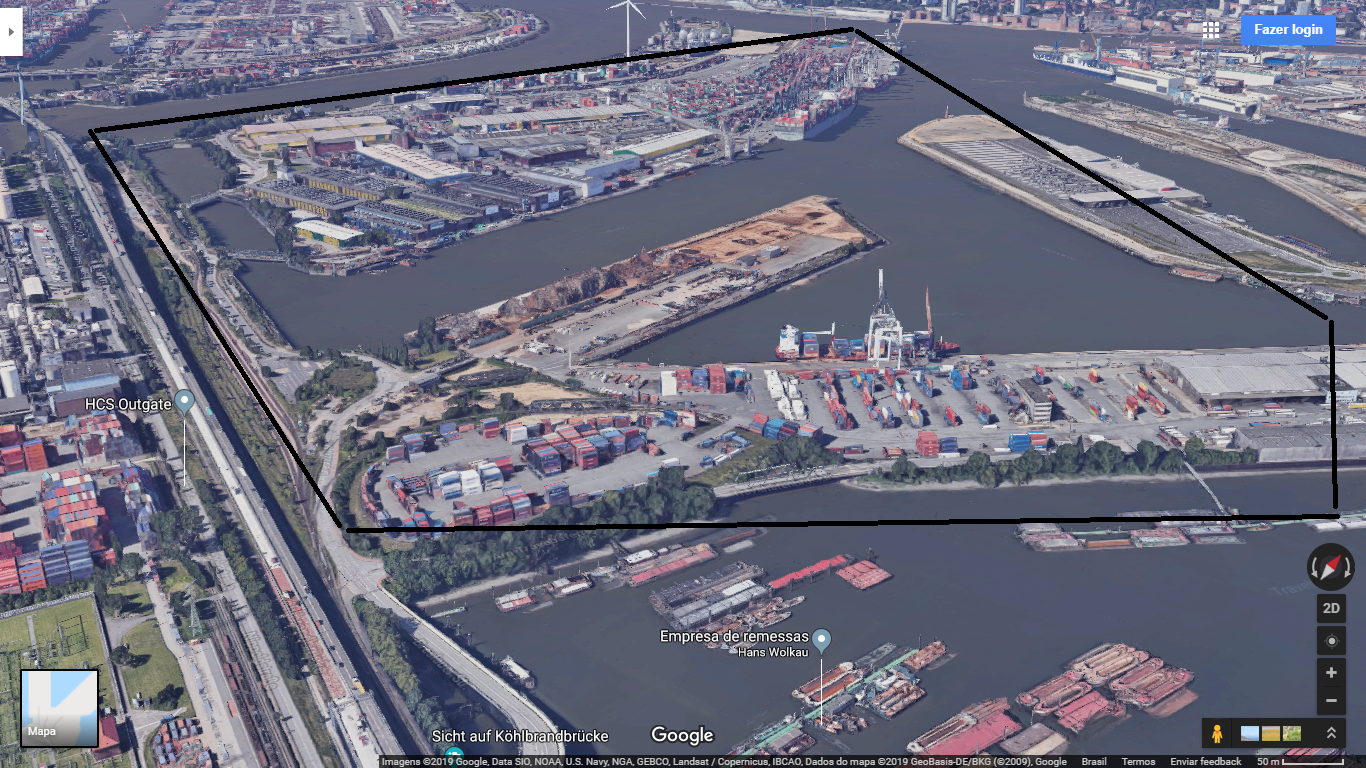 In the game for example we have this terminal/industry with silos:

Judging from the silos, it looks like the ADM terminal in real life:

General Map of Hamburg Port - It is possible to filter the terminals by category (Container / Bulk Cargo / Multipupose-RoRo).
Last edited by Carlos_ on 05 Mar 2019 22:53, edited 9 times in total.
Top

BTW I'm not sure if you use it already, but since there is no Google StreetView in Germany you can alternatively use Mapillary and OpenStreetCam for street level imagery
I talked to Pavel - don't have questions anymore ...

Admin of the Truck Simulator Wiki and translator, as well as part of the FSG 1:1 map team

I've made some brainstorming about areas where I travelled along often. Not everything might be possible because of the map-scale, but first I wrote down everything that occurred to me.

I linked many of the following aspects on a map. So you can get a better overview, where they are located: https://www.google.com/maps/d/edit?mid= ... 000069&z=7

Cities:
Motorways / suggestions for changes at the road network:
Others:
As I said in the beginning these points are only some "wild" ideas. I know about the restrictions because of the scale that may exclude some of the points ^^ When I have new ideas, I write them down here in this thread

Maybe, the Autohof Hamburg Süd, better known as "Autohof Rade" could be a nice little spot. Its famous at truckspotters, because a lot of trucks which drive Holland - Scandinavia rest their.
https://www.google.de/maps/place/Autoho ... d9.8011865

Also the "Emstunnel" at the A28 between Bremen and Groningen could be reworked a little bit. In Reallife, you have a country road which passes it above and goes to Emden. You also have some exites to Leer, Jemgum and Emden. And the Highway Police has their Office next to it. There you will find resting Special Transports at the weekend, because they have some parking spots for trucks.
https://www.google.de/maps/place/Emstun ... d7.4039524

Soo, a few little things from me and my home-region.