Well Hello, time to reactivate this thread a Little bit,nice ideas were coming lately to this thread, but now I'm going to end my travel along A3 in Germany.
(Sorry got sick and had after that, I had much work)

The really interesting junction is now "Kreuz Kaiserberg" (A3/A40) near "Duisburg".
Not only is A40 the most important entry road to "Duisburg", it connects the "Rhein Rhur area" with the Netherlands (actually it is the 2 lane local road ingame north of Duisnurg).
But it also is a rare "spaghetti bowl junction"
https://www.google.de/maps/@51.441623,6 ... !1e3?hl=de
Inbetween the junction many railway bridges cross A3 or A40.

Here I will stop, next is a text about "Duisburg area"
See you soon
Top

Okay, we finally reached the "Kreuz Kaiserberg", a Spaghetti Junction in Germany (really not often to be found)
https://www.google.de/maps/@51.442246,6 ... !1e3?hl=de
Map of the layout
https://de.wikipedia.org/wiki/Autobahnk ... erberg.svg

To enter the City of "Duisburg", we leave A3 here and travel westbound on A40.

From now on A3 is no longer a 6lane Highway, it is now only a 4 lane Highway.
Mostly running through a nice agricultural quite flat area, but here and there you can see big hills, so called "Halden". These are manmade mountains out of the unused earth from mining (Spoil?).
Like this one near the city of "Dinslaken"
https://www.google.de/maps/@51.5772377, ... !1e3?hl=de

At the town of "Hünxe", we have first rest area "Raststätte Hünxe", thenm the actual exit of "Hünxe" and finally we cross the "Wesel Datteln Kanal" and the river Lippe on a bridge.
https://www.google.de/maps/@51.641032,6 ... !1e3?hl=de
And finally leave the greater area of "Rhein Rhur".
Now we drive through a mostly flat and agricultural are until we leave Germany and enter the "Netherlands"
https://www.google.de/maps/@51.8991058, ... !1e3?hl=de
Now the German A3 becomes the A12 in the Netherlands and leads towards Den Haag and the Rotterdam area.

Finally, I made it along A3, that was a long way to go (also it is not the longest highway in Germany....)
See you next time
Top

After doing some quick research around German cities, I have quickly determined that they have a lot of IKEA stores, Hamburg for example, have 3 IKEA stores in real life yet not even a single one in Hamburg of ETS2, then I hope that you will implement IKEA (IKA in-game) stores across Germany, I have been in Germany 3 times in my life and I noticed IKEA stores everywhere, and another, more general request is to implement more complec prefabs of junctions in cities because where I have been in Germany you see everywhere complex ones but in the game we don't even have ones with separate left turn traffic lights, and that's after the rebuild of northern Germany, maybe also using the new crane asset instead of the old one would add realism, and more variaty in companies and some assets in Germany will help demonstrate the scenery in cities and roads better.
Developing France, Denmark and bits of Belgium in EuRoadNet.

Translating ETS2 and ATS into Hebrew.

If there were cities in Germany that I want to see be rebuilt in the future, that'll be Stuttgart and München. I mean, WHY wouldn't they be rebuilt? You'd have to be a madman not to rebuild them.
Top

1st reason: The Frankfurter Kreuz is one of the most important intersection for international traffic around Europe. A huge amount of West <-> East and North <-> South long haul traffic runs through there everyday.

2nd reason: The Frankfurt airport is the biggest airport in Europe in terms of cargo. There are two Cargo Cities here with multiple airline warehouses handling goods from all over the world. Trucks from all around Europe stop here everyday to pick up and deliver airfreight. Also many road feeder services start and end here. Road feeders arrive and depart from/to all major cities, like Luxembourg, Paris, London, Madrid.

3rd reason: The area is a nice landmark, you have the terminal buildings of Terminal 1 and 2, the "Squaire" with the passenger rail connection and the intersection of the taxiways for the aircraft to the northwest runway.

If you consider implementing this and need more informations and details on how it looks around there and how things work here around the airport, feel free to contact me as a "local". Since I see the importance for cargo here everyday, it would be nice to see it in my favourite truck sim.

Best regards and keep up the great work!

[Edit] This is the English website of the airport operator Fraport with lots of info about the Cargo areas. https://www.fraport.com/en/business-par ... kfurt.html
When typing "Frankfurt airport cargo city map" in Google you can also find a detailed overview over both business parks (I can't attach that PDF doc here). As I said, if you need pictures or info about some places, I can help you with explaining or showing you things (within the legal limits of things that I can show of course)

Another thing: I just checked, sadly the Google Street View pictures are incomplete and really old. Since the former air base was removed and preparations are done for terminal 3, a lot changed here. 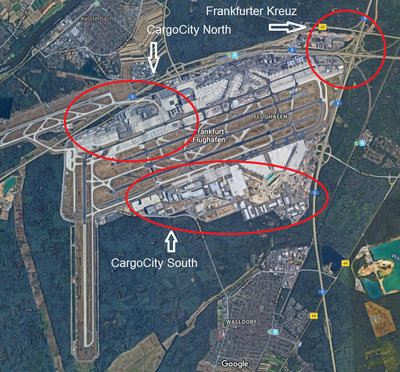 In my opinion it would be more important to have the A7 extended further south instead of an extended A13, A5 or A27 but a longer A7 seems to be planned when having a look on their latest progress map.
Having the rest of A20 in the north would be nice as well.
Top

Hey guys, time to stir the things around here a bit

Here is the question, which landmarks you would want to see in the rest of the germany rebuild?
I noticed some nice tips here, but I would like to have more.
I mean any kind of landmark objects really, factories, statues, historical buildings, even interesting natural phenomena.

The key words are, anything that catches your eye when you drive past it.
You can use the old map as a reference point of where to look, but I guess I don't have to tell you guys that

(also please keep the focus mostly outside of towns and cities)

I would recommend the Allianz Arena at the crossing of A9 and A99 near Munich:
https://www.google.hu/maps/place/Allian ... 11.6246939
https://en.wikipedia.org/wiki/Allianz_Arena

Also, if the minor route between Munich and the A3 (towards Prague) would be changed into the A92, you could include Munich airport:
https://www.google.hu/maps/place/M%C3%B ... 11.7750263
https://en.wikipedia.org/wiki/Munich_Airport
VOTE for your favourite map DLC
The longest delivery in ETS2: Istanbul-Aberdeen
ETS2 map (+ concept map )
ETS3 concept map
Top

By making my Austria-rework map&Topic i put the München area into it because Austria and this part of Germany are traditional ally's and have a strong coorperation, beside that: all main routes goes that way! (Bayern/GER)

MÜNCHEN City can change its look without any big Problems or hard work and be a ➔ Wow!-city... the most Buildings are ingame, only minus they have to be PLACED on their rigt place.
As i created the rework of München's highways, i come on the idea to take that as advantage to create new city area.
On my pic you see existing models of buildings in München compared with city area rework example...only put the building like the numbers on their place and add the Streets...left only to camoflague everything between and add companies like in all cities and we have a realistic looking München. Only 2 buildings missing here are the Allianz-Arena and the Uptown-Tower. 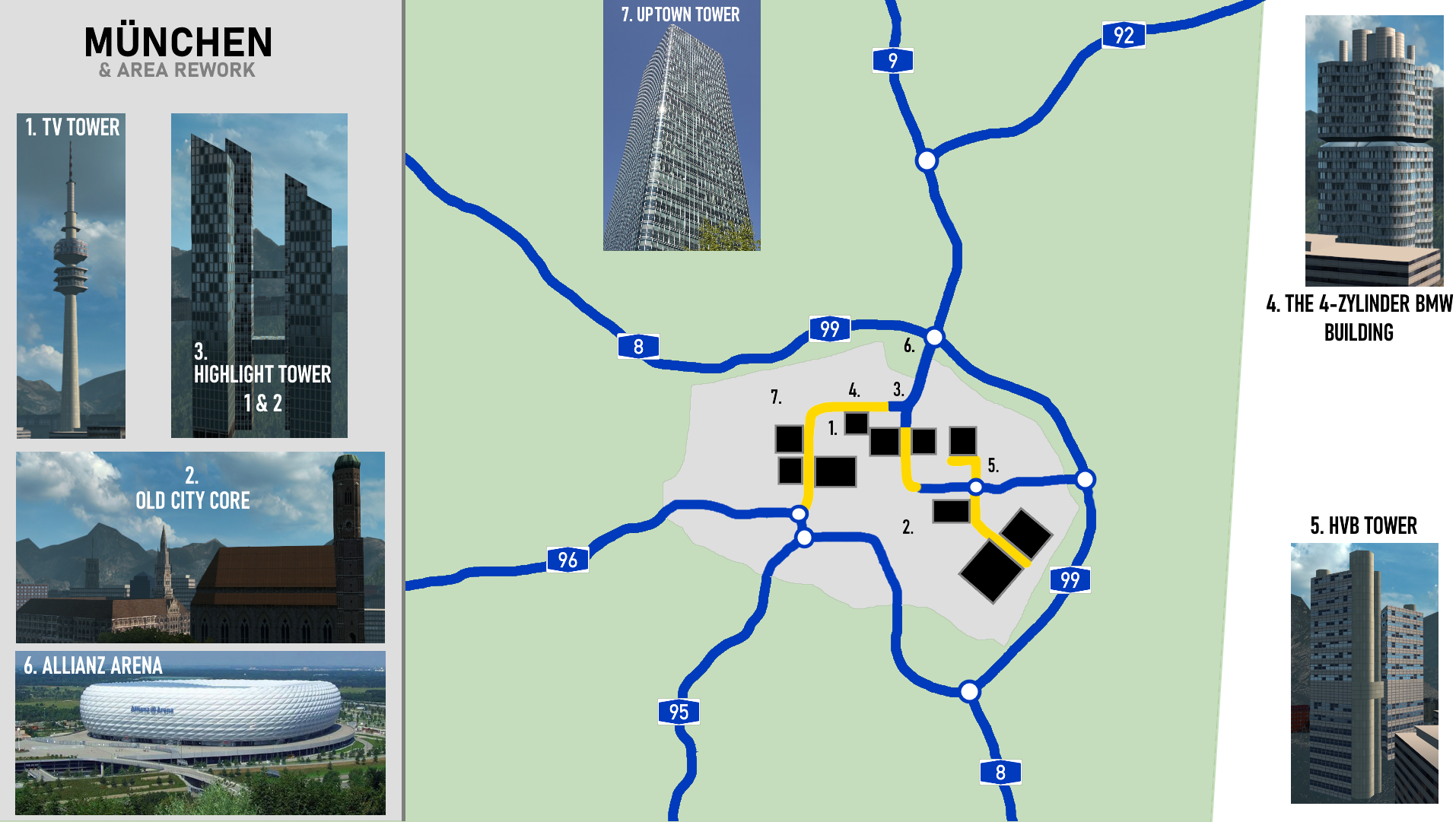 MÜNCHEN SURROUNDING AREA ingame is hilly and closed...verry unrealistic...München area is wide and flat in North,West and East direction, only in South it starts to be hilly and then the Alps in direction Austria...here we need also some corrections... 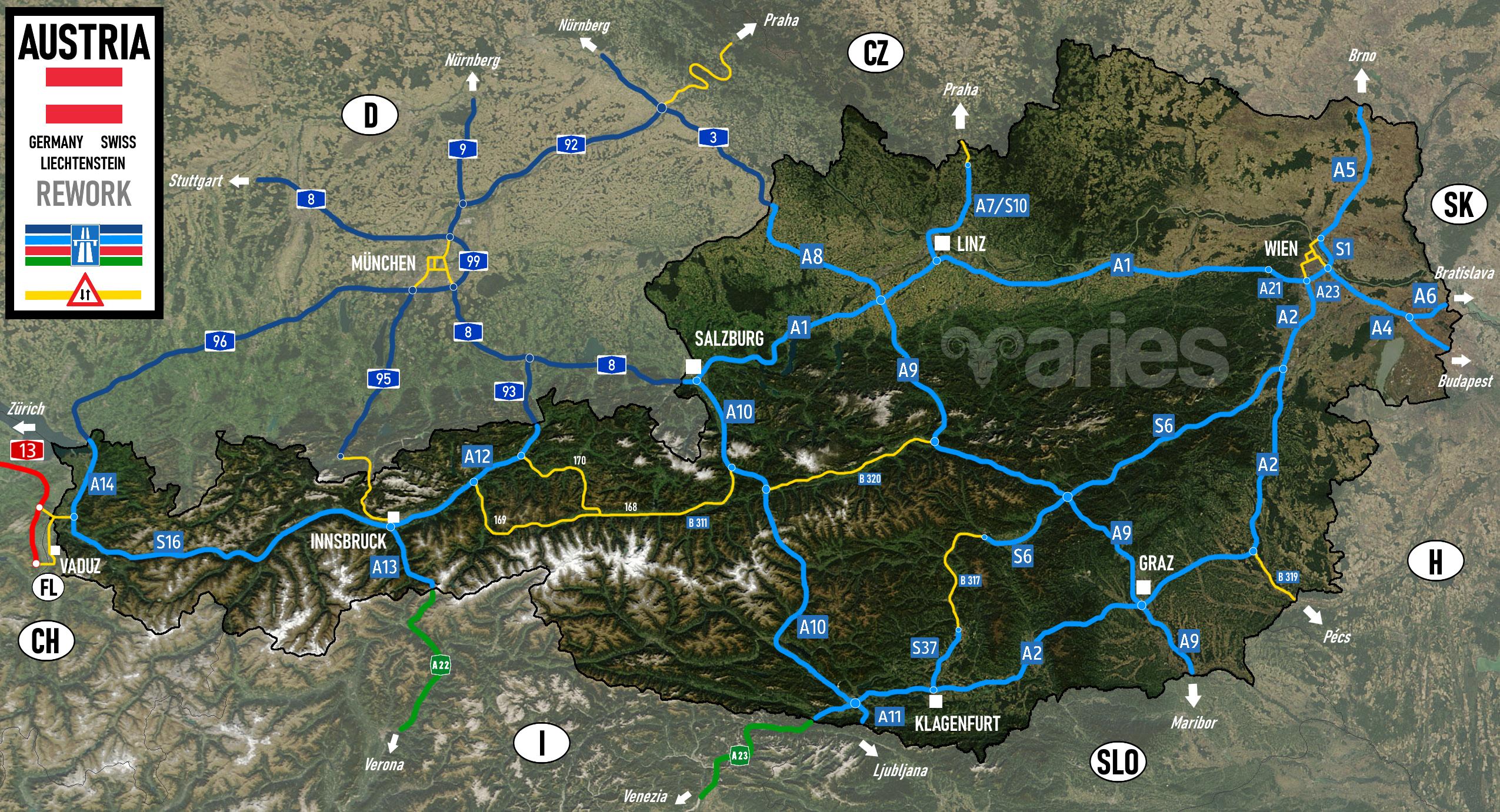 and at least...in direction Salzburg on the A8 there are 2 Points everybody know and they are the "highlight" on the southern part of A8 ➔ Irschenberg (A8 goes Up'n'Down) and ➔ Chiemsee (big lake where A8 pass some meters from coast) 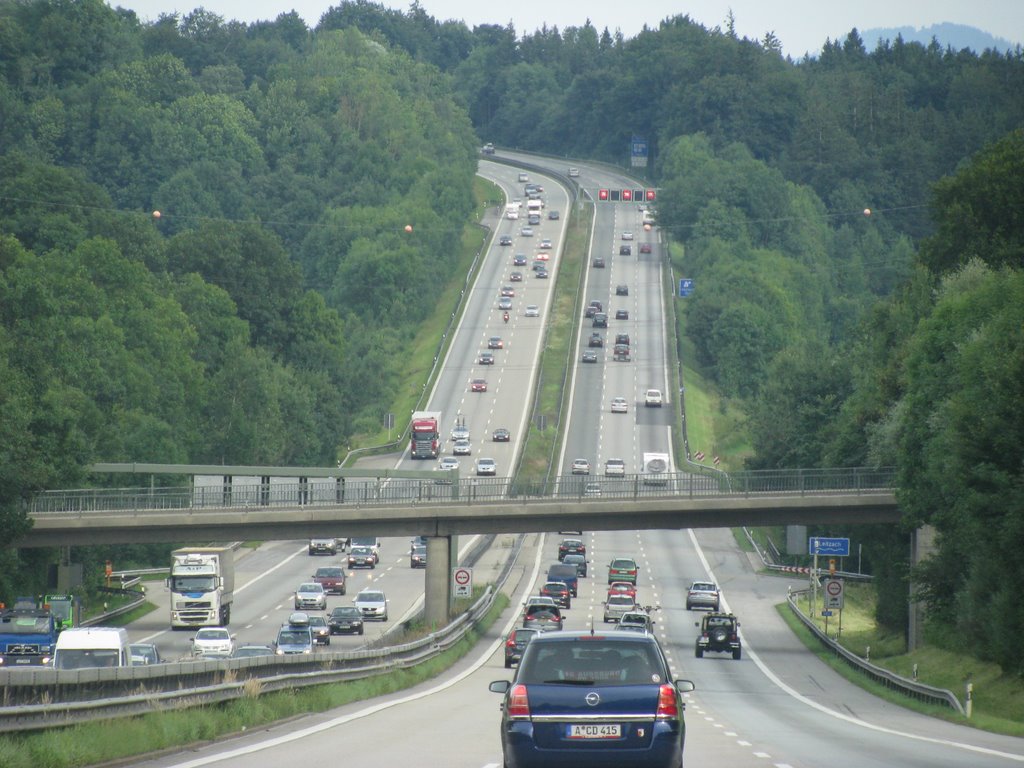