Forum rules
SCS as a company do not wish to have paid mods on this forum. While we understand that not all paid mods use the Intellectual Property of other companies/people, it is very hard to moderate what is and isn't acceptable when money is involved. There are also concerns that it could look unfavorable to potential work partners going forward if SCS allow mods that may potentially use unlicensed branding.
Posting in the Mods forum (ATS and ETS2) is restricted to sharing free-to-the-public mods and providing support for mods. For more details, please check chapters [4] and [5] of Forum Rules.
Post Reply
71 posts 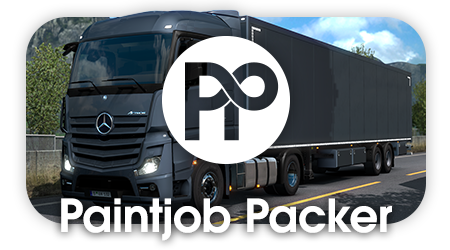 Paintjob Packer is a lightweight mod making tool for Euro Truck Simulator 2 and American Truck Simulator. It allows you to generate simple paintjob mods, with a focus on mods that support multiple vehicles.

Paintjob Packer doesn't make a completed mod from the get-go. Instead, it makes what I call "custom example mods", giving you all the files you need for your mod, but with placeholders standing in for every image/texture. You then go through and replace all the placeholder images with your own to complete the mod. Since you usually have to test and tweak a paintjob many times before it's ready, generating paintjobs this way means you only have to run the program once.

If you'd like an all-in-one mod making program, or you'd like to make metallic paintjobs, paintjobs with changeable colours, or non-paintjob mods, I highly recommend Mods Studio 2.

I made a tutorial video explaining how to make paintjob mods using Paintjob Packer, including generating their files, working with templates and uploading to Steam Workshop. You can watch it by clicking on the thumbnail below: 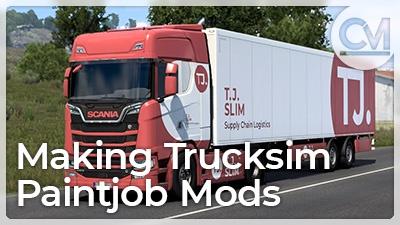 Paintjob Packer requires an image editor that can save DDS files. DDS is a special image format used to save textures for many games, including both Trucksim games. You can use any of the following: 1. Generate base files using Paintjob Packer 2. Replace mod manager files 3. Replace icon 4. Replace vehicle textures
Last edited by Carsmaniac on 07 Apr 2021 12:56, edited 4 times in total.

It's seems cool. But when i try to download this, my antivirus gives alert.
Sorry for my English. Sometimes it can be difficult to understand.
Top

It generates the paintjob packer output folder on the desktop that contains the manifest.sii, mod_manager_description.txt, mod_manager_image.jpg, and the material > ui > accessory folders. The accessory folder contains icon.dds, icon.mat and icon.tobj files. That's where the program hangs with the progress bar full. Ran the .py instead of the compiled .exe for the same result. Win 10, python 3.8.
Tarquinn from r/trucksim.

@mstfcbngl This is a false positive, and unfortunately a known issue with PyInstaller, which is a tool I used to make Paintjob Packer. You can see on VirusTotal most of the AV engines are fine with it, but a few of them detect it as a virus. The program is safe to use, but if you're worried/your AV won't let you run it, you could download the source code and run packer.py directly (you'll need Python 3).

@3MC 1DJ Thank you very much for the full error, and I applaud your troubleshooting!

It turns out this was caused by an issue with single vehicle paintjobs. I included support for them as a last-minute thing (I only ever make packs), and evidently didn't test them enough at all. I've fixed it in version 1.0.1. This should fix it for you too, @SpenceUK.

how do you add in further trailers that are mods,please.
Top

@herbie30 At the moment because Paintjob Packer is a single .exe (so you don't have to install it) you can't add to or change the mods it supports. I could implement a system to add additional mods if you like, but it would only work with the loose file version of the program (where you download the source code and run it with Python 3). The alternative would be to change how the program is packaged, so you download a folder instead of a single file, which I may consider in the future.

In the meanwhile if there are any specific trailer mods you'd like supported let me know and I can add them! Preferably from the SCS Forums or Steam Workshop, and no paid mods.

Hi Carsmaniac
would you be able to add Cistern Menci and kp feldbinder trailer pack?Both these mods i found in the SCS forum.
Many Thanks
Top

I just released a new version featuring support for trailer mods, including both the Menci Cistern and Feldbinder KIP! It also fixes a bug that meant your paintjobs wouldn't show up in-game, so now your mods will actually work!