Forum rules
SCS as a company do not wish to have paid mods on this forum. While we understand that not all paid mods use the Intellectual Property of other companies/people, it is very hard to moderate what is and isn't acceptable when money is involved. There are also concerns that it could look unfavorable to potential work partners going forward if SCS allow mods that may potentially use unlicensed branding.
Posting in the Mods forum (ATS and ETS2) is restricted to sharing free-to-the-public mods and providing support for mods. For more details, please check chapters [4] and [5] of Forum Rules.
Post Reply
49 posts

This is a fantastic tool @Carsmaniac ! The file structure it sets up is so clean and easy to make quick changes. I am just starting to work on paint jobs and this tool is making my life a whole lot easier.
ATS state release order concept map | Road to Moscow 2021 concept map
Western Star 49X & Kenworth K100-E | Lamar, CO & Vancouver, BC
Renault Range T | Poissy, FR
Top

and would it be possible for you to put the BDF Tandem pack from Flemming ?
ETS2 : Promods + RusMap + parisRebuild

Hi, I went to see if the new version is available on your site, with the compatibility of the new truck, Freightliner Cascadia, but there is only version 1.5, the one I own.
I guess you're working on it, even with the whole Covid mess. By the way, everything is fine in your part.

Anyway, thanks for your work. Your program is very useful to me, because unfortunately I don't know the compilation of the various files, strings to insert etc. Thanks to your program, it makes it much easier for me.
Top

I've just released an update with support for the Freightliner Cascadia! Enjoy

Thank you very much! Love using this for my paint jobs.
When in doubt... Ask m1keY!

Thank you very much Mr Carsmaniac, your software is really top of the line and indispensable

I am astonished not to see in the list the chereau trailer of MD Modding ??

This is so awesome! Especially for those who are beginers.

I have a question though, after i did all the steps, i wanted to replace the files generated by your software (D:\Paintjob Packer Output\Red Edge\vehicle\truck\upgrade\paintjob\Red Edge\Scania S), with the files from a skin from base.cfg, named folder cougar_01 for Scania S. Originaly the skin In game is named Golden Edge and has orange lines. I just edited all the dds files with the desired look (from orange to red), but how to put them in my generated folder if they have different names than what your software named them. Also when i tried to archivate with 7zip all the files by selectic what's inside the base folder generated, in game at mod manager, i don't see the picture example Mod_Manager_Image (at least as a test) and neither the description

Left are files from base.cfg and right are the files generated by Paintjob Packer. 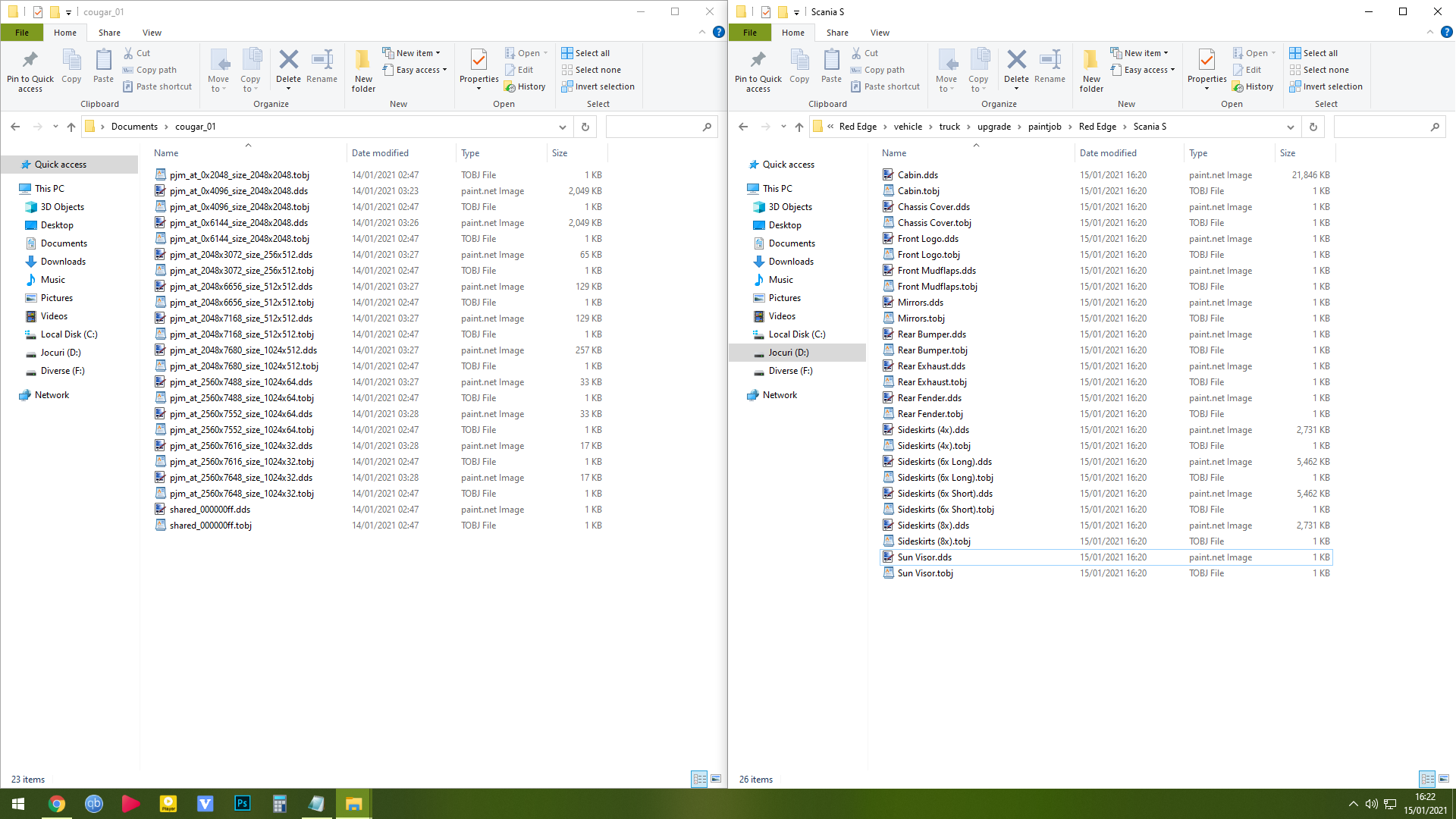