Hi, i am playing ETS2 with ProMods 2.45 on a Windows 10, plugin seems to be installed correctly and i have C++ 64 and 86. But still: "Simulator not yet running".
It worked with previous version of ETS2 and ProMods, but now: no sign of life...
Top

Hello,
it says "simulator is not running", and the game log shows the error shown in the troubleshooting page (loading 'ets2-telemetry' 'C:/Program Files (x86)/Steam/steamapps/common/Euro Truck Simulator 2/bin/win_x64/plugins/ets2-telemetry.dll'
00:00:07.999 : <ERROR> unable to load: 0000007E) but even after installing the visual studio file it still won't work...

did i do something wrong?
cialispascherfr24.com
Top

Dunno about that, but I noticed if you "Esc" out the SDK prompt when you start up the game, the plugin will not work. You have to click "Accept" for it to work. Could it be that, maybe?
Top

Still got issues with 3.0. Crashing the game if you start ets2/ats before the app and the stations are still changing on to the next one despite the current being full signal. Back to 2 i go.
ETS2 Maps: PM 2.4 + RO Ex + YSKRSK + Swedish Islands + RM + SR.
ATS Maps:CD + C2C + USE + VMexEx
GFX:Project Next Gen Classic + New Weather
Misc: ETS2 Local Radio
Audio: Schiit Bifrost + Jotunhiem + Loki EQ + Balanced Sennheiser HD650
Top

That is odd, because the server barely changed between v2 and v3. And regarding

That is intentional. It will always switch to the nearest country (or city in ATS) if the country you were previously is relative to that x further away. Signal strength is independent of that.
You can set the thresholds for when it changes stations in the config, should you wish to change that (higher threshold means it takes longer, setting it to 0 means that it switches as soon as country B is closer than country A).
Top

No im literally driving around Dublin listening to RTE ONE and suddenly it changes to RTE 2FM for example. This happened on ATS with 3.0 as well. it does not happen on V2. This is with my config in custom of 9999 on threshold. Still somewhat crashes on v2 but in a different way which seems to be related to the overlay. Any reason its a problem at 4k or something ?
ETS2 Maps: PM 2.4 + RO Ex + YSKRSK + Swedish Islands + RM + SR.
ATS Maps:CD + C2C + USE + VMexEx
GFX:Project Next Gen Classic + New Weather
Misc: ETS2 Local Radio
Audio: Schiit Bifrost + Jotunhiem + Loki EQ + Balanced Sennheiser HD650
Top

This alternate dll fixed the "simulation not running yet" problem for me.
After Using this new dll, ETS2 show up the "SDK Feature"-Message.

I think, this DLL should be the best one.
Top

There is an alternative dll available that might solve your issues. If v2 works for you (which would be strange, because v2 and v3 are identical except for the link), then just use v2 with the new stations.
You can update the stations yourself by replacing the web folder with the one online. 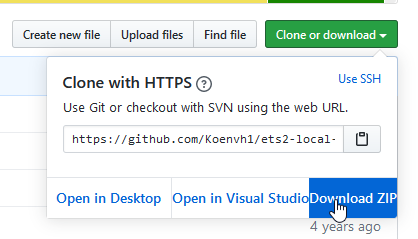 I don't know what causes the crashing. I assume you already made sure your drivers etc. are up to date, especially graphics drivers.
The sudden switching sounds like you have a hotkey for switching to the next station that you assigned to a key/button you also assigned in the game.
So e.g. if H is both your next station button and horn, for example.

Then we can look at solving the radio station changing constantly.

I have not heard this before, so check the things mentioned above.
I can look at it when I have time (and feel like it), but don't expect that to be soon (months rather than days).
This might sound harsh, but I have a lot of things I want to do at the moment, and ETS2 Local Radio is not one of them.
Let alone track some bug that I cannot reproduce and seems to only affect one person so far. It's nothing personal.

If you can point at something that is going wrong specifically (finding out the exact conditions of what causes it to crash), but that will require a lot of effort and time.
I cannot give you a tutorial on how to do it, because if I could give you that, then I could probably solve it too

One important aspect of v3 is that others can update the stations at a rapid pace, without my involvement.
So no, I don't have any update, and I wouldn't expect one anytime soon.
Top

So let me check that with V3 on custom.js this is ok to put in from old v2 config.js ?
var stations_custom = {};