Forum rules
SCS as a company do not wish to have paid mods on this forum. While we understand that not all paid mods use the Intellectual Property of other companies/people, it is very hard to moderate what is and isn't acceptable when money is involved. There are also concerns that it could look unfavorable to potential work partners going forward if SCS allow mods that may potentially use unlicensed branding.
Posting in the Mods forum (ATS and ETS2) is restricted to sharing free-to-the-public mods and providing support for mods. For more details, please check chapters [4] and [5] of Forum Rules.
Post Reply
35 posts

Maybe this dash is not "realistic" but it looks like a "realistic", but I change places of some info and added something like a current speed at main central display.
Also added instant consumption bar and average consumption bar on trip info display with trip travel time and trip average speed.

PS. I got @kriechbaum sound and I want new dash computer for this truck.

So please no request. 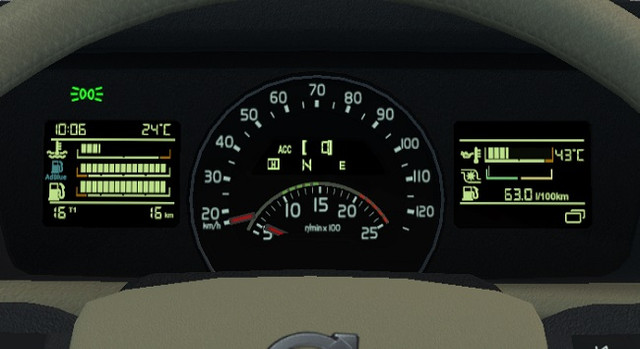 This mod long time was on Eugene Volvo mod
Now mod update to new Volvo font (thanks to Eugene )
Of course I give all permission to Eugene, if he want use this mod on him mod.

I don't want work with this truck dashboard, because it has very bad dashboard UV-map layout of all trucks in game.
Last edited by piva on 07 Jan 2021 16:13, edited 2 times in total.
Top

Ratarder still not removed from animation my SCS

EDIT
Retarder icon - present on "All in One" dashboard.
Top

For ACC, use ID 1250 , it's the memory ID (basically, the "ACC" icon supposed to be there when cruise control is at on, even if it's non active), Also, ideally, it means that you should make the cruise control speed and the bracket surrounding it disappear when it's non-active instead of displaying zero (if i'm not mistaken, you would have to use ID 1240 with ID 1100 as a child according to SCS modding wiki, I think that some truck in ATS are already setted up like that if you want to check)

Source for the icons : Page 54 on this document : http://www.volvogroup.com/SiteCollectio ... ersion.pdf
Top

Why you don't create dashboard computers?

Thanks, for documentation.
BUT SCS create UV-Map for dashboard computer very bad, I told about bug here
Sadly that I can't to do quality dashboard for this truck.

For creating dashboard computer, while I "understand" it, I cannot "Vizualize" it. Which mean that while I can make changes (changing some values, or exchanging an icon for another), I just don't know how to add or move something
Top

rookie_one, thanks for retarder info! Gonna have to fix it on my mod, though i haven't yet figured out where is engine brake icon should be. It seems to me that there shouldn't be one at all
Top

For creating dashboard computer, while I "understand" it, I cannot "Vizualize" it. Which mean that while I can make changes (changing some values, or exchanging an icon for another), I just don't know how to add or move something

Let's try - I give all permission for update this mod. Maybe we will have new one dashboard maker, like Kuba

Ohaha Volvo have own dashboard computer now or I miss something?
Top

You can remove it from animation.sui file, if you want, wait SCS it is waste time when they did work on 5 minute mod update.

Users browsing this forum: No registered users and 20 guests