This is a hardcore realistic physics mod designed for users who are looking for a realism.
Also, the mod changes interior camera behavior. If a truck mod that you use is not on the list follow the tutorial below. In the meantime let me know which truck you want to be adapted and I'll make an adaptation.

So, how to do it? For example I want to adapt MADster's MAN TGX Euro 6... You open the truck mod and follow this path:
man_tgx_euro6_byMADster_v2.1.scs\def\vehicle\truck\man.tgx_euro6\chassis\4x2.sii
You open this .sii file and change default values to these
residual_travel[]: 0.30 # 1st axle
residual_travel[]: 0.10 # 2nd axle
kerb_weight[0]: 5000.1
kerb_weight[1]: 2000.1
For now, the mod is only suitable for 4x2 chassis. In one of the next updates I'll make one more additional mod for 4x2 lowdeck chassis, because if you change residual travel of an axle the whole truck
behaves differently.
Next thing you need to change is trailer stability. Decrease trailer stability all the way to the left, to the minimum.
Braking intensity should be at the middle if you use keyboard, but for the steering wheel users I recommend to try it out and see how it feels, how it's more comfortable for you.
Physical camera movement factor to the maximum.

You are done! That's it!

The working principle:
In the mod file you have "retro_s_Hardcore_Realistic_Physics_[BASE]" file which already contains chassis for default truck and "Chassis Adaptation" folder in which you have all adapted chassis files for 32 trucks listed above. So, you have to place "retro_s_Hardcore_Realistic_Physics_[BASE]" above a truck mods you use and above it place appropriate chassis files for a truck mods you use.
Here's is the example: 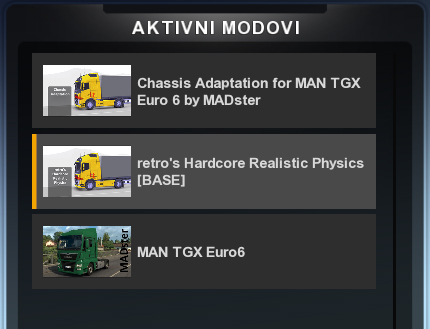 If there is someone willing to make a video about the mod I'd be really thankful. You can share the mod but, please, use the original download link.

Thanks!
***My English is not very good with spelling or something like that***

ETS2 gamer since the first day when it comes out!
My Screenshot topic | My World Of Trucks
Top

You could put a screenshots to the tutorial folder with recommended trailer stability/braking intensity/physical camera movement factor.
Top

I'm glad that someone replied here, because I thought that my project is dead. Every suggestion is welcome!
@Skeleth, you have nothing to do with the sliders in-game. Sliders set value from 0 to 2. If you slide trailer stability all the way to the left you'll get 0 value but you need -2. You can open console and type
g_trailer_stability -2 or you can open config file located in the Documents/Euro Truck Simulator 2/profiles and there you find your profile open that folder and find config file. Then you open config file with text editor and there edit lines for trailer stability braking intensity. Thank you for the suggestion. I really forgot to mention that you need to maximize camera movement because I've edited camera movement with slider moved all the way to the right. Also I forgot to mention that this mod can look weird when the keyboard is used for the steering. In the real life I'm sure you won't pull the steering wheel like a maniac, you will turn slowly without making any sudden movements. Personally, I use the mouse steering... and if you want I can show you how to make proper settings for the mouse steering.

I played for several hours with steering wheel and your mod and everything felt great. The only thing i have changed from tutorial was the trailer stability to -1. -2 was just too shaky, not so realistic. Great job.
Top

Thanks for the feedback! My main goal was to make as realistic suspension and cabin movement as possible and I think I'm close to it. Probably tommorow I will release the new update in which damping_scaling_front_factor, damping_scaling_rear_factor, sway_bar_stiffness_factor is tuned and fixed bug with shaking cabin. Yeah, I know the trailer behaves little weird but I will give my best to tune it in the future. I set trailer stability factor based on the speed you can go through the corners and g_trailer_stability -2 is optimal (I spent a lot of the time in the cabin with my uncle and I know exactly how the trailer behaves. Also I recorded several videos so it will help me as a reference material.). There are also many thing that I can't change. In real life with an empty trailer you can go "really fast" without overturning the trailer but when you are loaded it's a completely different story. In the game it's almost the same if you drive an empty trailer or a loaded trailer, as far as I know, because I tested this mod with Krone Profiliner v1 which has cog_offset 1 for all cargoes. I would leave the trailers how they are now and wait for the new trailer ownership system in which I hope cargoes will be standalone files which will actually dictate the trailer stability. I assume trailers will have own base values, COG and "stability" so every time you load up your trailer you will have the unique overall stability. The game has a lot of flaws... that are hard to correct. Every cargo should have "its own physics", because it isn't the same if you drive steel plates half a meter high (24t) or wooden boards 2.5m high (24t). It's the same weight but the trailer with the steel plates will be more stable. Center of gravity isn't the same. I wanna say that many parameters can influence the physics and it's to much detailed, so for the beginning I used trailer stability only to "simulate" realism in general.
Last edited by retro on 24 Jun 2018 21:47, edited 1 time in total.

Regarding the steering you should be more gentle when steering but this will be improved a bit in the tommorow's update.
Here is the video: https://www.youtube.com/watch?v=d-W545RLxjM
I use mouse steering and it looks pretty smooth steering. Sorry for the low quality and stuttering. Since yesterday I spent the whole night and day to fix this stuttering and finally I solved the problems... partially.

Oh i am very gentle and i always try to drive like i would in real life. I used to drive with mouse steering aswell at the begining. Glad i started using the wheel. You get more control over your truck and security and ofc the feeling from ride is awesome. If you can get a wheel its definetly worth it.
Top

Sir retro, is your mod suitable for keyboard players?
Top