Well, I also don't understand crying, because Paris is not really a Logistics Center, the cities around the French capital have logistics centers. The same is true in the case of Portugal.
Lisbon is just the capital, the logistics activities are concentrated in the region that has the city of; Setúbal, Montijo, Alcochete, the so-called Setúbal peninsula, is where the logistics of Lisbon are concentrated.

Just look at Google Maps, satellite image, it will be very understandable.

SCS Software hit the spot on geography in this respect.

The simulator tries to reproduce the geographic reality even, and it is right.

Lisbon
What Lisbon may have in the future is; bus station, other shopping malls, supermarket, and big clothes stores, and things like that ... delivery areas. It is not a place of great logistics not of garages.
https://www.google.com.br/maps/place/Po ... d-8.224454

Sertã
The city is increasingly developing as a Logistics and Industrial Center, it is right in the center of Portugal, with good road access. So from now on in the future the trend is to consolidate itself as a Logistics Center.
https://www.google.com.br/maps/search/s ... a=!3m1!1e3

Entroncamento
The city is located at the bottom of the Tagus River Valley, with a very good location for road access, both within the territory of Portugal, and to the outside in the case of Spain and the European Union. That is why it concentrates a very significant number of companies including Transport.
https://www.google.com.br/maps/search/s ... a=!3m1!1e3

To understand Portugal's geography a little, it is necessary to do two things: first, divide the country into three bands. a large strip from north to south that covers the entire coastline is the richest part of Portugal and the highest concentration of people ... Lisbon, Porto ... then you have the central strip of Portugal that goes from Chaves in the north to Sertã, Entroncamento and reaches the city of Faro, this long strip is the central part of Portugal, where important cities that are developing in the logistics sector are concentrated.

The last strip of north-south corridor in the Fronteira area of ​​Portugal and has a slightly weaker development and some economic relations with Spain, is where we will find Bragança for example.
The second movement to understand the geography of Portugal is to make a regionalization through the Valleys of the great rivers; So you have: Minho, Douro, Tejo ... and so on. So it is possible to visualize the main city in the economy, and also the logistics city, this is how things work.
Last edited by plinio.lisboa.br on 14 Apr 2021 19:43, edited 1 time in total.
Top

Quark wrote: ↑
14 Apr 2021 18:40
The garage in Paris is actually also not in Paris but in Poissy so no, Lisbon is certainly not an exception and in the case of Paris no fuss was made about it so why here?

Paris had a city center garage, and lost it with rebuild in 1.26.
I haven't drive much around Paris since the rebuild, but you're right, Lisbon is not an exception.
Now let me just drive to Évora for repairs and then drive back to Lisbon, so I can take this job at the marina (trip distance 302km, trip time 4h 53m, 3 tolls). It's fine.

plinio.lisboa.br wrote: ↑
14 Apr 2021 19:22
Well, I also don't understand crying, because Paris is not really a Logistics Center, the cities around the French capital have logistics centers. The same is true in the case of Portugal.
Lisbon is just the capital, the logistics activities are concentrated in the region that has the city of; Setúbal, Montijo, Alcochete, the so-called Setúbal peninsula, is where the logistics of Lisbon are concentrated.

Just look at Google Maps, satellite image, it will be very understandable.

SCS Software hit the spot on geography in this respect.

The simulator tries to reproduce the geographic reality even, and it is right.

"Considered an important link between the Mediterranean and Northern Europe and as a hub for international trade between Europe, America and Africa, the Port of Lisbon has maintained its national leadership in the market of agri-bulk for some years now.
Port activities are carried out on both banks of the river. The handling of containerised cargo, Roll-on/Roll-off and most break-bulk cargo is concentrated on the North bank. On the south bank there are several terminals dedicated to liquid and solid bulk cargo".

In Lisbon (north bank) there are only 8 (eight!!!) Container Terminals.
Are you serious saying that Sertã is a bigger logistics center?

Re: Dealerships and workshops near Lisbon

This question of '' truck stop '' and machine shop is another story. Lisbon is not a Logistics Center, in the case of "garage ''.

Mechanic Workshop in the city of Lisbon for trucks, it does not exist, just in a small city close to Lisbon, the position is suitable for the road configuration created.

Alverca do Ribatejo, it is precisely in this complex of accesses that the A9 route allows to reach the dealership and mechanic of the Mercedes-Benz Trucks, in the city of Sintra.
Last edited by plinio.lisboa.br on 14 Apr 2021 21:59, edited 9 times in total.
Top

hugo206 wrote: ↑
14 Apr 2021 16:29
In my region I see a failure, when you come from Gijon towards Santander, the logical thing is to use the A67 highway from torrelavega to Santander and not go to Solares they have done on the map. also the map allows it. It is not a big mistake but to those of us from here it seems strange

I just delivered in Mercasevilla (Cesta yard in Sevilla) and noticed there was an scenery truck parked there with the trailer open doors as being unloaded.

Mechanic Workshop in the city of Lisbon for trucks, it does not exist, just in a small city close to Lisbon, the position is suitable for the road configuration created.

I appreciate your effort, I really do.
Do you understand that all linked dealerships are within less than 40km from Lisbon city center?

I don't want it to be google maps, I understand it's a game that tries to recreate some areas and it does a great job. Driving in Lisbon, Porto, Barcelona, Seville, Setúbal, Coimbra are all fine. You can imagine that you're driving there. I haven't drove IRL in many other European cities, but I can imagine that at least it seems like we're driving there. That's fine!

Lisbon has all truck brands dealerships within 40km. I don't want to have 6 Lisbon dealerships ingame. It's the same across every city. That's fine!

But I can complain about the laziness of Iberia. Again, it lack garages, repairs and rest stops.
Most cities, in ETS2, have repairs and rests. Almost every city with garage has also repairs and rests, and something usual in this game, is not true anymore in Iberia. And I think it sucks.
What's the point of driving 302km to repair before picking up a job? Does it make the game better? It adds realism? Is it a new design philosophy?

And if its a big one and has not a rest stop is not lazyness, it's a bug. Don't waste time discussing it here, go to the bug sub-forum and report it. As easy as that.

And as you like to have everything on every city; I always wanted to had to plan better my trips. Even if IRL all the cities we can visit are big enough to have everything, the game becomes much more interesting if one can't find everything anywhere. SCS is not going to please always everybody.

is there anyone else having this bug with this sign in Granada? maybe it was already reported? I can´t report it since I am using mods, if someone could confirm it on a vanilla profile it would be great: 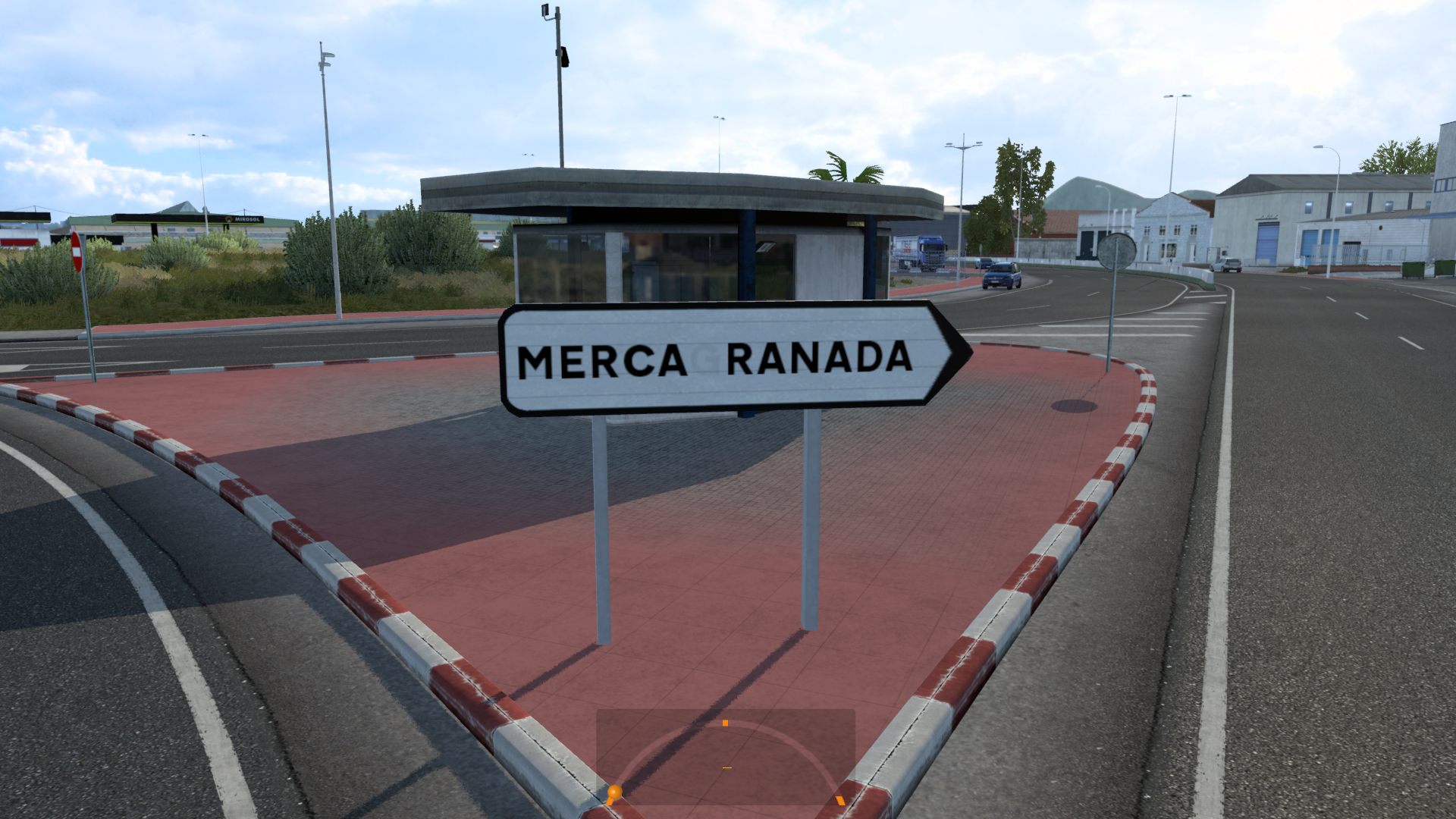