Lisbon has all truck brands dealerships within 40km. I don't want to have 6 Lisbon dealerships ingame. It's the same across every city. That's fine!


It could be worse, you could be in Leiria which has six truck brands dealerships in a radius of 5km from the city's center and a MAN dealer 35km south at Turquel. (holy IC2!)
Proud student of Games and Multimedia in the Polytechnic of Leiria - the Portuguese capital of game development
(and still hopeful the city will feature in the game with a garage someday)
Top

Re: Rest areas in Lisbon and proximity.

These are rest areas for truckers that are visible on Google Maps. Some are certainly private, related to ports.
Only one of them is actually on the highway and en route to Lisbon, it is an absolutely simple stop.

About the bases. Madrid's base is in a different city (Getafe). I can only assume that most international drivers do not enter Madrid but load & unload in the belt cities like Getafe.
Last edited by Esproquet on 14 Apr 2021 22:31, edited 1 time in total.
IBERIA screenshots interactive map: https://maphub.net/Esproquet/ets2-iberia
Top

This is "signs on the road in Colorado" all over again

I know, although the distance is bigger to repairs 141km vs 115km, going repairs and then going back to Marina is closer. (trip distance 205km, trip time 3h 19m, and just 1 toll)
It's better, not by much but it's better.
Top

They're working with limited space and resources. There are only so many prefabs they can squeeze into any given area without things becoming too cluttered and possibly adversely affecting performance.

Repair shops were always a stupid gimmick. Their functionality should be added to and wherever possible rolled into dealerships and garages.
Last edited by mackintosh on 14 Apr 2021 23:13, edited 1 time in total.
Top

Had a weird accident (bug?) today in Bilbao. On my way to pick up some cargo, going steady 80 km/h -BANG!

I went up in the air, spinning around. But just before that happened i got a quick glimpse of something white/red coming down like a flash. Anyway, I managed to land on the wheels on the opposite directed highway, strangely enough correctly in the traffic direction.

What actually happened was that that road barrier/beam flipped down on my truck just as I passed it which sent my combo to the sky. After repairing my rig (119.000€

) I went back the same way trying to replicate the thing, but nothing to report this time.

I have a modded profile so I can't make a bug report in the bug section, but I post the info here anyway, if someone else encounter this

Coordinates are from where I landed, the blue arrow on the map. Red arrow on map is travelling direction. 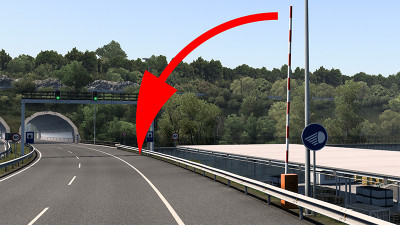 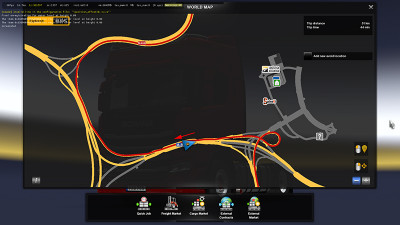 And if its a big one and has not a rest stop is not lazyness, it's a bug. Don't waste time discussing it here, go to the bug sub-forum and report it. As easy as that.

And as you like to have everything on every city; I always wanted to had to plan better my trips. Even if IRL all the cities we can visit are big enough to have everything, the game becomes much more interesting if one can't find everything anywhere. SCS is not going to please always everybody.

You're right about small dealerships, they don't have repairs. Usually there's a repair across the street or in the same block as the dealership. It was the norm everywhere, except Iberia.

I play with fatigue on to add realism and I think it gets more interesting, as I also park manually 90% of time.
When SCS cuts the repair and rests, and puts dumpsters and trailers in the way of parking (can you imagine a logistics center with badly parked trailers?), it's a design decision. I don't like it.
It pushes players to auto park, and to no fatigue. Nothing against who does it, I just don't like being pushed that way.

Overall it's what I think about Iberia, you enjoy at first (cool atmosphere and you feel like driving in Portuguese or Spanish highways) and that's it. Then, gets boring because there's no depth, no secondary roads, not much driving around the countryside, like France or Italy, and then it gets annoying and frustrating when speed limits are wrong and you also don't have the "luxury" of repairs and rest stops everywhere like all other content.
I mean, do you avoid Scandinavia or Going East, because they have too much repairs and rest stops? Does that make those zones less interesting? Certainly not.

But hey, I'm just venting to the air my frustration, as a Portuguese player who, sadly, rates Iberia bellow Scandinavia, Going East, France, Italy and Baltic. I haven't played Black Sea yet, so no opinion.

And we are all on the same side, we all want this amazing game to get even better.
Top

For me, I have been playing ETS 2 since the first day of launch and I have played ETS and all the games in the 18 series wos each DLC that SCS Software releases is better than the previous one, thanks for your amazing work.

Sorry, I use google translator.
Top

In spite of what some people may say, and I don't mean to dismiss their opinions in any way - they are valid in their own right - Iberia is the best ETS2 release bar none. That said, we're not blind to its shortcomings. You can both enjoy and be critical of something. I love Iberia for many a reason. I'm also infuriated by Iberia and some design decisions. It's not that SCS isn't appreciated (at the end of the day, money talks, and Iberia appears to be selling exceptionally well), it's just that we're much more likely to voice concern than we are to shower praise. Human nature, I guess.
Top
Post Reply
5871 posts