2 weeks withoug a blog, I gotta say I envy a bit Colorado fans.

Talking a bit more about the water hardness in Spain, Almería, Valencia & Barcelona have the hardest of them all. This map is an estimate, it may vary from year to year. 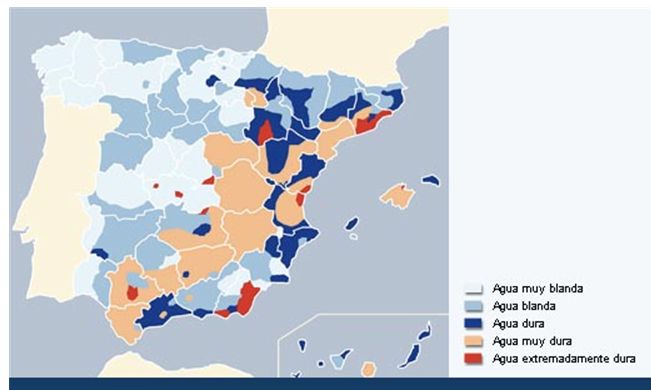 And about the aquifers, they are under severe stress, many swampy areas are drying out, especially in Doñana (southwest of Andalucía) and the Tablas de Daimiel (in western Castilla-La Mancha) because of extensive use of agriculture and farming. Farms near Doñana (in Huelva) are the biggest red fruits producers in Europe and the biggest red fruits exporters of the world, strawberries, redberries, blueberries... if you live in the EU, you'll probably eat them if you buy them at big supermarkets. On the other hand, in Castilla they are creating again and again new pig farms instead of using traditional crops (like lentils) because they are more profitable even though they need much more water... In the southeast the problem is different. Mar Menor farms take their water from transfer canals (Segura river and Tajo (Tagus) river), in order to satisfy a greater production many farmers use fertilizers like crazy so they can produce more and faster... the result is that Campo de Cartagena aquifer is full of plant nutrients that end up in Mar Menor, proliferating algae and bacteria that neutralize oxygen.

Thankfully, after COVID break, it seems that Mar Menor is having more life after last year crisis, from the middle of the 2010s it started to look ugly even though many cities make their earnings from tourism. From 2015, many farmers are taking up initiatives to adapt their fertilizers to nitrogen-neutral ones and other techniques way more respectful to nature. Still, there's a long way to go for a more eco-friendly agriculture with less C02 emissions and aquifer contamination.

It's nothing unusual for October.

It happened with both RttBS and BtBS DCL's in October, only 1 or 2 blog posts for those DLC's in the whole October, but then blog posts about them ramped up in November.

But I feel what you are saying, hoping for Iberia blog post this week, fingers crossed

True, there are not many articles for the ETS2 DLC in October. There will be more articles for Colorado as its release is near (early November if we follow the logic

), after if possible we can have a gameplay in mid-November

I also hope an update of the beta with Iberia grey on the map, it’s 8 years I’ve been waiting for this moment

IBERIA and PORTUGAL are coming in ETS2 !

My concern is that many ideas and suggestion could be ignored.

It makes also for forum users lots of work for researches.

There's a saying that goes,"bread for today, hunger for tomorrow". That happens when there's short-sighted people running businesses and governments.

Kirmes truck, did you tried posting in the research tip thread?
Top

If you are familiar with the region at Algeciras and Gibraltar, what i asume, can you help assisting about companies and other interesting informations?

For me the area is becoming very interesting as you have different companies in the area.

The small ports which i have mentioned are for certain
branches.

May be you can also point out which ports are for yachts.

I only found Alcaidesa Marina near Gibraltar.

Yes it would be really amazing.
Between Gibraltar and Tarifa the moroccan Coast should be considered.
As i wrote the port of Tanger Med1, Tanger Med2, Tanger Med Ro-Ro/Ferry area, are visible. Also during the night because of the port illumination.

The mountains and coasts are also very nice.
Check my post about Jebel Musa/Mount Moses and the photos.

The strait of Gibraltar is a very dense ship highway.
You can see that on the maritime tracking website