by Shiva
dahaka, I wish for a few more roads to that DLC

I almost wish I could take a pause/sleep and then come back when Iberia releases. Almost.

by daniminho
I was making some analysis to the screens of the blog's last post about the Car Industry and I thik I was able to identify two Car Factories and one Seaport. I made some comparing with google maps and I also know some places personally. (Sorry for the Portuguese subtitles, but with the rectangles you can understand what I wanted to highlight).

I think that the factory we see with the Ladoga signs it's the Renault factory in Valladolid (Spain), the main entrance has a roundabout and a train passage like we can see in the screen where that Renault T Range appears, besides that the Ladoga signs are in the exact same place as the Renault ones in real life. 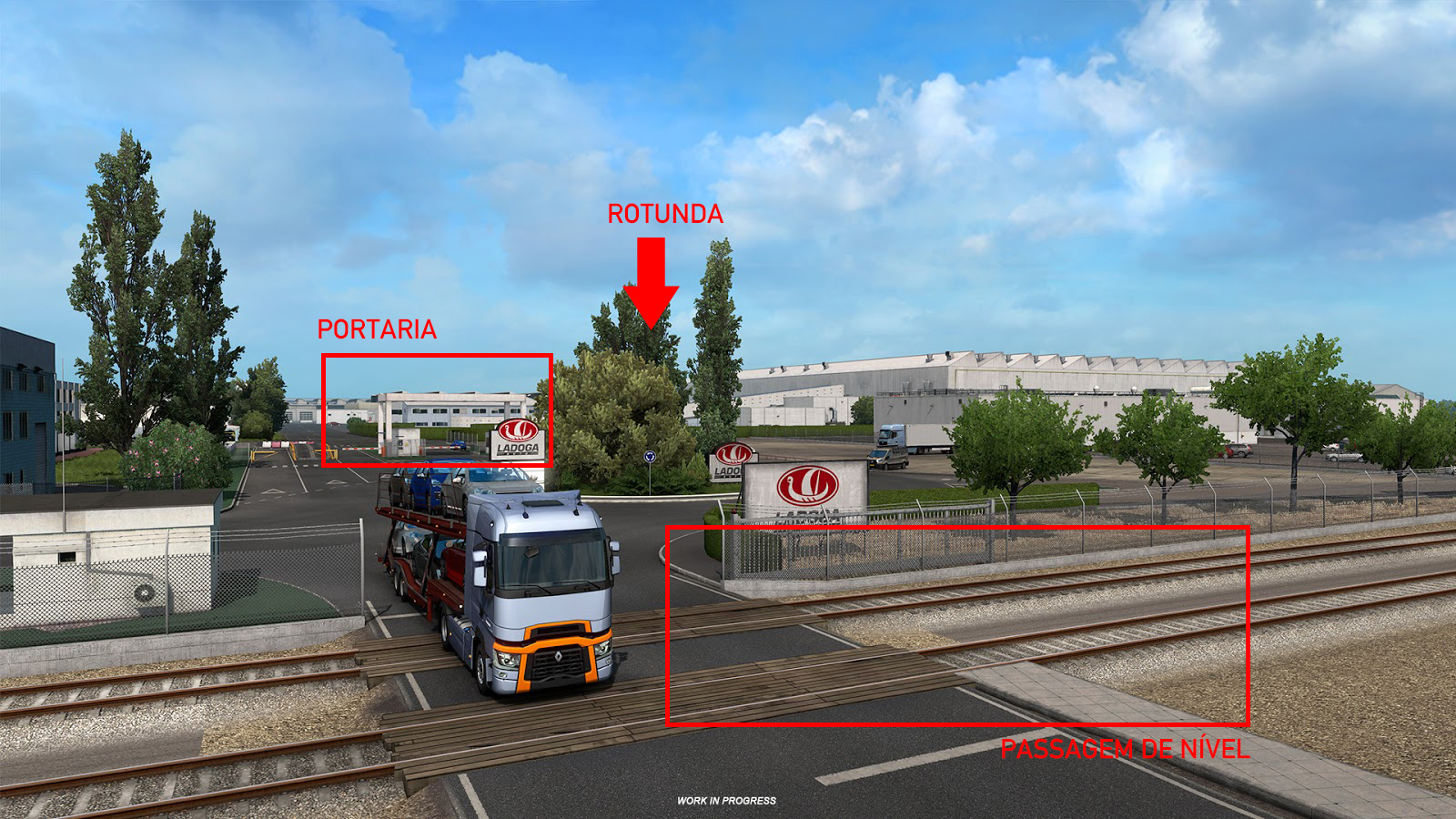 The other one that has no signs looks like the Ford factory in Almussafes (Spain), the main entrance looks the same and we have an highway (AP7) passing just by the side of the factory. 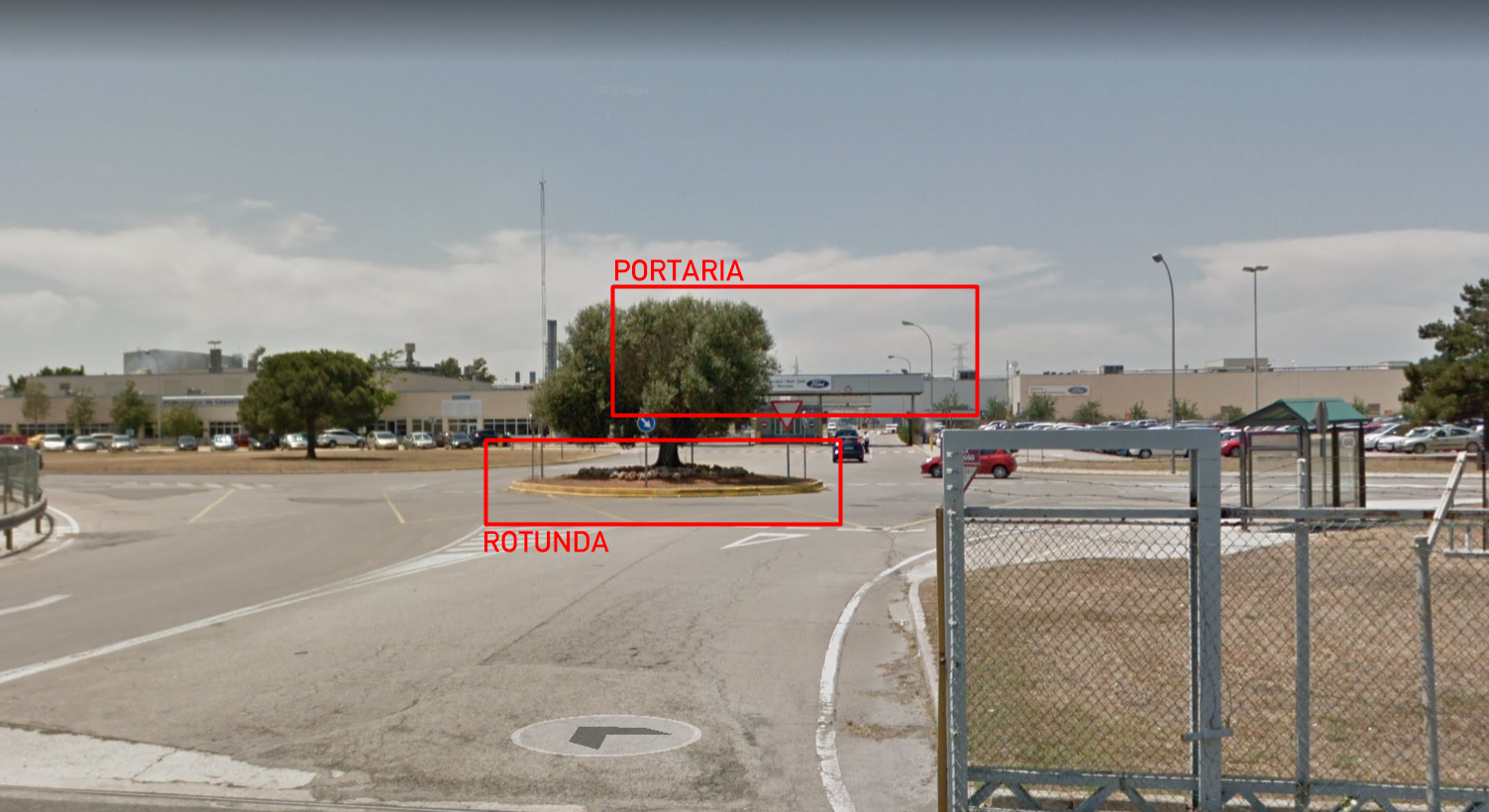 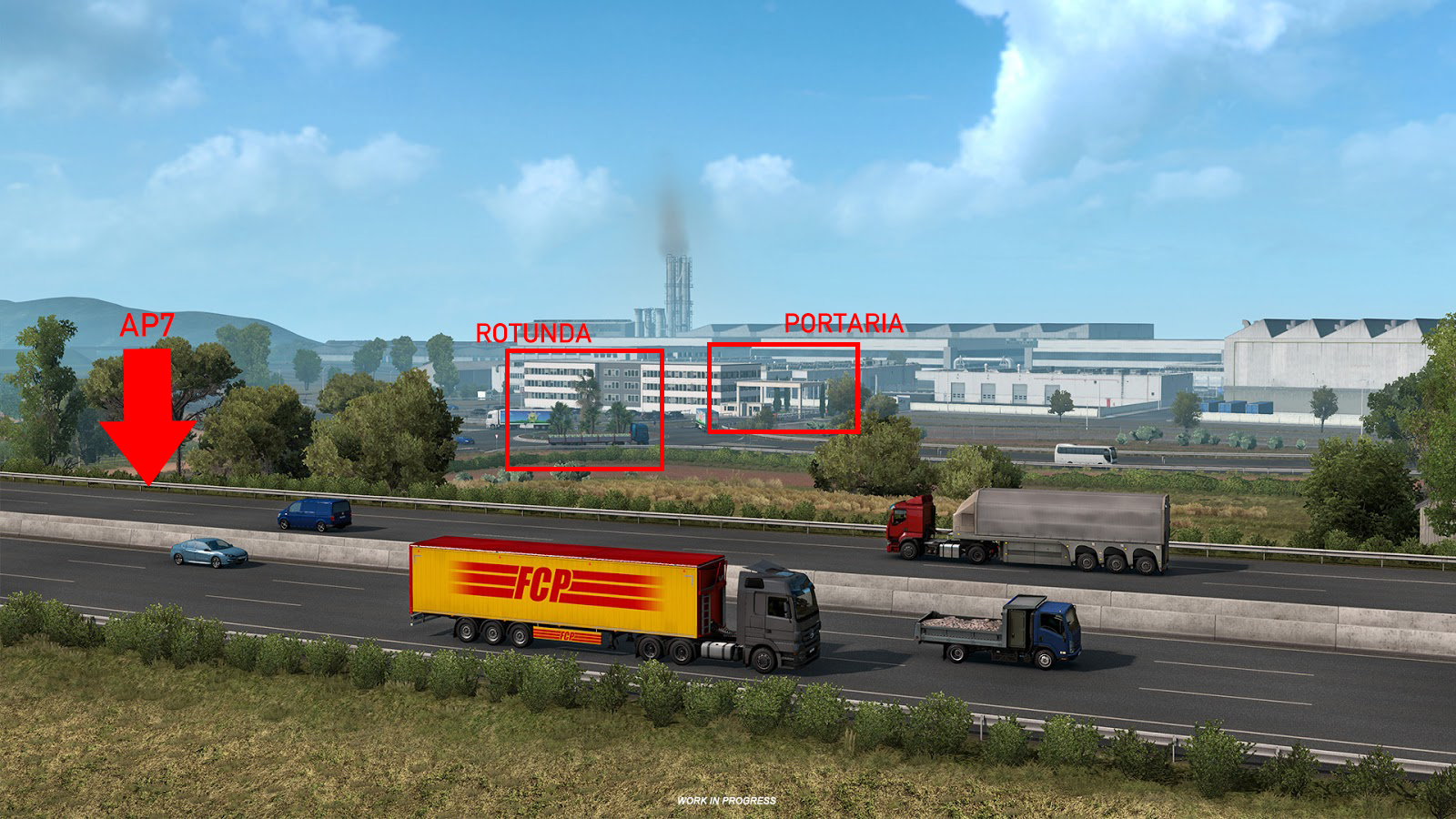 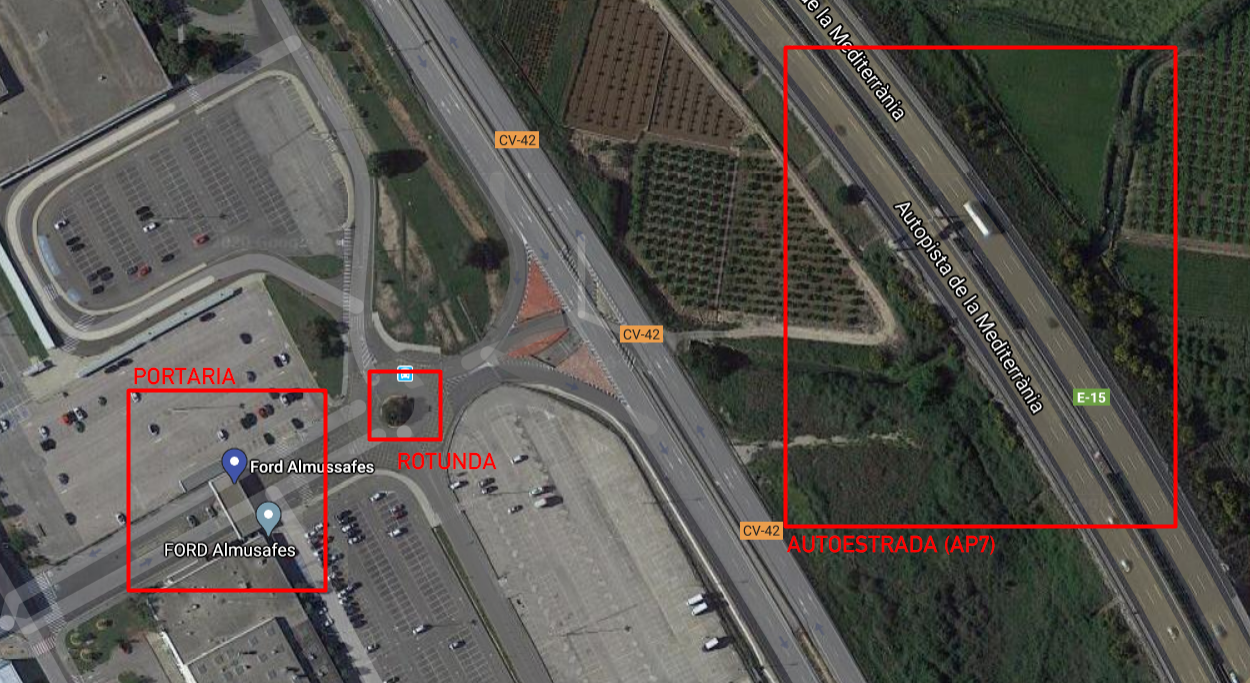 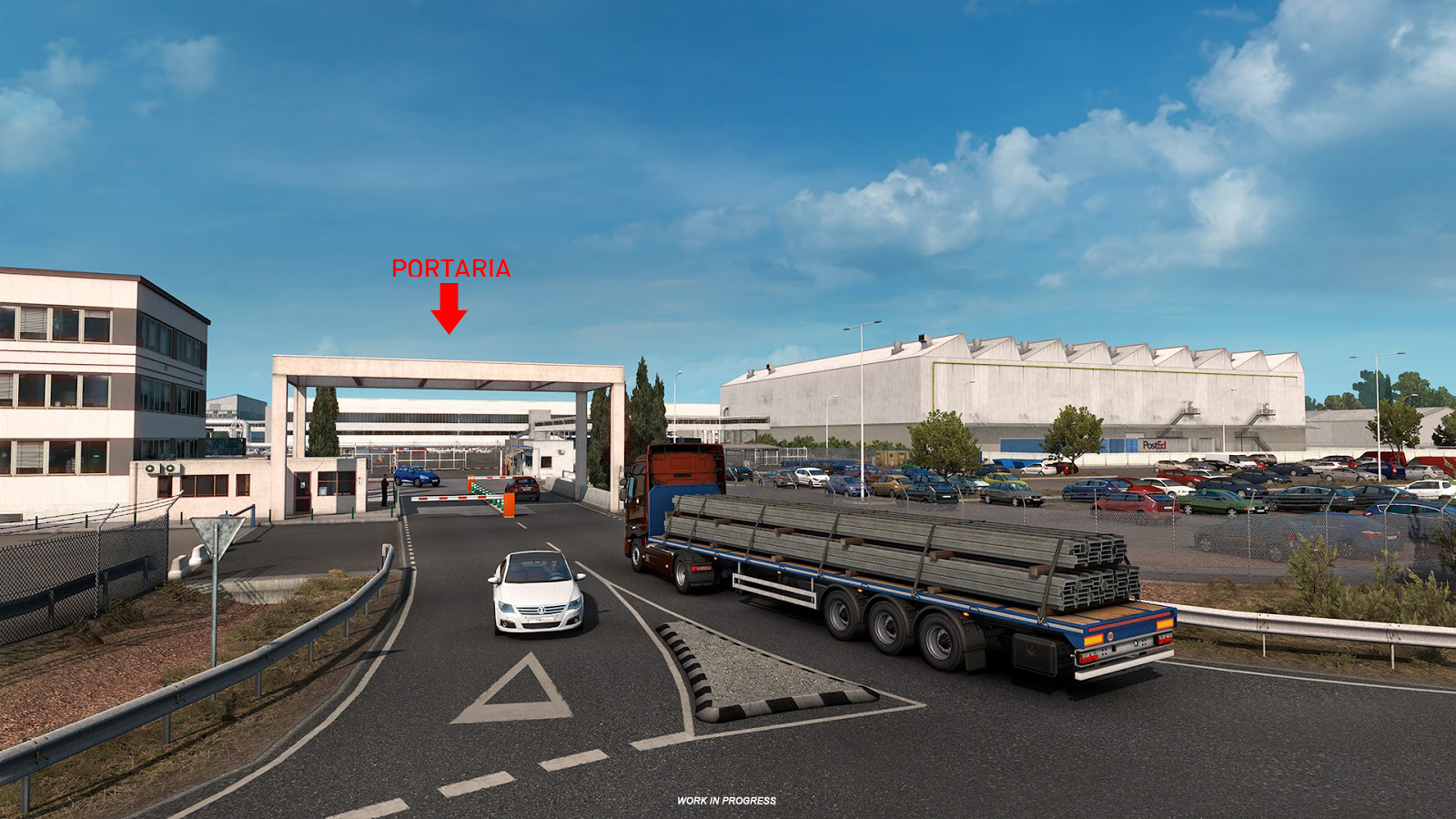 One of the Seaports I think I could identify was the Vigo (Spain) one. In real life it has those marks in the ground in the loading zone, we can see it in the screen where MAN shows up with the car loader. And if you look closely to the horizon, you see some buildings and one lighthouse, It looks for me a match to the real life landscape. 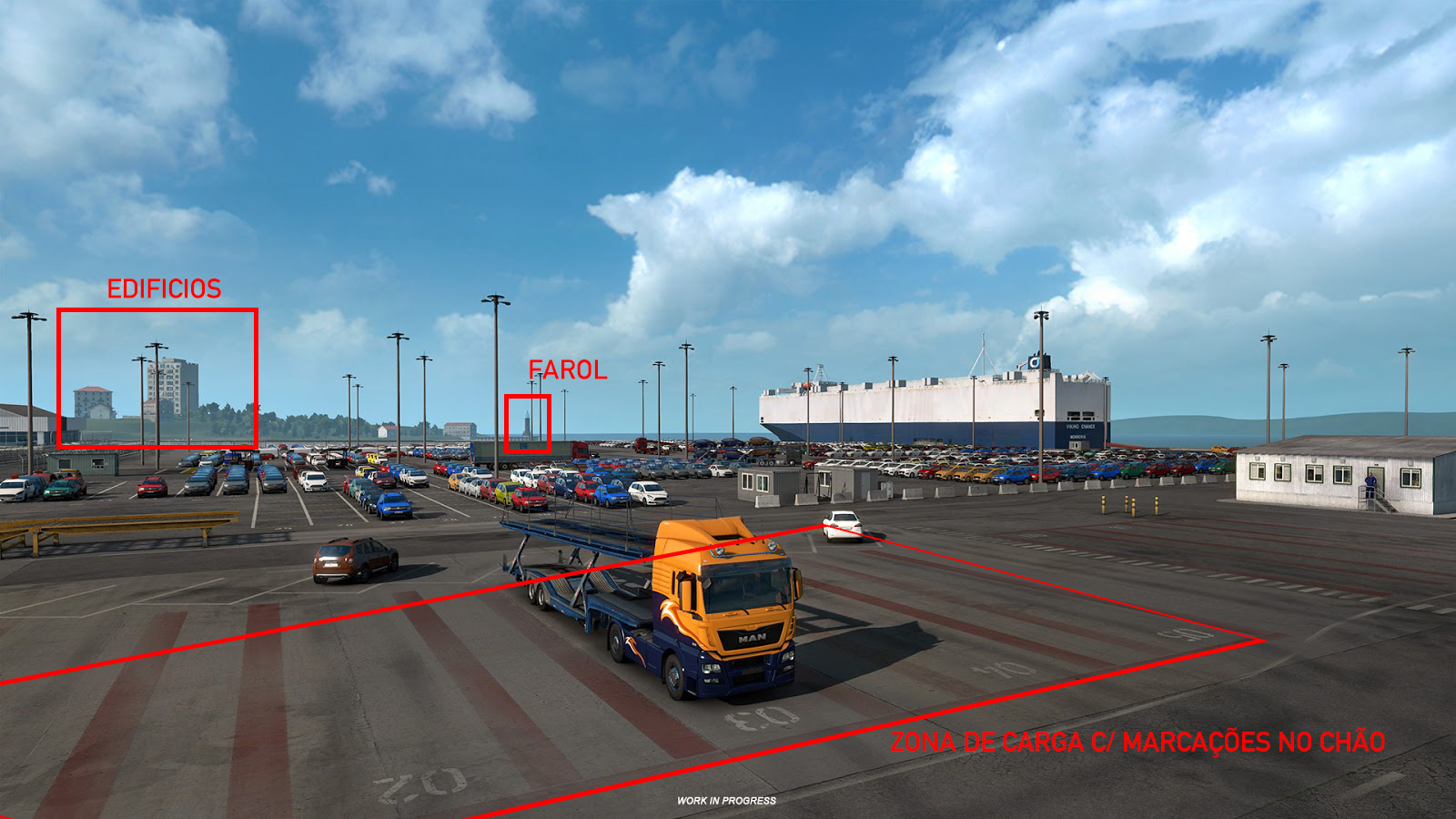 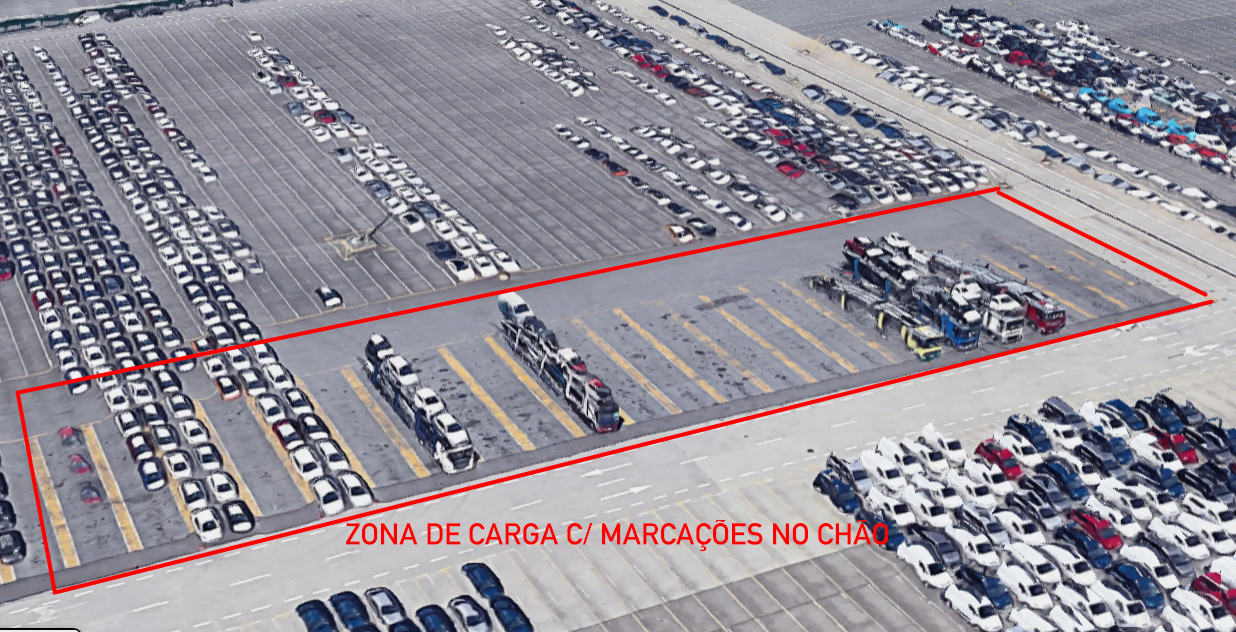 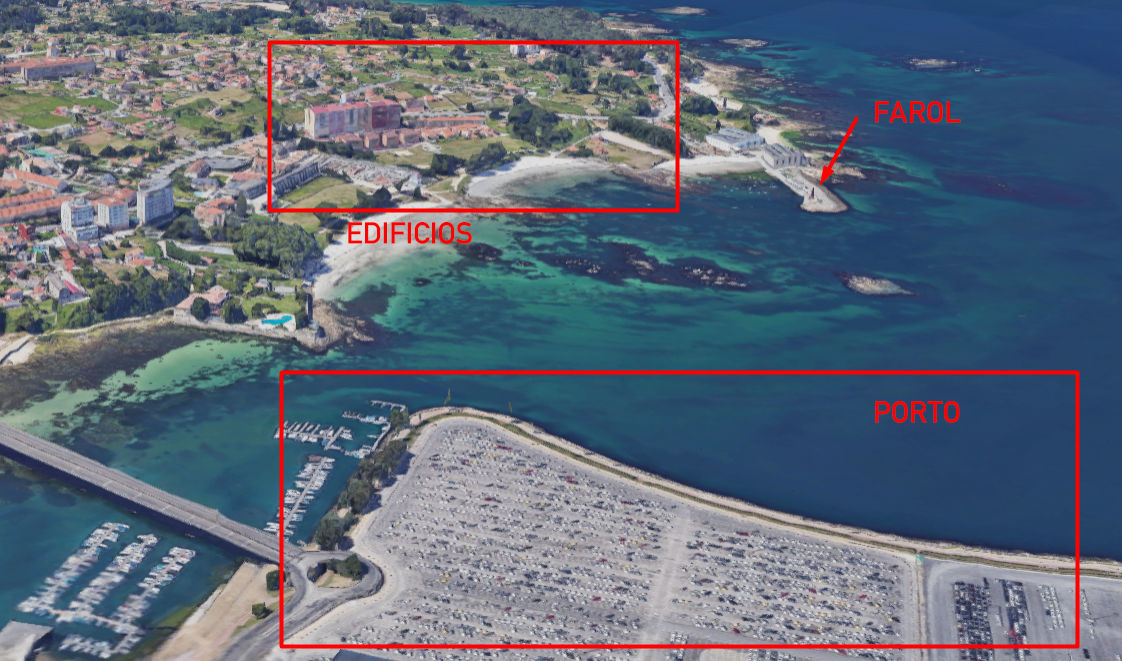 I'm not saying with full conviction, It's just my opinion. If you check out the google maps prints I made for some comparison, you might be able to confirm what I said. Let me know what you think

by plinio.lisboa.br
Congratulations on the investigation, I also really believe that these cities are.

Well i will make a little glossary here of the words in portuguese in english translation to understand huh the posts of our young friend from Portugal:
Glossary
Portuguese = English.

by Evil_Jason
Sounds very plausible...
You are hired to check the next screens for ETS2 / ATS!!

by daniel_bel
I also agree, your explanations are convincing...
Thanks for your time for investigations.

In the blog post comments somebody said the images contains too the PSA group car factory in Vigo; and he was very convinced because he lives there.

Regarding the ports, at least two can be differentiated on the pictures.

So, that could mean we are going to have no less than three car manufacturing plants and 2 dedicated logistic ports in one single DLC; not bad, not bat at all. And there's still room for SCS to include the Iveco factory near Madrid altogether with the release of a new Iveco for the game this year (didn't said Pavel on Christmas Stream they hope to release 1 ETS2 truck this year?)

I agree too one detail some people has commented and it's that those yards full of cars are 3D scenes with a very big load of polygons; so those pictures could be somewhat an evidence about an increased performance they are achieving on their internal tests for the new graphics.

by daniel_bel
Are we sure they're all high poly? As far as I can see trucks have no access to cars zone.
Maybe only the closest cars are AI quality, the rest can be low poly, and anyway, with the LOD in action they will be "easy" quite rapidly.

Traffic mods like Cip's have quite a lot of vehicles and they say it's not that hard on fps.

by Joan93
I hope the SEAT factory will be included in this DLC, as it is the biggest car factory in Spain (the Audi A1 it's also produced there): 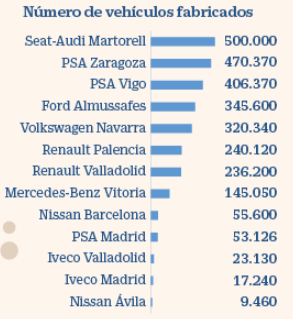 And also because SEAT is the only brand that has an R&D center in Spain, that means a lot of people involved. SEAT its really important in and for Spain.

by daniminho
@plinio.lisboa.br Thanks for the translation! I made those prints to post on a Portuguese group and only after I thought about posting here

In the previous post abou the Seaports I was able to identify one in Spain (Valencia) and two in Portugal (Lisbon and Sines)!

@Some newbie driver I saw that comment too. I could identify the Vigo one, but there's another screen that I wasn't able to tell wich one is. By those round tanks in the horizon I thought maybe it could be Bilbao Port, but when looking at google maps didn't looked a match. I also checked Ferrol and Santander but I don't think it's a match either. It can be maybe in the Mediterranean coast. Let's hope for it, it would be great having more car/truck factories like Volvo and Scania in Sweden!

@Joan93 We can't tell anything yet in my opinion. These are some sneek peeks, for the factories I could identify, we can say that none of them are the "main" in Spain. Maybe they're saving the big ones to reveal further. We just have to be patient!

by plinio.lisboa.br
@Some newbie driver
good morning good morning good morning to all in fact I just marked you because your comment is very important when you said that about those round tanks on the horizon I use to state that they are petroleum coke storage tanks What is a product similar to only coal that is made from oil and it has a greater heat generation capacity and is widely used in the steel industry to increase the heat potential of coal and many steel mills use it exclusively to generate heat I suppose since coal it seems that production is in extinction.

I discovered it during the night too and I want to share Portugal has at least one company that produces trailers in the city of Leiria to discover the wind and the dawn and it's really cool to know that. TL TRAILERS.
All times are UTC
Page 59 of 155