Vojta said what the update is on page 56
Top

Looking for the latest knoxx Renault Magnum tuning pack that works with 1.38, does anyone know of such a download?
'Crack On to Macon'

One Renault Magnum, one tin shed for a garage, 520 horses under the right foot and a donkey behind the steering wheel
Top

FMOD first issues in ETS2, in high traffic environment with lots of traffic sounds around, my truck's sound started to cut off. I am wondering if the priority that we can set in the master track in FMOD set to highest would help. I would prefer of course that in case of FMOD incapable to play all sounds to keep the sound of the truck and cut off some other environment sounds inclusively some traffic sounds if needed...

Question to SCS.
When will SCS finish the upgrade moding guide documentation?


Editor
many other features, TBD

Any example for "separate sound" for "suspension sounds "per truck"

Will Sound page be updated in this year? https://modding.scssoft.com/wiki/Docume ... gine/Sound
Still nothing from March.

would you let them finish implementing FMod first ?

do you even know what TBD stands for ? it means "to be defined", they are themselves not sure if the features are finished for their purposes or needs tweaking still

OK, I have never stressed SCS to give us all the templates and guidance for sounds, but now I kindly ask SCS and their FMOD experts to reply to an essential question regarding FMOD
in the video recording below we can see starting at minute 0:45 and until 1:02 how FMOD is struggling to keep the sound engine of the truck working and it is continuously cut off (note that the acceleration pedal is pressed all this interval and we should hear the engine sound) it seems that at high traffic density of Ai traffic, each with their sound, there is a problem. the problem never happens with low traffic density where there are less simultaneous sounds, also it may not happen with only default traffic sounds edit: it is recommended to listen at headphones!

the question for SCS is if the option "Priority" at master track has any relevance for FMOD in deciding whether some sounds are most important than other sounds from other banks. I noticed in the Peterbilt 579 official template that highest priority has been used so I am wondering if for traffic sounds, and for which we do not have a template, you have used the medium priority or maybe low priority? what would happen if both mods traffic and truck engine would have medium priority, which one is affected? many thanks! 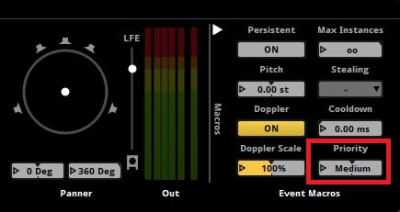 Just while awaiting any SCS dev answering @cip... Have you tried to change it? I mean, to take the sound of that truck whose sounds are being cut, change it's priority to maximum and see what happens in a similar situation?

I mean, the fact that game couldn't catch all the different sounds to be played is coherent with the CPU mono-core bottleneck. The time frames in CPU that FMOD thread can reserve have to be limited or it could cause lagginess in other parts of the game (FPS drops, lack of controls responsiveness, AI going really crazy...). So, if too many sounds have to be precessed, the FMOD will be unable to handle them all and start to cut out those with less priority.

And the guess you made about that FMOD parameter seems probably right.

So, even without an official answer, that should had to be "easy" to check by yourself, right? If your guess is right, you will have to notice a change (unless SCS had done it very wrong giving max priority to traffic sounds in their banks).

@Some newbie driver as usual many thanks for your comment! the way as FMOD works is the following: we cannot load a sound mod in FMOD, without the project (containing the .fspro file). A sound modder do not have to share the project because anybody would be able to load it in FMOD, change one sound and reupload claiming as an improved version of the original and the community is full of sound mod thieves unfortunately

and again unfortunately, without the project we won't be able to see which technique has been used, which priority, etc. we can only ask the sound modder.
SCS did not provide a template for traffic sounds yet, but in my sounds I used medium priority judging that truck engine sounds have high priority (SCS used highest priority in their shared template for Peterbilt 579), but we cannot know if truck engine sound modders used the same high priority, perhaps a kind of code could be kept and all truck sounds should have highest priority, traffic have medium priority, etc.

edit: small complementary info: I do not have this in ATS with even higher traffic (ATS cities are better regarding density) so there is a hope that is only a matter of FMOD.
moreover this time I have a bad-ass I5 9600k CPU so no more CPU issues for me

edit2: an interesting fact, the peterbit 579 template for 1.37 had medium priority and in the one for 1.38 SCS switched to highest priority. without proper guidelines it is possible that sound modders did not notice this change
Enjoy driving with my Real Traffic Density for ETS2 and ATS
Enjoy listening my ATS Real Ai Traffic Sounds 1.36-1.37
currently on strike

But @cip, even if you don't have the project of that truck mod, nothing prevents you to do your own (you could simplify it a lot just for testing purposes) or take another project of anybody else who would shared it.

Of course, in the meantime to do all of that, some dev could already answer your question; but there's no guarantees on that.

And even with that nice CPU of yours, the problem remain the same. All those actual beasts rely for their raw power in the multi-core. In single core performance there's very little difference unless you take real beasts CPU overclocked to death. Single core performance is almost stagnant on past years (compared with, let's say, a decade ago). And most of this improvement comes from improvements in the processing efficiency of the instructions rather than from clocks (AMD has improved in clocks but Intel is suffering their anchor on 14nm, no matter how many + they add to the name).

So, while games that move to multi-core can greatly advance and be every year more awesome in every aspect; games like SCS ones that are anchored on the mono-core are suffering a lot in comparison. They can't rely to gain so many more performance due the hardware improvement of they player base within the years because this improvement is a lot slower than had been before. SCS needs to change that ASAP, I'm sure they are working already on it. But it will take them still some years I fear.