Which area should be reworked ?

Which area should be reworked ?

Hello everyone, welcome to the "Which area should be reworked" thread

I'm creating this mainly because I've been thinking a lot about this recently.

It is known to every ETS2 player (At least most of them i think) that quite a decent amount of the "vanilla" map is from older SCS games like ETS, GTS and UKTS. And most of these areas, when compared to current DLC's like France, Italy, RttBS, BtBS, Scandinavia and the future Iberia, they lack a lot in details and accuracy to it's real life counterparts. The objective of this thread is to discuss which area needs a remake the most and also post stuff that might help SCS for future reference. This is not a thread where you vote on the one you want the most but rather one that you vote on the one that needs the most.

Things to be discussed:

- What area needs a remake the most
- What cities can be added to a certain country
- What features you'd like to see in case of a remake
- Which roads, industries and other aspects can also be implemented into these places 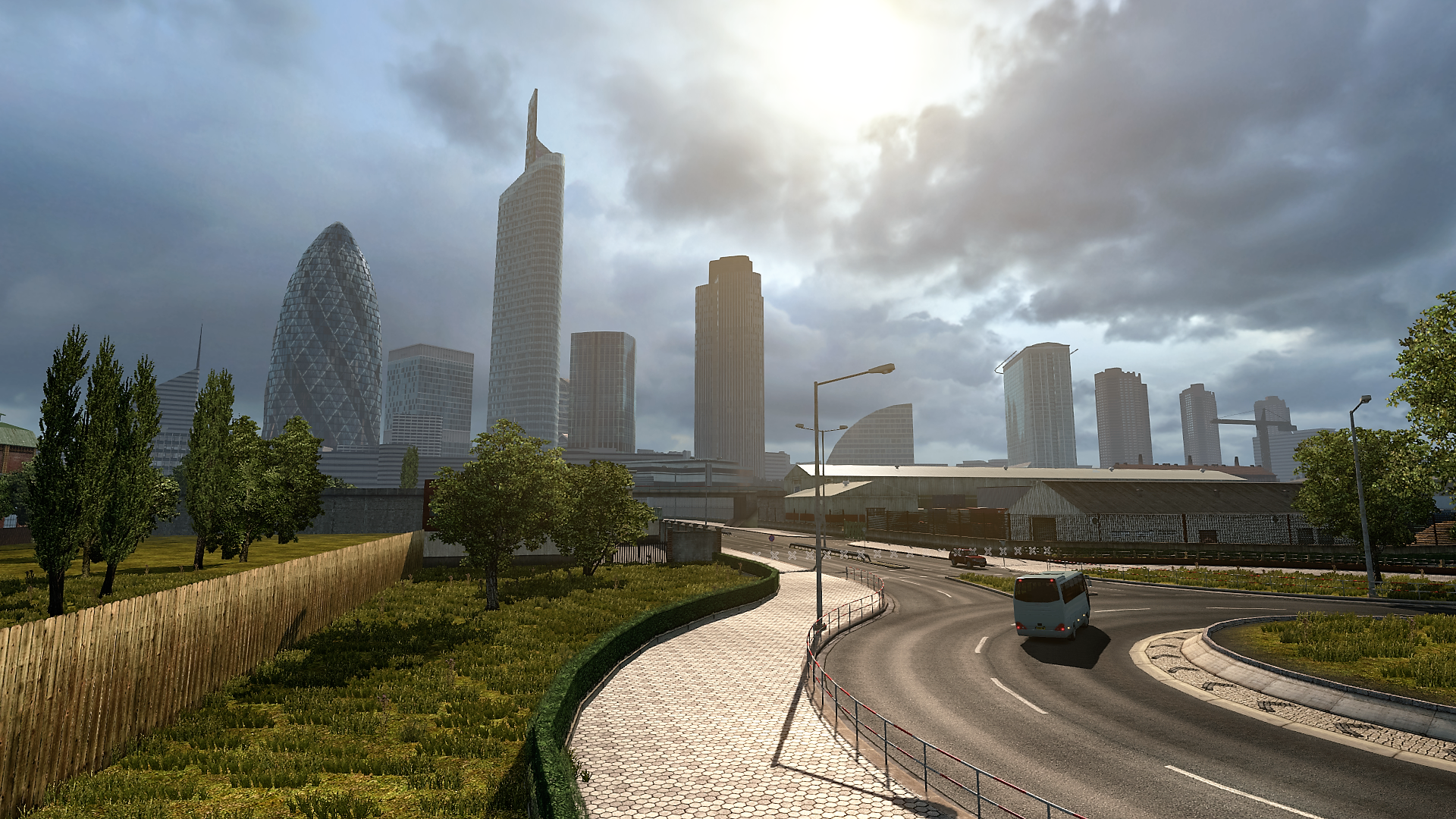 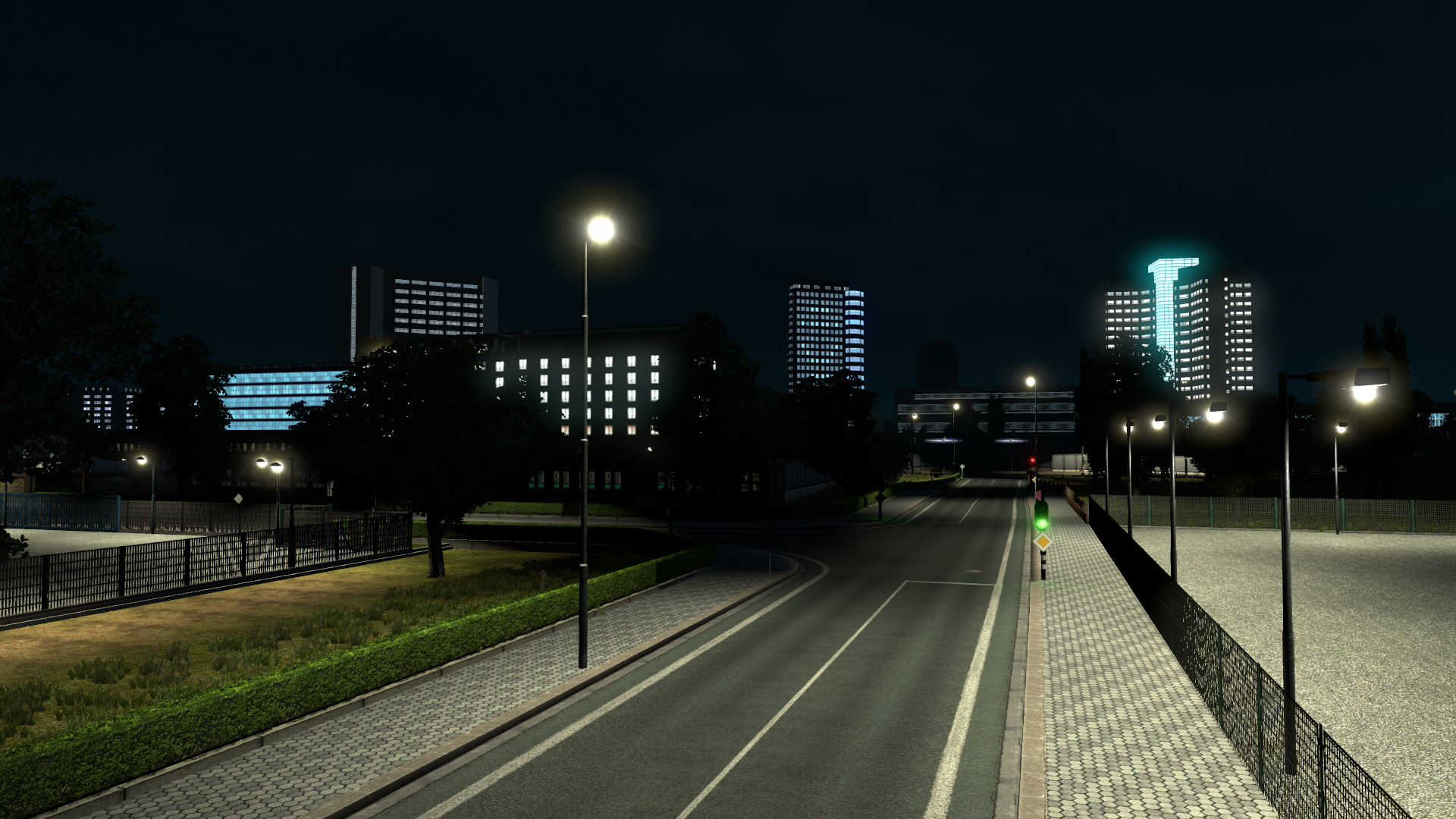 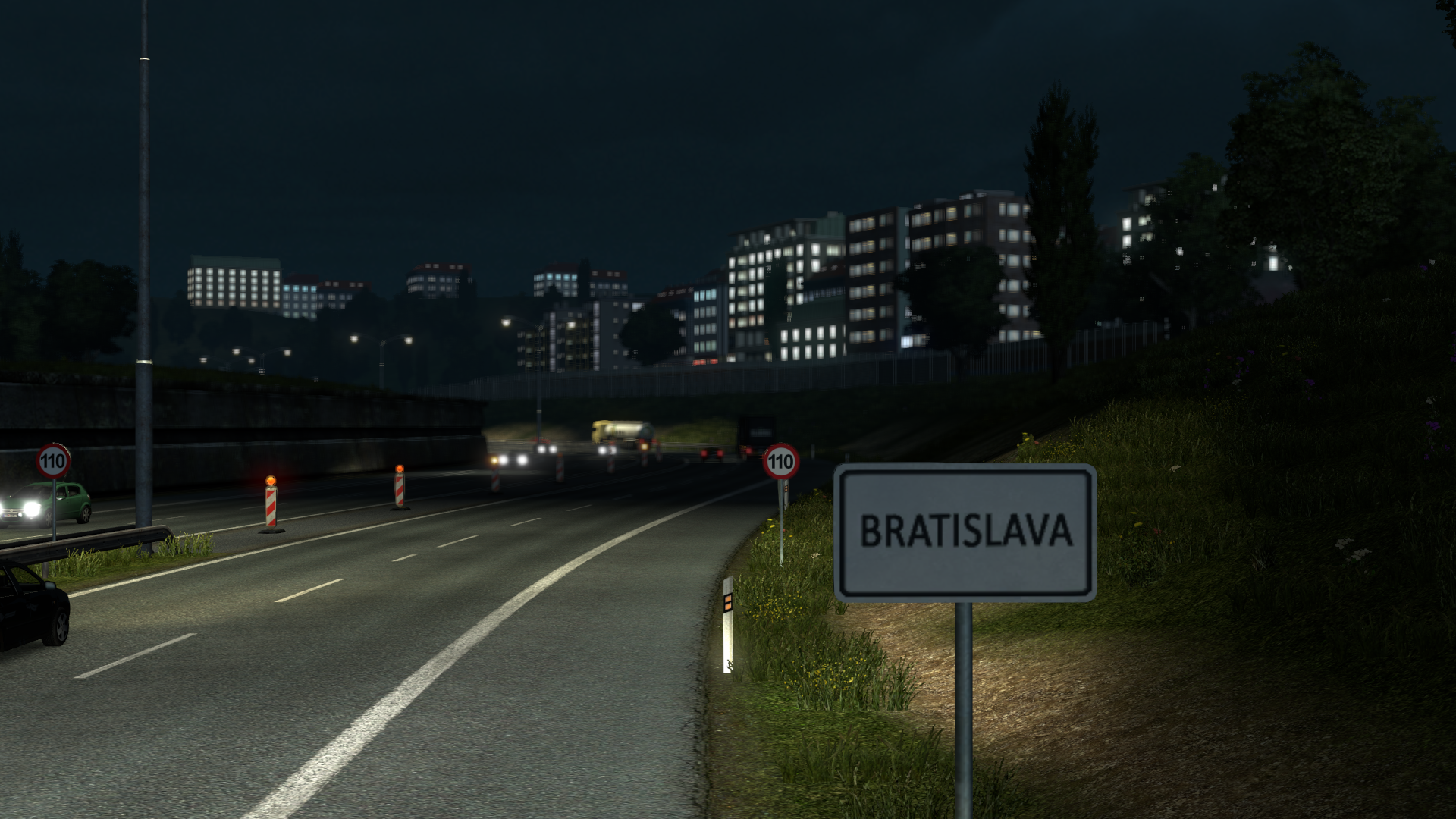 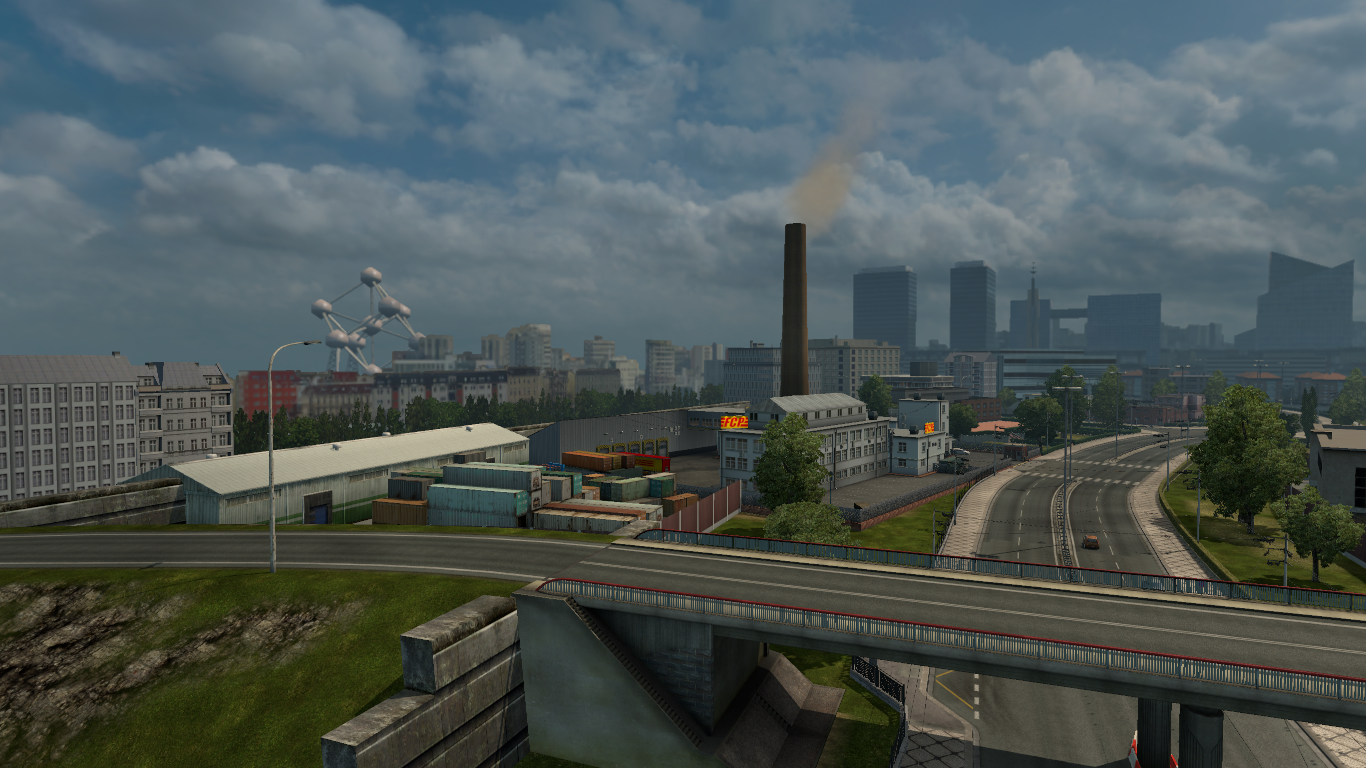 My choice for a remake would be Netherlands/Belgium/Luxembourg, this area connects the northern part of Germany and France and when you go from newer parts of Germany to the newer parts of France during a delivery, the quality difference you experience when travelling through this path is very overwhelming. Given that Calais is receiving a new look in the upcoming 1.39, the difference will be even more noticeable. This part is pretty vital if you're travelling from one end to another in the northern portion of main Europe and you'll also drive through a great portion of it if you pick a job in Italy to UK.

In case of a remake a lot can be done in this area, the main thing that comes to my mind when i think about this, it is the DAF plant in Eindhoven, it would bring some diversity in truck manufacturers and it would give people another option to choose regarding truck transportation besides the Scania and Volvo factory from the Scandinavia DLC. The Netherlands is famous from it's Bulb Fields, Windmills, Cheese market, innovative water-management, Canals of Amsterdam... all of these can be added. Plus, new cities can also be implemented to fill in the gap in the map. 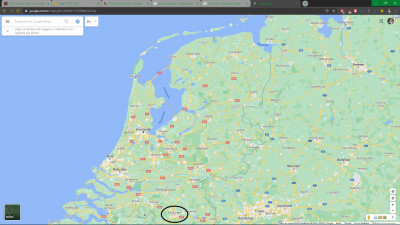 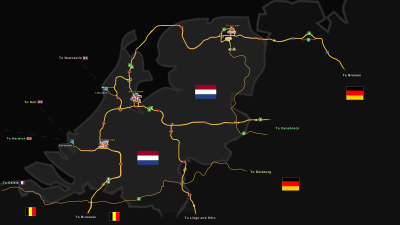 Belgium could use the addition of companies that provide typical products. This country is know for it's vehicle exportation, chemicals and farmaceutical products, machinery, diamonds, food and livestock, textile products, iron and steel. I would say this area could have some more cities implemented to it, but the space is very limited and due to the map scale it wouldn't be very realistic to have a city so near the other. 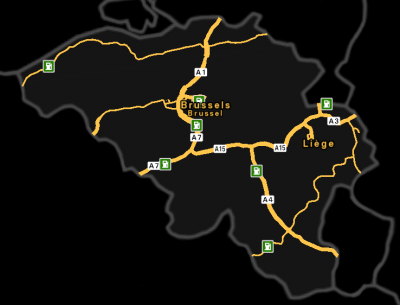 Luxembourg on the other hand is so small that makes any addition very tricky, but typical products would be a nice thing to have. Though small, it produces an impressive array of regional foods. Especially notable are the cheeses, such as the soft spread 'kachkeis', and a wide variety of meats, including Judd smoked ham and Riesling pâté. It also has its own national dairy company, Luxlait, which produces high-quality dairy items. (A similar named company can be added to this country, just like Aria on Scandinavia DLC.)

Anyway, feel free to second what i said above and also feel free to disagree, but if you do, please explain why.

The Germany rework was put aside as a secondary project without much priority, France is nearing the finish with only Lyon missing. And as the topic title asks, which area should be reworked next ?? Vote on the poll.

well mostly people are thinking UK is next after SCS is done on Germany.. Tho not sure now because Moh said It "might" be on hold or so he said. So right now its a waiting game to see if they will finish reworking Germany.
Top

I read about it and from what i understood, the project is on hold because afaik the guy responsible for it no longer works for SCS.

As much as the base map needs to be reworked I think SCS should focus on the UK because the map of the UK is 10 years old because it is from UK truck simulator and say if Ireland came out next year and the UK hadnt been touched it would not blend in well. I feel whenever SCS do Ireland I think thats when the UK reworks will come in because Ireland isn't really that big to do. What would be great is the companies in every city in the base map to be scattered around just like the ones in the newer map DLCs it's kinda a shame they haven't done that in the cities that have been reworked but then again I understand that it will be more harder for them to do.
The Hi-Way is hyped. Release Iberia so the Hi-Way can take time to discover more beautiful scenery!

interesting thread, well... I dont know what happens after germany reworked is done, we will see it

for now it is like this - They finish all the cities that need rework in France so France is done for the new Iberia DLC -> then complete Germany -> then UK, and maybe sync in with Iceland/Ireland DLC -> then Austria which is almost as old as Germany -> then the other base game countries and Going East DLC.
Top

It will all depend on which one will be the next DLC.

If Western Balkans, then we probably have the final Germany rework and luckily an Austrian too (they will have to add zones to the map anyway to link the new DLC, so they could seize to work on the surroundings)
If the next DLC is a smaller (than others, specially than Iberia) Ireland DLC; then the most logical could be to rework UK seizing that they will need not so much people devoted to the map DLC.

Austria and Switzerland, they are feeling and looking like Stone Age and they are important for drive through traffic.

First, all highway junction there needs to be replaced with the real ones.

Austria: Especially the Wiener Ring needs a complete rework, the Tauern Autobahn (A10) needs be fully implemented, add the Nord/Weinviertel Autobahn (A5), rework of the Inntal Autobahn (A12).

Switzerland: Especially the A13 should be added, rework of the A4

Beside that, Luxembourg needs a (direct) connection to Germany. Very unrealistic actually.
Top

I hesitate to vote since I really dont know which one to choose.

- From a practical standpoint, the UK BADLY needs a rework. Think about how many people on YouTube try out ETS2 for the first time and they always go for London or some other part of the UK. From a marketing standpoint, the UK rework should come with the Ireland DLC. That way you can market both things at the same time and create hype. But I cannot vote UK until the Ireland DLC is confirmed.

- From a personal standpoint, I would like Eastern Europe to be reworked, since that is where I spend most of my time. Going from RttBS to BtBS can be very tedious due to the drop in quality. But I cannot vote for it, since it's a very biased approach and we need to be more practical.

- Benelux and Austria/Switzerland are a bit interchangeable for me. I would like both of them equally but they are also easily avoided (unlike the Eastern ones). Maybe Austria/Switzerland is a bit higher on my list due to the potentially awesome scenery but I cannot vote for either at this point.

Hopefully, the next DLC will be announced roughly the same time as Iberia last year and then I can make a proper vote.
Top

after germany
1) I would prefer that the benelux be built first
because I often go from France to Germany and the Scandinavian country via the Benelux and I would dream of spending this trip exclusively on beautiful realistic roads.