Look at the interesting thing on the @ AlexxxF1, map. 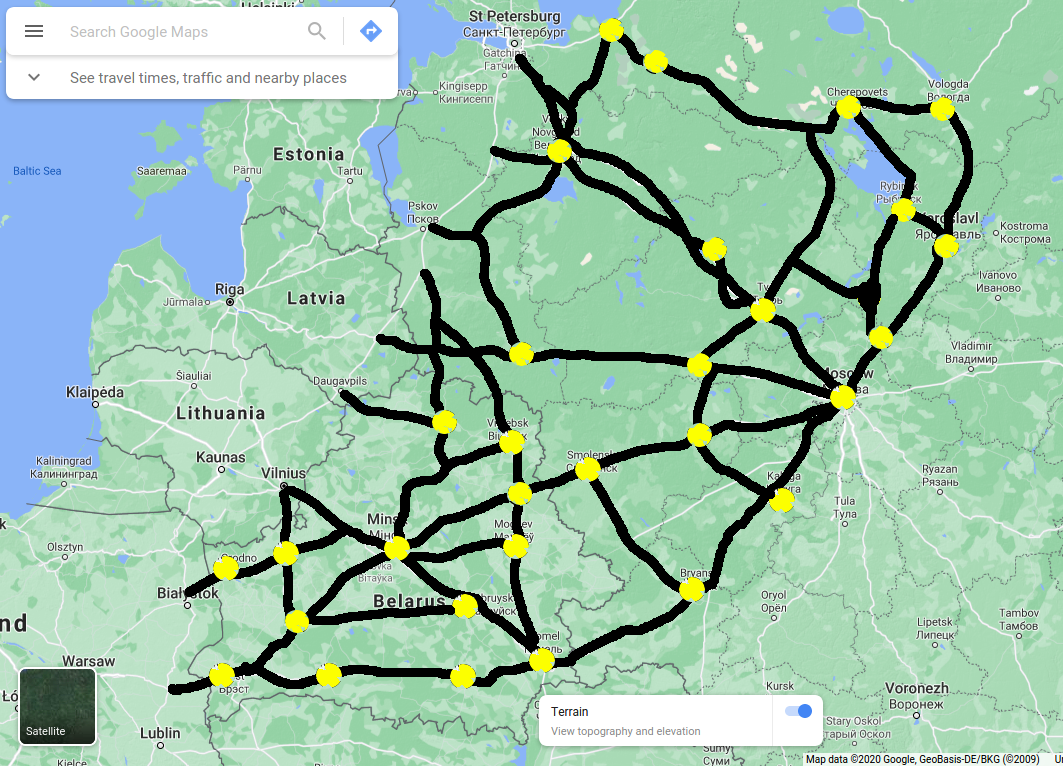 For me it is quite realistic too!
It would be a very coherent DLC, which could actually be called "paths to Moscow". Why the general sense of this road network leads to the city of Moscow.
It would be very interesting that SCS Software was making this road network, with these basic cities, and these countries to Belarus and another part of Russia, including Moscow. It would be really cool I liked this concept map.

I will allow myself to do just one update to complement:

Note that the eastern part of Moscow is excluded from the concept map, opening up the possibility of another DLC in the future.
Perhaps "paths to the Urals" (including the eastern exits from Moscow).

It is also quite interesting that it leaves the south of Russia free to be another DLC, perhaps "Sarmatia DLC: between the Volga and the Don" (south limit the banks of the Don and Volga Rivers form a good limit Another limit to the north would be Moscow, south exits would be part of the DLC).
And it also leaves Ukraine a little outside, in which the country itself allows itself to be its own DLC, with the title perhaps "Paths to Kiev".
Perhaps another later DLC "routes to the Caucasus" (southern Russia borders to the limits of the River Don and Volga to the north of the Map).
Lastly; Caucasian DLC: Sakartvelos (ex-Georgia), Armenia, Azerbaijan.
Top

yep, one Russia takes 40% territories of all Europe.
even in 3 DLC can't fit in. be like in American Truck Simulator) divided by state) only it's will be Russia) Truck Simulator)
Top

To be honest, this is the first time that I'm not excited about the next map expansion.

For now, based on teaser screenshot back in October it looks more or less same as Beyond the Baltic Sea. All due respect but until I see more pictures in 2021 of this new DLC I'm not really interested.

I would be more interested if it was Ireland or Western Balkans.
Top

YugoDriver I understand you) you from Republic of Serbia. Ireland or Yugoslavia with Greece we will see in 2022 )
just be patient)
Top

some players theorized that SCS will want to take a break after Iberia, and so will develop a simpler, easier to make DLC. If you look at a real geographical map of Belarus, and Russia until Moscow, it's all plains, and they have tons of ready assets already, which might be the reason why they are rolling with that DLC for next year.

Is it going to be boring? probably as much as the Baltics are. I don't mind driving through the Baltic, I'll welcome new places to drive to. But I too would have prefered western Balkans, or Northern Scandinavia.

Well, it's not just because I'm from former Yugoslavia.

The good thing about waiting for SCS development is that by every year they are advancing in technology and quality. Same here mate @dahaka nothing bad with flatlands but it's kinda getting boring after 3-4 times passing same scenery.

As a map developer, I'm getting through assets browser in the map editor and yes they have like a ton of assets already done for Ukraine, Belarus and maybe Moldova. Until they officially announce what new map expansion include we can't exactly calculate the size of DLC in roads and cities.

Based on that maybe, but just maybe we could get two map DLC's, I'm saying this just because we still don't know what is included in 2021 DLC.
Top

I think it was @Shiva, when the teaser of that future DLC was published, who explained a theory that I found interesting.

Simplifying, he said that if they don't start to make DLCs in Eastern plains now, alternated with DLC in the other zones left; soon SCS would had nothing more to do than one Russian tundra DLC after another. And it's right, the clearly interesting parts of Russia to be mapped worth almost 4 DLCs counting the one next year if all our guesses are right. That means up to 8 years if they alternate them with other obvious places the game lacks (Western Balkans, Ireland, Fennoscandia). They need to start mapping that zone ASAP to avoid having to go 2 or 3 times in a row to the same zone.

Even if that was the case, they got other interesting places to expand to as well. Morocco would be one, rest of Turkey would be the other.

Personally I wouldn't mind getting 4 russia DLCs back to back, as long as every other European country is represented.
But it's a possibility I guess...

Maybe you and me wouldn't mind that; but I'm sure that as like people is "another ATS news now?" there would be "another Russian DLC this year?"

It's a question of variety. On shot of Russian plains now, one show of Balkan mountains next year, one shot more of Russian plains, one of Irish and Scottish whisky later and so on (as a pure hypothetical example)

I found this option pretty plausible and more or less aligned with what SCS had been doing all those years.
Top